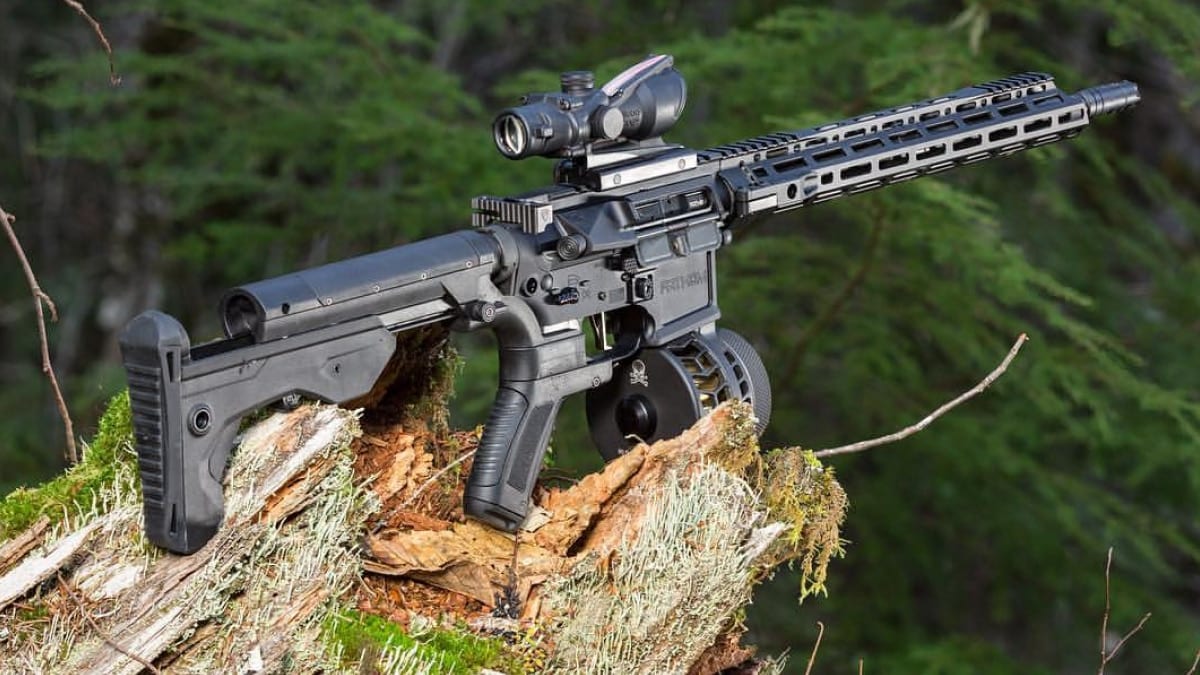 A Slide FIre Solutions bump stock attached to a semi-auto rifle. Under a pending rule change, this currently legal set up could bring possible punishment of 10 years imprisonment and/or a $250,000 fine. (Photo: Slide Fire Solutions)

A pro-gun group on Wednesday joined forces with a popular YouTube gun blogger to take the federal government to court over a pending ban on bump stocks.

Gun Owners of America, in conjunction with the Virginia Citizens Defense League and bump stock owner Tim Harmsen– who helms the Military Arms Channel– filed suit in a Michigan federal court this week just after the final Bureau of Alcohol, Tobacco, Firearms and Explosives rule outlawing the devices was published. Set to take effect in March 2019, the ban will establish a prohibition on bump stocks without a path to legal ownership for those currently in circulation and make possession a felony.

The 28-page filing points out that, going as far back as the Akins Accelerator in 2002, federal regulators have consistently charted the same course when it came to bump stocks and similar devices sent to their Firearm Technology Industry Services Branch to review for legality, holding that each, in turn, was not a machine gun. The final rule posted on Wednesday is an about-face, equating a device that “mimics automatic fire” on a semi-automatic firearm with actual automatic fire.

“ATF tossed its entire 17-year history with bump stocks into the trash bin — overriding the considered judgment of at least one ATF Director, four Assistant Directors, and five Chiefs and one Acting Chief of the Firearms Technology Industry Services Branch,” says the complaint, holding “The final rule attempts to discredit the agency’s own work.”

While up to 520,000 of the devices are believed by the ATF to be in circulation, making them a niche item compared to the millions of gun owners in the country, those who filed the lawsuit seeking to upend the ban say it is part of a larger fight for Second Amendment rights.

“These dangerous regulations can go much farther than just bump stocks,” said Erich Pratt, GOA’s executive director. “The goal of the anti-gun left is, ultimately, not just banning bump stocks, but, rather, putting ‘points on the board’ toward its goal of banning civilian ownership of all firearms.”

Besides the VCDL, Pratt’s group says two other state-based pro-gun organizations, the Oregon Firearms Federation and BamaCarry, are helping financially support the case.

Harmsen, via social media, argued that the ban and its surrender clause violates Fifth Amendment protections on private property. “For those that would say, ‘Let them have the stupid stocks.’ It’s not about the stocks, it about liberty and the rule of law,” he said. “You can’t retroactively ban previously legal items and force people to destroy or surrender their private property that was purchased legally.”

Harmsen, a GOA member, has 870,000 YouTube subscribers, and over 143 million views of his nearly 800 firearm-related videos. He is also a founder of Full30.com, a firearm-friendly social community.

The GOA’s lawsuit is at least the third seeking to invalidate the government’s actions on bump stocks, following in the wake of two filings in a Washington D.C. federal court by the Firearms Policy Coalition– one against the ban itself and a second, entered this week, against Acting U.S. Attorney General Matthew Whitaker’s ability to sign the rule into law in the first place.

“Mr. Whitaker’s designation as Acting Attorney General violates both the Constitution’s Appointments Clause . . . and the applicable statutes,” the new FPC filing argues. “Thus, he was not authorized to sign the Rule, and the Rule cannot go into effect without violating the Administrative Procedure Act (APA) and irreparably harming Plaintiff and its members.”