Famous 'Trumpeteer Carbine' Used at Little Bighorn up for Auction

The carbine believed once carried by the man sent by Custer with the famous “come quick” message to bring reinforcements to the Battle of Little Bighorn in 1876 is now up for auction (Photo: Morphy)

Described as one of the most historically significant American guns on the market, the forensically confirmed carbine of a 7th U.S. Cavalry bugler is headed to auction.

Morphy Auctions next week has a U.S. Model 1873 Springfield single-shot carbine chambered in 45-55 (.45-70) that has been tied to John Martin. Martin, an Italian immigrant named Giovanni Crisostomo Martino, cemented his place in history as being “The Last White Man to See Custer Alive,” as he was dispatched at the beginning of the Battle of Little Bighorn in 1876 by Col. George Armstrong Custer with a message to bring urgent reinforcements.

Although Martin never made it back to Custer’s position until after the battle (he apparently lived until 1922), his carbine, Serial No. 19573, somehow stayed behind as he rode for help and a fired cartridge later recovered from the battlefield was forensically matched to the gun as part of the Custer Battlefield Firearms Identification Project. The project, which reportedly ran from 1984 to 1996, cataloged some 2,000 recovered cartridge cases and bullets and one matched the firing pin marks on Martin’s rifle.

Scratched into the rifle is “J. MArTIN,” and the “H” – presumably for “Company H,” the orderly bugler’s unit. 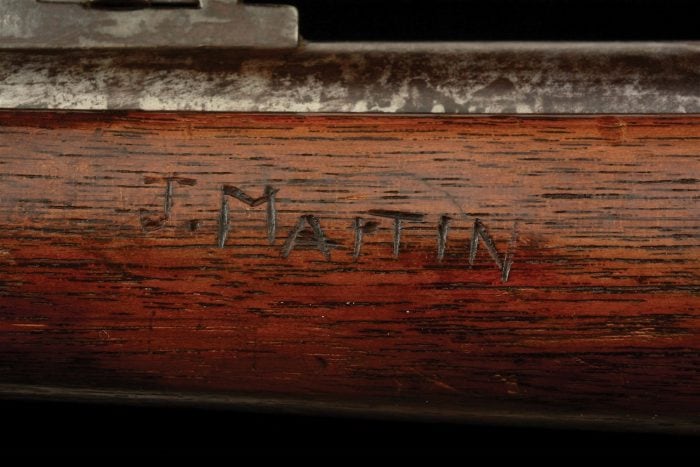 The Trumpeteer Carbine has what is believed to be Martin’s name carved into the furniture with the theory that he possibly handed it off to a fellow trooper just before he rode off for help on Custer’s orders. (Photo: Morphy)

“This is one of the only forensically identified trapdoor carbines fired at the Battle of Little Bighorn that can be positively identified to a trooper,” Morphy notes.

The Trumpeteer Carbine, which was featured on the cover of the book, The Trapdoor Springfield by John Langellier, carries a $90,000-$140,000 estimate. It heads to the block as part of Morphy’s 1,267-lot auction of rare sporting and collector firearms on April 24-25 at the company’s gallery in Pennsylvania.