Why You Should Consider the Sig P238 as Your Next BUG

The 1911 platform hits that sweet spot of nostalgia and looks for many gun owners. Depending on model and maker, though, a full-size 1911 can be a little cumbersome to carry.

Determined to find out whether the Sig Sauer P238 could earn a spot in my concealed or backup gun inventory, I headed to Guns.com to get my hands on one of the more stylish options. Straight from the GDC warehouse, I put this Sig to the test.

The Sig P238 is a ..380 chambered semi-auto built on the 1911 platform. Featuring a “micro-compact” design, the Sig’s first impressions are that it’s tiny. Measuring just over 5 inches in length with an overall width of 1.1-inches and a height measuring 3.9-inches. It packs a total of six rounds in a flush, stainless steel magazine that slips easily into the magwell. 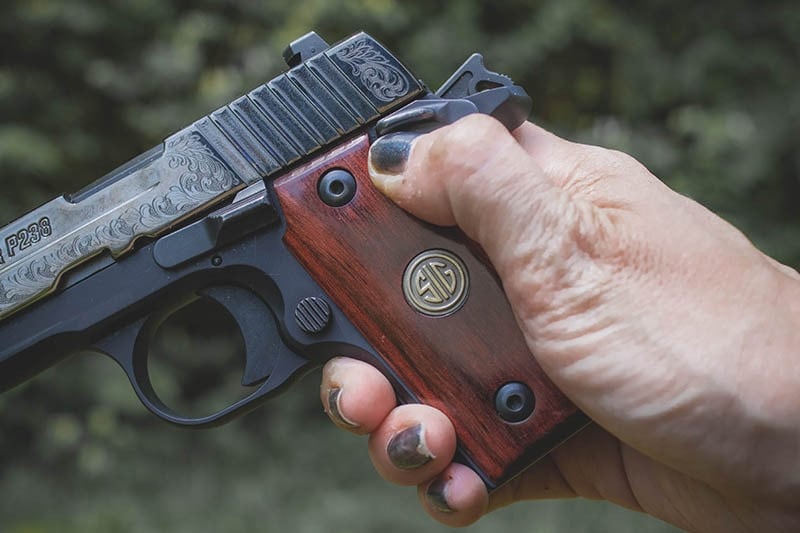 The Sig P238’s manual safety can be difficult to remember to flip off, therefore training is essential. (Photo: Jacki Billings/Guns.com)

Using a stainless-steel frame, the slide comes coated in a Nitron finish that helps prevent corrosion. Though Sig offers a variety of snazzy looking styles, the particular model I chose from Guns.com featured an engraved slide with hard coated anodized frame and Rosewood grips. The Sig P238 definitely captures that 1911 aesthetic with a beavertail frame, hammer and manual safety with the added bonus of SigLite Night Sights.

Let’s be real, .380s are known for their finicky nature. Often preferring a specific brand or grain of ammo, it can take time to dial in exactly what the .380 wants. The Sig, though, is no regular .380. Pumping over 1,000 rounds through this gun in the course of two months, the Sig Sauer P238 never experienced a single malfunction.

In fact, out of all of the .380s I’ve tested in recent months, it’s the only one to boast that claim to fame. Whatever you want to put in the P238, you can rest assured that it will likely fire it with no issues. Evaluating this model as a potential concealment option or backup gun, that reliability is second to none.

The Sig is a smooth shooter for sure. It comes with a single-action trigger set to around 7.5-pounds. While this might seem a tad heavy, it doesn’t feel it while shooting. The trigger isn’t one that will make you recoil from the horrors of pulling it, instead it will have you losing track of time because it’s so much fun to shoot. 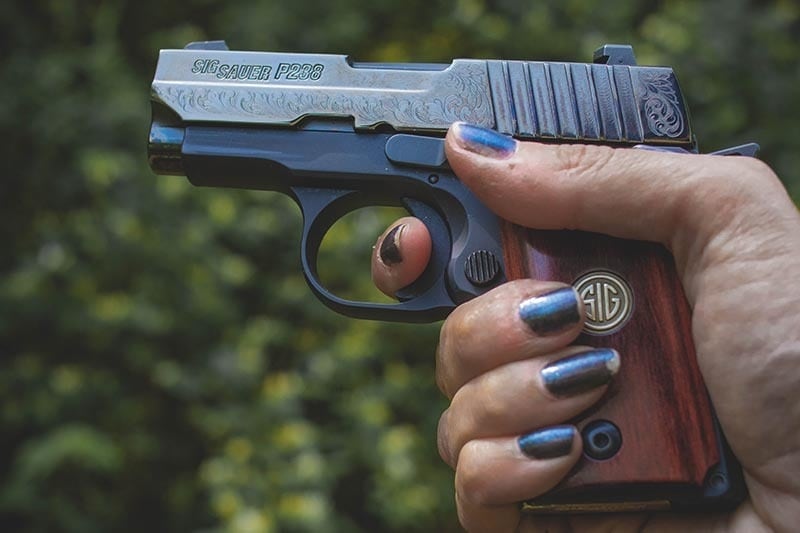 The Sig P238 centers around ease of use. The slide moves easily on the frame with the added help of slide serrations near the rear sight for better gripping. The controls are responsive, effortlessly manipulated single handed. Even down to the magazine, which featuring the easiest loading I’ve experienced out of a handgun mag, is designed to make the user experience better.

Shooting the Sig P238, there’s no issues. Recoil is minimal due to the heavier frame pushing the weight to 15.2-ounces unloaded. The Rosewood grips provide a solid point in which to make contact with the firearm, allowing shooters a good purchase on the gun. Despite its shorter build, it still rests comfortably in the hand. The SigLite Night Sights pop against targets, directing shooters’ eyes right where they need to be.

The Sig Sauer P238 is billed as an option for concealment or back-up gun for those needing that smaller concealment package. The gun itself ships with a bulky outside-the-waistband holster ready to go, but concealers might be more prudent to invest in an IWB rig that can further conceal the tiny gun.

For this review, I ran the Sig Sauer P238 in a Can Can Concealment Holster designed for deep concealment. The P238 fit snugly into the appendix pocket on the belly band style holster. Running drills, I wanted to see how quickly I could access the gun, flip the safety and fire.

While the holster gave me good access, the only issue I found came down to that manual safety. To be frank, I’m just not a fan. Routinely carrying either a Glock 19 or Smith & Wesson Shield with no manual safety, the move to a gun with an external one proved to be an overwhelming task.

I frequently forgot, in the early stages of training with this gun, to flip the safety off which resulted in pulling the trigger with no bang. A win for the purpose of the safety but not when you actually want that hammer down. It took several training sessions and a lot of frustration to get to a point where I semi-consistently remembered to flip the safety as I presented the firearm to fire.

If you’re a shooter already accustomed to the intricacies of a manual safety, you’ll be just fine. However, if you’re new to the concept, it can prove to be a difficult hurdle that requires training to become proficient.

Other than that small issue, the Sig Sauer P238 proved itself a worthy concealment companion. Slipping into the holster and reliably firing when on target, the Sig P238 would make a fine addition to a concealment or backup gun inventory.

The Sig Sauer P238 is a surprising .380, bringing some style and class to the already loved 1911 style platform. Outfitted with a stainless-steel frame, Rosewood grips, SigLite Night Sights and the consistency to back it, the Sig Sauer P238 should be at the top of any gun owners’ .380 wish list. The Sig Sauer P238 retails between $630 and $999, depending on model.