Known as the people’s pistol the Heckler & Koch VP9 is the German company’s answer to the Glock 19 craze. In an already crowded concealed carry market, though, I was curious how the striker fired pistol actually measured up. Spending some time on and off the range with HK’s pistol, I got an intimate look into the VP9 design.

The Basics and Some Winning Features

Chambered in 9mm, The VP9 features a striker fired design measuring 7.34-inches in length and 5.41-inches in height with a 4.09-in barrel. Tipping scales at 25.56-ounces, the VP9 can pack 15 rounds of ammunition in its magazine, offering plenty of rounds for plinking or concealed carry use. The VP9 also sports a small accessory rail for those interested in throwing on a light/laser combo for low-light shooting situations. The rail is a standard in most midsize, concealed carry pistols; but it’s still nice to see on this platform. I always appreciate a concealed carry gun that can double as a bedside home defense pistol. 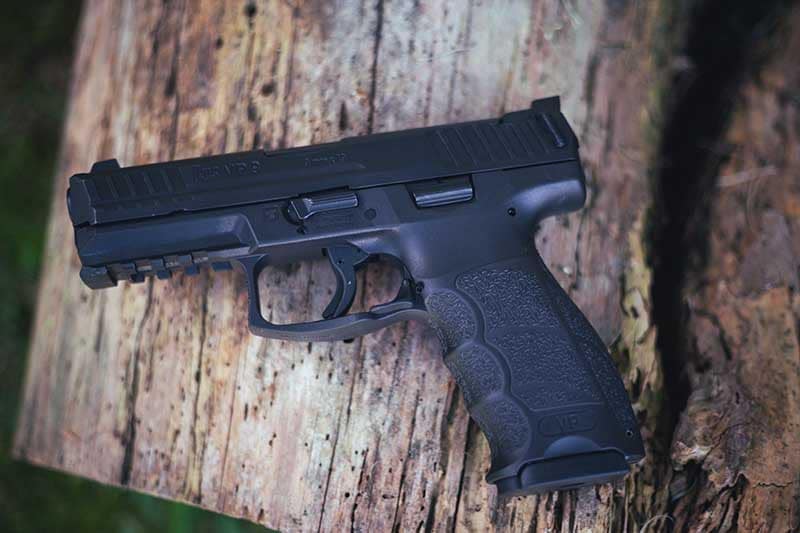 The VP9, known as the People’s Pistol, is a 9mm chambered semi-automatic handgun from Heckler & Koch. (Photo: Jacki Billings/Guns.com)

Outside of the basics, the VP9 boasts interchangeable backstraps as well as side grip panels that easily swap out for a somewhat customizable grip area. Punching out a pin in at the rear of the grip, the backstrap and panels slide out of place. HK provides customers with two other sizes in the back offering three total sizes – small, medium and large. Being a petite shooter myself, I opted for the smallest size. The change was noticeable. I was no longer overcompensating with my grip and the VP9 instantly felt more comfortable in my hands. I love a platform that understands its customers aren’t all built the same and thus provides options to dial in comfort. Versatility is key in the VP9. 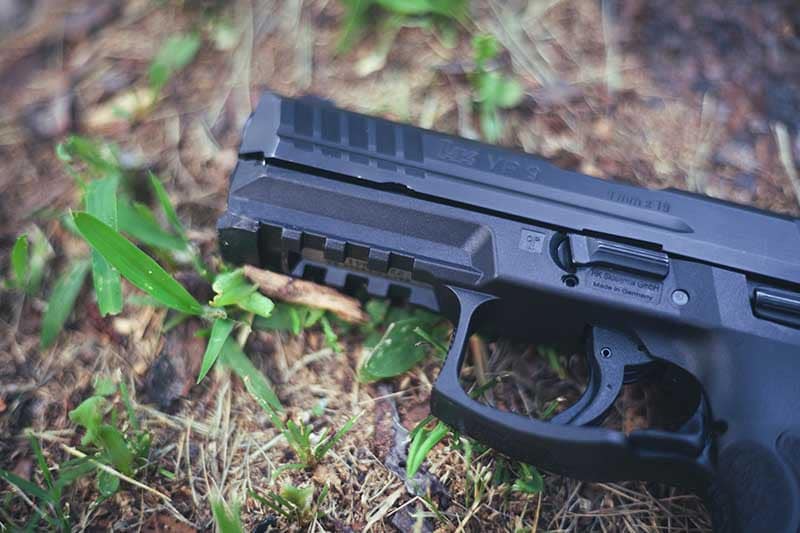 HK could have stopped with the backstraps and still had a winning design, but it continued its features by packaging the platform with a sweet trigger. Breaking around 5 pounds, the trigger brings a smooth, fluid feel that is easy to fire. Additionally, the trigger comes equipped with an integrated safety device that aims to prevent accidental discharges by not engaging the trigger unless depressed.

Normally, the HK sports 3-dot luminous sights; but in the case of this HK VP9, which I nabbed straight from the Guns.com Vault, Trijicon Night Sights sit atop its slide. The sights function extremely well in low light situations and are great even in the middle of the day shooting with the sun overhead. If you can scope out an HK VP9 with those Trijicon sights, grab it up. It makes all the difference!

On the Range and in a Holster

On the range, the VP9 performed exactly how I imagined an HK firearm would – perfectly. It ate several boxes of ammunition and saw several hundred rounds of ammunition pass through its barrel with no stoppages. Even the cheap, dirty ammo that I would never run through my good guns proved no match for the VP9 platform. Having a gun that is not ammo specific and can power through any box is an advantage when it comes down to training. Skipping the overpriced stuff and opting for the more affordable ammo opens the door to extended training sessions that don’t break the bank. 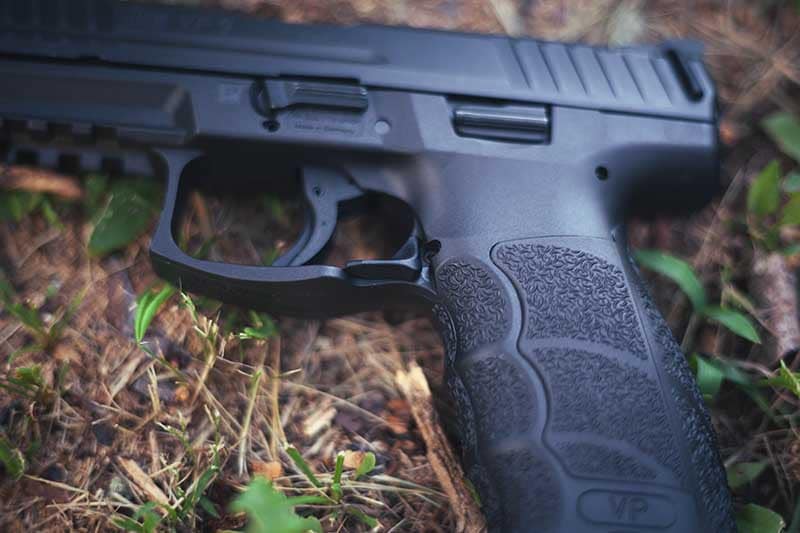 The paddle style mag release can be a challenge to learn at first but does prevent accidental mag release. (Photo: Jacki Billings/Guns.com)

While I appreciated the overall design of the VP9 while firing it, there was at least one area that threw me for a loop – the paddle style mag release. Though my shooting journey started a decade ago with a paddle style release by way of the Walther P22, I am so used to push button mag releases a la Glock, that the paddle style seemed foreign. It’s not a deal breaker by any means but it will be a learning curve for those use to push buttons. The upside to the paddle style, though, is you won’t accidentally engage the mag release while gripping the gun – a quality that even Glock perfection can’t escape. 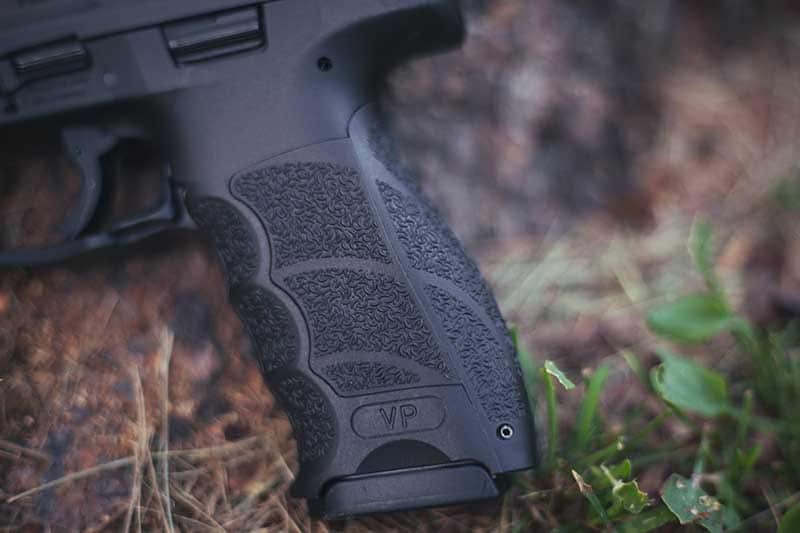 The VP9 uses an interchangeable backstrap and side grip panels to help shooters dial in comfort. (Photo: Jacki Billings/Guns.com)

Speaking of Glock, the VP9 offers a size similar to the Glock 19 offering a midsize platform that can easily accommodate concealed carry. Large and heavy enough to make shooting easier, with diminished recoil, the VP9 also works its way into a holster. Like most midsize platforms, you won’t be sporting a Baby Gap t-shirt, but for every day clothes, it works. The larger size means it is easily accessed on the draw, affording owners no issues while drawing.

With a 15-round capacity, elevated sights in certain models and an ergonomic design paired with a clean, crisp trigger the HK VP9 is a straight-up winner with the only downside coming down to price. Retailing for $562, it is pricier than other semi-auto striker-fired pistols out there but if you’re willing to throw down some extra dough, you won’t be disappointed. Also, it’s worth noting that you can often find it a little cheaper if you’re willing to go the used route.

All in all, the VP9 is a functional, comfortable 9mm pistol with the makings of a great concealed carry gun for those that want to step outside of the cliched Glock box.