Hailing from a time when there were a pair of German states, West German-made Sig Sauer pistols are increasingly collectible.

The Sig Sauer most commonly encountered today in the U.S. is typically made in a series of factories in New Hampshire, where the company has long put down American roots. In fact, according to data from federal regulators, the company produced a whopping 536,636 American-made pistols in 2017 alone, going on to export about a third of those overseas.

However, when you turn back the clock some 45 years, it was a much different supply pipeline. In 1976, SIG (Schweizerische Industrie Gesellschaft) of Switzerland formed a partnership with J.P. Sauer & Sohn of West Germany to begin marketing their guns better overseas. This led to the “Sig Sauer” name.

Among their first exports to the U.S. were the 9mm Sig Sauer P220, which had been adopted by the Swiss Army as the P75 pistol.

These early West German-marked single-stacks were typically shipped over with lanyard rings and European-style heel release magazine latches, features that weren’t changed on American-bound Sigs until later. A lot of those early guns were marketed as Browning BDAs in .45ACP. 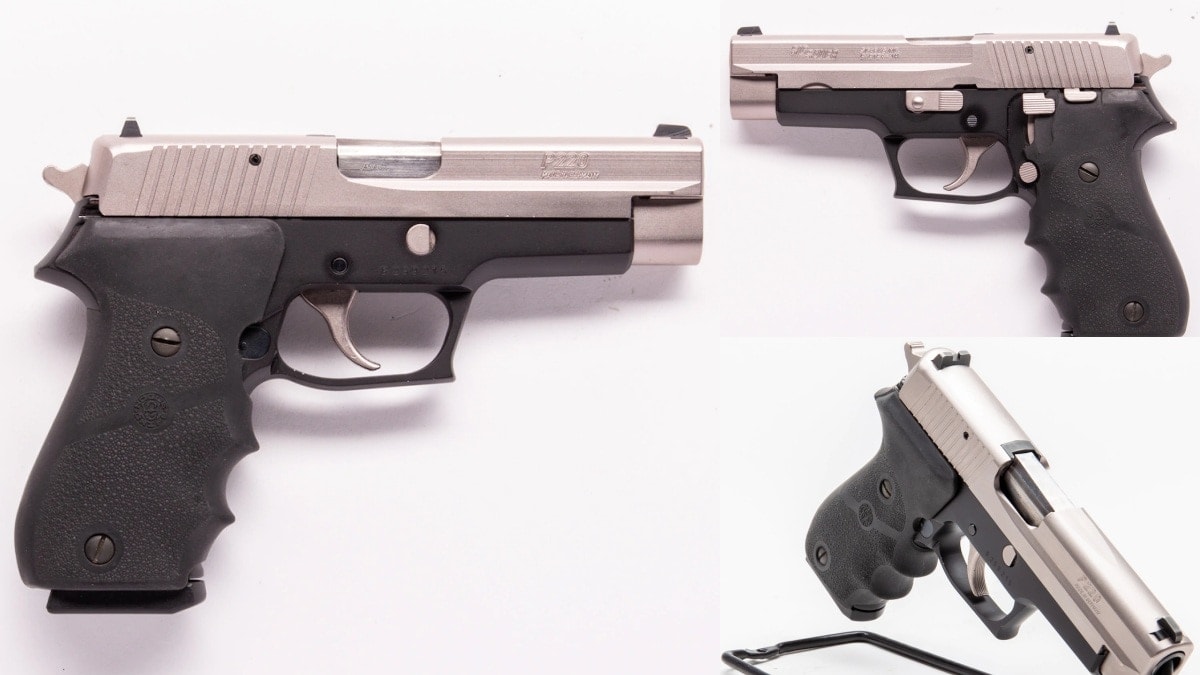 This circa-1999 Sig-Sauer P220 is a two-tone .45ACP model that has had its original grips replaced by Hogue wraparounds. It has West German marks. In the Guns.com Vault ready to go it comes with two seven-round magazines and two eight-round magazines.

By 1985, Sig Sauer was producing a new double-stack pistol that otherwise had much the same layout as the 9mm P220– the 15+1 round capacity P226. That gun was a contender in the U.S. Army pistol trials to replace the venerable M1911A1 .45ACP, although Uncle Sam went with the Beretta 92 in the end, reportedly over cost issues.

In the meantime, the P226 was released on the U.S. commercial market and soon became a hit with both consumers and law enforcement customers. With its 4.4-inch barrel and choice of DA/SA or DAO actions, later augmented by the DAK trigger system, the 9mm was also marketed in .357 SIG and .40S&W. Today, dozens of variants of the P226 are in circulation and the gun is still very much in production– now in the U.S. 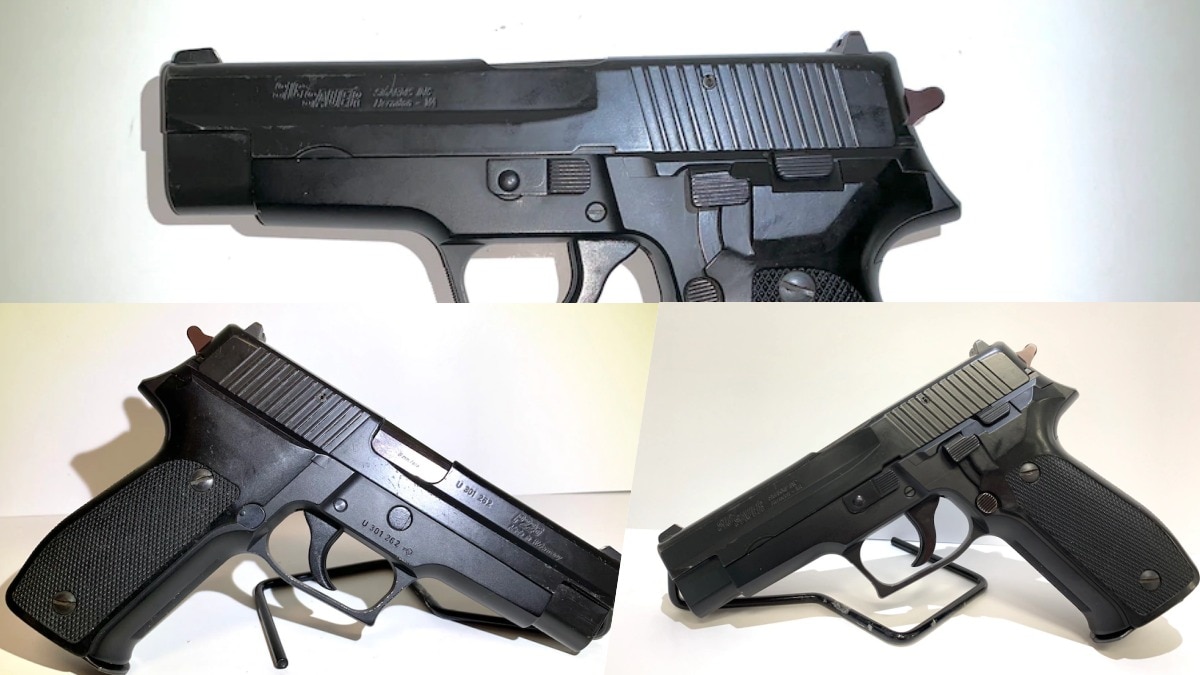 This early West German 9mm Sig Sauer P226 in the Guns.com Outlet program has German Nitro proof marks as well as Herndon, Virginia import marks and was probably brought into the country in the late 1980s.

Vintage “West German” marked P226s, besides their stampings, have several differences from today’s more current offerings. This includes almost pebble-style plastic grips and a distinctive pinned-in breechblock assembly. Further, the slide of those early guns has a different profile from today’s P226 offerings. 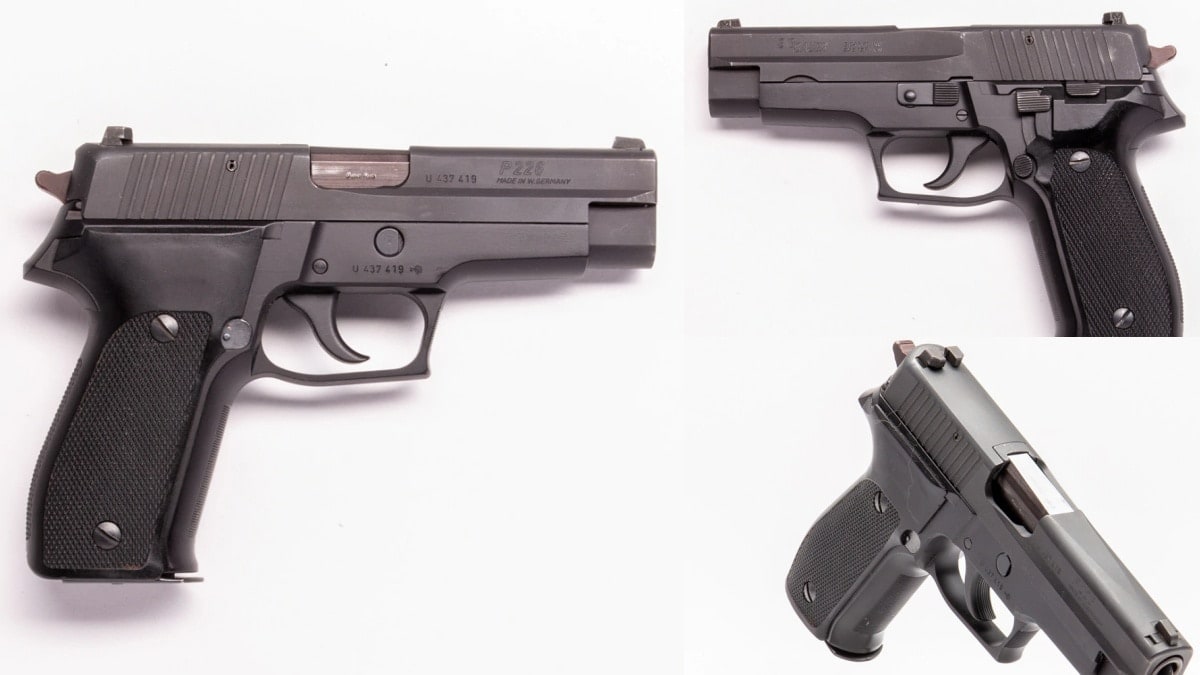 This immaculate P226 has West German proof marks and an Exeter import mark. This well-traveled classic could be yours today.

While Germany was reunified in 1990 after the Berlin Wall came down and the “West” was officially dropped moving forward, some guns continued to come into the U.S. with the legacy markings for a few years. 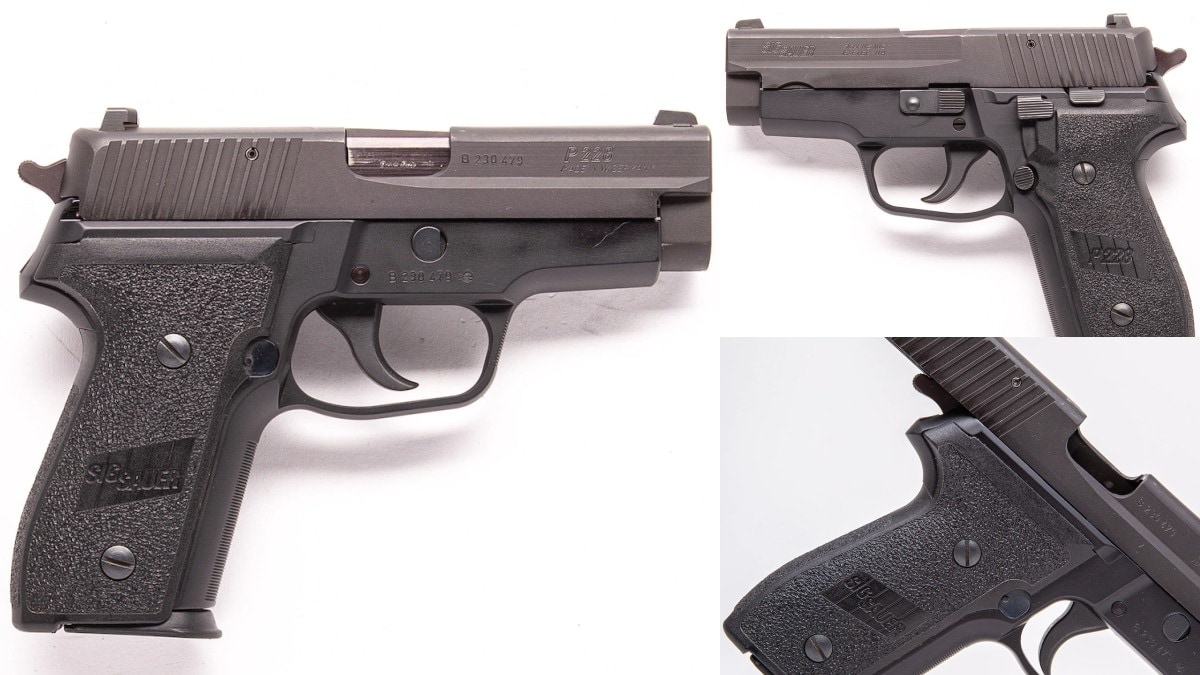 This more compact companion to the P226, the Sig Sauer P228, bears West German rollmarks and Nitro proofs. In very good condition, this gun is priced to move. 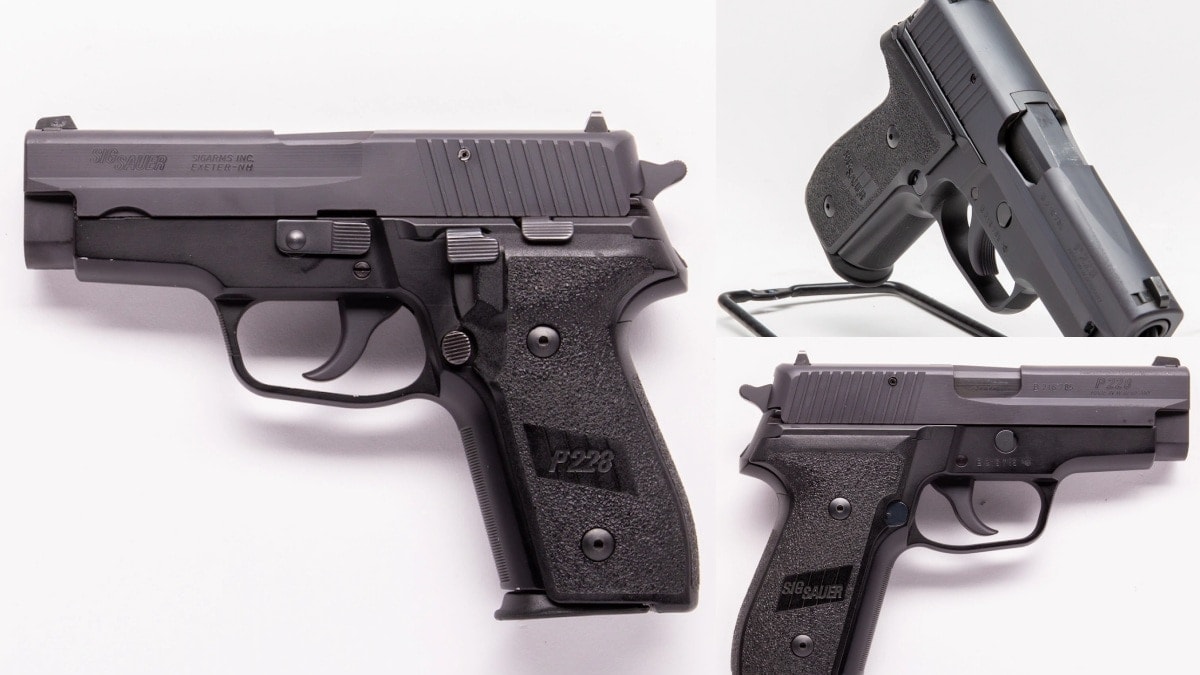 As does this example in excellent condition. Note the later style plastic grips that replaced the more classic pebble design seen on older guns in the early 1990s. 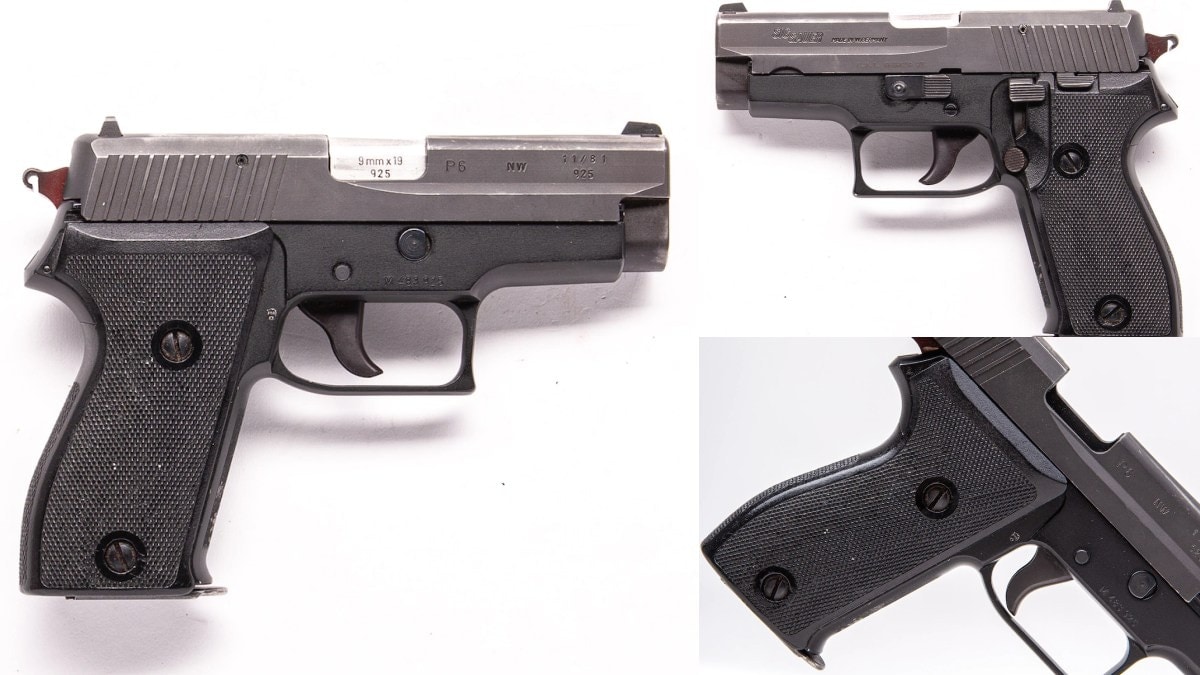 This 1981-made West German P6 police pistol, a variant of the P225, is a surplus compact 9mm single stack with the markings of the Nordrhein-Westfalen state police. Imported a few years ago after the agency upgraded their guns, you can almost hear the Oompah music just looking at this 8+1 round parabellum. 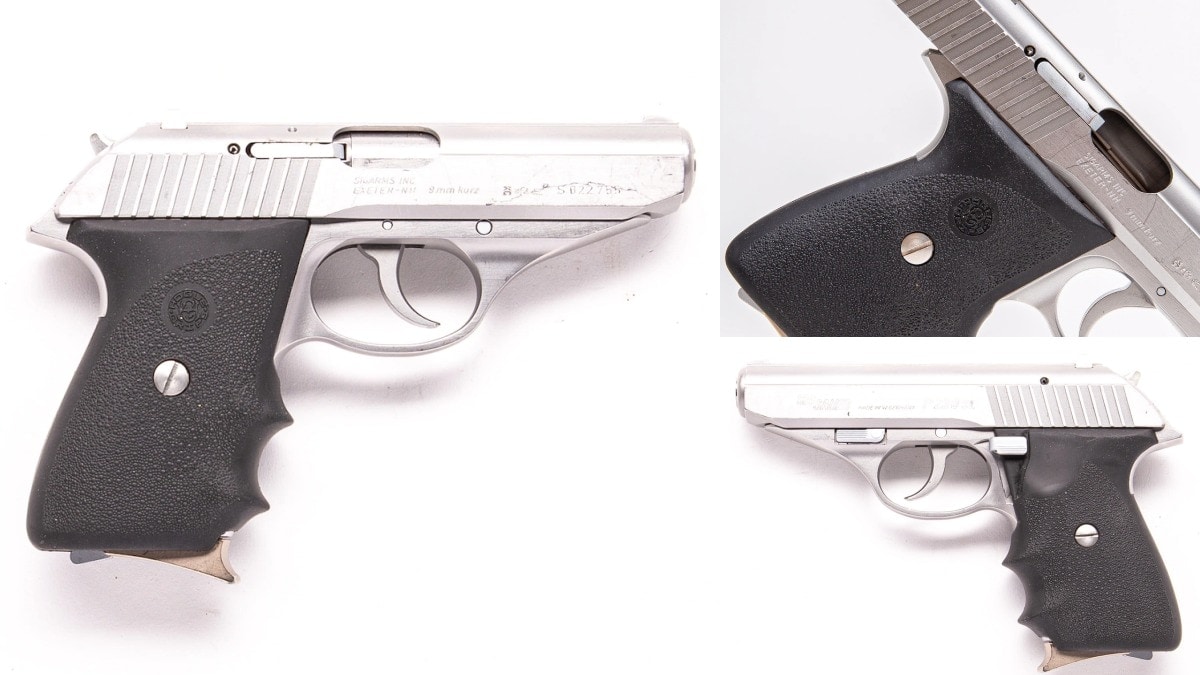 This 1992-date coded West German proofed and marked Sig P230 is the company’s .380ACP chambered answer to the Walther PPK.

Still, if you are looking for a well-made “Old World” gun with a bit of history while still keeping today’s styling, it is hard to beat a nice German Sig Sauer P-series pistole.

If you like interesting and often rare guns like these German classics, be sure to check out our Collector’s Corner or look through our entire catalog of more than 3,000 new and used guns of all sorts.