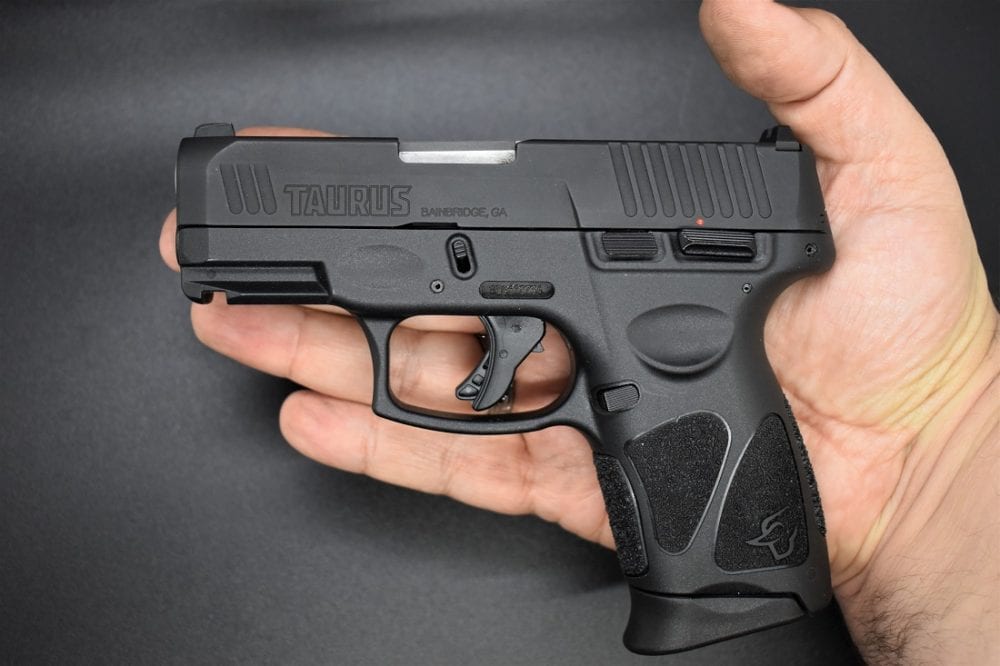 The $300 Taurus G3c is positioned to give more expensive micro-compact 9mm pistols a run for their money (All Photos: Chris Eger/Guns.com)

The newest 9mm pistol installment from budget gunmaker Taurus, the G3c, brings an affordable 12+1 capacity subcompact to the carry market.

Announced last month, the G3c (c = compact) is a scaled-down version of the striker-fired Taurus G3 and uses a 3.2-inch barrel to achieve an overall 6.3-inch length. This is about an inch shorter than the company’s already popular third-generation of polymer-framed handguns, following in the wake of the G2 and PT111 Millennium Pro.

Weight of the G3c, unloaded, is billed as 22-ounces and we found that the gun, when stuffed with 13 rounds of 147-grain Federal Hydra-Shok JHP bulks up to 27.1-ounces. Height is 5.1-inches over the sights with the standard magazine inserted.

How does it compare in size?

The Taurus G3c, when stacked against one of the most common carry pistols in the country, the 15+1 shot Glock 19, is about an inch shorter and 4-ounces lighter. While it should be noted that the Glock 26 is closer in size to the new Brazilain budget contender, it can be pointed out that the aforementioned “Baby Glock” runs a smaller 10-round mag as standard. The 3Gc is more akin in size to the new FN 503 or the legacy Walther PPK and Star BM, although it should be pointed out that all three of those are single-stacks. 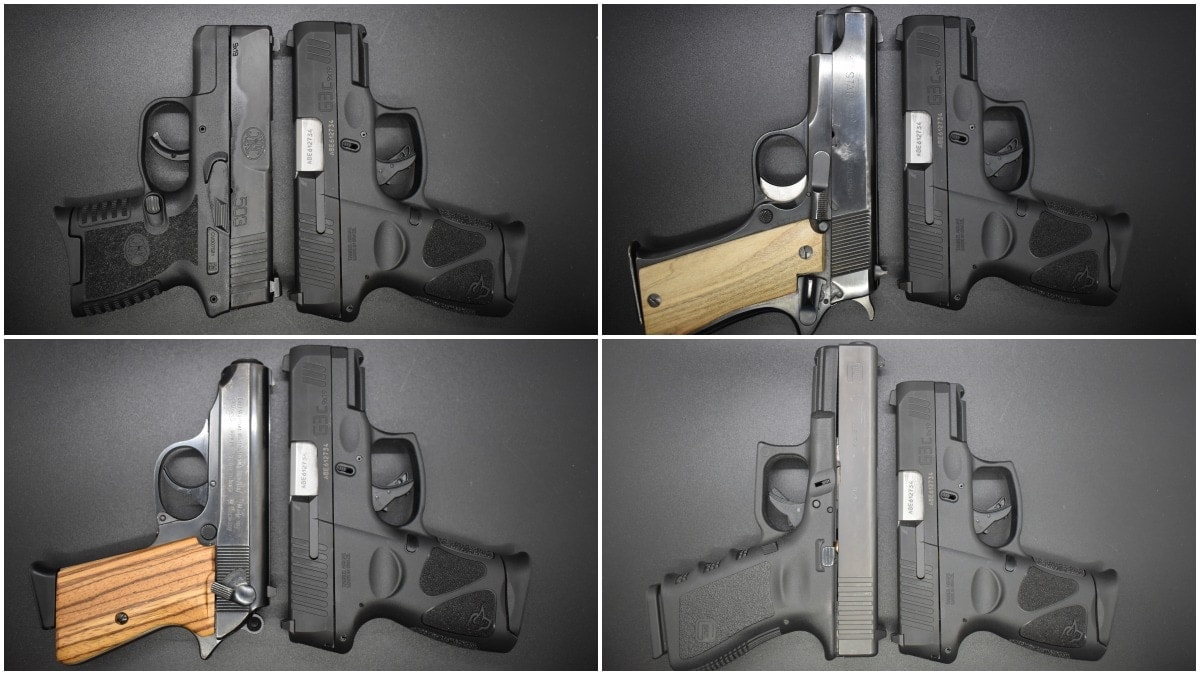 The elephant in the room, however, is how the G3c stands when facing off against the new breed of micro-compact 9mm pistols. On paper, the 18.3-ounce unloaded Springfield Armory Hellcat is slightly smaller, at 6-inches overall, while bringing an 11+1 flush fit mag along for the ride. The 17.8-ounce 10+1 Sig Sauer P365 is even more diminutive, with a 5.8-inch overall length. In short, the new Taurus is very close to that size envelope, but– and this is a big but– is priced at an MSRP of $305 (closer at the $250ish range at retailers) while the P365 and Hellcat both run at least a couple hundo more.

While nobody is hiding the fact that Taurus is located in Brazil, where they have been making firearms since 1939, the company has been exporting guns to the U.S. for generations and has been expanding its operations in the States in recent years. In 2018, the company announced a  $22.5 million investment in a new 200,000-square-foot manufacturing facility in Bainbridge, Georgia. Since then, Taurus, who also owns brands Rossi and Heritage, has successfully stood up the new factory and is producing guns with a Bainbridge rollmark. 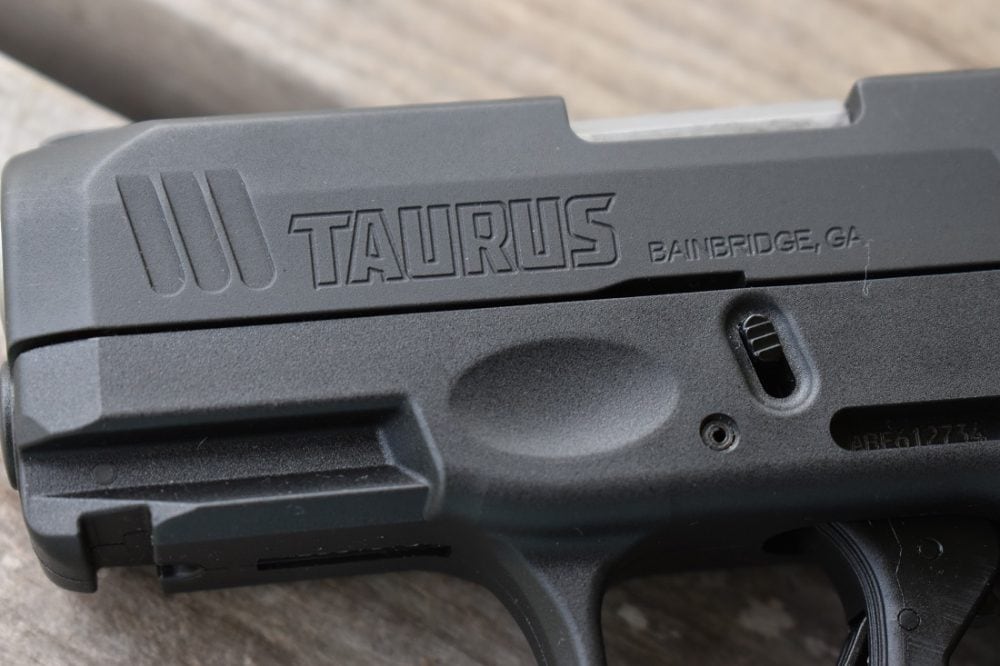 The G3c we have for testing has a Brazilian-marked frame and a Bainbridge, Georgia rollmark on the slide.

The Taurus G3c has three safeties including a Glock-style trigger insert, an internal striker/firing pin block, and a frame-mounted manual safety– the latter a source of frustration for some and a key feature for others. 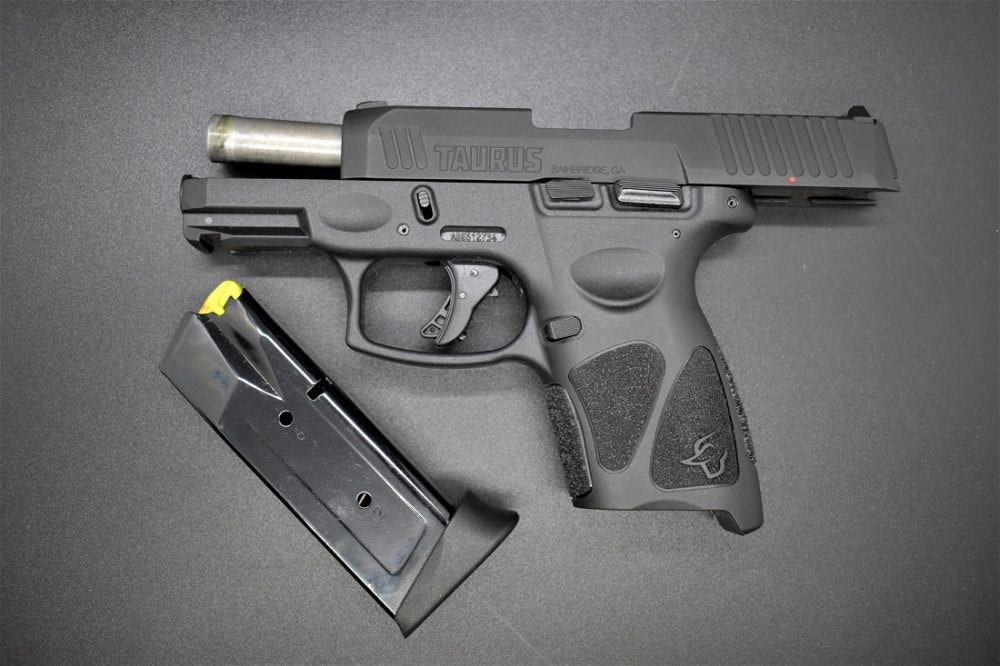 The Tenifer matte black is industrial, almost plain, but stresses this pistol is a tool meant to spend most of its life unseen, not a beauty queen carried to the BBQ. 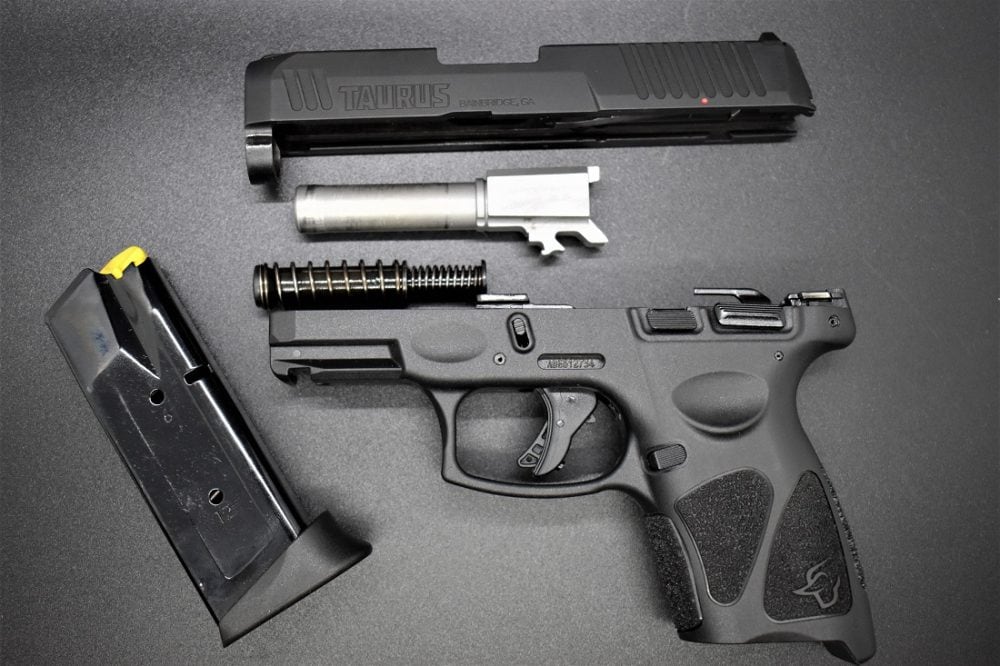 The G3c field strips easily into its basic components for anyone semi-experienced with a modern polymer-framed pistol, with the caveat that you have to pull the trigger to do so, and has Teflon-coated internals and a stainless steel barrel with a polished feed ramp. 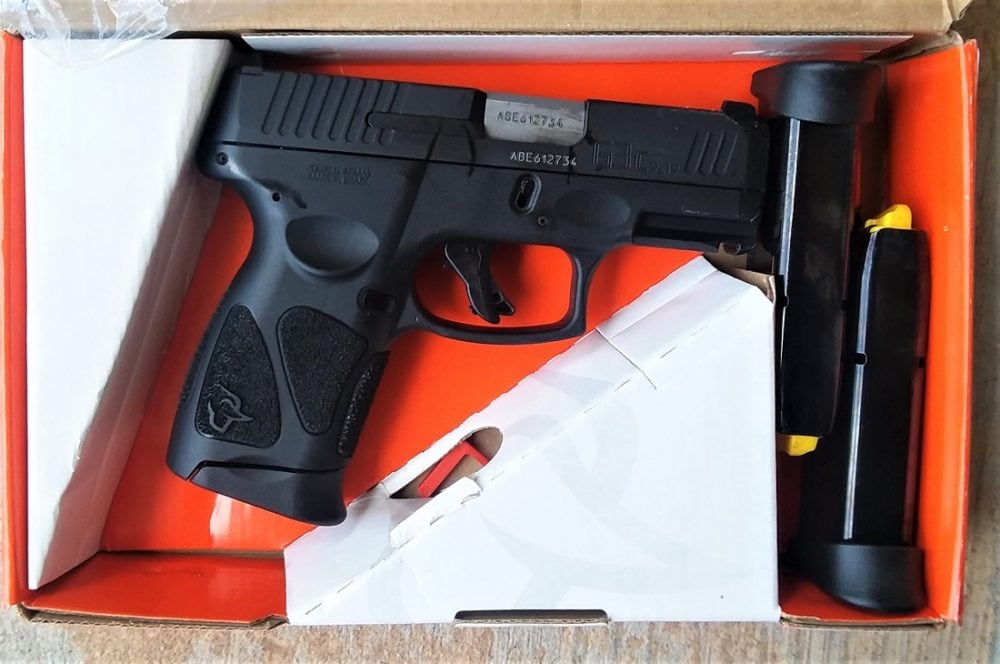 The gun ships from Taurus in an understated cellphone-quality card box with three mags, which is nice.

The standard 12-shot mags are not new to the gun, being the same ones that Taurus introduced with the PT111 Mil-Pro back in the day. The company also stresses their 15- and 17-round mags, marketed for the larger G3, work in the pistol as well.

When it comes to sights, the G3c has moved from their previously-used 3-dot design to a blacked-out rear and single front. The sights are metal and the dovetail accepts most standard Glock-pattern replacements, making them an easy upgrade. 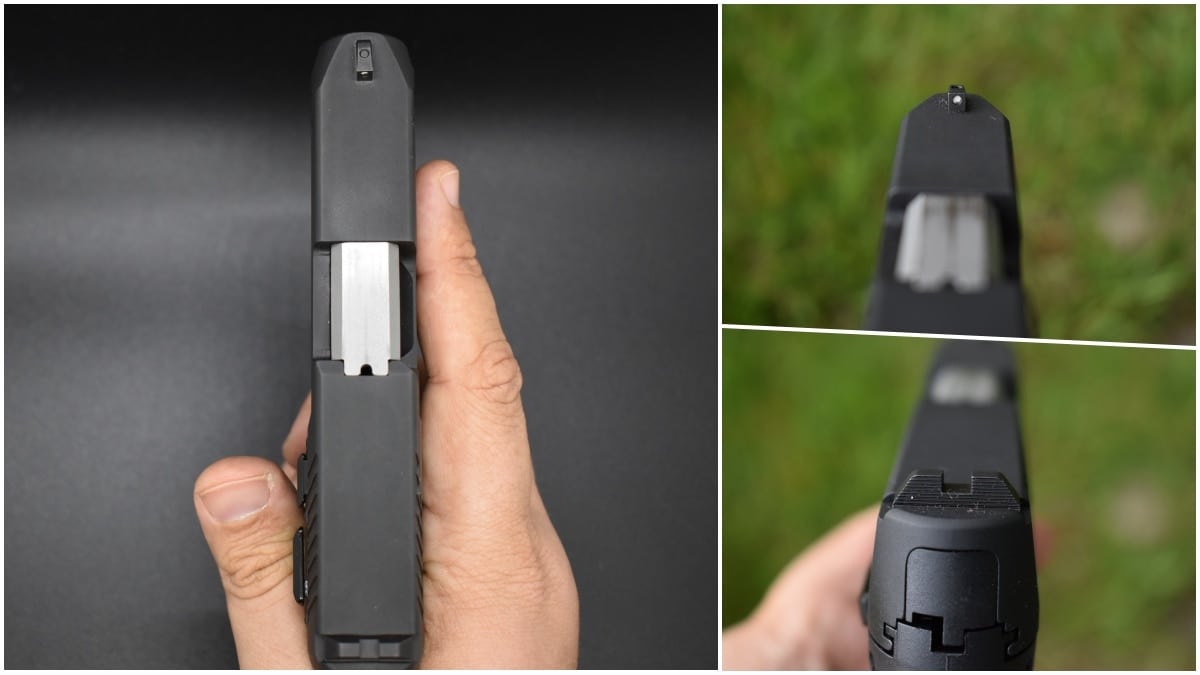 Another advantage of the dovetail is that it makes the rear sight drift-adjustable if needed. Also, note the visual loaded chamber indicator cutout on the top of the slide, backing away from the goofy tactile Ruger-style LCI on the G2.

The G3c’s grip module has a series of six amoeba-shaped bottlecap-sized texture pads that have a decent grip without demanding too much of your hide in exchange. The slide uses shallow forward-slanted front and deeper rear serrations while the surface controls are oriented for a right-handed shooter, although the mag release is reversible for those who swing that way. 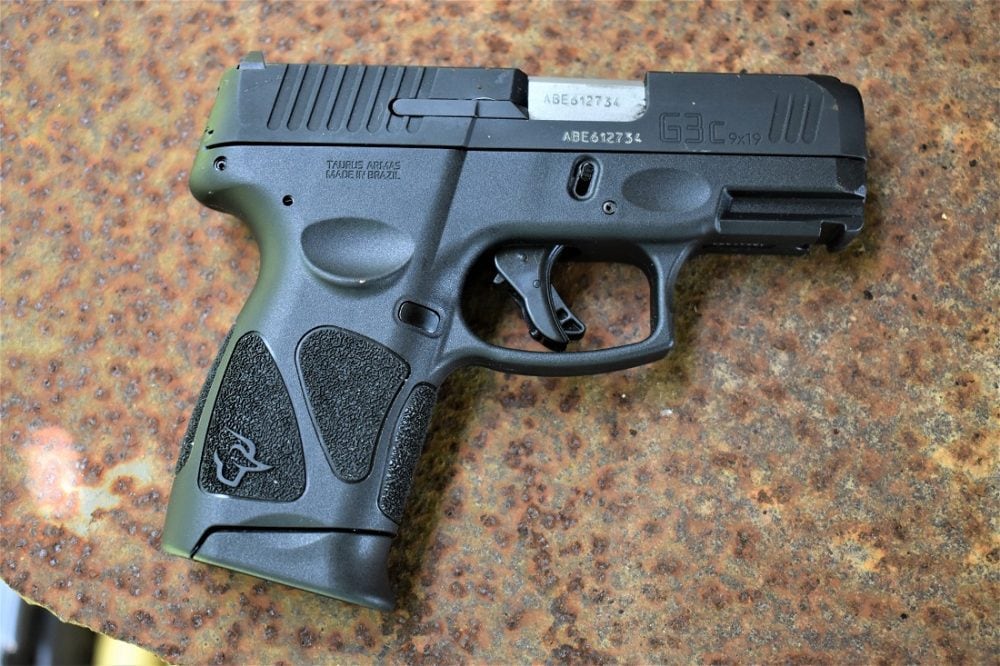 What is ambidextrous is the memory pad on each side of the frame, forward of the trigger guard, to give the user a consistent place to put their trigger finger off the trigger, but still in a ready position. Also, note the trench between the magazine pad and grip bottom to allow users to better rip out stuck mags in the event of a jam or muck amuck situation.

The trigger of the G3c, perhaps the line’s best asset, has a flatter face and shorter reset than on the company’s earlier semi-auto striker-fired guns. Also, it has a second-strike capability without having to cycle the slide, a useful feature in the hopefully rare event of a misfire or light primer strike. It should be noted though that this changes the firing system from single-action into double-action.

In terms of weight, we found our test gun to break at just shy of 5-pounds normally and 6.5-pounds on a second strike without cycling. It has a long trigger pull but a short reset.

How does it shoot and carry? We are working on that so stay tuned. 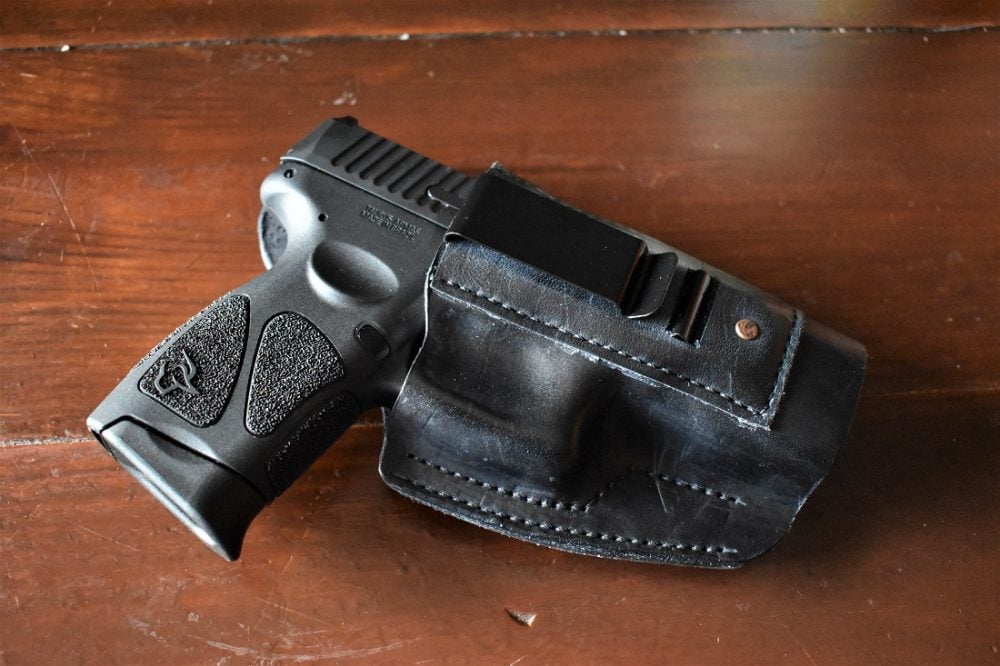 Could the G3c entice folks to take the Taurus plunge for a carry gun?