Is LWRCI's IC DI Worth the Price? 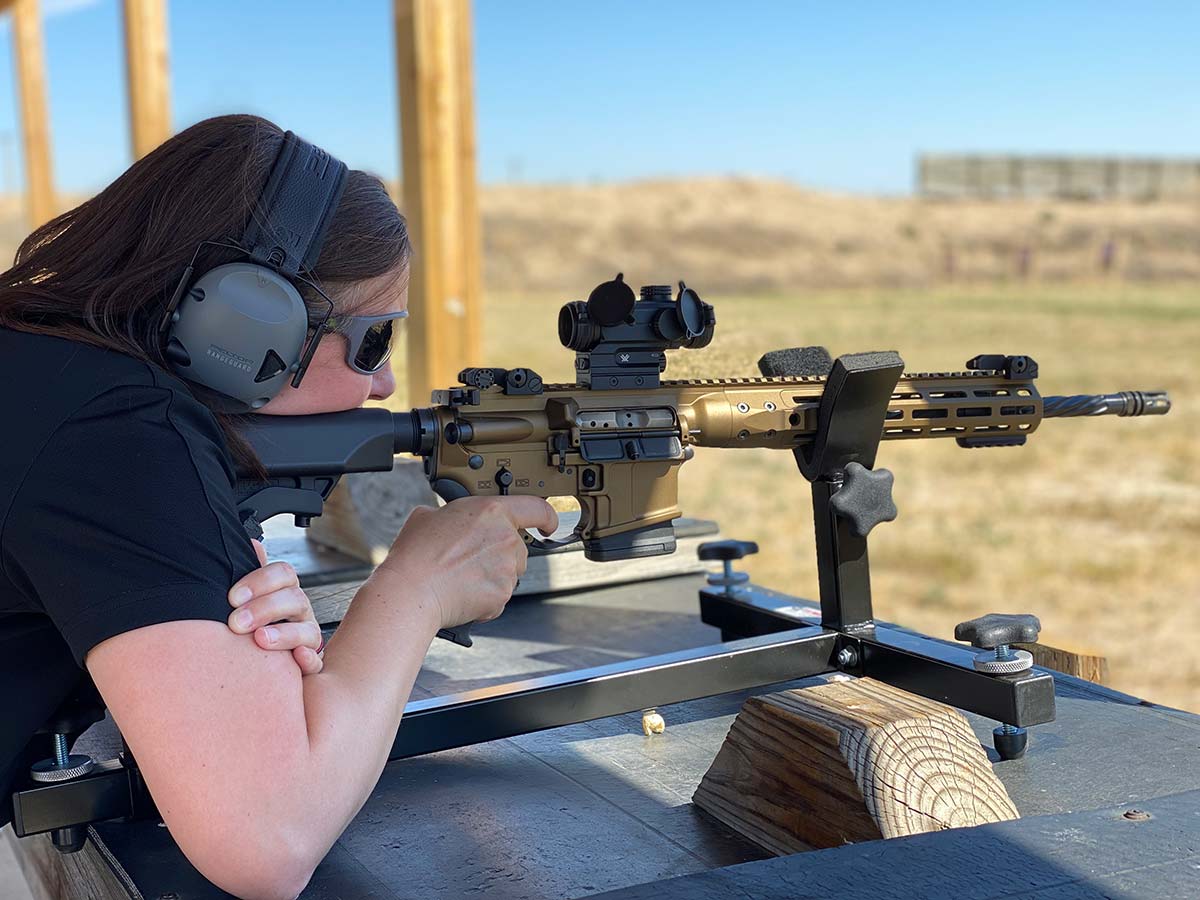 Using the CTK P3 Ultimate Gun Rest is one of the easiest ways to help dial in your optics. (Photo: Sean Curtis/Guns.com)

LWRC International, based in Cambridge, Maryland, makes fine rifles. I’ve have owned an IC DI model for several years now, and it is a shining example of what a top tier AR-15 maker does at the height of its craft. By the end of this review, I hope you’ll see why.

The IC DI is a direct impingement model. This is an important distinction because LWRCI is also known for its quality piston model AR-15s. The DI is an AR-15 chambered in 5.56 NATO that weighs 6.6-pounds. The fluted barrel contributes greatly to this dainty weight. The 16.1-inch cold hammer-forged barrel has a twist of 1:7 and is capped with an A2 birdcage flash hider. The rail is fully free-floated and features M-LOK, 3 QD mounts, and a Picatinny rail on top. 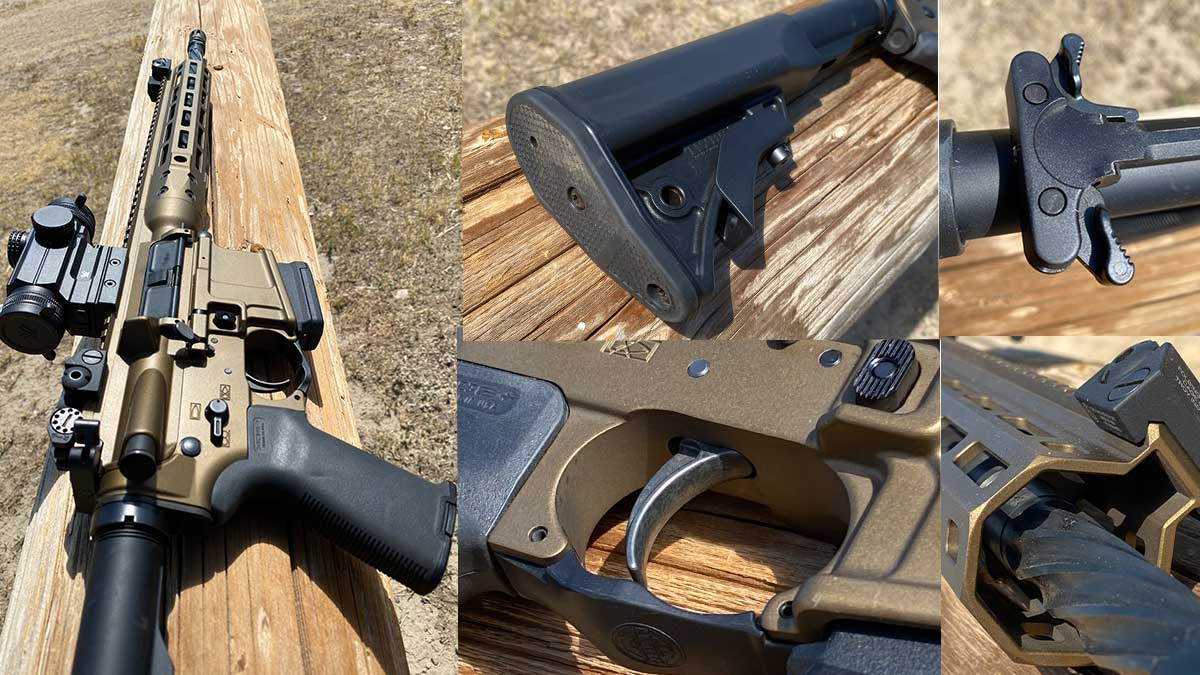 The parts come together to produce a solid rifle that is reliable and accurate. (Photo: Sean Curtis/Guns.com)

LWRCI has a proprietary DI bolt carrier group behind the barrel, and this is housed in a Monoforge upper. The NiCorr-coated gas system is mid-length. If you are into ambidextrous capability, you’re in luck with this rifle. That’s right, from the twin-sided charging handle to the mag release, fire selector, and bolt release, they are equally represented on the left or right side.

The trigger is solid and averaged 4-pounds, 15-ounces on my Lyman Digital Gauge. Being a single-stage, there is barely any travel as you begin pressing back, then it snaps. The reset comes on after about a millimeter release and is both audible and tactile. 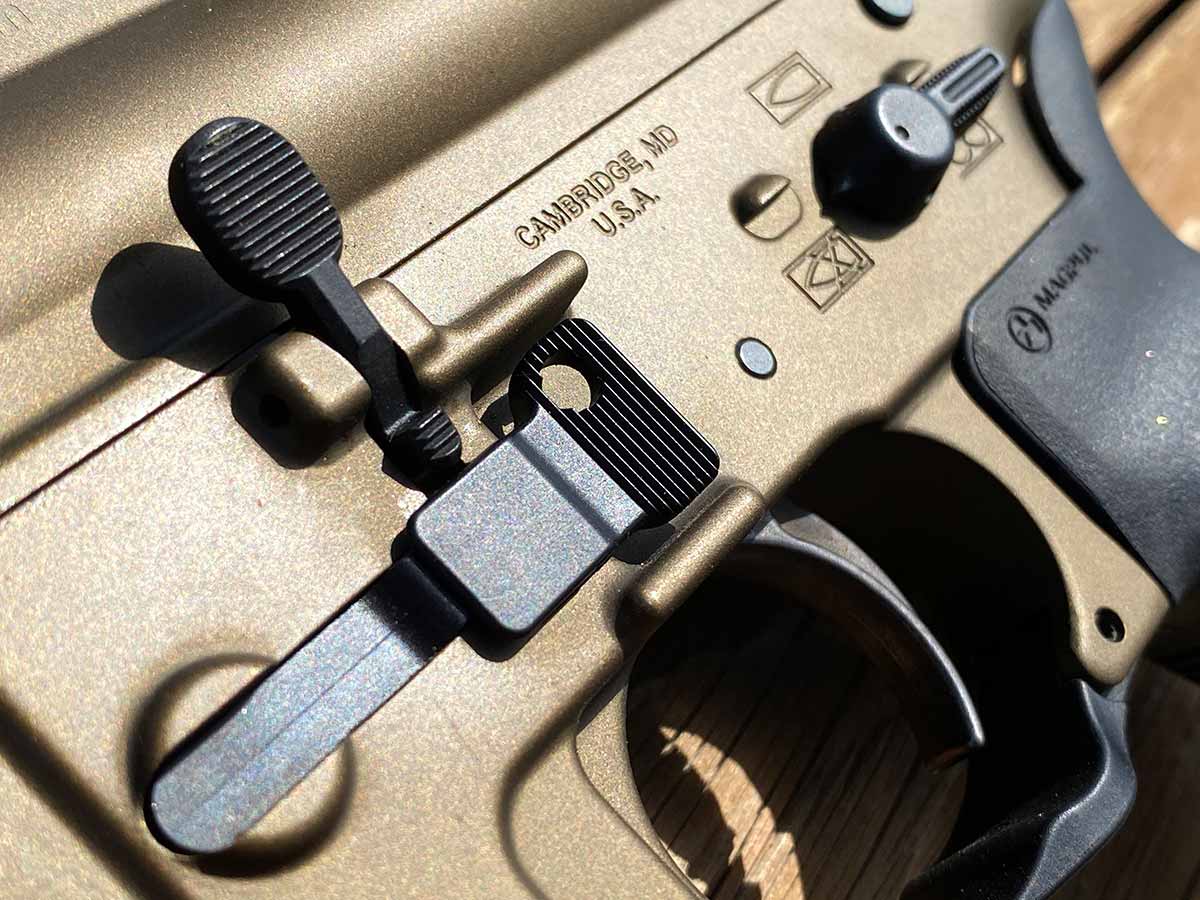 On the left side of the receiver, the ambi controls get more interesting. (Photo: Sean Curtis/Guns.com)

The rifle is well balanced, not clearly tipping one way or the other when I hold it. I also love the light weight! Without a bunch of peripherals like lights, bipods, and other “essentials” bolted on, the DI is easily maneuvered. I have even previously used it in structure clearing training. A few hundred draw strokes during a class, and you appreciate the lightweight package. 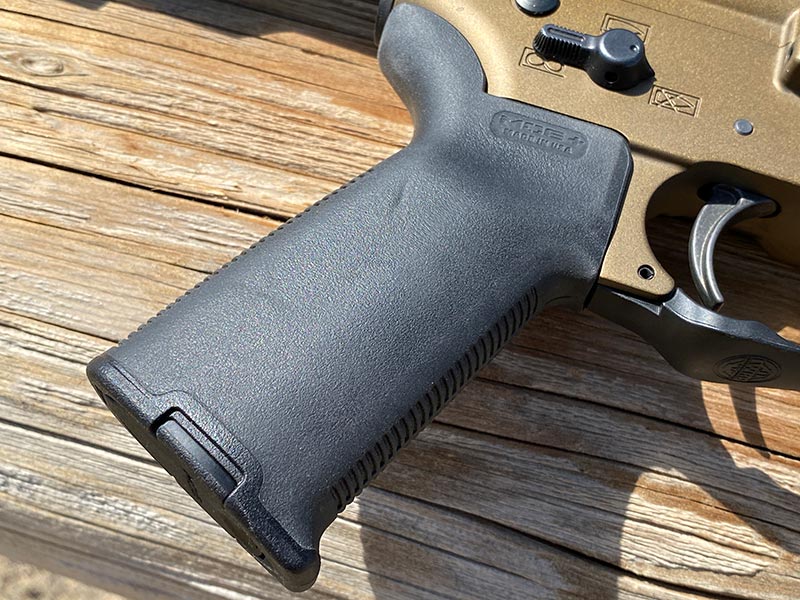 This Magpul MOE grip has a nice rubber texture that hangs on to your palm. (Photo: Sean Curtis/Guns.com)

The grip is a Magpul MOE that offers a rubbery outer surface for extra tackiness. It’s at a good angle and is hollow, with a storage cap on the bottom for added utility. The rail is thin enough in diameter that it can easily be handled by most hand sizes. I’d have liked the rail to be longer, but most people wouldn’t have a problem finding a good position for their support hand.

The buttstock is minimalist, fitting in with the weight-saving theme, though it’s got surface area where it counts — on top, so you can establish a good cheek weld. The stock collapses or expands out, having a total of six positions to accommodate shooter preference.

There are a couple of metrics I consider when evaluating AR-15s. One of them is accuracy at given distances, and the other is reliability. To be clear, I don’t shoot much past 100 yards, so the standard MOA works great for me as a known measurement of accuracy.

I’ve had a Vortex Spitfire AR 1x prism optic mounted on the DI for a few years, and it’s a great fit. The etched reticle is always there, whether you remembered to change the batteries out or not. Remember to regularly swap out batteries, and you can enjoy a pretty cool lit reticle in either red or green colors. The reticle itself has an outer ring, inner ring, and dot in the very center. It’s great for up-close work. 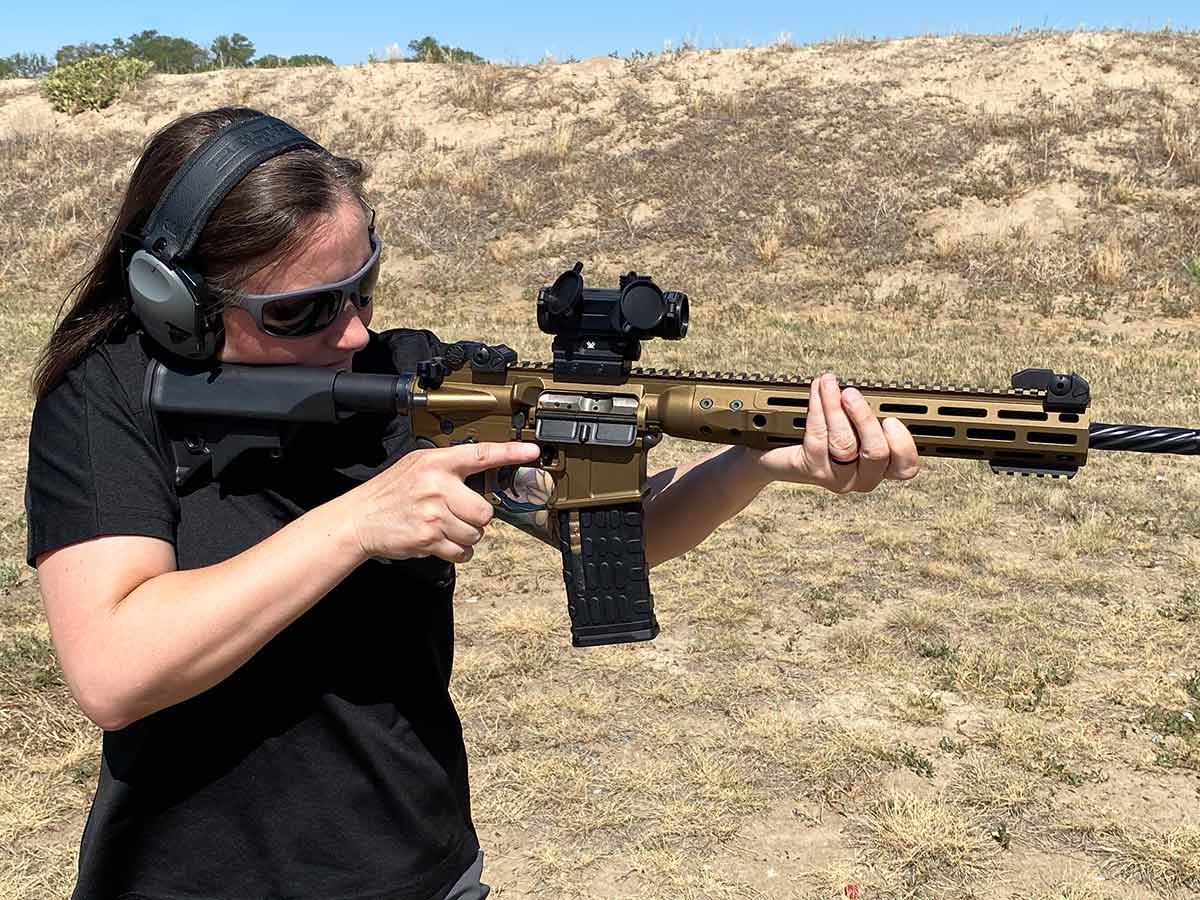 I see a lot of guns over the normal course of a year. Many of them come and go, and I enjoy each experience as I test, photo, and then write about them. However, the Mrs. saw this burnt bronze, RSR exclusive, DI, and it was love at first sight. (Photo: Sean Curtis/Guns.com)

Starting out at the range, I zeroed at 25 yards on a CTK Precision Ultimate Shooting Rest. Less than 1-inch groups are pretty easy at this distance. Eventually, we pushed out to 100 yards. My eyes aren’t what they used to be and seeing the small dot on my target with a 1x magnification was a challenge. However, we were able to hit consistently at this distance, creating groups just under 4-inches.

The rest of the testing consisted of running drills and the normal mag changes that ensued. As far as reliability goes, I’m looking not only for failures to fire or eject but other issues that can cause you to take some action other than shooting to address them. I had no serious malfunctions, like a stovepipe or double feed, to speak of. All in, the rifle has seen around 2,000 rounds of various brands of ammo, with the last 500 consisting of 50-grain Federal. There were no hiccups. 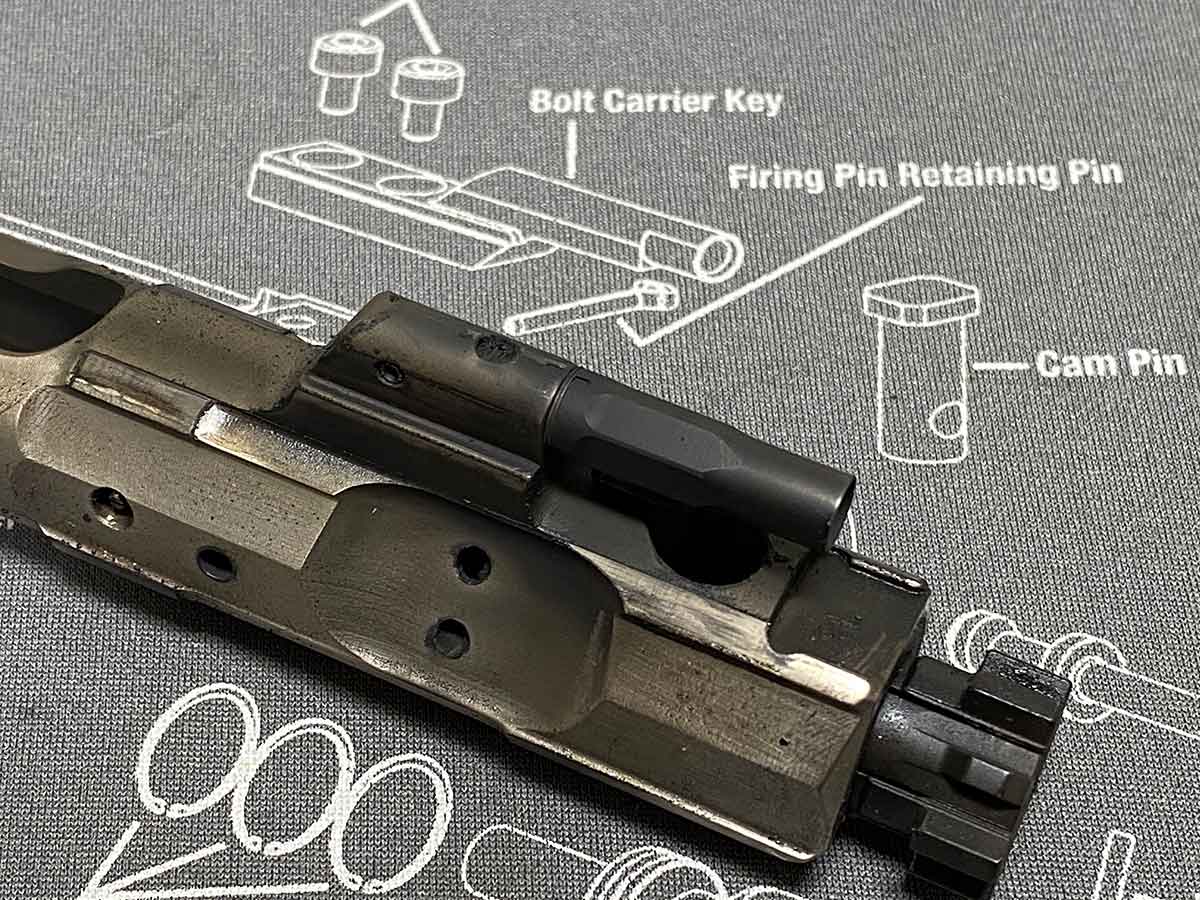 Notice anything different? Look at the diagram on the mat; there are no screws to be staked. (Photo: Sean Curtis/Guns.com)

I had two suspect magazines where the bolt did not remain open on the last shot. Rotating these mags out solved the issue, though. Other than that, the rifle performed flawlessly. The rifle ran hot after a while, but this is common on smaller diameter handguards with repetitive shooting. Recoil is the standard, negligible 5.56 I am used to, and follow up shots were easy to direct and control. 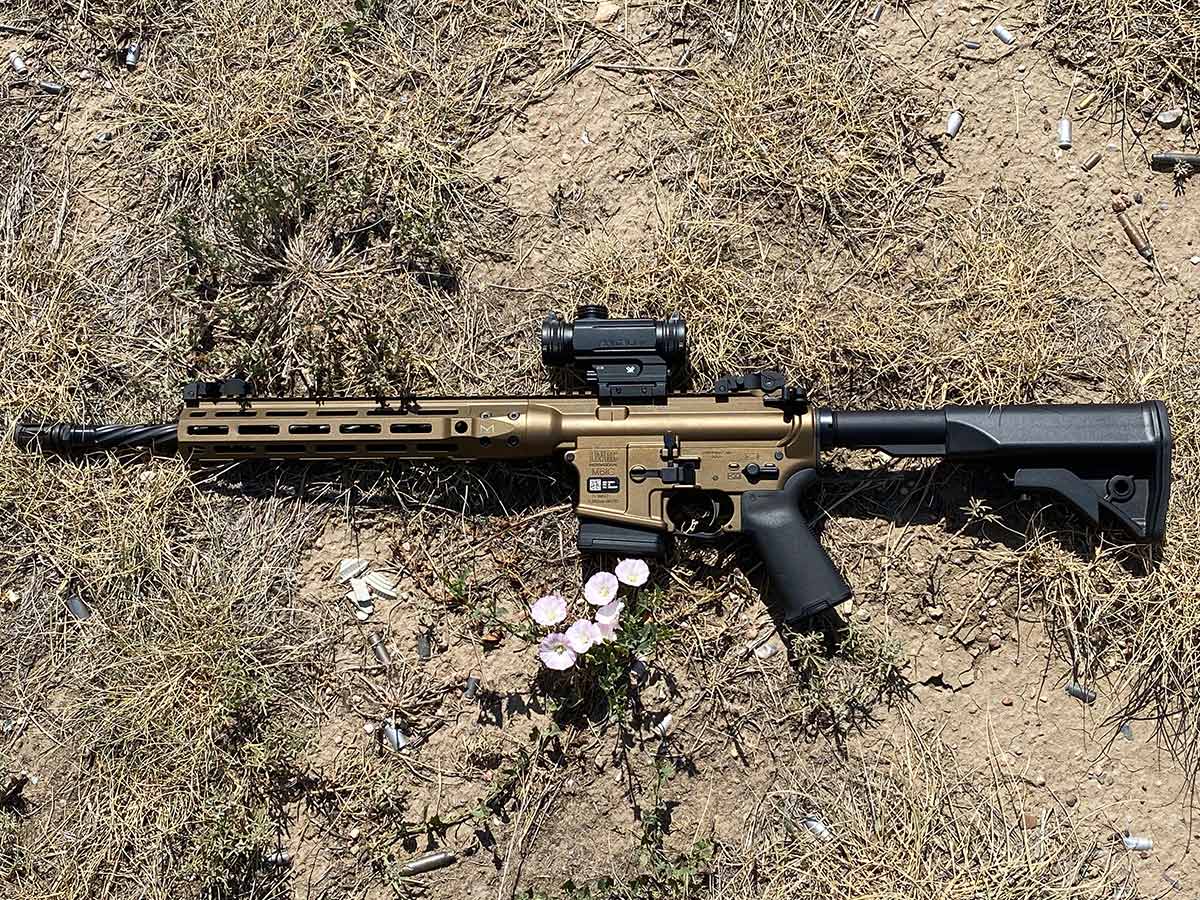 The LWRCI IC DI is an impressive AR-15 with a lot of proprietary features that contribute to the overall performance. The fluted barrel is beautiful and really helps cut overall weight. The internals, such as the Advanced Bolt Carrier Group, are designed to run smoothly for a long time. This all comes at a price, of course.

The MSRP for the IC DI sits around $1,747, though I have seen them for sale online at less depending on model and color. Regardless, the weapon is outstanding, and you won’t regret your purchase. The LWRC IC DI is a quality rifle that will provide you with solid accuracy and dependable service for years to come.