A unique international partnership has produced an equally unique rifle. FIME (Firearms Importers, Manufacturers, and Exporters) Group of Las Vegas, Nevada teamed up with Molot, Russian producer of the VEPR rifle and shotgun platforms, to create a re-interpretation of the AKM47, chambered in 7.62×39 mm.

Purists in the house should note that AK will suffice for the more exact, but dreadfully boring, AKM for the remainder of this article.

Section 922(r) of US law has, since January 2012, prohibited importation of sporting rifles. The FIME Group/Molot partnership is a bit like a fun party with all the color of foreign guests, but with Big Brother’s approval. Federal code restricts imported rifle parts to a maximum of 10 per firearm. The FMAK plays it safe with just eight, including a five-round magazine.

Despite a majority of its parts being made in the US by FIME Group, the FMAK’s essential pedigree is that of a Russian VEPR. Major components—the receiver, barrel, trunnion block, bolt and bolt carrier, gas piston, and lower handguard are Molot products. What’s more, many components, both Russian and US in origin, are milled in the RPK tradition, with thicker steel than a standard AK. 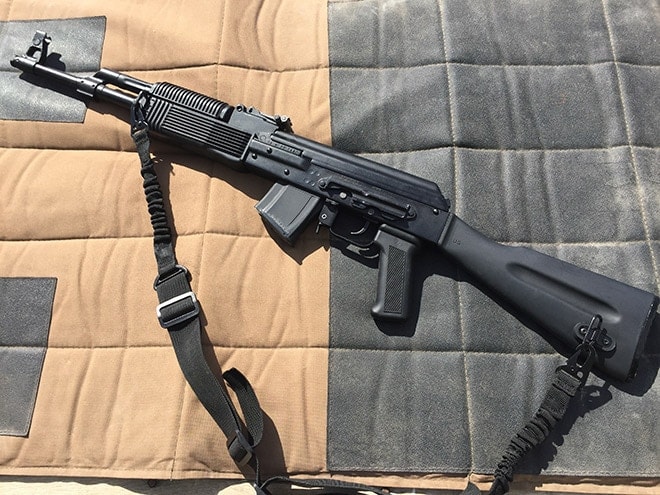 All that industrial-strength construction makes for an AK that’s a bit heavier than the norm. The FM weighs in at 7.8 pounds unloaded. By comparison, a standard WASR weighs half a pound less, and includes a bayonet lug, a traditional feature the FMAK lacks. 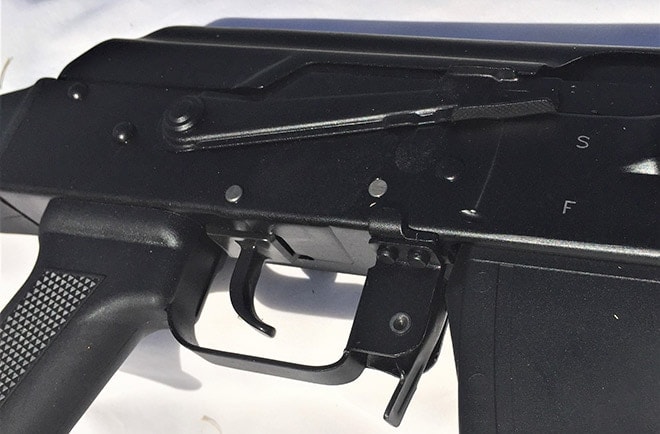 The traditional, functional safety lever. One thing I would replace… (Photo: Team HB)

FIME Group made sure the FM is worthy of its relatively premium price by including other upgrades as well. A 14×1 mm left-hand muzzle thread is covered by a heavy-duty flash hider, which is nicely updated and not a traditional bell-shape. In addition to the standard adjustable front sight, the added a windage-adjustable 1000m rear sight leaf. The Warsaw-length polymer buttstock is plain, but true to tradition with a trapdoor and included cleaning kit. As of January, FIME Group has brought to market a nearly identical, folding-stock model of this gun that will surely be popular as it can be made more compact.

A “double stage” trigger provides the feel and action of the familiar two-stage trigger. On the left of the receiver is a handy optic rail.

The reviewer becomes a fangirl

The FMAK test marked my first serious foray into the realm of the AK. I was helped, albeit unwittingly by “Rob Ski” of the AK Operators Union 47-74 (AKOU) YouTube channel and website. Ironically, the same rifle was undergoing a torture test on the site around the time I began my time with the FMAK. It was at times a consuming process, schooling myself on this new platform during the day, watching too many videos in the evening, and raising eyebrows on AR-populated ranges. But thanks to abundant advice from AKOU, I felt like I had a big brother (the good kind) to lead and advise my efforts. Little did I know at the beginning how important one recommendation would be. 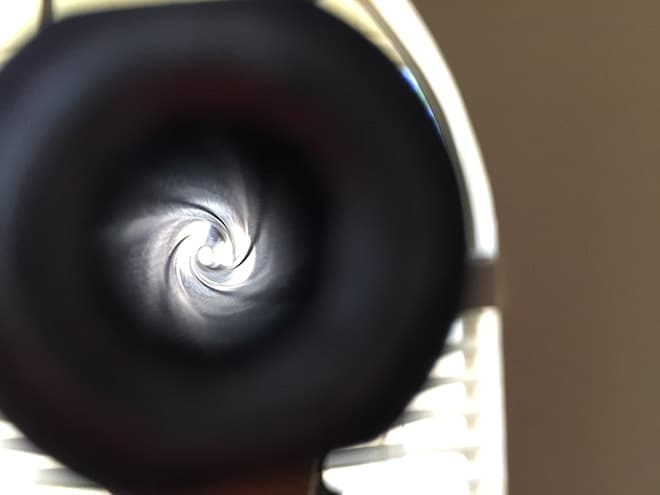 Inspection of the FM reveals none of the usual consumer complaints about less expensive AKs. The front sight post is straight as an arrow relative to its frame. It’s also perpendicular to the barrel, though it did arrive with a right-hand adjustment and proved to be tight, tight, tight, ruining two mass-market sight tools in attempts to center it, as well as being non-responsive to the crude but traditional mallet method. Sure, I could’ve adjusted the rear windage instead, but I was of a mind to keep as many parts of this test comparable to other AK47s as I could. In the end, I had little choice but to take Rob Ski’s advice about sight tools for the “eye-rohn sights.” After some wasted money and time, the Magna-Matic Defense tool easily moved the Front Sight That Ate Cheap Tools. More on that in a later review. 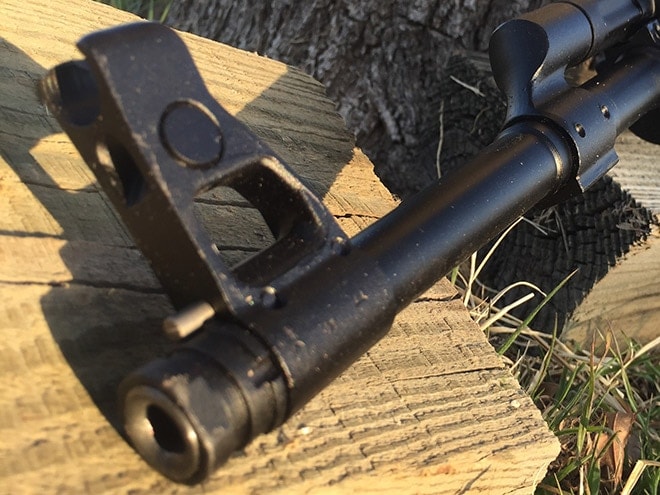 Every rivet is tightly bedded, with no apparent mismatches between where holes are drilled in the receiver and where rivets are placed. The muzzle brake retention pin is functional. At the critical trigger guard/magazine latch juncture, the rivets are even and solid, as they are inside the magazine well.

The gas block cover fits tightly. Inside, the dovetailed rear of the bolt carrier and trunnion appear perfectly machined with no abnormalities.

The safety lever, standard and inconvenient for short-fingered me, works as designed. This is one of two features I’d modify if the gun were mine. An elongated safety lever that doesn’t require unseating the hand from a firing grip just makes sense. 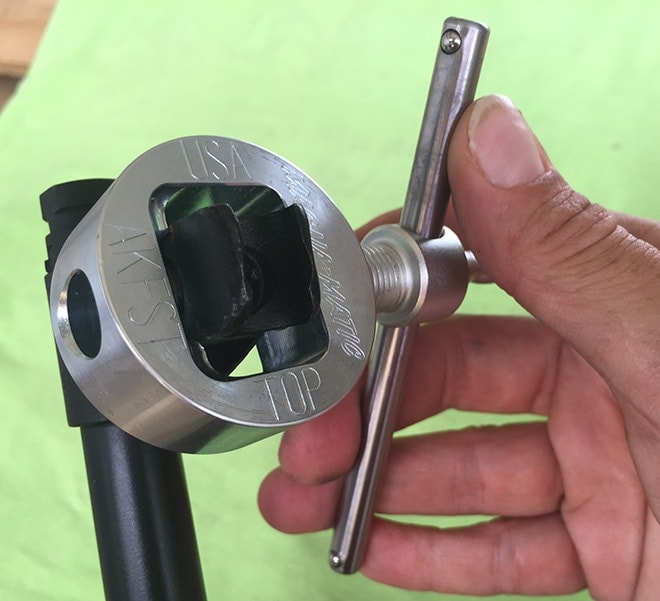 Determined to find something out of plumb, I put a level to the optic rail. Nope—it too is securely and perfectly attached to the receiver.

The FIME Group owners’ manual specifies that even though some parts may not appear straight/aligned, this should not affect function. Perhaps I was sent a rose among thornier choices, but there was nothing out of alignment here.

Firing the FMAK is a breeze. Thanks in part to its heavier weight, recoil is less than on a standard AK. Cartridge ejection is remarkably powerful—it spews cases more than 20 feet sideways, something that proved to be occasionally humorous when they bounced back on me or startled a bystander.

I don’t own a trigger gauge, but I estimate pull to be about five pounds. There is a good half-inch of travel for the first shot fired, and a reset that’s normal for a milspec rifle. Though Rob Ski rails about the trigger being a candidate for an upgrade, I find it quite acceptable and comparable to a milspec AR trigger. Running the gun under the clock, the trigger was in no way an impeding factor.

Tulammo 122 grain, steel cased ammunition was used during most of my time behind this rifle. It fed several hundred rounds of this cheap stuff without a blip, showing some remarkable accuracy for the platform as well.

I can barely stomach to witness the torture tests that this and countless other guns endure at the hands of YouTube celebrities and wannabes. Sure, the stresses of actual battle are a real test of a firearm, and flinging them onto sidewalks, submerging them in mud, and pouring dirt into the action are shortcuts to what years of field might begin to inflict. I wreaked no such abuse on this piece of cross-continental craftsmanship. But, I’ll confess to having fired 250 rounds through the thing before applying a drop of oil. It didn’t care one way or another. Subsequent firing has included typically windy desert spring weather, when each round fired in prone kicks up a temporarily blinding cloud of dust within already dust-filled air. No bother—the FMAK has yet to be cleaned, and is running, if anything, more accurately now than it did brand new.

In addition to a safety extension for convenience, the other modification I’d make to this rifle, is a single-point sling adapter. Although I appreciate the traditional look of the rotating wire two-point sling attachments, they quickly revealed themselves to be the weakest link on the rifle. The rear one deformed in about half an hour that included some casual carry and a 30-round course of fire during which the sling alternated between over-shoulder and over-neck carry. This light use caused the sling loop to become dangerously loose. 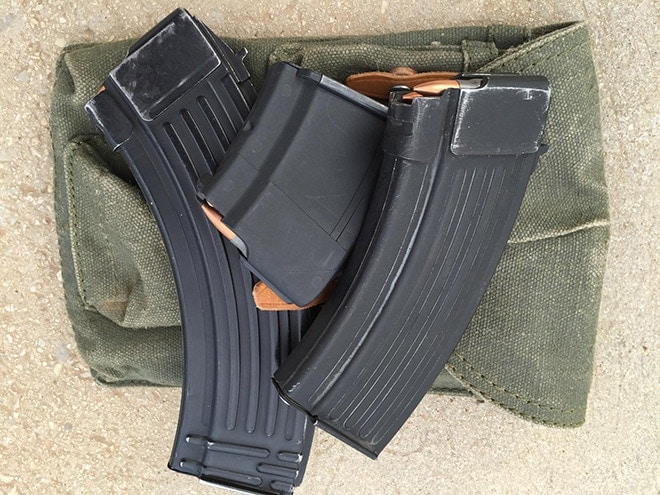 All mags work so far, but Magpuls are a little sticky. (Photo: Team HB)

FIME Group offers a one-year warranty on all parts of the rifle, exclusive of modifications and abuse. The sling loop matter seems like one that would be covered under that warranty.

Several magazines of assorted vintage and origin were used during the test. Molot’s own five-rounder was among the majority that were easy to load. That was also true of traditional metal magazines made in various Eastern Bloc countries. A lighter Magpul mag was a bit more difficult to load, having an extended flange on the frontal surface that the others don’t have. All magazines fed without issue.

In terms of accuracy, the FMAK is pleasing within the AK genre. Accuracy testing was done at 25 yards since no magnifying optic was available. With iron sights and from a relatively stable prone position, with the gun supported only in front, the rifle surprised me by putting three Tulammo brand bullets through a single hole. 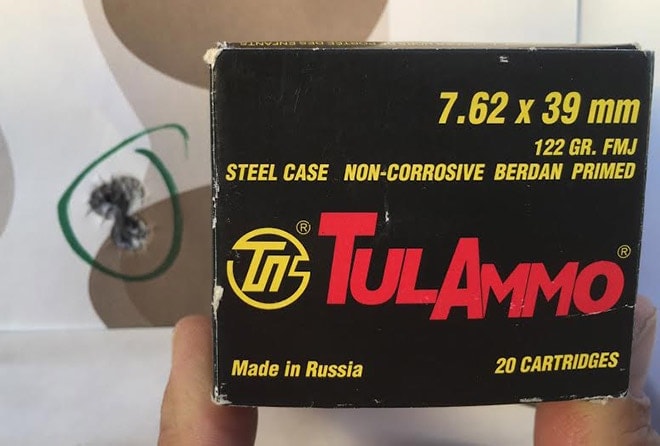 Also tested was Bosnian BBM 123 grain, brass cased ammunition. Five-round groups fired from 25 yards were consistent at 1.25 inches with this brand, while Tulammo seemed more comfortable making 1.5-inch groups. This comparative testing was done with an Aimpoint Micro red dot optic. The decrease in accuracy relative to the three-shot groups with iron sights is surely due to imperfections in the mounting system. Those accessories will be covered in another review.

Although the electronic optic made pinpoint accuracy less attainable, it did make battle-style timing and accuracy possible in comparison to the irons. I ran a couple police qualifications with and without the optic. With iron sights, it was difficult to fire within the time at 100 yards. The black sight post on a black target made even sight alignment at 50-yards a chore. That problem is easily fixed, assuming there’s no rain, with a bit of white-out or other brightening treatment on the post. 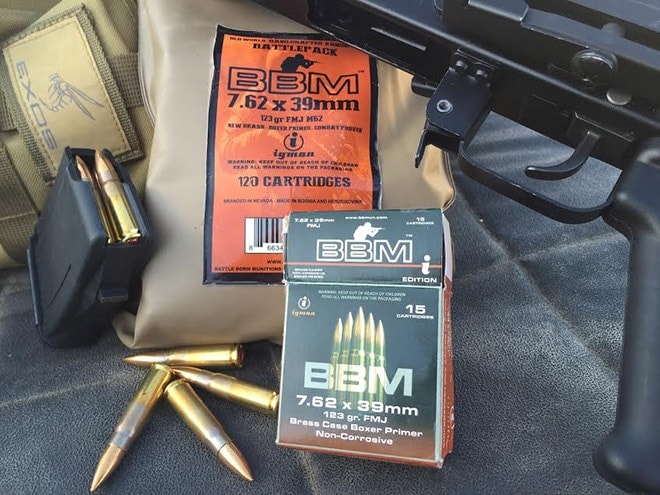 By the second qualification with iron sights, I discovered that Rob Ski’s advice about using the “caveman EOTech,” AKA the front sight and its circular frame, was the only thing I needed to use to hit center mass from 25 yards and closer. That alone speeded up my engagements. Headshots, however, became a challenge all over on the black target, and I dropped one of the two required.

With the red dot and an understanding of my 15-yard holdover for headshots, I was able to score in the 90s on the police test. I indulged in a moment of smugness after this relatively unadorned and crude rifle netted scores similar to the accurized ARs with magnifying optics populating the firing line. 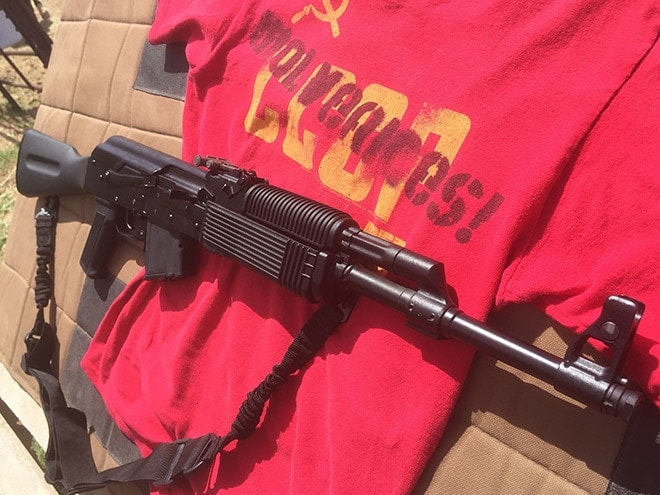 An 80s pop culture reminder of why it’s good to learn to AK. (Photo: Team HB)

Retailing for $999.99, the Molot VEPR FM AK47 has a lot going for it in comparison to lesser and even some higher-priced AKs. Its heavier construction and relatively good parts availability, through K-Var, a company related to FIME Group, make it worth considering as the one AK to own for a lifetime. Although quality has fallen short in the sling attachment department, this obstacle should be easily overcome. For those who want classic styling and superior function, this is your AK.