5 Best cap and ball black powder revolvers ever made 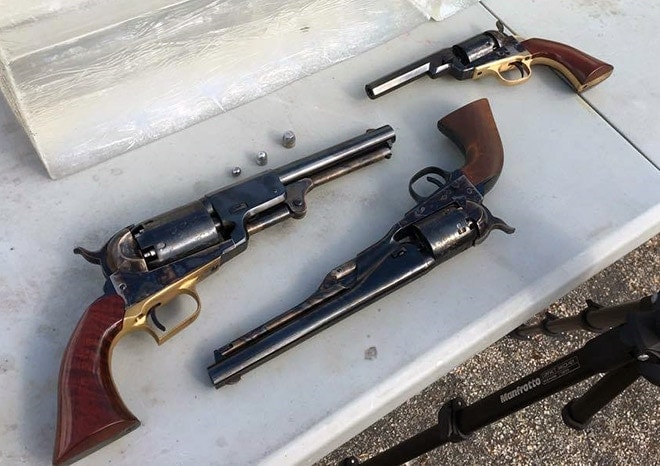 Is there anything more enjoyable than making smoke—in a healthy way? I am talking about black powder, of course.

Touch off a black powder firearm and it gets everyone’s attention, from the cloud of blank smoke and jet of flames to the loud cough of the report. The peculiar aesthetics are also something people take note of, but nothing is quite as fulfilling as putting old-timey lead on paper or an appropriate game animal. Prices on currently made models are lower than ever. Combine that with the low cost of shooting and maintenance and it means now is the time to get into this sport if you have ever been on the fence.

Unsurprisingly, black powder revolvers are especially prevalent now as many new black powder shooters start out owning one of these wheelguns. All of these weapons offer repeat firepower and a heartfelt nostalgia for the romantic Old West…

But which are the best?

When evaluating a black powder revolver, four factors come to mind: historical accuracy, handling, reliability, and price. Firearms like the LeMat, the Starr Army, and the Colt Paterson tend to be both expensive and more complicated for a new shooter. Therefore, they are ignored. Also ignored are brass framed guns—not for snobbish reasons—but for the sake of historical accuracy and long-term durability. Few guns ever used frames made of such material and today’s replicas using brass will shake loose over time. Also, the Ruger Old Army is not included as it is neither currently manufactured nor did it exist in the 19th century.

The 1849 Colt revolver was Sam Colt’s first offering to the commercial market and truly the first practical concealed carry handgun that could get off multiple shots—five of them. The 1849 became Colt’s most popular percussion handgun.

The 1849 Pocket was a popular choice at one time, but has some real downsides for a modern shooter today with its low recoil, light weight, and thrifty shooting expenses being its only upsides. (Photo: Terril Herbert)

The new 1849 Colts made by Uberti sport a four-inch barrel with a narrow, yet hand-filling walnut grip. This five-shooter is the smallest gun on the list, at just over one pound. It also has the smallest available caliber—31.

The accuracy of the little gun is quite good for its size and the 1849 is the cheapest to feed, using loads of only 10-15 grains of FFFg black powder or a substitute. There is a lot of lead savings also with the tiny 50 grain round ball used in these pocket revolvers. This is made cheaper by using .330” buckshot that can be found amongst shotgun reloading components.

The downside of the 1849 is the relatively small chambers, which are harder to drop powder into when loading. The Colt 1849 has almost no recoil, but it also has very little power which puts the gun in as a small-game number only. In the $350 ballpark, the 1849 is generally going to be higher in price over more conventional offerings.

The 1848 Dragoon series is the exact opposite of number five. Whereas the 1849 is small and light in punch, the Dragoon was one of the most powerful handguns ever issued by a military power.

While the 1847 Walker is more iconic, they weapon was far from perfect. Grunts on the ground during the Mexican War discovered that it was liable to blow up with maximum loads. It was also heavy and the loading lever tended to drop under recoil. 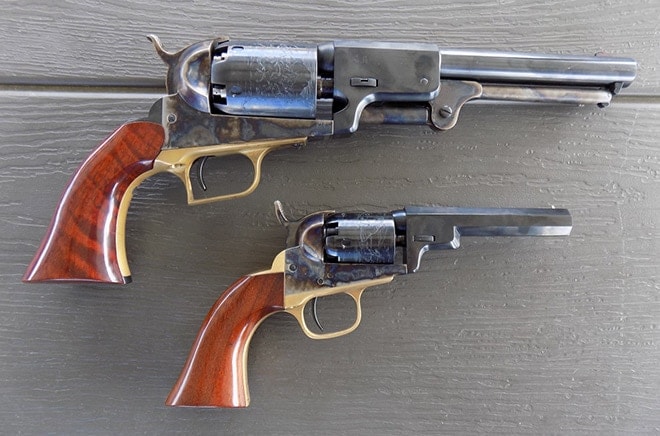 Everyone likes a hand cannon. Between the Dragoon and the famous 1847 Walker of Josey Wales fame, the Dragoon is a much better handgun. (Photo: Terril Herbert)

The Dragoon represents a successful improvement on the Walker, digesting a still massive 50 grains of powder and firing the same 44 caliber bullet. It was still just over four pounds in weight, but the loading lever was now more firmly secured with a spring-loaded latch near the muzzle. The Dragoon was a far more successful handgun, staying in official service with the US Army until 1860.

Today, the Colt Dragoon series are in replica form but look every bit as formidable as any original and built from stronger steel. These massive handguns will push a 140 grain .454 inch diameter ball or a 200+ grain conical bullet to the 1000 foot per second mark with maximum charges putting this gun easily into deer taking territory. For target work, you can elect to load down the charges—a little appreciated benefit to cap and ball revolvers in general.

The downside to the Dragoon is that it is heavy. This piece of iron wasn’t intended for holster carry and you may grow tired of holding onto the gun after a while. Using maximum loads all the time can also put more wear than necessary on the barrel wedge that holds the gun together. The Dragoon is also at the upper limit when it comes to price, though still acceptable compared to the more exotic offerings mentioned earlier with a ballpark retail price of about $400-450.

One of the most popular handguns of the American Civil War, especially after its introduction in 1863, the Remington New Model Army, aka 1858 Remington was a handgun remarkably ahead of its time. Its solid frame made it mechanically stronger than the Colts and less prone to cap jams that can sometimes plague Colt reproduction revolvers. It packs six 44 caliber bullets backed by 30-35 grains of black powder and looks very much like a modern revolver. 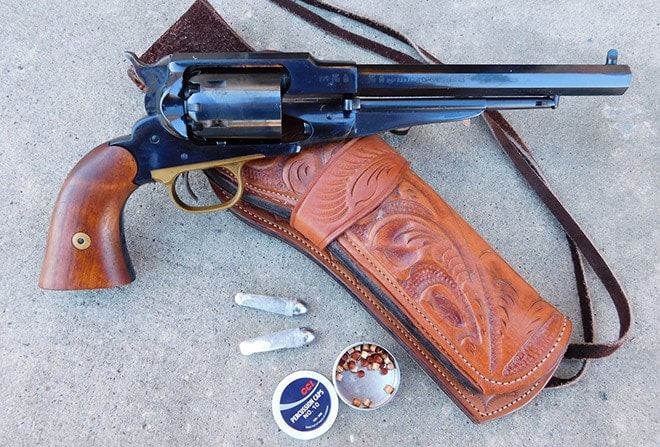 The 1858 Remington boasts a modern design appreciated by modern shooters. But it was a little too ahead of its time. (Photo: Terril Herbert)

The Remington has modest recoil for its caliber, especially compared to the big Dragoon, and the groove and post sight system is better than the diminutive Colt sights that rely on a front bead sight and a notch in the hammer face. The cylinder pops out easily with the Beals Patent cylinder pin being pushed out of place after dropping the ramrod. This allows you to quickly reload with spare cylinders, though this wasn’t practiced in the 19th century.

Though the Remington’s solid frame makes it desirable, there are some trade-offs. Black powder residue builds up more quickly, making the gun unusable after a few cylinders without the remediation of a towel to wipe things done.

With that said, the Remington is a sleek, reliable design that can be had anywhere from the $200-350 mark with some variants using stainless steel construction to appeal to the modern shooter. Parts support from this point in our list also picks up with outfitters offering more options from our top three than any other reproductions.

The main sidearm of the US Army from 1860 to 1873, the Colt 1860 Army was and still is a hot item. The 1860 packed 44 caliber firepower in a package that is nearly half the weight of the previous Dragoon series of revolvers.

The Colt 1860 is a solid contender whose resistance to black powder residue gives it the nod over the 1858 Remington. (Photo: Terril Herbert)

The 1860 boasts the same firepower offered by the Remington and, as such, recoil is modest. Over its main competition, the Remington, the Colt 1860’s open mechanism mitigates black powder fouling very well and the gun’s extended Navy-style grip allows for the gun to have superior balance. Found in the $200-300 range, the 1860 Army is a good, economical and realistic fit.

The Colt Navy was the standard issue handgun—or at least as close to standard issue as there was—of the Confederacy during the American Civil War. This was Colt’s first attempt to make a true holster carry handgun. Though not as technologically advanced as the Colt 1860 that would follow eventually, the 1851 was roughly the same size but bored for 36 caliber, intended for Navy use. Due to availability, durability, and ease of balance, the Colt Navy was the choice of outlaws and lawmen well into the cartridge era. In fact, the Navy-style grips would later be used on the legendary Colt Single Action Army revolver that would come to tame the West in the cartridge era. 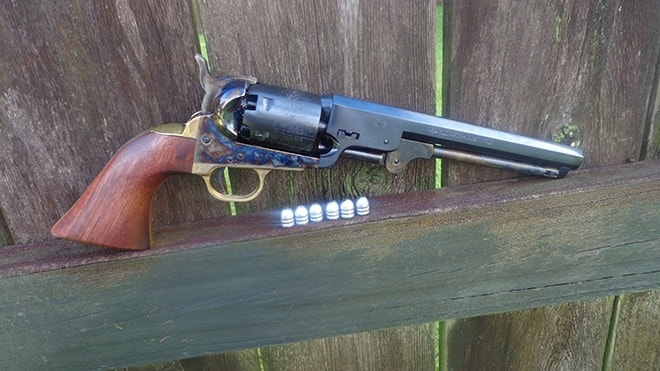 The Colt 1851 Navy. My pick for the best cap and ball revolver. It’s shooting and handling characteristics make it a popular choice today, as it was in the 1860s. (Photo: Terril Herbert)

Today, replicas of the 1851 are available in 36 and 44 caliber. The 44 caliber guns are quite good, but not traditional. The 36 caliber Navy offers that legendary balance with a shorter grip than the skinnier Army. This makes aiming and touching off the trigger easier for smaller stature and new shooters. The lack of recoil accompanying 25 grains of powder over an 80 grain ball or 130-40 grain conical bullet of .375-.380 diameter is astounding, though it is more than a step up from the little 31 caliber pocket pistols with enough power for small game and varmint. In terms of shooting economy, the 1851 burns up less fuel than any 44 and shooting can be done cheaply, but with enough of a bang to feel that you are shooting a real gun.

The modern-day popularity of the 1851 Navy have kept the prices of complete pistols and spare parts low, with pistols running anywhere between $200-350.