The Browning Hi-Power: Everything that God and John Browning intended it to be 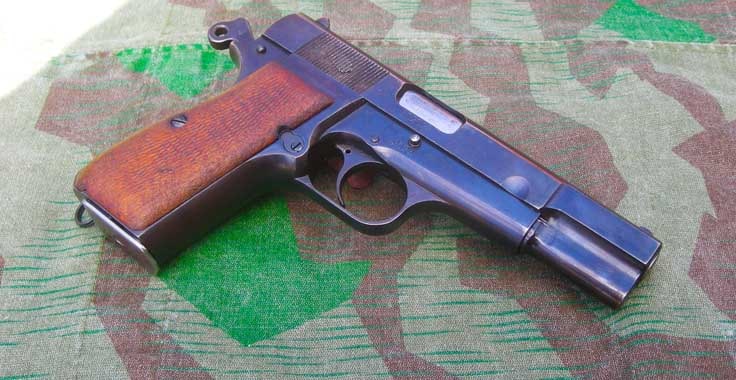 This pistol if FN great. (Photo by F. Borek)

On Nov. 26, 1926, John Moses Browning passed away at his workbench in Liege, Belgium. His final completed design was the Superposed over/under shotgun. When he died, however, the design he was working was not a shotgun, but the original Wonder-9.

Efforts for the design began when the French put forth the requirements for a new pistol.  The American and German auto-loader pistols must have made an impression on the Grand Quartier Général because the French fielded a variety of revolvers and small auto-loading pistols during the Great War.

France fielded the RSC M1917 semi-automatic rifle, so they were at least aware of weapon innovation, though they quickly forgot lessons learned by 1937. However, after World War II, the GQG, having nothing but negative experiences with domestic weaponry established criteria for the next sidearm for the French military. These criteria where the basis for the Browning Hi-Power’s features.

The pistol had to be compact, hold at least 10 rounds, have a magazine disconnect an external hammer a positive safety, be simple to field-strip and lethal at 50 meters. FN-Herstal put Browning on the task and Browning decided the best caliber for the job would be the 9mm.

He tried out a number of designs, due to all the M1911 patents being held by Colt. He developed blowback designs and recoil designs and was constantly refining his design. Even after he died, his assistant Dieudonne Saive continued to work on the design, eventually creating the Hi-Power’s 13-round magazine. In 1934, the pistol was completed, but the French adopted the Mle. 1935 pistol in 7.65mm French Longue. Belgium adopted the Hi-Power and its history took off from there.

The Browning Hi-Power has been something of a dream gun for me. I lusted after a Hi-Power. It’s no nonsense, stylish looks, 13-rounds of 9mm and the tales that it is one of the finest pistols ever made appealed to me.

In an age when every gun website or magazine talks about Smith & Wesson M&Ps, Springfield XDs and Glocks, the blued steel and walnut grips of the Hi-Power showed style and panache that polymer framed pistols lack.

John Browning’s designs are universally praised, but for some reason it was his final design that appealed to me the most — more than the M1911, the Superposed or the 1886 Winchester. The one thing that always kept me from jumping on the Hi-Power wagon was price. New Hi-Powers cost around $1,000 and used examples in good condition, if you can find them, go anywhere from $500 to $800.

I stared longingly at the Hi-Powers, both new and used, in the cases of my local stores. Some had walnut grips, some had black plastic grips, some were made in Belgium and others in Portugal. It didn’t matter to me, I wanted one all the same. Still I knew that I couldn’t afford a Hi-Power, so I had to remind myself: “someday you’ll have one.”

One day in late November, a local gun store posted their annual Black Friday newspaper ad to its Facebook page. Looking over the ad I saw police trade-in Berettas, Glocks, HKs, brand new PSLs and M1As. There were inexpensive shotguns and revolvers, and at the very bottom in bold letters shouted “EARLY BELGIUM MADE FN HI-POWERS”. Under a picture of a Hi-Power was the price: $389. I was shocked. For the first time in my life, a Hi-Power was within my reach.

The store on Black Friday at noon was the most crowded I have ever seen it. Armalite AR15 police trade-ins for $500 were sandwiched between a row of PSLs and AKMs. Mossberg 500s and a Remington Model 11 in riot configuration lined the walls. Arisaka rifles sat next to a row of Yugo Mausers, while a MAS-49/56 sat next to a MAS-36, which was still wrapped in arsenal refurb paper. Despite these attractions, everyone was concentrating on one thing: the Hi-Power.

As fast as the employees could bring them out, they were selling them. I traded in a Ruger Single-Six, while a staff member brought out the three Hi-Powers he could find. Two of them had black plastic grips and no lanyard ring, but the one that had the most wear and a lanyard ring had wood grips.

The story and the reality 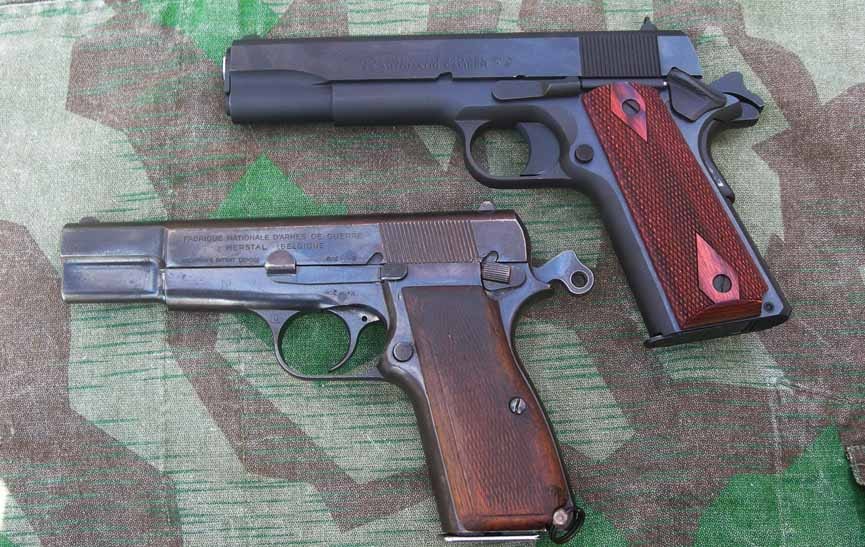 The HiPower pistol and its grandfather, the 1911 (Photo by F. Borek)

The Hi-Power I have is a first generation E-series Hi-Power, meaning the serial number starts with an “E”. There are numerous explanations for this “E”. One story suggests the guns were part of a series of police and civilian distributor contracts across Europe for British Intelligence. Another rendition was that the British government contracted the pistols and the overrun pistols were sold to French and Australian police.

Regardless of its origin story, the Hi-Power I have is an elder model, since it is a first generation model with an internal extractor. This changed to an external extractor in 1962, along with a “thumb print” on the right side of the slide, a ring hammer and a lanyard ring.

The blued finish is still present, though under sunlight it appears much of it is turning brown and there is some wear present. The grips were soaked with oil and grime, but were easy to clean. A lanyard ring is present along with the noticeable wear by the muzzle, which leads me to believe that this pistol rode inside a police holster for much of its life. The sights are fine, but can be hard to use for the first time shooter.

The proof marks on the frame and barrel are still present. The pistol came with one 13-round magazine produced by Mec-Gar. It is a typical surplus pistol. There is plenty of finish wear from riding inside of a holster for many years, but the internals are in good shape and the slide is smooth to rack and locks up tightly.

79 years young and she can still dance

Disassembly is simple. Safety check the pistol. Pull the slide back until the safety tab can be raised into a notch into the slide. When you lock the slide in place, push out the slide release lever from the opposite side. Unlock the slide, and push it forward and off of the frame.

On the range the 9mm Hi-Power is accurate and soft shooting. However, the fine sights need practice to use effectively and the trigger is a little heavy for a single-action. Surprisingly, someone removed the magazine disconnect in my pistol, so despite its heavy weight, the trigger is crisp. The controls are in the same spots as a M1911, exactly where God and John Browning intended them to be. If your grip is high on this older Hi-Power, you might experience hammer bite from the older style ring hammer.

The pistol is very reliable and ate up everything I fed it, including 115- and 124-grain FMJ loads. Due to its older design, it might have trouble feeding hollow points. For individuals interested in using the Hi-Point for self-defense, soft points shouldn’t be a problem.

The Hi-Power is a fine choice as a range gun, and can be comfortably placed into the role of a defensive handgun with its reliability and 13-round magazine. The lack of a rail on the handgun might cause tactical elitists to turn their nose up at the gun, but it can still get the job done.

Overall I’m happy with my Hi-Power, it has made the list of guns I can never sell. The gun fits perfectly in my hands and I love the history it carries. The explanations for the E-series contracts make the history even more intriguing. The Hi-Power is an excellent design and without it, we wouldn’t have any of the modern handguns that we do today. It might not have all the tactical chokes of many modern handguns, but just because it’s old, doesn’t mean it can’t get the job done.

The Hi-Power has got the job done since 1935, serving in countless conflicts and has done it with style and reliability. There is no other gun out there like the Hi-Power and if you ever see one for a good price, pick it up. I guarantee you that it won’t be there tomorrow.