The Canik TP9SFx is the companies first entry into the competition ready handgun market and it certainly makes that entry in style! Loaded with features that are usually only available as aftermarket add-ons, this pistol gives the novice or veteran competition shooter everything they need all in one sweet Tungsten Grey Cerakoted package. So let’s take it from the top and go through everything that the TP9SFx has to offer.

What’s in the case

The pistol ships with a well-made plastic case that has a plethora of accessories included. There is a bore brush, cleaning rod, a paddle holster, two 20 round magazines (made by Mec Gar), a speed loader, a large backstrap, three size options for magazine releases, four total optic mounting plates, a small case of screws and allen wrench, an ambidextrous charging lever, spare orange and green fiber optic rods for the front sight and a trigger lock. That’s a lot more that ships with this pistol than you’ll find with most manufactures. To make all of this even better, the pistol and all those goodies retail for less than $600.

The pistol itself has a 5.2-inch barrel so the slide has been extended proportionally and features forward slide serrations and lightening cuts and ports along the front of the slide. The slide is finished in a Tungsten Grey Cerakote and features Warren Tactical U-Notch rear sight and a Fiber Optic front sight post. The slide stop lever is extended to give the shooter extra purchase for ease of use. The grip of the pistol has raised texturing on the front and backstraps and a stippling like texture on the grip panels which give it a comfortable, yet firm feel, in the hand. 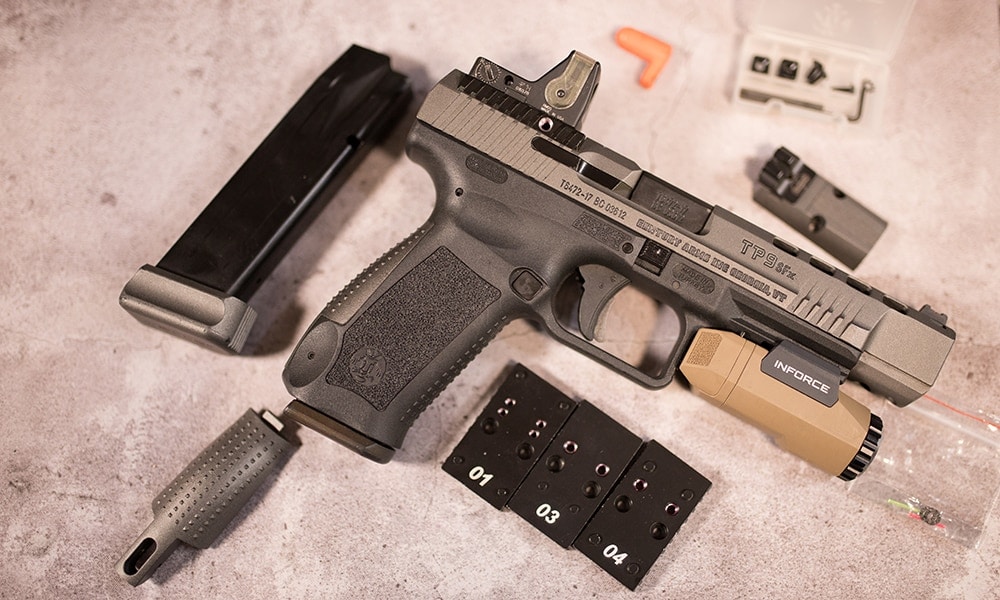 The SFx come with an impressive amount of add-ons. (Photo: Chase Welch/Guns.com) 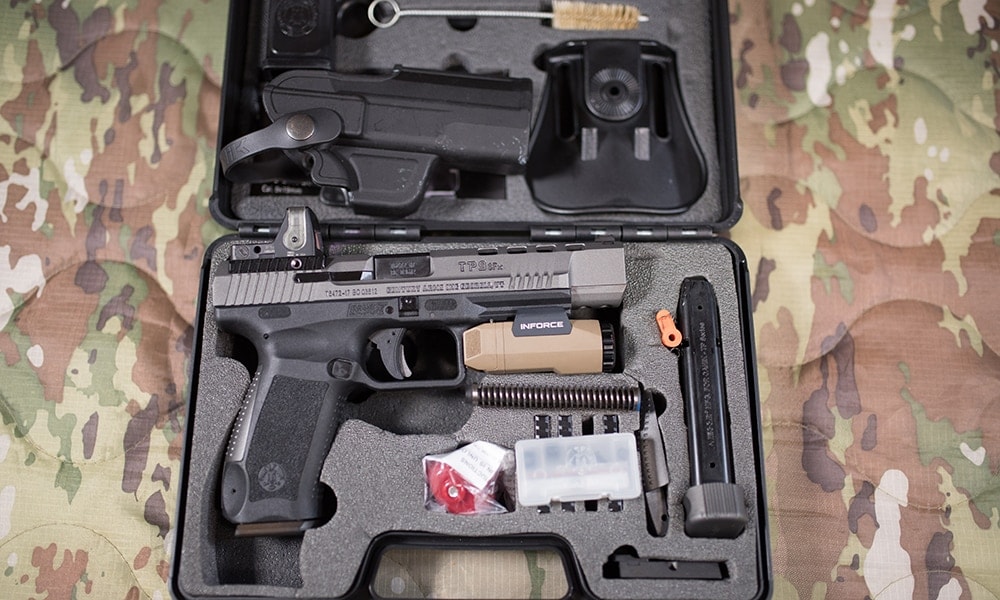 The SFx is a complete kit for those looking to get into competition shooting. (Photo: Chase Welch/Guns.com)

One cool side note about the magazines. The SFX ships with two 20 round magazines that are really the standard Canik 18 round mags with a “plus 2” baseplate attached.  If you find yourself in need of more magazines you can use the baseplates to modify Beretta 92 mags to fit the SFx without affecting their ability to function in the Beretta 92. Unloaded the pistol weighs in at 1.83 pounds, with an overall length of 8.27 inches and width of 1.37 inches.

Having reviewed a TP9SF Elite before I was excited to put the SFx through its paces and see how it held up, I was not disappointed at all. After adding a Trijicon 6 MOA RMR and loading up the 20 round magazines with Freedom Munitions 115 grain FMJ, I headed to the backyard to let some freedom ring! The SFx feels great in the hand, solid and balanced, and for me pointed very naturally. Being a “competition” or “race” gun, Canik decided to lighten the trigger up to right at a four-pound break with a very short take up. I’ve been really happy with Canik triggers so far, for striker fired pistols the trigger is about as good “out of the box” as you can get. The triggers in my other striker fired pistols have all required aftermarket add-ons and break in periods before they were this smooth, not so with the Canik. Quick follow up shots were a breeze and there seemed to be a bit less muzzle flip with the SFx compared to the SF Elite. This may be due to the longer barrel and slide of the SFx or just my increasing familiarity with the Canik family of pistols.

I am not typically a Red Dot kinda guy when it comes to pistols, mainly because I haven’t had the extra cash on hand to modify one of my slides. So it took me a few magazines to get used to finding the dot quickly, but once I did, man is that a fun pistol to shoot! Inside of 25 yards it’s almost like playing a game. The gun comes up, the dot goes on the target and the shot breaks just as easy as breathing. Target transitions were no problem either since, as I mentioned before, there is almost no muzzle flip to disturb the sight picture. The gun is advertised as having a “match grade barrel” and even with my less than stellar shooting skills I believe it. 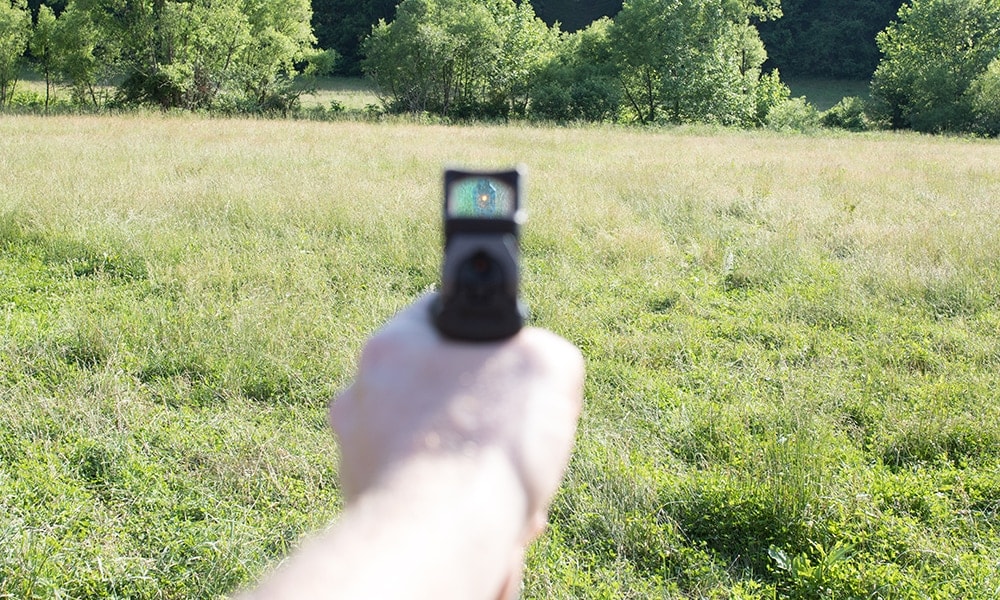 The SFx has pleasing lines and a full size frame allowing shooters of all sizes to get a full grip for maximum recoil control. (Photo: Chase Welch/Guns.com) 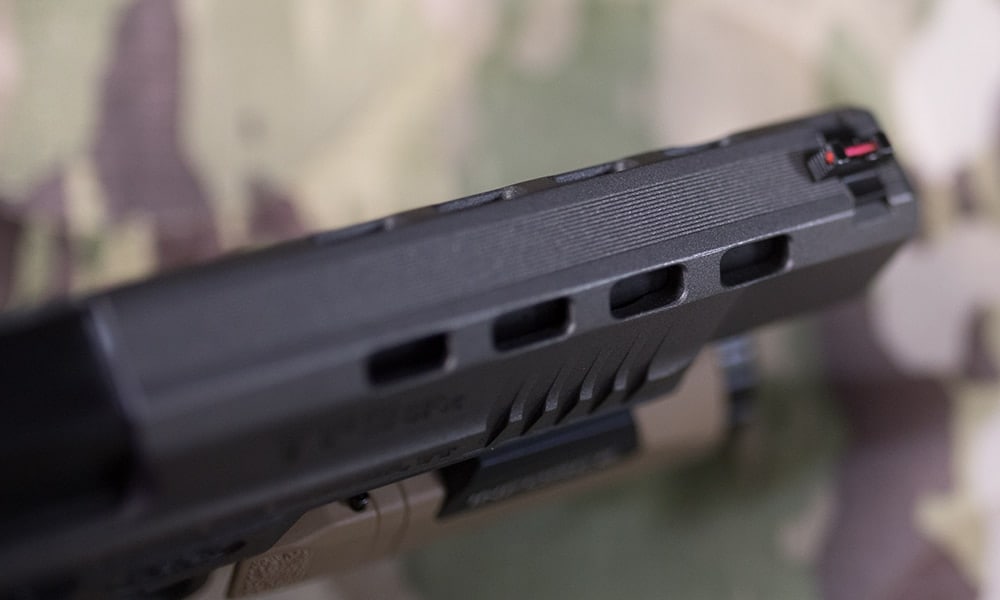 The SFx ships with a high visibility red fiber optic sight as well as a green fiber optic rod if the end user prefers that color. (Photo: Chase Welch/Guns.com)

After I got through beating up my H.I.T.S. Targets steel plates, I moved on to a standard B8 target at 25 yards where the pistol was putting in 1.75-2 inch groups with no problem at all. The only issue I had with the pistol was a few failures to lock back on an empty magazine. But after a bit a thought, and reviewing the footage, I realized it was my left thumb overriding the extended slide lock. After fixing my grip the issue went away completely.

A note on the holster; while it is just fine for plinking at the range or maybe entry level competition, if you’re going to put in serious work with this pistol you may want to consider an upgrade. That being said it’s pretty sweet that Canik includes a holster in the first place!

Lastly, depending on the type of competition you’re going to shoot, if that is why you decide to pick up an SFx, be sure that the stock features of the gun meet the requirements of the kind of competition you are trying to enter, i.e. slide ports, optics, etc. It would be less than fun to buy a gun, sign up for a match, and show up only to find out that your gun does not meet your class requirements. Pretty much, like everything else with firearms, be prepared and train for the scenario. 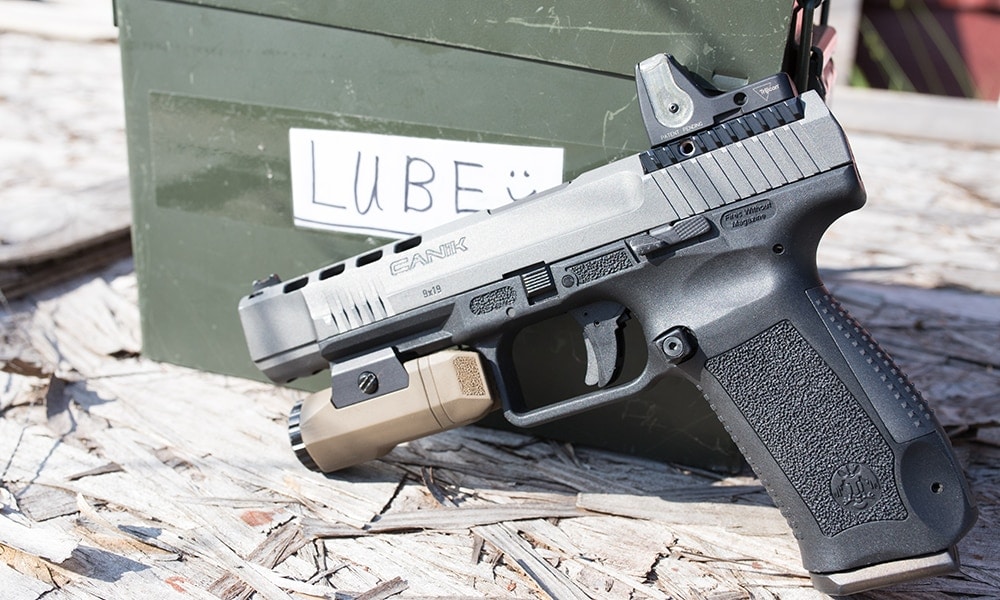 The SFx has pleasing lines and a full size frame allowing shooters of all sizes to get a full grip for maximum recoil control. (Photo: Chase Welch/Guns.com)

Overall I find myself quite impressed with Canik’s first foray into the competition pistol market. The SFx is absolutely loaded with great features, feels great in the hand, and shoots even better. Everything you need to get into competitive shooting, home defense, or just plain fun at the range is included in one box. I was impressed by the accuracy and really love the trigger too. Top that off with 20 round magazines and you’ve got a pistol that stands up against many of its more expensive competitors. Even with its low price point I wouldn’t really call this a “budget gun” at all. It’s well designed, well made, and ready for whatever use it’s put to.