The technology behind revolvers has remained virtually the same for the last century. Sure, there have been improvements in metallurgy, allowing for larger calibers and improved iron sights, but the mechanics of the design are unchanged. On a current Smith & Wesson revolver, the three main components — frame, cylinder and barrel — and the way they interact is the same as a revolver made 100 years ago. Of course there are exceptions, such as the Mateba MTR-8 and 6 Unica, but, for the most part, they aren’t commercially successful and are astronomically expensive.

What’s a guy to do if he wants a one of a kind revolver without paying over $2,000? Grab a Chiappa Rhino.

Originally imported for CCW with a 2-inch barrel, shooters can now purchase 4-, 5- and 6-inch variants. The latter two are the focus of this review. I planned to review a practical, traditional black finish Rhino and stainless Rhino. That is until SHOT Show where I discovered Chiappa offered a gold Rhino.

It’s not normally my style to rock a futuristic gold revolver with a 6-inch barrel, but it was too awesome to pass up. Some may denounce the modernist appearance of the Rhino revolvers, but I’m a huge fan and I feel their unique appearance gives them character, something sorely lacking in many contemporary designs.

Why does the Rhino feature that iconic pronounced proboscis? It fires from the bottom cylinder. This lowers the bore angle to better align with the shooter’s arm and reduce felt recoil, much like 1911 shooters that adopt a higher grip. While It definitely soaks up recoil from hefty .357 Magnum loads, the trigger’s weight and smooth face combined with the grip’s size and construction hold it back from sweeping the revolver market.

A wide trigger, like the ones found on Rhino revolvers dissipate the force exerted by the trigger finger, making it more comfortable, but requiring more effort. When trying to manipulate an already heavy trigger over a long distance, any additional resistance will tire out the majority of shooters after a dozen rounds. Consequently, for fast double-action/combat shooting, a narrow trigger is preferred, because it decreases the amount of force necessary to manipulate it.

An old school of thought concerning revolver-shooting was that double-action was a waste of ammo and only utilized in an emergency. Therefore, the extra-wide trigger and its predecessor, the archaic trigger-shoe, were designed to make single-action shooting easier. For double-action triggers, especially those with multiple bearing surfaces like the Rhino, this wide trigger is a downside, because it hinders fast, accurate double-action shooting. Especially in conjunction with the long reset of the Rhino’s trigger.

For the vast majority of shooters, this doesn’t matter. Look at anyone on the range with a double/single-action revolver that isn’t used as a carry gun, 90 percent of people are cocking the hammer before shooting. Although it’s more accurate for most sportsmen, single-action shooting is an inferior way to use a revolver for CCW and self-defense. It’s slower and requires fine motor skills — Miculek not included.

In single-action the Rhino truly shines. The wide, comfortable trigger and low-bore axis make the odd-shaped six-gun more accurate than most shooters. Firing from a rest at 10 yards, I was able to get four out of five rounds touching on a regular basis.

The integral top rail on the 60DS model accommodates a boundless array of optical sights and the bottom rails on both models allow for flashlights, laser-sights or tiny bayonets. This makes both models extremely versatile in terms of modern accessories, especially when compared to standard revolvers.

The Rhino falls just short of greatness in the design of the grip. The angle is functional, but odd and the shape is ill-suited to double-action shooting, especially if you have small hands. This is due to the beveled front strap of the grip. The rounded edge needs to be more aggressively de-horned, especially when coupled with wooden grips and .357 Magnum loads. During testing I found that the recoil of the Rhino was perfectly acceptable in terms of how the pistol interacted with my wrist and palm, but mercilessly pounded on my index finger. I assume rubber grips would do much to alleviate this, but were absent on the review models. 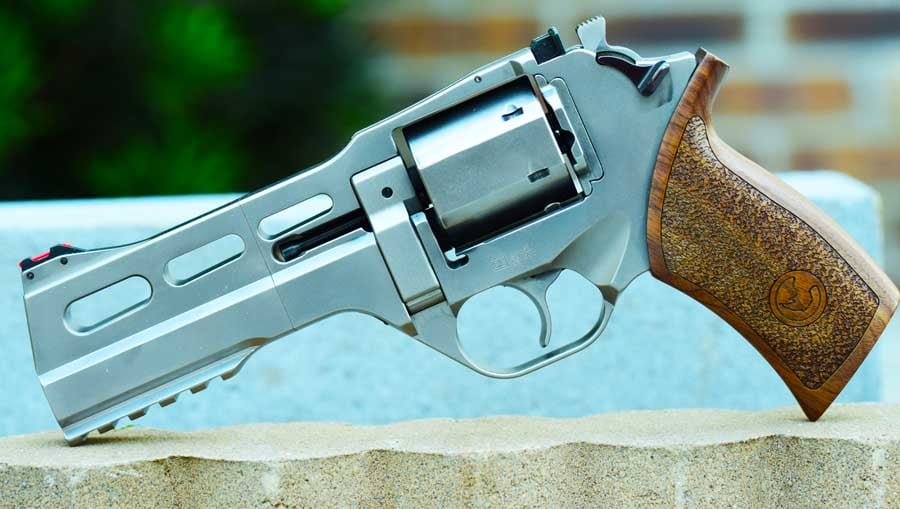 The Rhino 50DS looks dashing with its chrome finish. (Photo by Jim Grant)

The 50DS and 60DS ran circles around my automatics in terms of accuracy and were on par with my Smith & Wesson performance revolver. I’m able to place multiple rounds that were touching in every group at 30 feet. If you do you part, the Rhino will hit where you aim — even though its ergonomics will fight you the entire time. The Rhino’s biggest issues arise from the fact that its designer employed a trigger meant exclusively for single-action target shooting, not double-action combat shooting. Additionally, when a handgun’s main selling point is its ability to mitigate recoil, wooden grips are a poor (read: painful) choice. Nevertheless, it’s not all bad. The low axis bore and forward angle grip undoubtedly help soak up the stout recoil of a .357 Magnum, despite the alloy-frame’s light weight.

The quality of the materials used, combined with the historically profitable business of buying any of Emilio Ghisoni’s designs means that buyers won’t lose money on the Rhino. In other words, there is no depreciation in value. With the Rhino you certainly get what you pay for, even if the design isn’t for everyone.

Comparing the Rhino’s aftermarket support to that of a traditional six-gun presents a bit of a problem. Smith & Wesson revolvers have been around for over a century, so the Rhino has a lot of catching up to do. If the Rhino becomes more popular, its aftermarket selection will grow. As it stands, it’s fairly limited. There are enough holsters to satisfy most shooters, but the grip selection is quite slim. On the other hand, every sight you could ever wish for is available for the Rhino, including both magnified and electronic ones. These Chiappa revolvers are so close to perfect and having a few facets of the design derail the entire weapon’s reputation is incredibly frustrating. As it currently ships, the Rhinos need some tweaking to be a suitable replacement for traditional DA/SA revolvers. Namely, the ergonomics of the trigger width and the grips.

The 50DS and 60DS Rhinos have a tremendous amount of potential and if the small hiccups were fixed, I would definitely add one to my wheel gun collection.