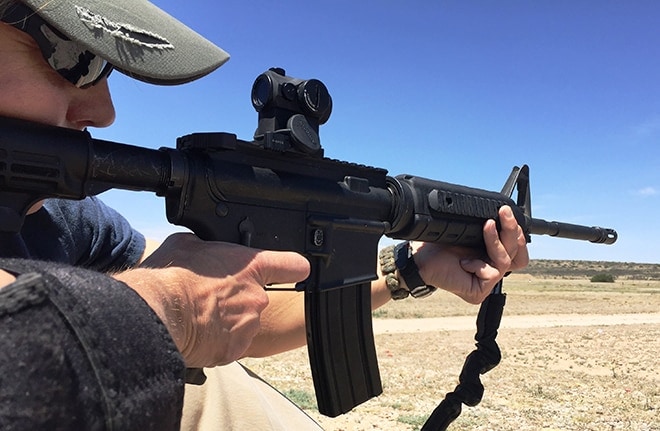 Since 1973, Okay Industries has supplied these magazines to US government agencies, but they weren’t available for purchase elsewhere. In late 2015, the company started offering the mags commercially to manufacturers, law enforcement agencies and civilians.

In this test, we put a workout on several Okay Industries’ SureFeed magazines made for the AR-15. 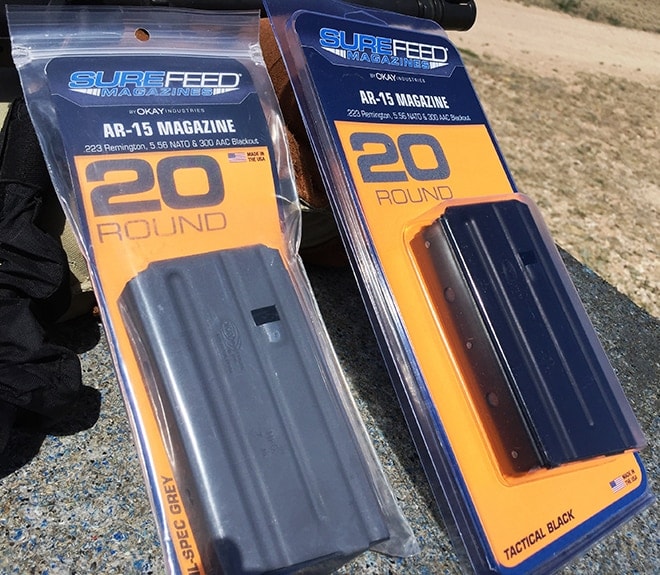 The company supplied 10, 20, and 30-round magazines for the range trial.  Each one was presented in two different types of packaging—one of sealed hard plastic, one a soft plastic bag.

I don’t give a flip about packaging as it has nothing to do with function and protection for battle or competition gun equipment. Both adequately keep dirt out of the mag until you’re ready to get it dirty. 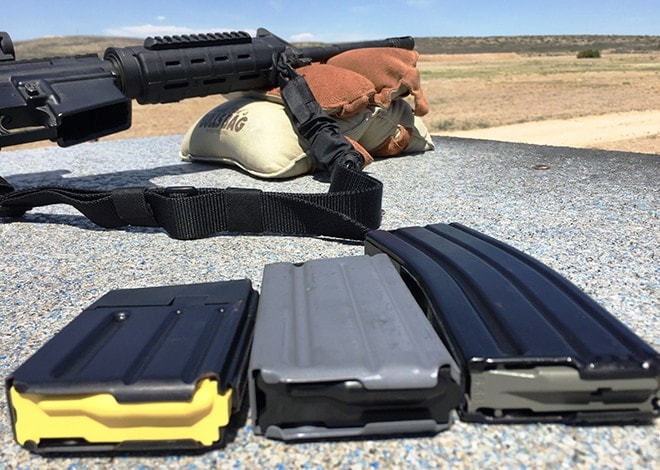 On the outside, the mags are finished in either flat black or gray.  The aluminum hulls and floor plate are hard-coat anodized and are heat treated to military specifications. 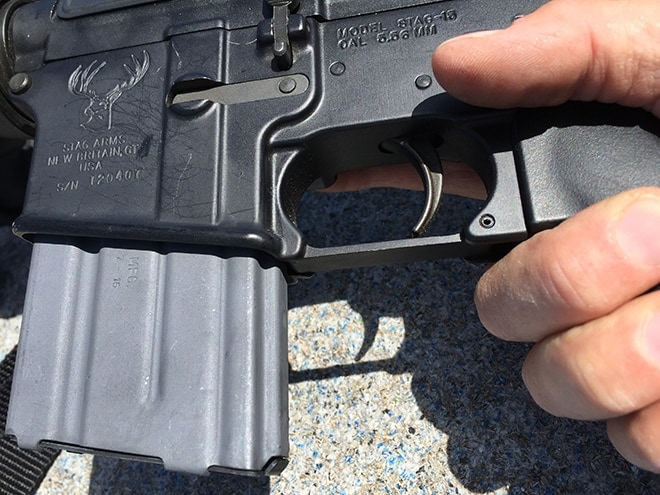 SureFeed mag followers are said, by Okay Industries, to be non-tilting and made from “self-lubricating, non-hydgroscopic resin.”  Some research into hydrogroscopy revealed a possible advantage of SureFeed magazines over polymer ones.  Hydrogrospic material not only repels water, but dries faster and doesn’t hold moisture—a very good thing for any ammo that might be stored inside.

Inside, a stainless steel, mil-spec spring keeps the follower properly tensioned.  We didn’t venture to take a mag apart and look at the spring, since they functioned perfectly. 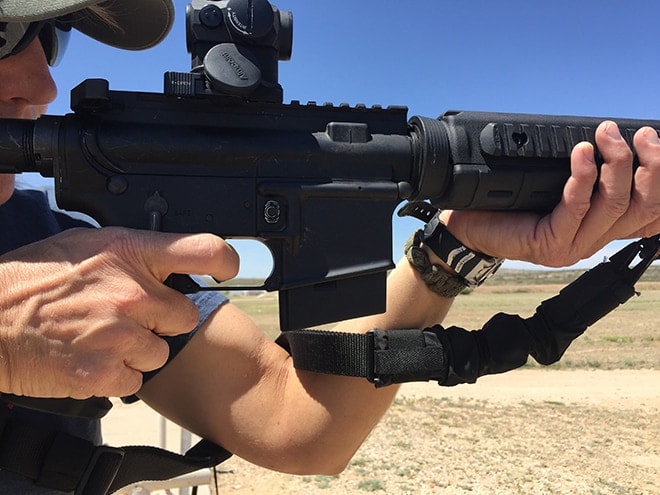 The ten-round magazine is so short, it has a plastic extension on the bottom to make it manageable. This mag made me feel sorry for my friends in California and other states that put capacity restrictions on mags.

Whether firing was slow or rapid, whether the mag was stuffed to capacity or had one round left, each size worked without flaw.

The texture of these magazines isn’t coarse but is definitely non-slip.  They seated in the AR easily and likewise released without issue, empty or not. 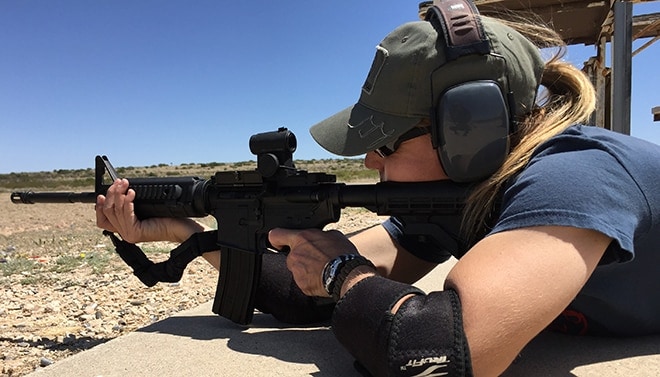 People who are concerned for cosmetic appearance should note that the floor of the mag will scratch when dropped on the ground or when used as a monopod on hard surfaces.

After receiving the new magazines, I discovered they’re actually the same as some aging 30-round military surplus mags that I’ve used for many years in practice and competition.  Those mags have stood up to hard use including being dropped on pavement multiple times and having floorplates pebbled with dents. 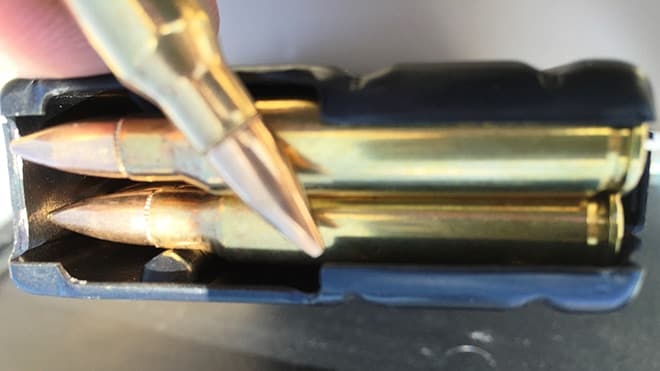 Lip is a bit sharp but not too bad. (Photo: Team HB)

The only small downside is a slight sharpness to the lips of the mag, which could slice fingers or cloth if rounds are loaded in front-to-back fashion similar to how a pistol magazine is loaded. Simply pressing the rounds straight down into the mag avoids this potential problem.

SureFeed’s brochure about these mags says “reliability is the most important quality for any magazine.” Range testing of these mags, both new and legacy copies, indicates they’re putting their money where their mouth is.  These mags have been extraordinarily reliable. 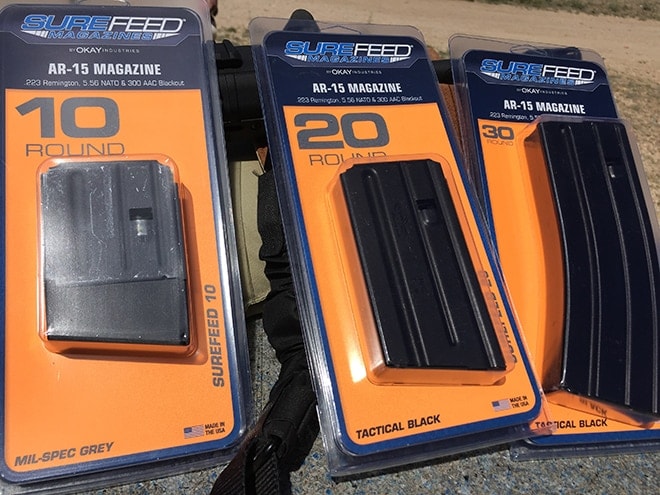 As a producer of equipment accepted for purchase by the US military for decades, Okay Industries knows a thing or two about testing and product consistency. Each magazine is subjected to a set of tests to ensure the welds are solid, feed lip tolerance is correct, and all materials meet manufacturing standards, and finally a function test.  Details of the tests are proprietary.

I am not a military veteran.  My training and work life has been gifted with many people who are.  In countless hours of conversation about equipment and what works and what doesn’t, I’ve heard plenty of complaints from veterans about guns and gear that don’t work well or tend to break by the time they’re needed. None of those complaints have been about these magazines. 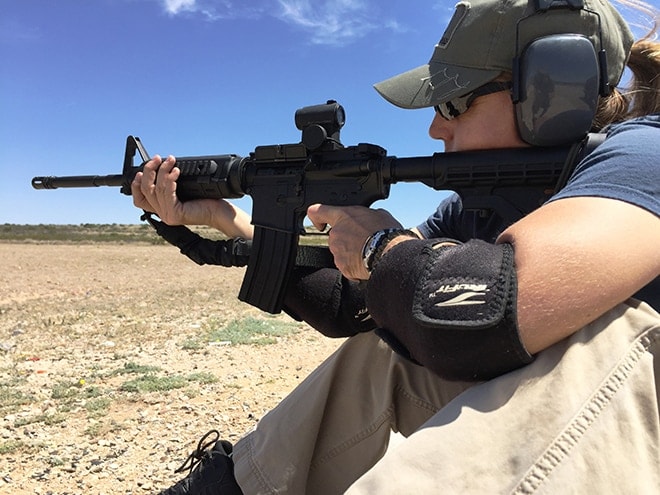 SureFire mags sell for less than $20 and are more than okay by me. (Photo: Team HB)

Okay Industries is producing a dependable AR mag with their SureFeed brand.  The company may have an uphill climb toward popular acceptance compared to that of a certain polymer mag. But, the SureFeed design has been proven over time to perform as well if not better, and is its material is less susceptible to age- and exposure-related damage than competing products.