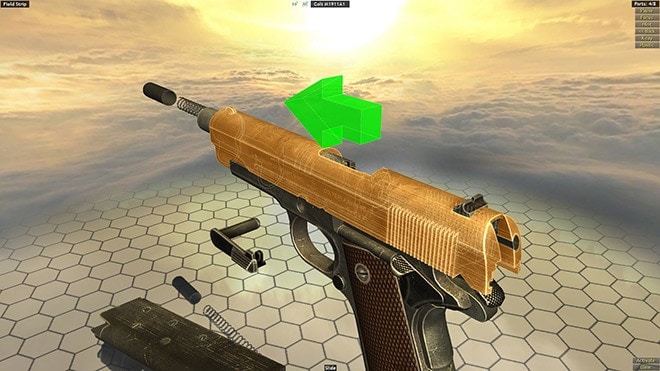 Taking apart a 1911 here for basic cleaning. You likely won’t need the program for this, but once you go beyond the basics it can certainly help. (Photo: Andy C)

I’m not ashamed to admit I’ve taken one of my guns apart and gotten a bit lost when trying to put it together. In my defense, it was a Chiappa Rhino (review to follow shortly). But sometimes, seeing videos and images doesn’t do the trick when it comes to figuring out where a certain pin goes, or the right way to insert it. This can lead to a lot of stress at best, and at worst, broken or misplaced parts.

This is where an unusual but handy piece of software comes in: World of Guns (WoG). I’m not much of one for high tech augmentations to my shooting hobby, but WoG has helped me out enormously on keeping some of my firearms in their best condition. 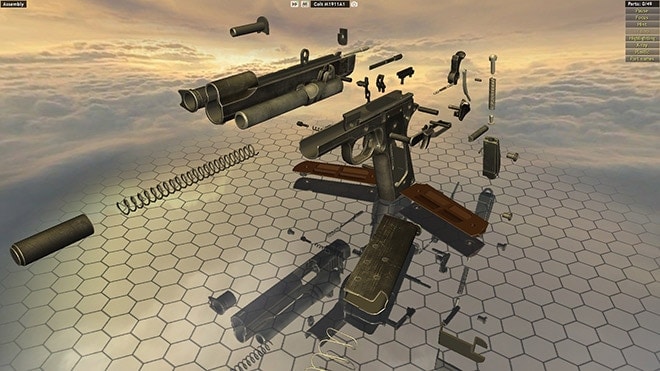 Here’s the same 1911 broken all the way down, and WoG can help you put your back together without missing a beat. (Photo: Andy C)

WoG is produced by a company called Noble Empire based in Russia. Essentially, it’s a collection of three-dimensional models of a variety of guns. The models include accurate internal parts, and along with this you get a manual for assembly or disassembly in appropriate order. These models are the core of WoG, and everything else about it revolves around viewing and manipulating them. The models exhibit the operation of the firearm so you can get an in-depth view of the various mechanical functions of the gun. It’s available for iOS, Android and the PC. In terms of minimum system specs and other technical information, you can find that here, but they’re extremely low. 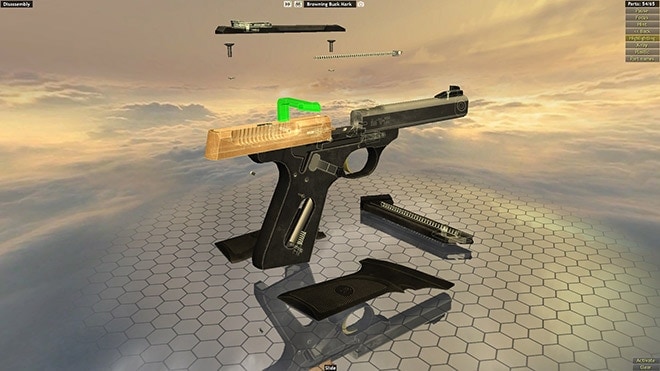 Buckmark – not a tough gun to take apart by any means, but it’s a free model of a gun a lot of people own, so a good way to see if you like the program. (Photo: Andy C)

The program is free — individual gun models are what drives the business. The program comes with some free models that you have full access to, and further models require individual purchases; they’re available for in-game ‘credits’. Some very common guns are available on the free side, so you can try it out risk free. Even if you want a model that’s behind the paywall, you can at least test out the interface with one of the free models before you take the plunge. 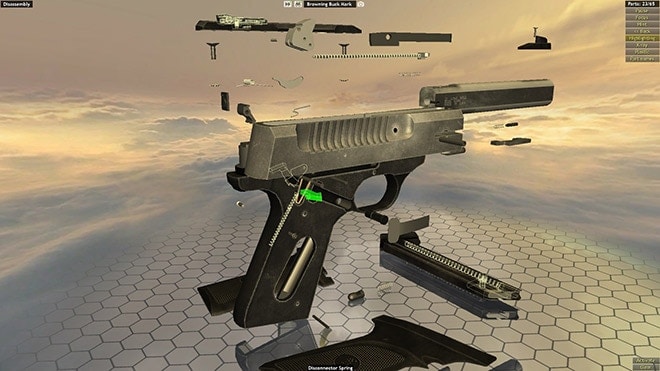 Once a gun is expanded, it can be difficult to see what you’re looking for or click on the right thing because of the parts overlapping. (Photo: Andy C)

Before I discuss anything else, let me say this program uses microtransactions extensively. It’s kind of annoying to engage in the ‘game’ elements to get ‘experience’ to unlock models, since for the most part, this is a ‘game’ like a math test can be a ‘game’. But by breaking up the program into small, individually-purchasable chunks, it parses out the overall cost of the software so you only get components you really want. 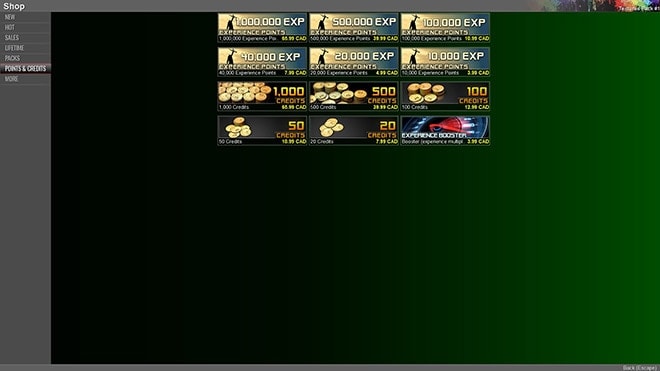 Some things require you to have in-game ‘experience’ that you get by completing inane tasks like flipping through all the X-ray views of a gun. For those familiar with the ‘achievement’ systems in many modern games, this program leverages that Pavlovian element heavily—except that this is hardly a game at all, so unless you’re a very specific personality I don’t imagine you getting sucked into trying to disassemble a 3D 1911 just to unlock another gun. 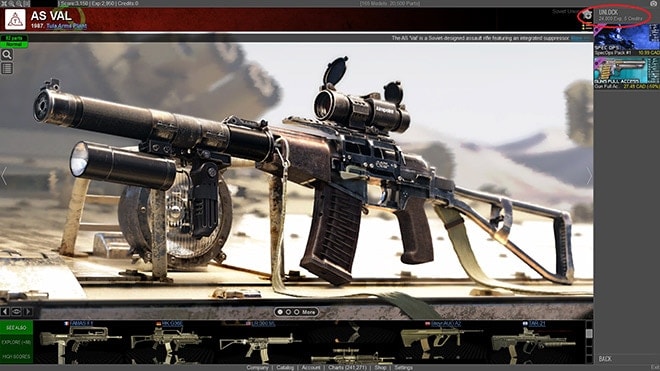 The bottom line is I feel the microtransactions are reasonable. To unlock almost any gun, you’re probably going to pay under $5. At that price you get an extremely comprehensive manual for assembly or disassembly of it, which I’m willing to pay for some rare and exotic guns with less readily-available information.

World of Guns is a sprawling spartan program that focuses on its core objective of providing highly detailed and accurate 3D models of firearms. Everything else is secondary, and it shows. Function overrides all other concerns with WoG. There’s no highly polished menu or huge range of options for customization. The interface is a bit rough around the edges. 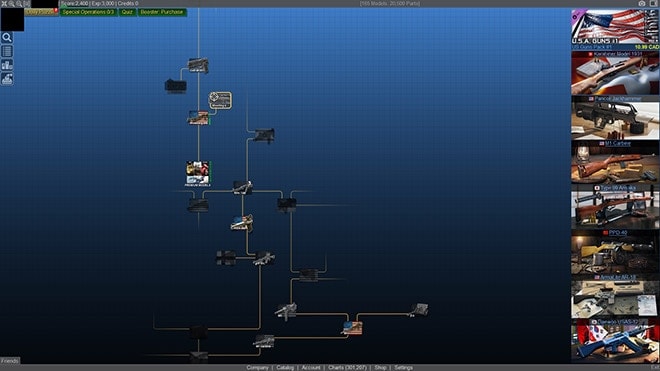 Not the most elegant U.I. I’ve ever seen. (Photo: Andy C)

After startup, you’re left with the somewhat-cumbersome main menu that displays guns in a branching web. This is part of the ‘game’ of WoG: some guns are loosely connected to others, and you can unlock ‘related’ guns by going through the features on each model. It’s not a super clean interface, but you can always skip the whole thing and easily search for the model you want.

The meat and potatoes of the program is the models. Each models can be viewed in various modes: 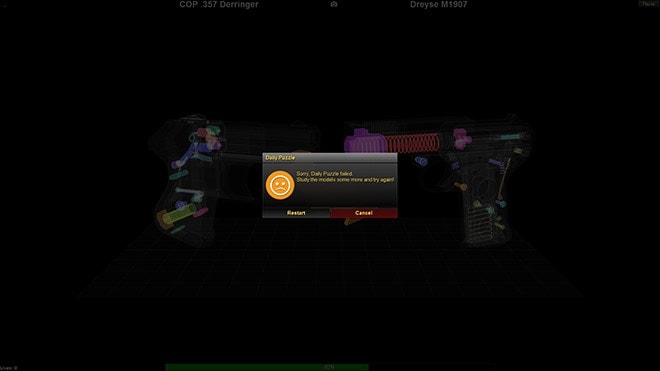 I couldn’t believe this mode was a real thing. I saw this screen a few times and decided it wasn’t for me. (Photo: Andy C)

Of the five, I’ve found only the “Disassembly” and “Assembly” modes to be of any practical use, but that’s why I have the program so that’s not an issue. WoG has all kinds of features to squeeze mileage out of these gun models outside of this. There’s ‘shooting ranges’ which feature the most rudimentary first-person shooting ‘action’ you can imagine, time trials, quiz modes, and all types of other junk. I’ll just say this material isn’t for me. 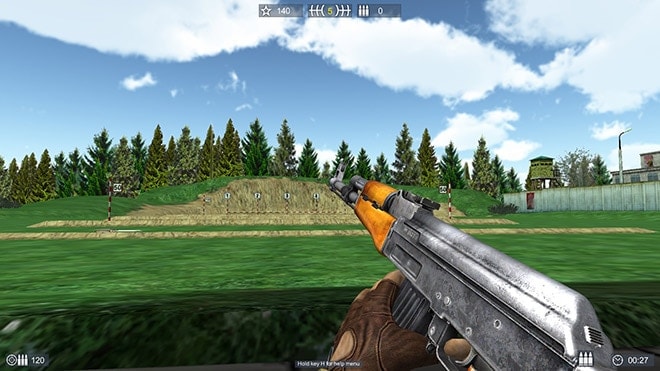 Tired of shooting games with action? This is your ticket. (Photo: Andy C)

But in that realm of a supplementary manual, WoG is outstanding. The guns I’ve taken apart using its guidance (even ones I know, ignoring my personal methods) have gone swimmingly. It keeps you from forgetting to put in a pin here or a spring there that ends up necessitating you take the whole thing apart again and spend a bunch of time looking for what you missed. 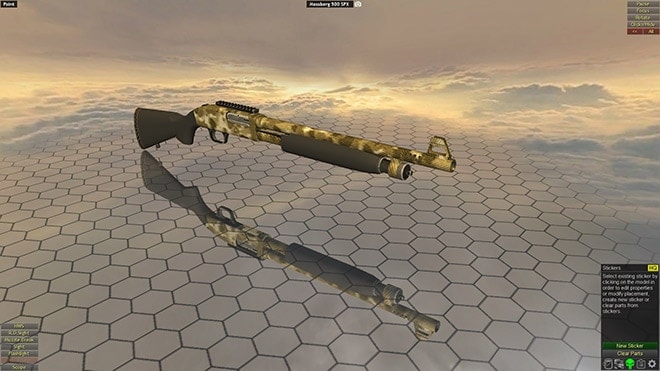 If you like the recolour your gun or ruin them with tacky stencils, this mode lets you reskin guns so you can try it beforehand and hopefully reconsider. (Photo: Andy C)

When I first got this program, I had a very specific purpose in mind: I needed an in-depth model that would show the inner working and assembly of a Chiappa Rhino, a comparatively rare gun I was a very early adopter of. At the time, there wasn’t much documentation on the gun online. For this, WoG works superbly. If you have a gun and think having a three-dimensional manual you can reference will help you keep the gun working, then the price of admission is likely worth it. 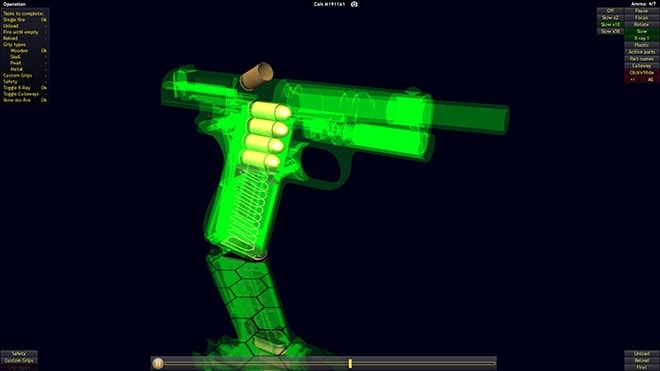 Otherwise, I guess this may satisfy people’s curiosity about some guns and how they operate, but those people are a totally different demographic from me. The “Game” mode is a chore in my eyes and I’m not too worried about the internal workings of guns I don’t and will likely never own. Usually my level of interest in such arcane topics is limited to the time span of a Forgotten Weapons video anyway. Additionally, I hate ‘grinding’ to unlock things, so obviously I’m not the target audience.

At the end of the day, when I buy a gun I usually check to see if WoG has a model of it, and if there is one, I’ll buy it. I don’t know if I can say anything more positive than that.

This is not must-own software for the majority of gun owners out there. But for people who can make practical use of what’s being offered, WoG provides a unique resource that it very affordable on a gun-by-gun basis. It’s far from perfect; the interface is rough, it’s menus are unrefined, and the music (I recommend during it off immediately) will make you feel like you’ve been on hold with a major corporation forever. But all these criticisms are peripheral to its central purpose, and the program does a great job of fulfilling its main role. 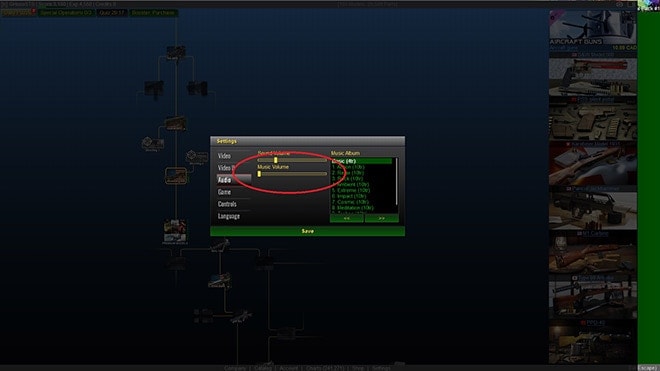 Other than that, consider the low opportunity cost of testing it out: zero dollars. It’s hard to go wrong there. It will even work on your phone! I tried it out and aside from my fingers needing a special dialing wand to work the delicate interface, it runs well. If Gun Disassembly 2 offers a model for a firearm you really want to get deep into, I recommend trying it out. It may save you a lot of aggravation later when the gun’s all put together and you’re staring at a single part still laying on the workbench.