When I first made contact with Serbu Firearms, I was looking for a Super-Shorty.  I’ve always had a soft spot for sawed-off shotguns.  Yet the ATF paperwork involved in legally transferring a Super-Shorty means we’re still waiting for that review.  To help us pass the time, Serbu suggested we review a rifle.  How could we refuse?

This exquisite beast is chambered in .50 BMG, which is California-legal.  The .50 DTC is also available.  It is a gas-operated semi-automatic with a 3-lug rotating bolt and is hammer-fired.  The rifle is magazine fed and takes standard M82 magazines.  The BFG-50A has dual plunger ejectors, a sliding plate extractor, and a hydraulic recoil buffer.

At 23 pounds, the Serbu is light enough to fire from the shoulder. (Photo by David Higginbotham)

The overall length is 51 1/2 inches.  It weighs in at 23 pounds, empty.  The 26-inch button rifled barrel has a 1 in 15 twist.  The “Shark Brake” on the end directs gas back from the muzzle at a slight angle (which should be easy enough to see in some of the video footage).  And if you are ever in the position of casual observer (or camera-man) don’t stand in the direct line of the Shark Brake’s gills.  Directly behind the shooter is your best best. 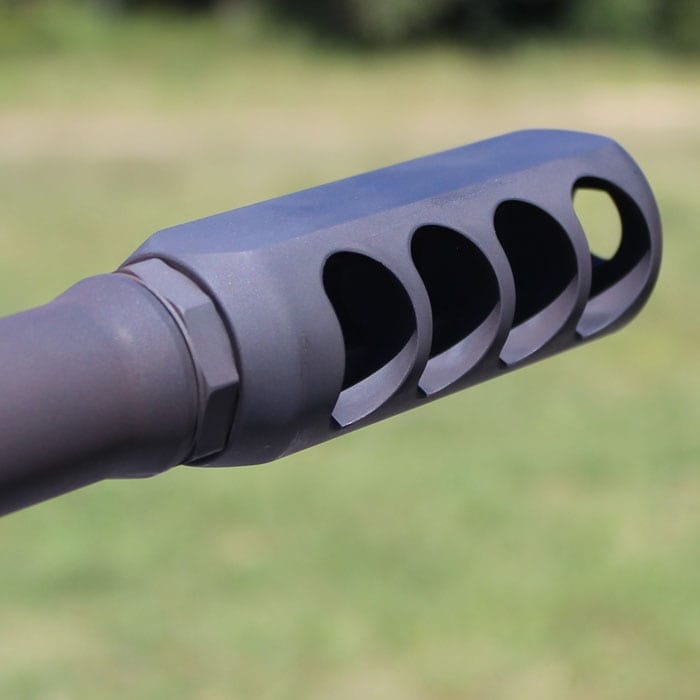 Don’t stand to the side of the Serbu. (Photo by David Higginbotham)

The fire control group and safety will be familiar to anyone who knows their way around an AR-15.  The trigger pull is right at 4 pounds, which makes putting rounds on target easy.  The weight of the rifle really cuts down on the shake, and the clean trigger break caps off the experience.

As would be expected, the rifle is topped with Picatinny rail.  Under the barrel, a Serbu bipod allows for easy prone shooting.  The whole package is coated in black QPQ nitride and manganese phosphate.

The Serbu BFG-50A is listed at $6,700.  While that price tag will shock the pants off of some of you, it is not bad for a .50, and substantially less than a comparable Barrett

It isn’t easy to find a place to shoot .50 BMG.  I called ranges all over Virginia and couldn’t find anyone willing to let us shoot it.  Even the long range shooting schools, facilities that are isolated on massive tracts of land in the mountains and woods of the state, all declined.  Some cited the potential for liability.  Other said the noise from the gun would be too much for the neighbors.  Across the board, the answer was no. 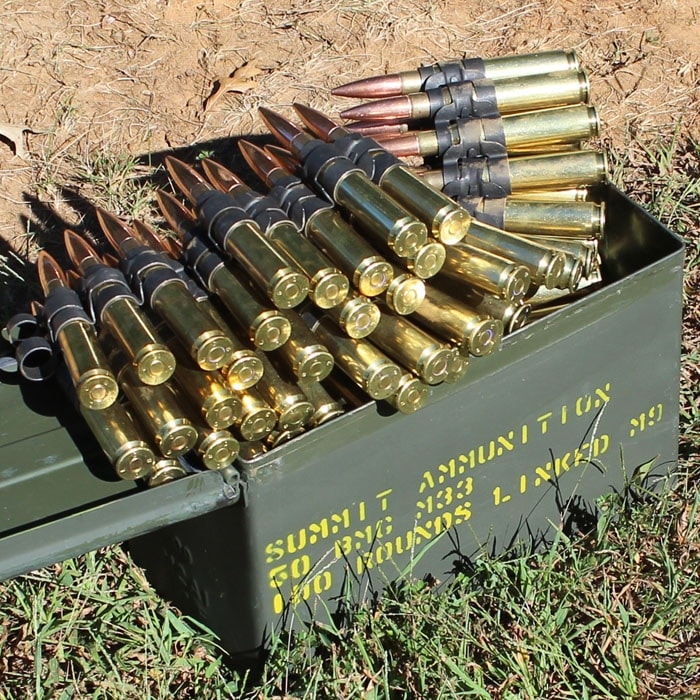 When Serbu gave me an arrival date for the rifle, I went searching in earnest.  After hitting the Virginia Gun Trader’s website and begging for advice, I received an invitation to shoot on a private farm.  The terrain offered plenty of obstacles at the end of open stretches of pasture.  The grade of the land provided even more security.  If there was a random flier, or an accidental discharge, there was little chance it would do unwanted harm.

I have since found more ranges that allow .50s.  Most are large outdoor ranges with serious berms.  The point here is that all of the concerns we typically consider when shooting any gun are amplified with the .50 BMG.  The huge bullet (750 grains) travels incredibly fast (upwards of 2,800 fps), and has the potential to go far (miles?).  That’s the point.

Let’s get past the obvious first.  It is a .50 BMG, so it kicks.  In order to handle the recoil of the round, the rifle has to have some mass.  As such, you have a big rifle that is necessarily weighty.  We tried shooting the gun standing, holding up the weight, and it is possible.  Not terribly practical, but possible.  The recoil isn’t going to knock you down, and the weight won’t prevent you from acquiring your target.  But the BFG-50A is at its best when rested on a table, or on the ground.

The recoil feels like a 12 gauge, honestly.  I’ve felt much harder kicks from smaller polymer framed rifles chambered in .30-06 or .338 Lapua.  They simply don’t have the mass to help mitigate the recoil.  The Serbu is easy by comparison.  After putting down nearly 100 rounds in one session, I had no lingering soreness or bruising on my shoulder.  And there is no muzzle rise.  The gun simply drives back against your shoulder. The bolt on the BFG-50A has a long way to travel. (Photo by David Higginbotham)

But there’s more to consider with a rifle like this.  We’ll get to accuracy in a minute.  Before we get too deep into how the gun shoots, I have to give Serbu credit for their incredible build.  This isn’t a mass-produced rifle.  Each of these guns will bear the marks of being constructed by hand.  The weld lines on some of the steel are simply buffed over and coated.  There’s no real effort made to make this look like something it’s not.

Yet I’ve rarely seen rifles that are as smooth as this one.  In fact, I would say that I’ve seen three guns in the last year that were this well built.  One was a Cabot 1911.  The second is a Fulton Armory M1 Carbine I have in for review now.  The third is this Serbu.  And the place where the quality is most apparent is the action.  The bolt slides back with no hitch.  This is a movement that defies easy description, but I’m going to attempt it.  The bolt snicks back and forward with a consistent, easy pressure.  Considering how far it has to travel, and the recoil it has to manage, this feat is even more remarkable.  Rounds feed with ease.  You can run the bolt from you shoulder, lying prone, while maintaining a sight picture through the scope.  The giant rounds in the heavy magazine slide off and into the chamber without a perceptible change in the bolt’s course.  Yet it requires no effort to pull it back.  I still haven’t figured it out, exactly.

We ran two types of ammo through the gun.  One batch was surplus 647 grain M33 ball.  The other was at the other end of the spectrum: Hornady’s 750 grain A-Max Match.  Both worked reliably well.  The M33 grouped decently and fed well from the BFG’s box magazine.  It was not as accurate as the Hornady, but we had no problem pulling 3 MOA groups from 100 yards, and it shot reasonably close to point of aim. 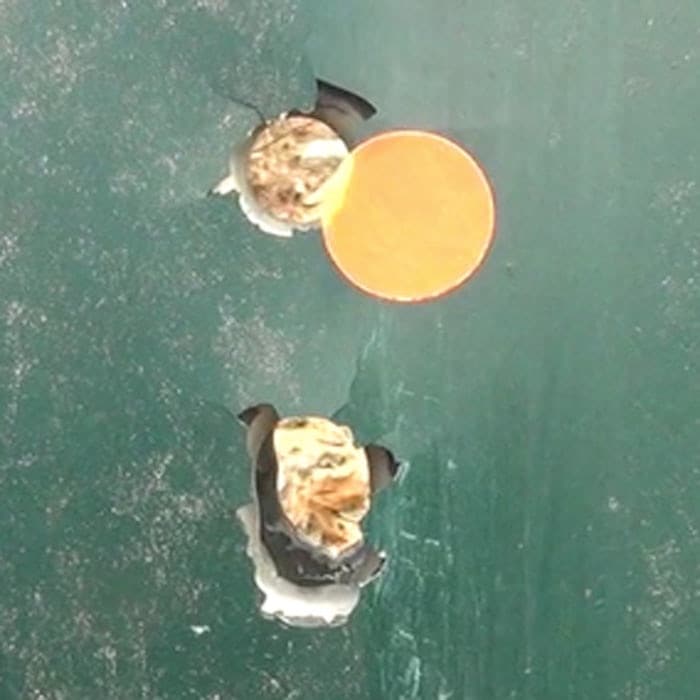 Accuracy? The first shot clipped the dot. The next three went in the same hole. (Photo by David Higginbotham)

But the Serbu’s true potential came out with the match grade ammo.  To illustrate, I’ll give a bit of back story.  We’d traveled with the Serbu in the back of a Subaru more than 100 miles to our first shoot.  We got the rifle sighted in, etc. and drove it back home.  It’s case wouldn’t fit in the back of the Outback, so we had it lying on foam I’d borrowed from another case.  A couple of weeks later, after being wrestled into and out of the safe for various photo shoots, we drove it more than three hours to another range.  After all this manhandling, I thought we’d have to sight in again, but no.  We took aim at a 3/4-inch dot we’d stuck on an old truck hood we were going to sight in on.  From 100 yards out, we clipped the dot with the first shot.

Fluke?  Hell no.  Part of our success with the rifle is due to the dependability of the Nightforce scope Serbu sent on the BFG.  No doubt.  But a scope is only as capable as the rifle under it (and the shooter behind that).  With the Hornady A-Max, the Serbu shot groups under 2 MOA .  That may not seem so impressive to some, but consider that the bullet itself is half an inch wide, and you may have a different perspective.  We had one three round group that came in right at an inch.  One hole.

In short, this rifle out-shoots almost every rifle I’ve shot this year.  Close range accuracy (which I’m calling 100 yards) is beyond reproach.  At longer ranges (we were only able to stretch out to about 600 yards here in Virginia) accuracy is predictably reliable.  The 750-grain bullets have substantial drop as they slow down, but if you can do some basic math, it is easy enough to connect.

Big guns can be demanding.  With some of our reviews, we know that the readers of Guns.com are really looking to our initial impressions for practical knowledge that may inform buying decisions.  We respect that.  I’ve heard directly from some companies that make firearms that our reviews drive sales.  But the Serbu is much more of a niche gun.

Who would buy one of these?  I think there are two logical answers.  The first is, of course, those who need one.  If I were in charge of any sizable law enforcement agency, I’d have a Serbu or two on hand.  It would make a solid addition to any arsenal.  I can see a distinct advantage for military applications, also.  A .50 BMG that weighs in at 23 pounds and shoots this well could clearly be an asset aboard ship, on base, etc.  Think what you could do to some wannabe pirates with this thing!

The handguard and barrel are modular for even more versatility. (Photo by David Higginbotham)

The other market is harder to see, most of the time.  If I had the money for this rifle, I would own it.  No two ways about it.  I even talked with Mark Serbu about the possibility of buying it.  In the end, it is out of my price range.  I simply can’t afford it.  But there are those who can.  Shooters with healthy discretionary spending accounts should check it out.  As for the rest of us, we have to sit on the sidelines and watch.

This is just our first look at this beast.  We’ve put the rounds down range, and shot loads of video, so we’ll have more soon.  Stay tuned.