Connecticut-based Charter Arms has something really useful and different: a line of revolvers chambered in semi-auto calibers. They call the revolver the Pitbull. We recently gave a workout to one chambered in 45 ACP. 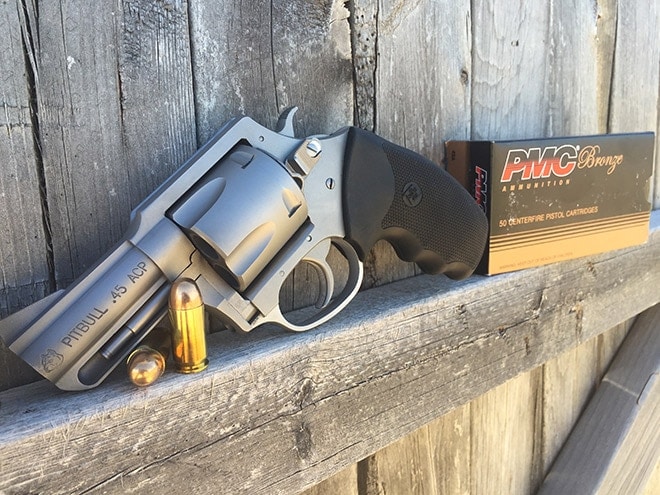 The Pitbull looks like any other single/double action revolver at first glance. The Pitbull is available in three calibers — 9mm, 40, and 45 ACP. It comes in two finishes, brushed stainless and black nitride. The grips are rubberized, black, and feature a subtle company logo. The 2.5-inch barrel is stamped with the usual company, model, and caliber data. There’s also a little pitbull head, which is more subtle than it sounds. In .45, the gun weighs 22 ounces. 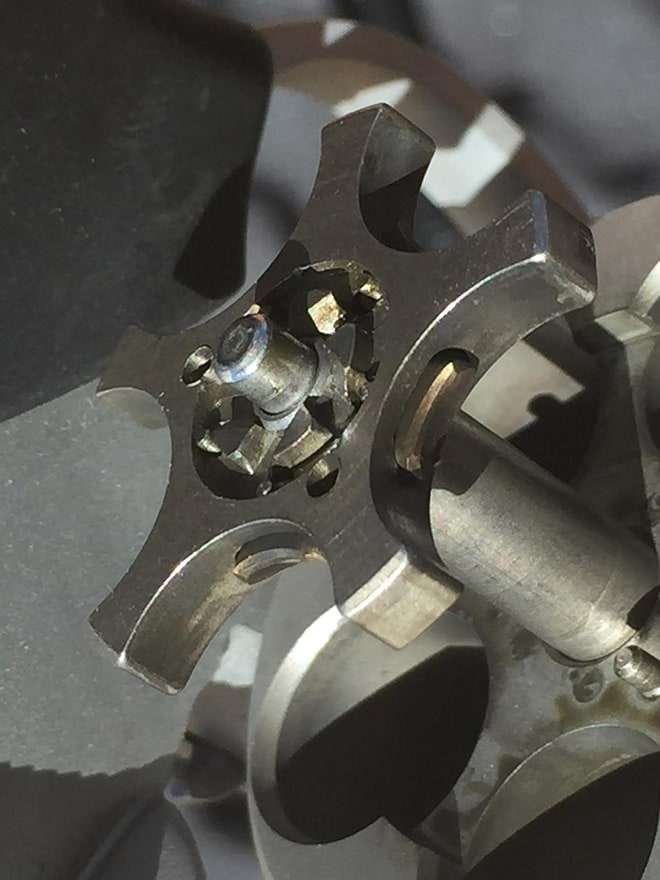 Detail of ejector with tension brackets that act as a moon clip. (Photo: Team HB)

Open the cylinder, and things aren’t so vanilla. The extractor is, by design, a sort of collar with retractable spikes. Spring-loaded clips on the center of each arc protrude ever so slightly. These tiny clips retract on loading, then spring back into place just enough to secure rimless cartridges in place. Its simplicity left me wondering what took someone so long to think of this.

Loading the Pitbull is like loading any other revolver, with the exception that there’s a bit of resistance from the integral rim clip. It’s nothing compared to the chore of loading moon clips, and it’s a much more durable arrangement, too. 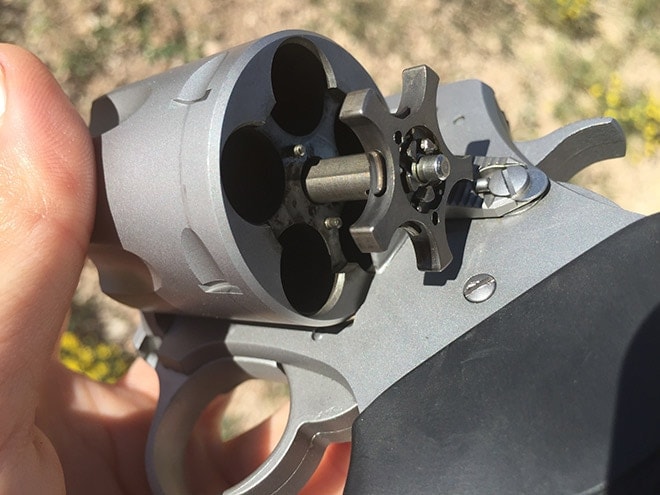 The five-chamber cylinder rotates clockwise. Trigger pull is typical of a revolver, long and heavy, but not more so than the Ruger LCR in .38 I’m accustomed to. (Hey Santa, a trigger pull gauge would fit nicely in my stocking).

Using PMC Bronze ammunition kindly supplied by Lucky Gunner, I shot several sequences in double action only, and a few more in which I mixed double and single action, plus two cylinders in single action only. I did not experience a glitch of any sort. 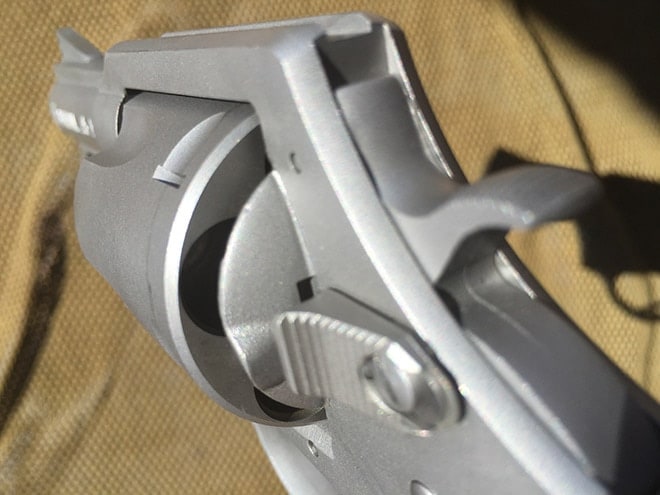 The sights are plain but the silver finish helps visibility. (Photo: Team HB)

Accuracy was good. With concentration I could carve a ragged five-round hole from five yards. Rounds seemed to land ever so slightly high and left, but that may be more an indication of my trigger technique, to be discussed later. If the sights are to blame for the slight off-ness, there’s nothing that can be mechanically done. The sights are integral to the frame.

Speaking of sights, they’re absolutely plain with no engraving or color. Since the finish on the test gun is stainless steel, sights were easy to see on a dark target. Seeing the sights on the black nitride model would be a challenge in some conditions. The front sight is the only place where I can see that custom enhancements might be useful to improve this model. 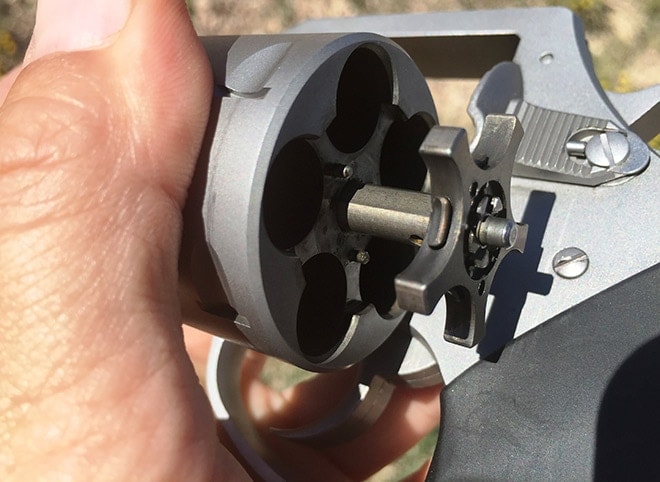 Rounds eject cleanly, even when the cylinder is hot. (Photo: Team HB)

The grip is comfortable for my medium-sized hands. I normally fire revolvers with thumbs anchored on the support side, but for whatever reason, on the Pitbull I found my left (non-firing hand) thumb “wanted” to be behind the gun. It felt more balanced and the gun was better controlled with it there — a real change from my usual Ruger LCR grip. 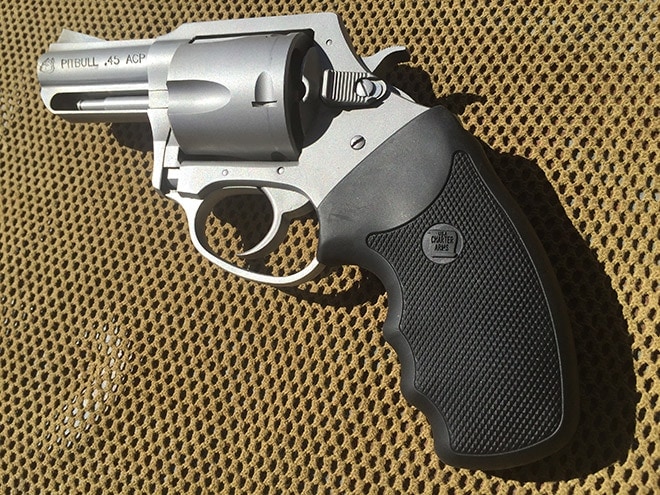 The prominent grip is nice, though I it did force me to change up my usual a grip. (Photo: Team HB)

A 45 that weighs less than two pounds is going to deliver recoil. I found however that the Pitbull is no more obnoxious than any small revolver, and easier to control than a traditional single action 45. After firing about 30 rounds, the base of my firing hand thumb was achy, and both hands were a bit sore later that night. I remain pleasantly surprised it wasn’t more fatiguing to my hands.

I did find myself hooking more finger around the trigger than is technically correct, simply due to the heavy trigger pull. This may also have been the reason for the slight left drift, since that trigger technique puts the strong part of the finger in touch with the side of the frame, where it can exert westward pressure.

The Pitbull is off the chain. But where does it belong?

This revolver could be the pet of those who like 45-caliber revolvers and want something they can take for walks — or to work, or wherever. Its design lends great flexibility to a gun collection. The handling is as gentle as other centerfire models, but the caliber lends a big bite.

It’s also fun to shoot, until hands are worn out and you can’t get in trouble gambling on this one with an MSRP of $489.