An Original Colt 1911: A hundred years old and still living up to the hype

Although Colt originally began producing the 1911 more than 100 years ago, today they are made in droves by multiple manufacturers and in numerous configurations.  It is John Moses Browning’s most recognized and copied creation.

The classic handgun has a following among firearm enthusiasts that is unrivaled.  Even those who are not fans still have respect for the ubiquitous design. While many have their favorites, today praise will be given to an original: a civilian Colt 1911 that was made in 1913.  Although this particular pistol is not a pristine example – it has a few nicks and scratches – it truly embodies the 1911 mythos. 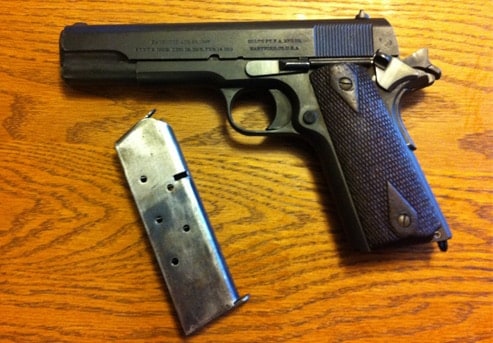 For those who aren’t as familiar with the 1911, it all started in the early 20th century when the US Army was looking for an autoloading pistol in a caliber no smaller than .45. From 1907 to 1911 they had field tests for two designs – one from Colt and one from Savage. 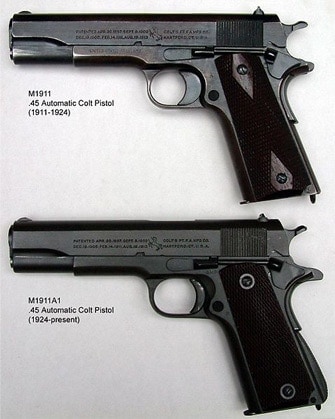 As the story goes the Colt proved its dominance in the final round of testing when officials fired 6,000 rounds in a two-day period. During the test whenever the Colt got hot the shooter would simply dunk it into a bucket of water and then continue shooting. Despite the extreme treatment, it completed the test with zero reported failures. Colt won and was adopted in 1911, hence its name.

The M1911, the US military version, was really only updated once in its service history.  That was in late 1923 and the models built with the changes were designated the M1911A1. These improvements didn’t happen overnight, some pistols have a mix of the changes that were mostly external.  However, the internals are interchangeable between the two.

The quickest way to tell the difference between the two is rear of the trigger.  The 1911A1 has cutaways on the frame behind the trigger (the vast majority of clones and copies have these cutouts).  The other main differences are arched main spring housing, different grip design, shorter trigger and the extended tang on the grip safety on the 1911A1, which was added to prevent hammer bite.

The 1911 under scrutiny is a 99-year old civilian model (specified with a “C” in front of the serial number), that did, in fact, see military service…

In the Argentina Navy

In the early 20th century, Argentina commissioned two battleships to be made by the Fore River Shipbuilding Company in Massachusetts.  When these were completed they also bought small arms to outfit the ship’s arms lockers. These were stamped MARINA ARGINTINA and in the case of the 1911s, it was on the slide.

Although the barrel, slide and frame all show the original Argentinean inspector’s marks from 1914, this particular model was refinished at some point in its service life.  It was originally blued but has been parkerized.  Like most military service arms, this example has also been rebuilt a few times. It isn’t perfect, but it loves to be shot.

This Argentinian Colt 1911 is a pure joy to shoot.  I have fired about 500 rounds through this old warhorse and it hasn’t failed once, which I think really speaks for the design and manufacturing because, as I mentioned earlier, it is 99 years old.

The 1911, as opposed to the 1911A1, is more suitable for those with small hands – a category I’d fall under. The arched main spring housing makes the A1 a little too big to be comfortable in my hand.

The point of aim is dead on.  The sights are smaller than on most modern pistols and can take some getting used to, but with a little practice I have been able to get some very respectable results. 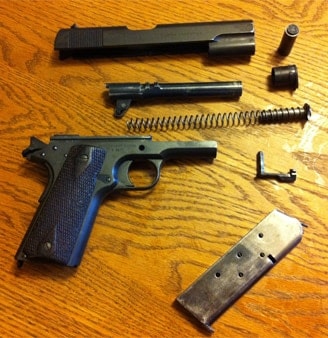 However, in some areas the design does show its age. Due to the size, the sights are not great for rapid fire as it can be difficult to obtain correct sight picture.  Also, it was designed to shoot ball ammo, meaning it does not like hollow points that much.

These early 1911s certainly offer a different experience than ones offered today. Other than finding an original M1911, which can be found in a wide-range of prices, your best bet is to aim for one of the reproductions Colt made a few years ago. Even though they are not currently in production, they can be found.

The original 1911s are highly valued and collected – especially those with WWI and WWII connections – but you don’t have to break the bank to get the experience.

While writing this article I came across a new 1911 reproduction from Cimarron Arms.  I have not had the chance to check one of these out yet.  But if it is in line with the quality of Cimarron’s Cowboy Action arms, it should be a nice gun.