Some things are just meant to be together: peanut butter and jelly, milk and cookies, and a caliber-matched lever-gun and revolver.  While most of those chambering-partners have only been available in 45 Long Colt, .357 Magnum, or .44 Magnum, there’s a new sheriff in town.  With the addition of the .41 Magnum chambering to its Big Boy Steel lineup, Henry is dusting off many a nostalgic shooter’s favorite and, paired with a S&W or Ruger revolver, this new lever gun is an under-the-radar pleaser. 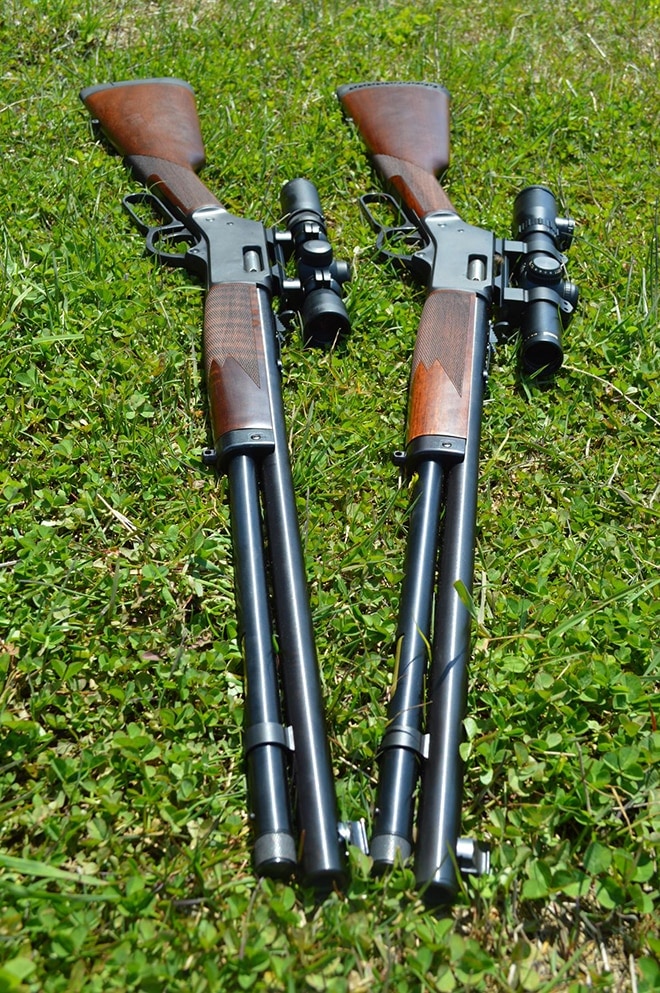 The Steel model addition to Henry’s venerable Big Boy lineup is not entirely new. In fact, the Steel line of lever guns were introduced in 2015 as the more utilitarian, hard-working counterpart to the softer, albeit flashier brass-alloy Golden Big Boy.  What is of great note, however, is the new chambering in .41 Magnum.

Like all of their centerfires, Henry Big Boys are built right here in the midwest in Rice Lake, Wisconsin.  If you want to get into the details on the Big Boy Steel specifics, check out my earlier review here.

As far as we can tell, the Big Boy Steel Carbine and Rifle are the only .41 Magnum long-guns in current production, as Marlin’s 1894 is no longer catalogued.  Though .41 caliber self- contained cartridges have been around since the mid-1800’s, many shooters are not familiar with the round’s performance or origin. 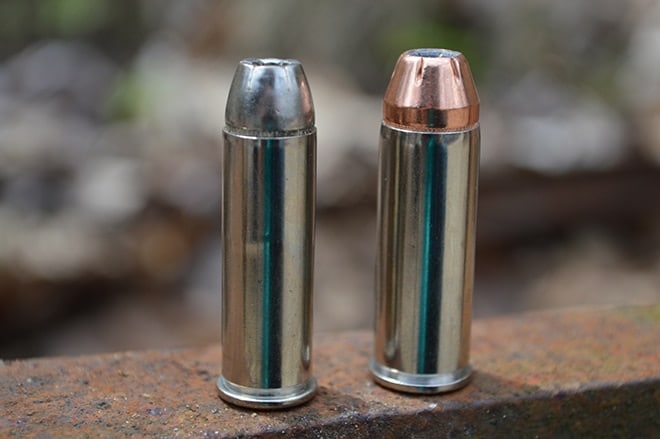 Though the .41 Magnum never realized its full potential after first being pitched as a police caliber with improved stopping power, it has long had a grassroots following in the United States.  Though many still discount the caliber due almost solely to its lack of publicity, as of late, there has been a great resurgence driven by quality wheelguns from both Smith & Wesson and Ruger.  With the hot new accompaniment of the Henry Big Boy Steel, the .41 Magnum is more alive than ever. 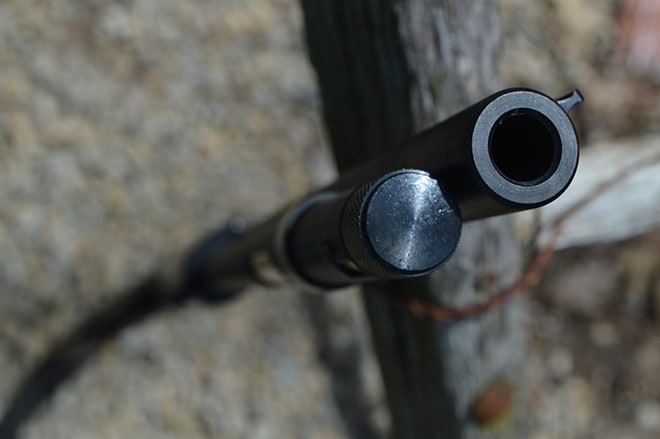 Selections of ammunition have been growing as well, and while the ammo is certainly not as readily available as .45 Colt or .357, it is nonetheless much more common than it was just ten years ago, and just as easy to reload.  Popular bullet weights for the chambering range from 175 to 265 grains, more than capable of stopping large game at varying ranges. 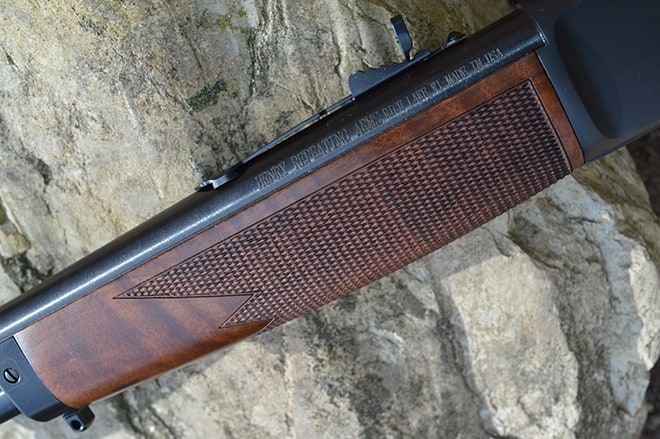 When researching .41 Magnum ammunition, bear in mind that almost all the velocities and trajectories are measured with handguns. Shooting the same ammunition from a 20” rifle barrel can boost those numbers somewhere in the range of 200-300 fps, or even more, in addition to extending the accurate hunting range significantly.  That’s a substantial gain in energy and effective potential downrange for hunters, especially for those in states now allowing the use of straight-walled cartridges for hunting in shotgun-only or traditional seasons. 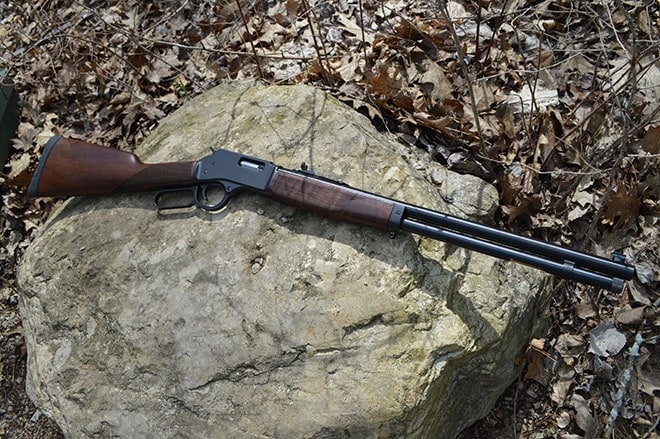 Henry’s new .41 Magnum Big Boy Steel was announced in March of 2016 and is hitting the shelves now in mid-summer.  Henry is currently producing two .41 Mag lever guns in the Steel line, the carbine and the rifle length.  The rifle wears a 20” barrel and standard lever, while the carbine barrel is 16.5” and is set apart in looks and function with the larger loop lever.  Our test rifle wears a solid black rubber butt pad, which is really the only noticeable difference from the .45 Colt Steel version, which has a ventilated rubber pad.  Both the rifle and carbine retail for $850, with real world prices closer to $675. 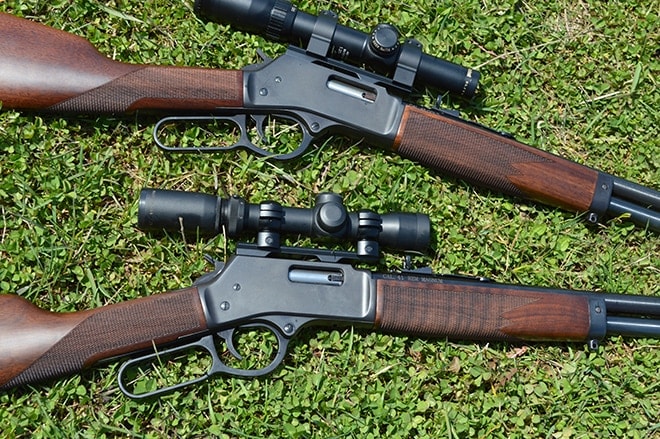 As with all the Steel Big Boys, the .41 Mag comes drilled and tapped for an optic.  Henry’s scope base fits all the Big Boy rifles and is readily available for $27.50 on the website.  Though the iron sights are certainly capable, I intend to do some serious hunting with this baby, so we mounted a low-variable power Burris optic and headed to the bench. 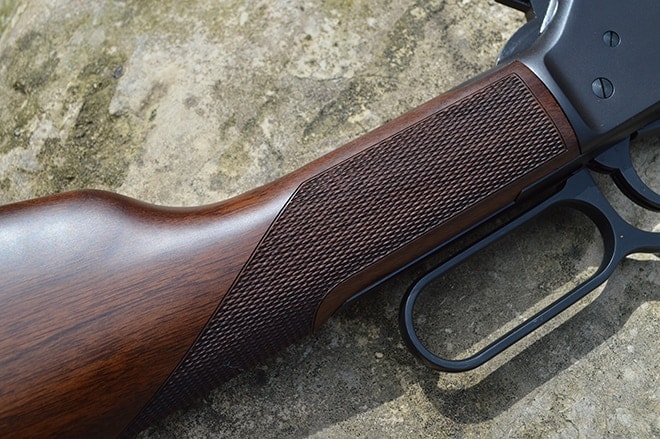 The rifle’s seven-pound weight quite completely negates the .41 Magnum’s already-manageable recoil and makes this straight-wall cartridge a pleasure to shoot for even the most diminutive or recoil-sensitive shooters.  We cycled ammo from Winchester, Federal, and Remington through the ten-round tube magazine with perfect efficiency. 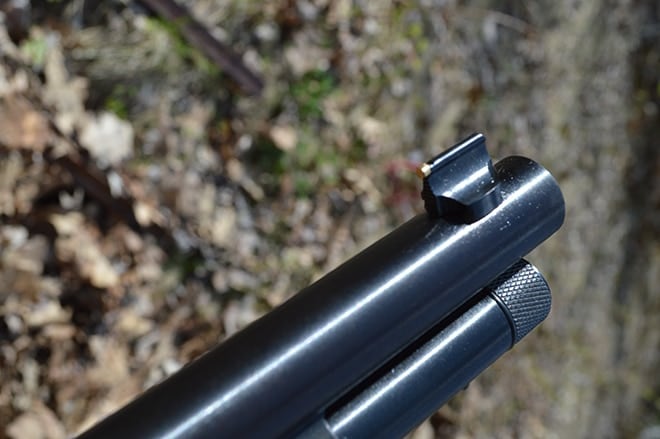 The adjustable Marbles semi-buckhorn rear sight with white diamond inserts and brass bead front sight make for quick and ideal close-quarters hunting and game acquisition.  However, with our Burris optic in place, we were able to better test the accuracy and potential of the flagship chambering. The best 5-shot group came with Winchester Platinum Tip 240 grain at 1.75” from 100 yards.  All that’s left is for Hornady to introduce a .41 Magnum LeverRevolution round. 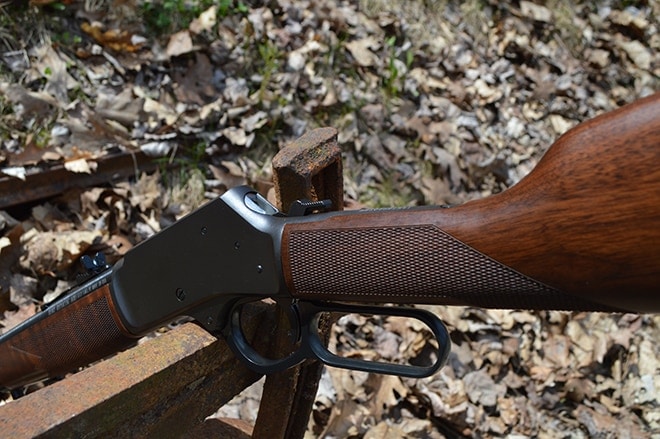 A finish built for hard use. (Photo: Kristin Alberts)

Much like the triggers on other Henry leverguns we tested, the .41 Magnum Steel’s trigger broke right around 4 pounds on the Lyman gauge, without creep or grit.  The only thing gritty about the gun is its utilitarian appearance.  Even that, however, is enhanced by the above-average American walnut stocks grain pattern and clean steel-to-wood fit-and-finish.  The gun shoulders easily, is well balanced, and quick to maneuver on target.  The Big Boy Steel will be a ready and capable hunting companion in the dense forests this fall, with my S&W 57 Classic ready in its shoulder rig for close-quarters game. 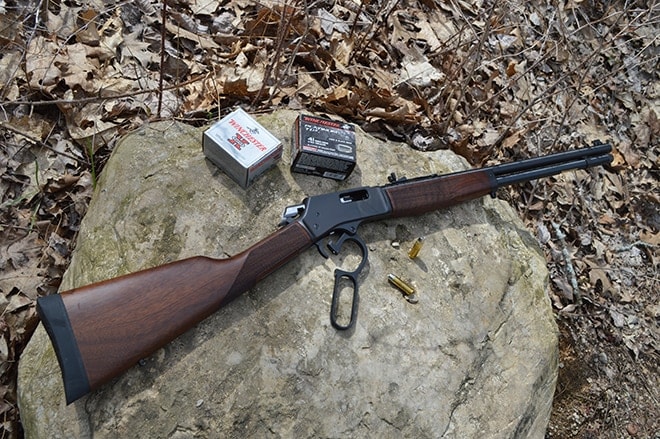 Closet-lovers of the .41 Magnum will have plenty to fancy with Henry’s latest addition to the Big Boy Steel lineup.  The lever guns in both Carbine and Rifle length are backed with the longstanding reliability and quality of the Henry brand.  A low-recoiling, hard-charging .41 Magnum Made in America Big Boy Steel is on the range and ready to be partnered with your favorite .41 Mag revolver.