Honor Defense’s Honor Guard pistol has taken the single-stack semi-auto world by storm. Introduced in 2015, the Honor Guard initially flew under the radar before amassing glowing reviews for its reliability and functionality.

Guns.com previously checked out Honor Defense’s sub-compact Honor Guard, but the company has since launched a new variant on the design – the Long Slide. The newer version utilizes the same chassis as the first Honor Guard but kicks the design up a notch with a few more appealing attributes.

New vs old: What’s the difference? 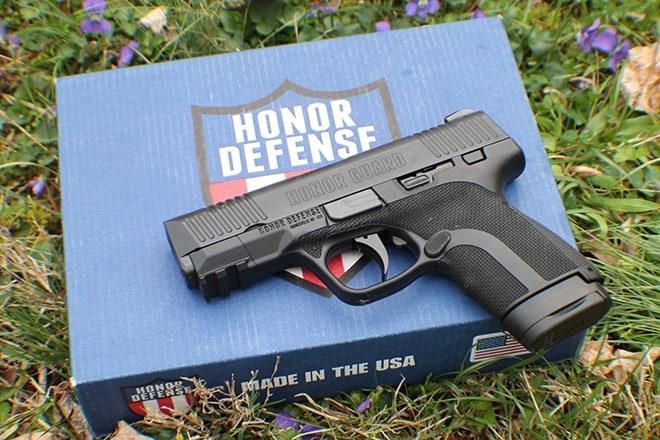 Honor Defense is back with a longer version of their sub-compact Honor Guard called the Long Slide model. (Photo: Jacki Billings)

Chambered in 9mm the Long Slide model is, you guessed it, longer than the sub-compact. The new version features a 6.8-inch overall length compared to the sub-compact 6.2-inches. Additionally, the LS version boasts a 3.8-inch barrel while the sub-compact sports a mere 3.2-inches of barrel length. A slight weight difference of only three ounces, the LS is slightly heavier weighing in at 25 ounces. 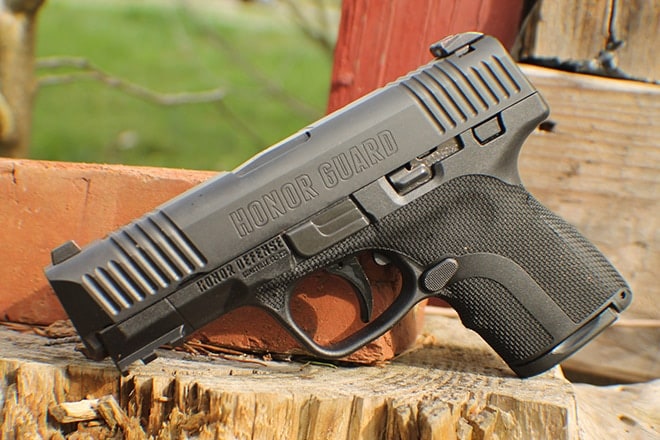 The Long Slide is built on the same chassis as the original Honor Guard, above, but boasts additional features. (Photo: Jacki Billings)

Trigger pull is the same for both guns, set at around 7-pounds. Small and large backstraps accompany the Long Slide, allowing users to find a better fit. Since my hands err on the side of petite, I chose to equip the Long Slide with the smaller backstrap. The new version features the same stippling as the original sub-compact, which is a win in my book. Honor Defense has done an excellent job offering a stippled grip with another texture to hold onto, but without it being too aggressive that it leaves abrasions. 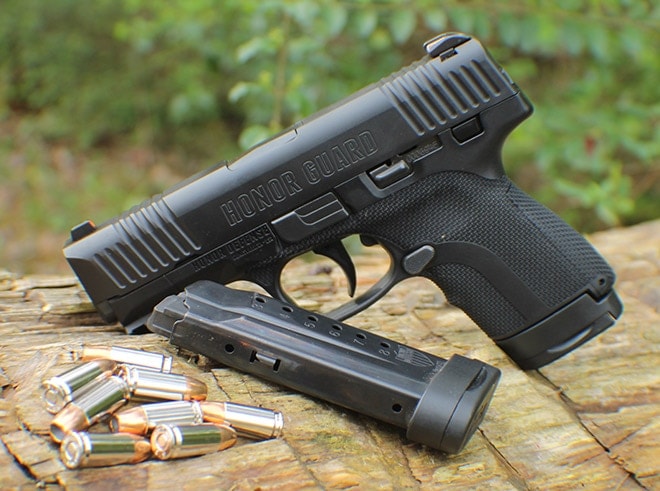 The pistol comes with two magazines – a flush 7 round and an extended 8 round. (Photo: Jacki Billings)

The Long Slide version also benefits from the addition of an accessory rail. Though it’s not a full length rail, it offers enough room for a small light or laser add-on. Southpaws will appreciate the gun’s ambidextrous attributes, offering an ambi-mag release and optional ambi-thumb safety.

Long Slide range test: How it does in the wild

Having previously tested the sub-compact version, I was curious to see how the Long Slide would stack up against its predecessor. After inserting the flush magazine into the mag well, I expended seven rounds of Sig Sauer V-Crown into the steel targets down range. The gun performed excellently, feeding the ammo properly and with no obvious issues. I then moved on to some grittier brass ammo to examine if the Long Slide could handle dirtier loads. Sure enough, the pistol perfectly popped off the rounds in succession. 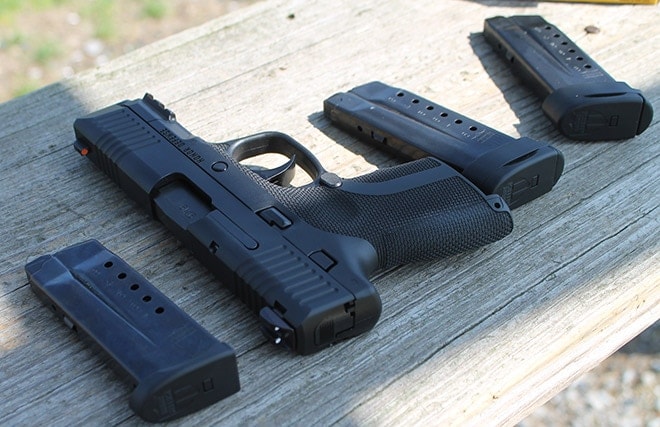 Out on the range the Long Slide version performed as well as the sub-compact once a minor mag hiccup was corrected. (Photo: Jacki Billings)

I moved on to the Long Slide’s included extended magazine. Housing eight rounds, the extended offers a little more grip real estate for those with meatier paws. Inserting the magazine, I loaded the pistol and shot two rounds before experiencing a failure to feed. I cleared the malfunction then set back out to shooting. Two rounds then another failure. The pattern continued even after I swapped ammunition. 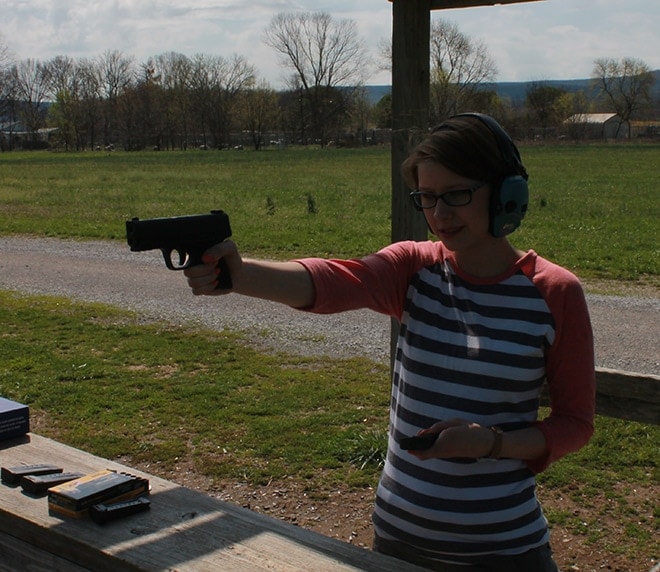 I examined the magazine and noted that it looked worn – not surprising with tester guns as reviewers typically cycle through the exact same firearms. I contacted Honor Defense’s President Gary Ramey to see if we could swap out what I suspected was a rogue magazine.

The team at Honor Defense had two new extended magazines at my door within days. I immediately ran off to the range to see if my suspicions of a bad mag were correct. Indeed, they were as both the new magazines sent three boxes worth of ammo down range flawlessly. 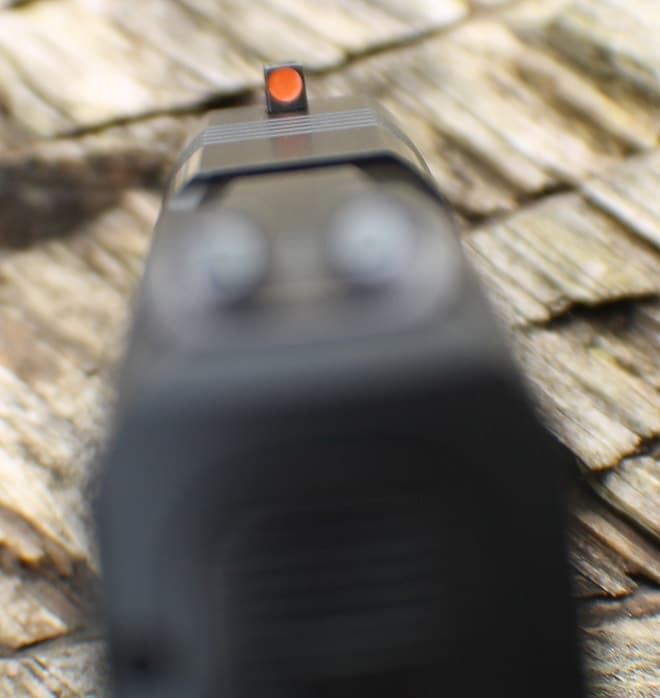 With the minor mag hiccup resolved, the Long Slide handled the rest of my tests like a pro. I’m notoriously tough on my test guns, not shying away from tossing them onto the ground and roughing them up. The Honor Guard didn’t seem phased. Round after round zipped from the barrel down range to the steel targets culminating in a satisfying ding every time.

The large, orange front sight and rear white dot sights are especially helpful on the range when targeting smaller targets. The brightly colored front sight is especially useful as it grabs the eye, helping draw the focus to the front. 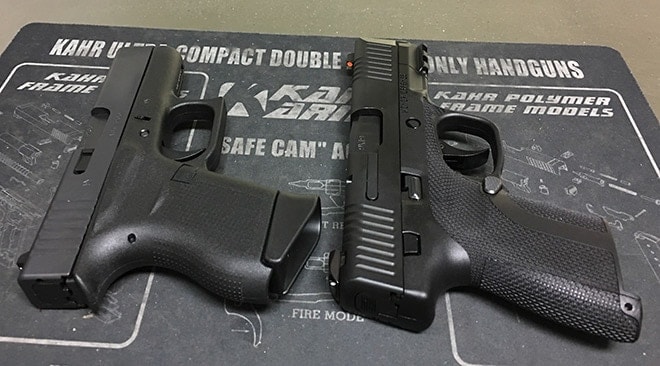 A comparison in size with the Glock 43, left, and the Honor Guard Long Slide, right. (Photo: Jacki Billings)

Though the colored sight is a nice touch, what the Honor Guard does best is strike that delicate balance between weight and recoil. It’s heavy enough that it doesn’t experience the same muzzle flip like the Ruger LC9s or Glock 43, yet it’s not too heavy to cause swift muscle fatigue. The longer frame also helps mitigate recoil and makes one-handed shooting more comfortable. 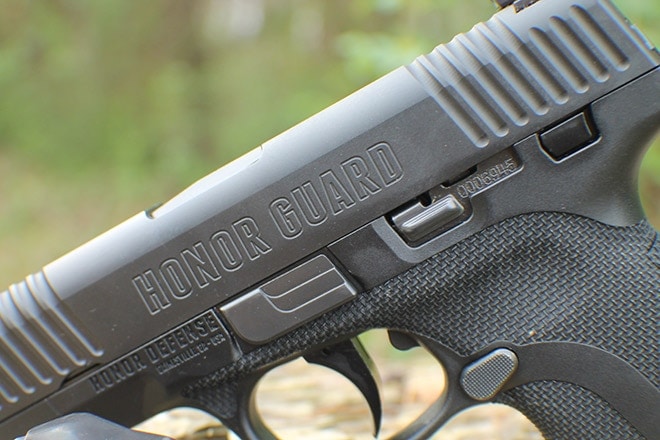 The take-down mechanism is easy to manipulate and take-down does not require the pull of the trigger. (Photo: Jacki Billings)

Take-down can be an anxiety inducing process, especially when you consider that some firearms require the trigger engagement before the slide can separate from the frame. While gun owners should always adhere to basic safety principles, accidents have been known to happen. Honor Defense aims to take the risk out of cleaning by removing the need to pull the trigger at all.

In order to take the gun apart, users lock the slide to the rear, rotate the take-down mechanism and then slowly ride the slide forward. At that point, the slide moves smoothly off the rails and shooters may commence cleaning. 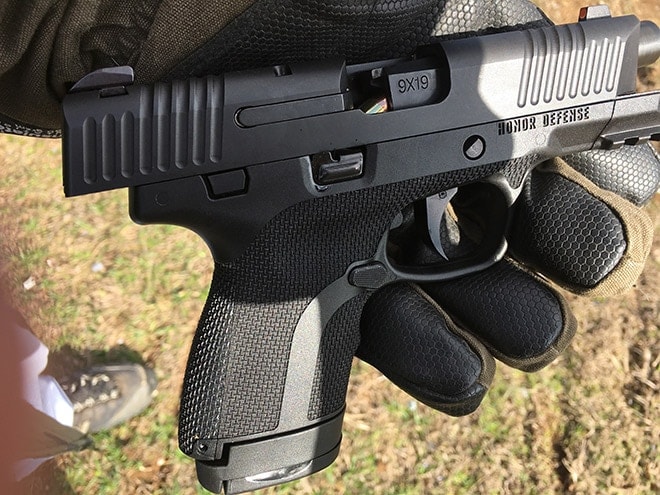 The problematic magazine caused every few rounds to get caught on the feed ramp inducing a malfunction. The problem was solved with a swap-out to new mags. (Photo: Jacki Billings)

When cleaning is complete, simply reverse the take-down steps by sliding the slide back onto the rails, locking it to the rear and then flipping the take down switch back into place.

Though it seems a simple feature, the benefits of the Honor Guard’s take-down can’t be ignored. Providing a safer means of take-down while reducing the steps means more time for cleaning and less opportunity for an accidental discharge.

That being said, despite the added safety feature, gun owners would be prudent to remember the safety tenants and adhere to them. 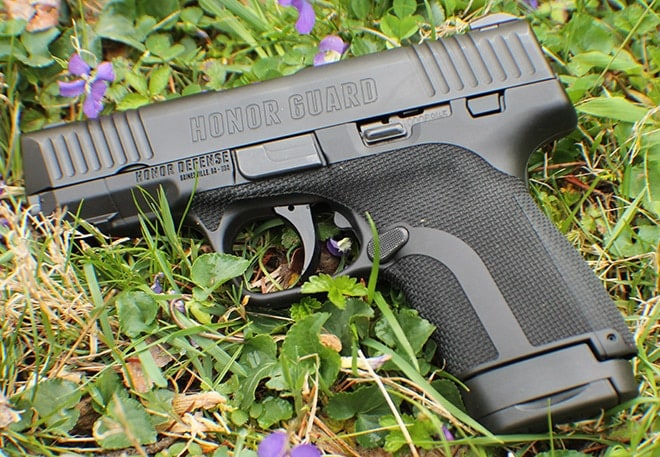 The team at Honor Defense is comprised of industry experts who have put in their time at major companies like Remington and Beretta. This expertise serves them well as the latest iteration of the Honor Guard is just as fabulous as the original.

Meshing the previous sub-compact’s safety, efficiency and reliability into a longer package, the Honor Guard Long Slide is a winner in my book. The Honor Guard’s MSRP is $499, but the pistol can be found out the wild for around the $450 mark.