As an offering to the expanding novel market for mini-pump action shotguns that aren’t, Remington’s Tac-14 is a solid and shootable offering that has some niche uses and a broad appeal.

Going back to the old Remington 870 “Witsec” specials designed for U.S. Marshals, shorty shotties have filled a niche role for years but fell under National Firearms Act regulations as Short Barreled Shotguns or Any Other Weapons — the latter as in the case of the Serbu Super Shorty.

Then, a couple of years ago, Black Aces Tactical introduced a series of 12 gauges “firearms” that were not legally shotguns and, though their barrels fell well below the 16-inch benchmark for shotties, since they remained over 26-inches long, allowed buyers to pick one up without the nearly year-long wait and stamps required for SBSs and AOWs. Big name shotgun maker Mossberg caught on to this concept last year with their Shockwave firearm, and Remington jumped aboard with both feet this Spring with the Tac-14.

What keeps the gun out of shotgun territory is that they are constructed with a “virgin receiver” in other words, one that has never been mated to a stock. For reference, Remington machines their 870 receivers from a single block of solid steel in their historic Ilion, New York plant, whereas the Mossberg is aluminum, so there’s that.

The Shockwave Raptor bird’s head pistol grip, according to the literature on the accessory, is specifically shaped to minimize felt recoil. Notably, at 5.5-inches overall length, it goes a tad longer than the standard 90-degree pistol grips commonly seen on PGO shotguns for the past few decades, which is important enough that you can add a 14-inch barrel and remain just over the 26-inches needed to stay out of the hot soup that is NFA regulations on AOWs.

With that being said, if you replace the Raptor grip with a shorter pistol grip, your Tac-14 (or Mossberg Shockwave for that matter) is going to dip below 26-inches, so be sure not to do that without an approved Form 4 and $5 tax stamp. Likewise, putting the 14-inch cylinder bore barrel of your Tac-14 on a standard shotgun without a stamp is also a no-no. Best bet is to keep your Tac-14 in factory specs when it comes to barrel and pistol grip.

The Magpul MOE polymer forend with 10 M-LOK slots just screams out for a vertical foregrip. Curious about the legality of such, we consulted firearms attorney Adam Kraut, who explained that “since it is not a pistol, putting a VFG on it would not turn it into an AOW, whereas, if it were a pistol, a VFG would make it such,” which is a lot of alphabet soup but boils down to, yes, you can slap a grip on the Tac-14 without the ATF screeching in the distance.

Besides the addition of a grip or stop, the slots oriented at 3′, 6′ and 9′ o’clock allow for the obvious use of lasers and lights — a big win over the traditional M500-style corn cob of the Mossberg Shockwave. One downside is that for those with small hands, it may be a challenge to get their fingers too close around the grip almost entirely as it is very blocky — which may be a reason why Mossberg screws a nylon strap across the bottom of their narrower grip. Of course, for those looking to experiment, I image most 870 pump grips will work, and Shockwave sells a strap kit as well.

When it comes to magazine capacity, the short under barrel tube on the Remington accommodates 2.75- and 3-inch shells with a capacity of 4+1 and 3+1, respectively, which is one shell less than the Mossy. A dimpled mag tube slows down the prospect of adding an extension but doesn’t rule it out. We tried running some 1.75-inch Aguila Minishells through the Tac-14 and could stuff seven down the pipe, but they did not feed properly, which is a common problem with 870 platforms and the diminutive niche shell. 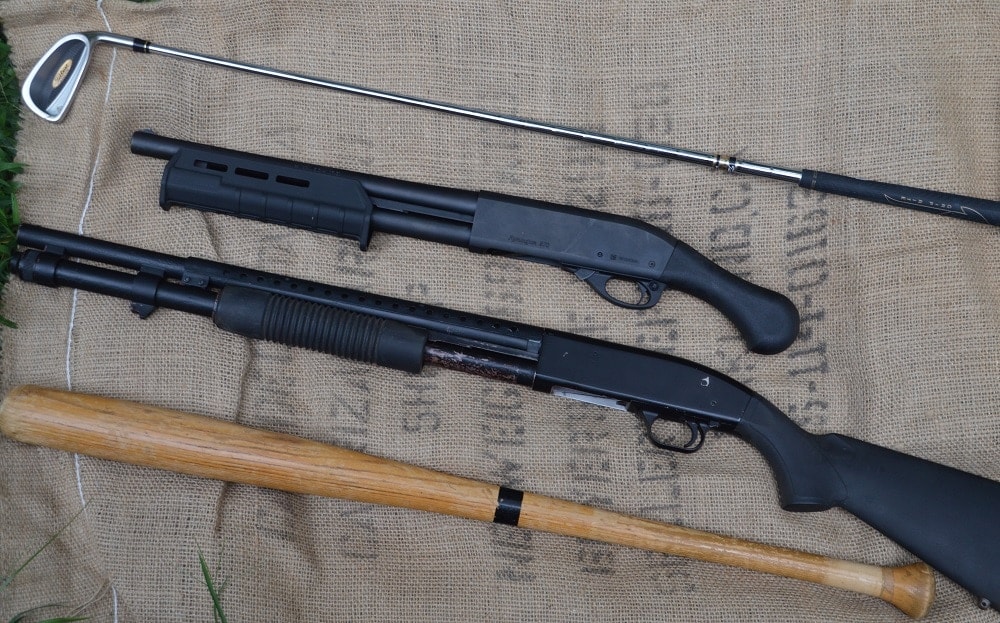 Remington bills the Tac-14 as “The shortest allowable distance between powerless and prepared,” and when compared to many other common home defense articles larger than a handgun, there is a bit of truth to the statement.

The weight of the Tac-14 is 5.5-pounds unloaded, much more than your average handgun and a few ounces more than the Mossberg Shockwave, but still less chunky than a full-sized shotgun of any breed. With the resulting lighter weight and lack of a buttstock, you would expect this “whippit”-style firearm to have a very stout recoil, after all, it is a shotgun in all but legal name. 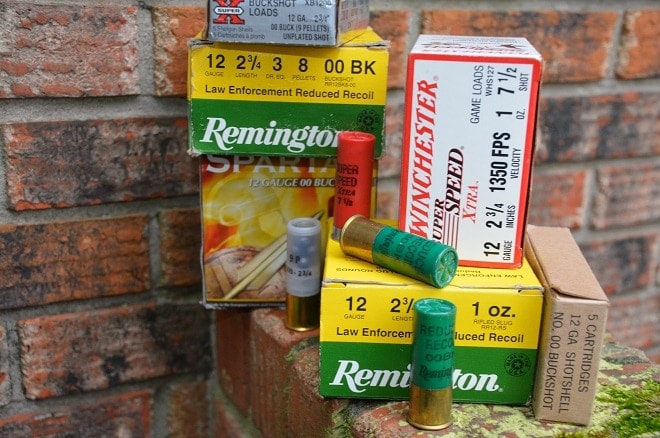 We ran a mix of low-brass birdshot, high-brass field loads, hunting buckshot, and both military and LE slugs and buck through the Tac-14

We tried the Tac-14 with a wide variety of shells including low-brass birdshot, high-brass field loads, hunting buckshot, and both military and LE slugs and buck to get a good feel for how she handles.

In short, the hype on the Shockwave grip is well deserved and, while not outright pleasant to shoot, the recoil of the Tac-14 was manageable with most loads and didn’t leave you feeling like you wrestled a bear at the end of the day.

The most “bite” came from heavy field loads, which is logical, and in some instances, we found that, with the gun pushed into an exaggerated forward stance, the barrel would jump out of the support hand with such loads — making a case for a strap or VFG on the pump.

Adjusting the grip and easing back slightly on the stance greatly improved the handling without sacrificing accuracy — and you can hit just about anything you want at a moderate distance, but more on that later. Standard velocity as well as reduced recoil 2.75-inch LE rounds — we tried two from Remington — were no problem. Full power 3-inch magnums, however, are no joke.

In all, we put about 1,000 shells through the Tac-14 in about a dozen loads and, with a good solid stance, it worked like a charm, though we did note a few instances of the gun failing to extract all the way.

Speaking of stances, the most comfortable was the “Hollywood” style fallback of shooting from the hip, which is fun for fooling around at the dump shooting condemned appliances or in a very close quarters encounter, but the best for achieving any accuracy at distance came from the same forward-oriented grip used for other PGO shotguns and rifle caliber pistols without a brace as it allows the user to “work the bead.”

One-handed shooting is possible, especially if using a reduced recoil load, which is nice if you are ever in an FBI Miami shootout scenario where you must work a shotgun with one paw out of service. We did find when doing so that the recoil impulse cycled the action in almost every occasion — which is something to take note of should you ever need to go modo de una mano. For those who would like to go lighter, Remington also offers the Tac-14 in 20 gauge.

Accuracy, with a 14-inch cylinder bore barrel, no rear sight, and no stock, is a relative term. With that said, it is not impossible and is certainly acceptable in close areas. We found that at 10 yards we could consistently place all 24 pellets from three shells of 12 ga LE RR 00 buck into the center mass of a silhouette target in a cumulative pattern that spread 9×6-inches, disregarding the wads. 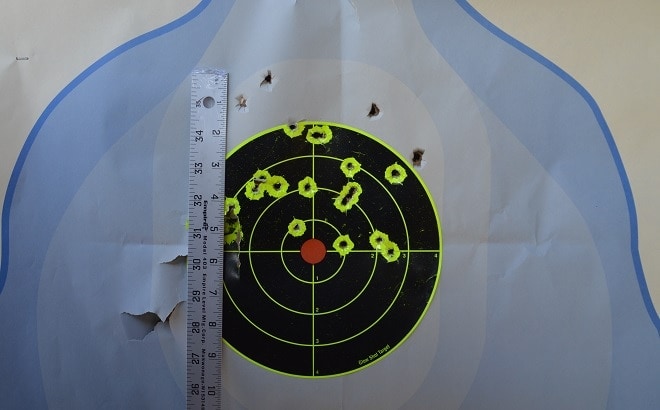 While you aren’t going to take the Tac-14 into the clays stand, we did find the gun reliably accurate at 10 yards. The above are three rounds of 00 8-pellet Remington buck

Moving out to 15 brought comparable results. In a totally non-scientific pumpkin sniper test, at 20 yards we could pick out the center of three gourds and remove it from the equation with milsurp 00 without landing pellets on the two to either side.

Ergonomics are good with the Tac-14, especially when it comes to manipulating the safety and pump release when compared to the Mossberg as the above-receiver safety on the 500-series can be awkward to actuate. This, of course, is subject to interpretation as those more familiar with the 870 will find the Tac-14 easy to pick up while Mossy diehards will have a different file of muscle memory. The trigger guard assembly plate is plastic. 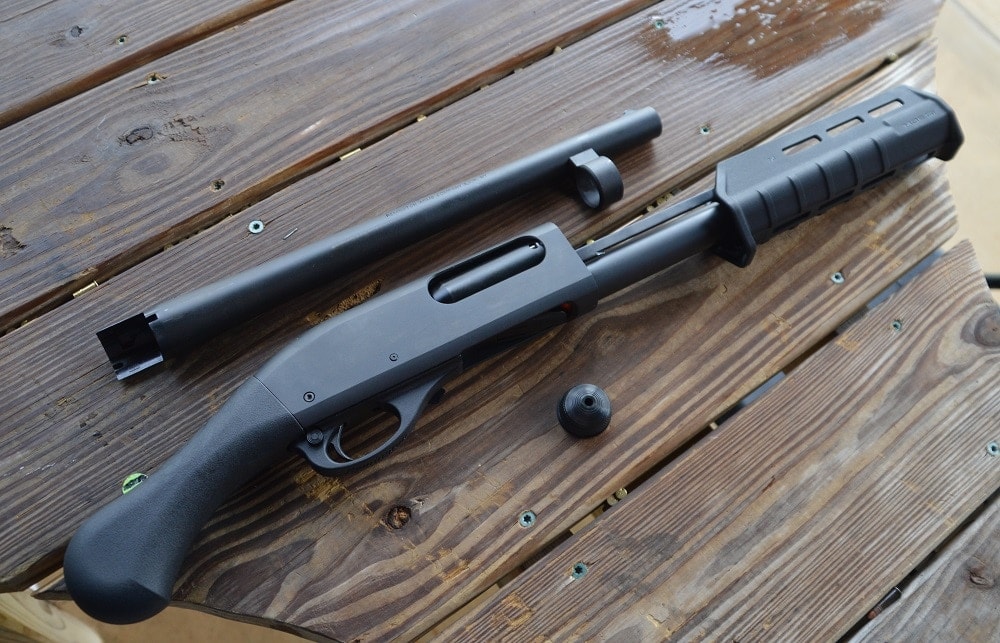 Disassembly is easy and works just like any other 870.

What good is the gun?

Well, it does have a legitimate home defense applicability or use as a truck, cabin, camp or boat gun (especially in its Marine model) with the caveat that you are not going to be able to reach way out and touch something at extended ranges.

Hunting and skeet shooting? Probably not unless a deer walks up to your tent, or your buddy is hand-throwing some clays low and slow. This is more of a duck-and-cover gun than a duck gun.

Range toy with a lot of potential for good clean fun? Tactical police use as a “master-key” door opener? Absolutely.

MSRP is $443, but with rebates and local sales we’ve seen this price much lower and, while some states reportedly may still have heartburn on these mini-pumps, they are available in most. 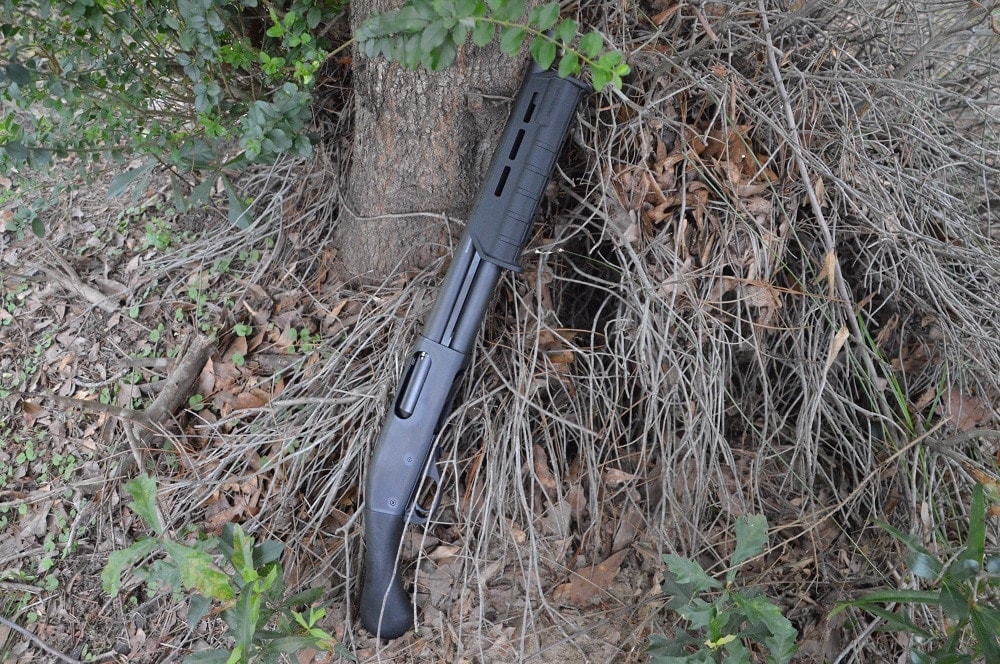