Sig Sauer stepped out of the box with an updated design of the venerable 1911. Dreamy, but does it work? In this test, shooting the Nightmare was akin to a good night’s sleep marred by two interruptions of barking dogs.

The Fastback Nightmare 1911, chambered in .45 ACP or .357 Sig, is available with a five-inch barrel, as well as the “carry” model with a 4.2-inch barrel.  Aside from barrel length, the two are identical.  The copy in this test was a .45 ACP carry model. 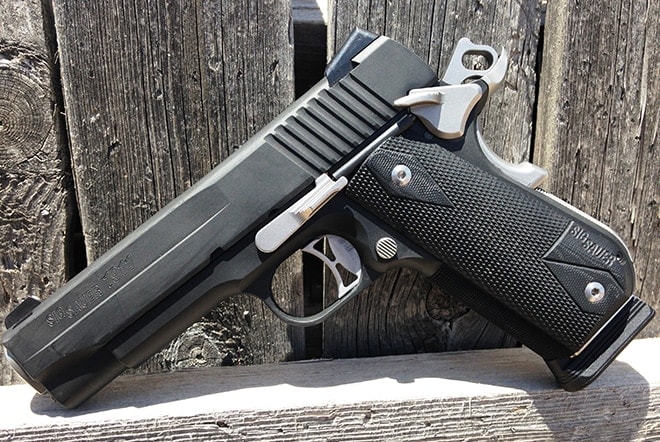 Sig kept a classic 1911 design inasmuch as the gun has no accessory rail.  This missing convenience is offset by the inclusion of a three-dot night sight system. The sights are low-profile and don’t interfere with racking the slide. The tritium inserts work well.

As on a Ford Mustang, “fastback” describes a rounded rear profile. Specifically, the posterior of the grip is tapered.  While this alteration of the traditional 1911 profile is certainly different in appearance, on the range it makes no perceptible difference in drawing or firing.  For those who are motivated to carry this fairly large (7.7 inches long; 38.8 ounces) gun concealed, its rounded butt would probably enhance concealment, but not ease of drawing. 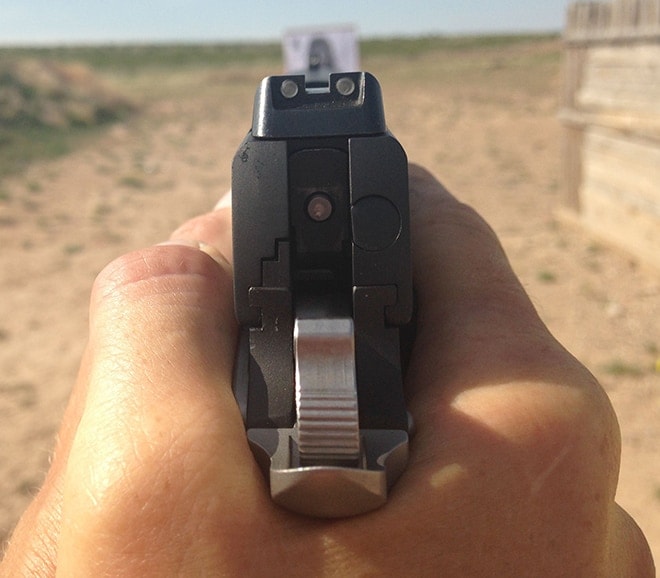 There’s a lot done right with this pistol and the Nightmare upholds the tradition of accuracy associated with the 1911.  Out of the box, it easily rang 8×20-inch steel at 50 yards with a dead-on hold using a two-handed, standing position.  The grip safety is on the long side, with a protrusion set in the palm, a design that prevents accidental disengagement of the grip safety during firing. Shooters whose hands resemble a slice of bread more than a hamburger will appreciate this feature.  The diamond-pattern rubberized grip panels and checkered front strap provide good purchase even for sweaty hands and extended firing. 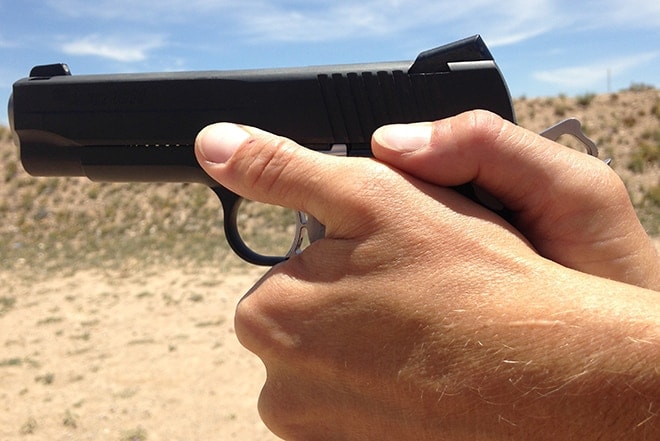 Aiming Sig Sauer Nightmare with thumb over safety – these pistols are not ambidextrous. (Photo: Team HB)

The takedown procedure is typical for the platform, and somewhat easier, at least for the carry model. Upon un-boxing, it was disappointing to not find a bushing wrench.  But disassembly was relatively easy without one. The barrel is apparently chrome-lined, with a mirror finish that oozes quality.

The Nightmare has no peep-hole or other loaded chamber indicator, nor is it ambidextrous.  For readers to whom these things are important, now you know. 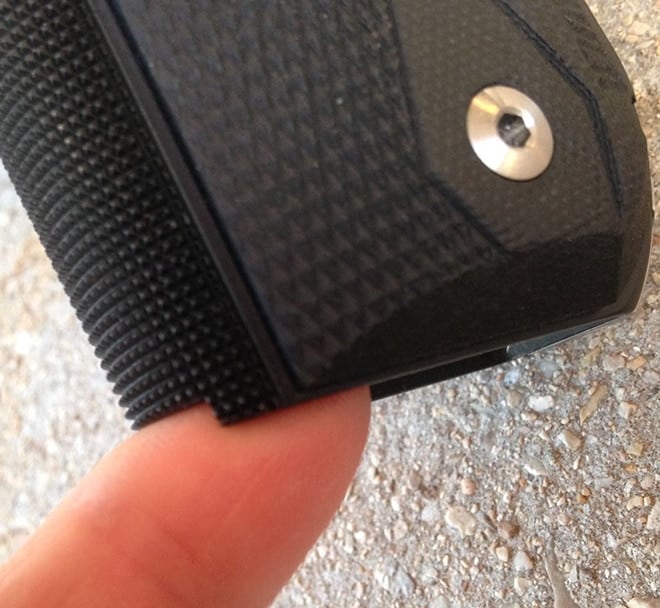 Two quirks cropped up, one being the butt of the grip. At the bottom corners of the front strap is a very sharp notch, made to match the molded plastic floorplate of Sig magazines.  This nasty little feature scratches flesh or snags sleeves when the gun is holstered in outside-waistband/strong side configuration and the mag well is empty.  This problem is nullified when a magazine is in place.

Without de-horning, carrying this gun really would be a bad dream in competitive matches or other settings where a cold range is mandatory. Germaphobes might even term it unsafe; it actually cuts skin if a bit of external pressure pushes the shooter’s arm against the holstered weapon (as when, say, walking through a narrow doorway). 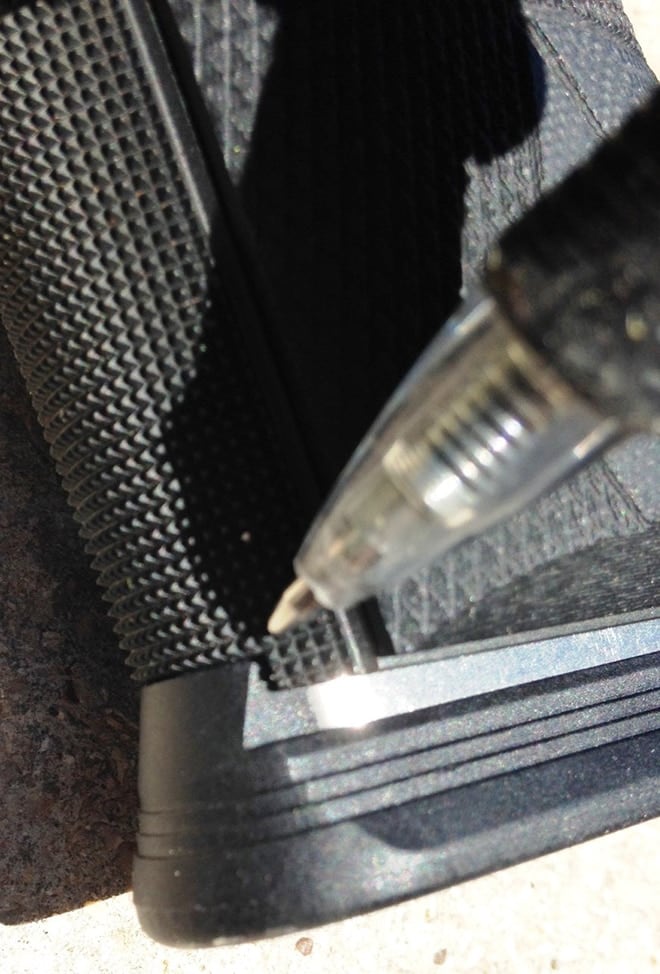 The sharp front strap actually appears to stabilize the magazine when seated, so file at your own risk. (Photo: Team HB)

Unfortunately, this jagged corner appears to be part of what keeps the magazine stable while seated… so filing it down could create a whole new problem.  The author would be interested to hear from users who’ve had the front strap of this gun de-horned—please use the comments section.

The other annoyance is the gun’s appetite for magazines, about as persnickety as the fairytale princess who’s unable to sleep with a pea under the mattress.  Two eight-round mags come with the Nightmare, and they work pretty well.  One doesn’t always fall from the well without assistance when empty. With numerous eight-round samples of Wilson Combat and Chip McCormick magazines, misfeeds were more common than not, especially when loading the first round.  Whether chambering via the slide release or a fairly violent rack of the slide utilizing full compression, using these reputable magazines often resulted in the first round half-chambering (see photo). This also happened randomly during firing sequences with these mags.  Spent casings were flung aside as they should be, but the next cartridge wound up only half-in-battery. 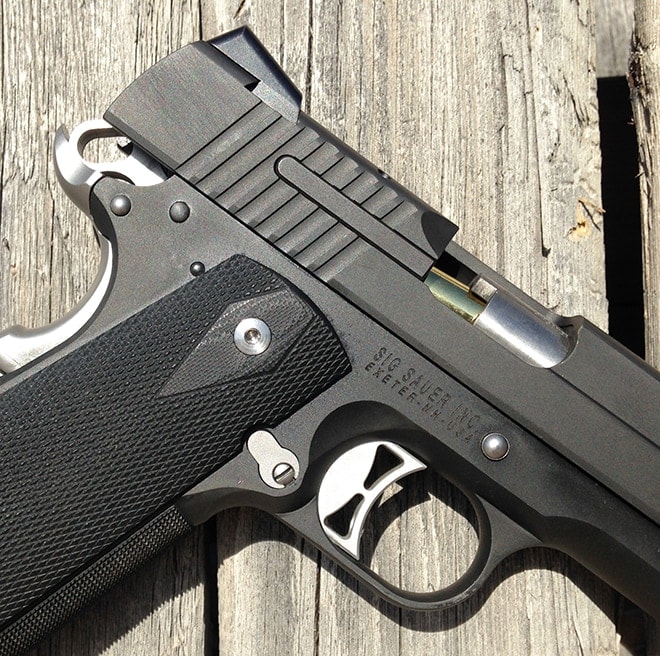 A Kimber TacPro eight-round magazine, which was causing malfunctions in a Kimber, actually worked better than both Sig Sauer and other brands.  Not only did the gun run well with this mag, it also easily fell clear of the gun upon release.

Testing was done with three brands of ammo—Sig Sauer’s own Elite Performance FMJ ($22.68 per 50-round box), Winchester white-box, and Federal  FMJ, all 230 grain. The feeding issue occurred across all three ammo brands with the Wilson Combat and Chip McCormick magazines.

It should go without saying that ammunition and equipment intended for personal defense should be tested in advance, and this is an example of why. For the recreational shooter who’s happy with the two stock magazines, or the consumer prepared to purchase extras at $23.99-$29.99 plus shipping, this won’t cause any sleep loss. The “comforter” here is the 8-round factory mag capacity, in contrast to similar models offering only 7-round capacity.

The Sig Nightmare is 1911 accurate, and a great range gun. (Photo: Team HB)

Prospective Nightmare owners can rest easy knowing this pistol and stock magazines fit traditional 1911 holsters/pouches. After carrying it in a rigid, unlined Blade-Tech holster for two days, the black finish shows very little wear, so we can surmise it’s tough, though no finish is immune to eventual holster wear.

Sig named it the Nightmare, but this 1911 is dreamy in appearance.  In fact, it’s downright sexy.  The black frame is highlighted by six distinct, but not overdone, stainless steel components. At $1,292 MSRP for both the full-size and carry models, it delivers value comparable to others in its class. Not many shooters will want to hide this accurate and attractive gun under the sheets for long.