Smith & Wesson launched a brand new pistol platform called the M2.0 ahead of SHOT Show this year. Offered in several set-ups, the new M2.0 was touted as “one of the most advanced production pistols on the market.” When Smith & Wesson dropped the new digs, I knew I had to get my hands on it.

The M2.0 arrived at my FFL a little over a month ago and since then I’ve had the pleasure of taking her round the block to see just how capable this new M&P really is. 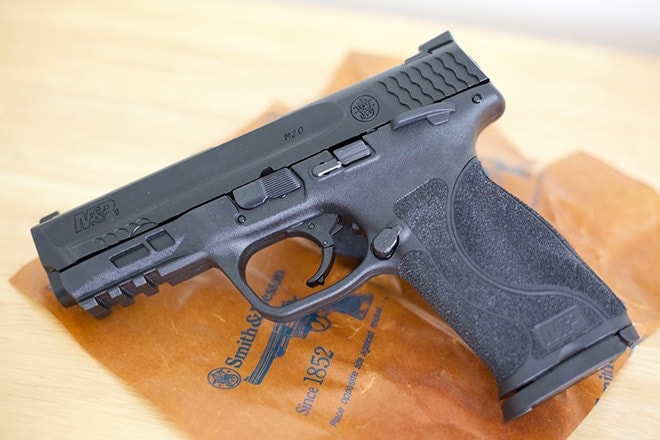 The M2.0 builds on the success of the company’s M&P line of handguns.
Inhand: Despite its full-size status, the M2.0 fits a range of hand sizes thanks to the interchangeable backstrap. (Photo: Jacki Billings)

Smith & Wesson’s M2.0 comes in three builds – 4.25-inch and 5-inch barrel length 9mms and a 4.25-inch barrel 40 S&W. All three configurations are available with a manual safety or without, depending on personal preference. For this review, I received the 4.25-inch model chambered in 9mm with manual safety. Overall length on this model comes in at 7 inches with the pistol weighing 24.7 ounces, making it only a bit smaller than the Glock 17. 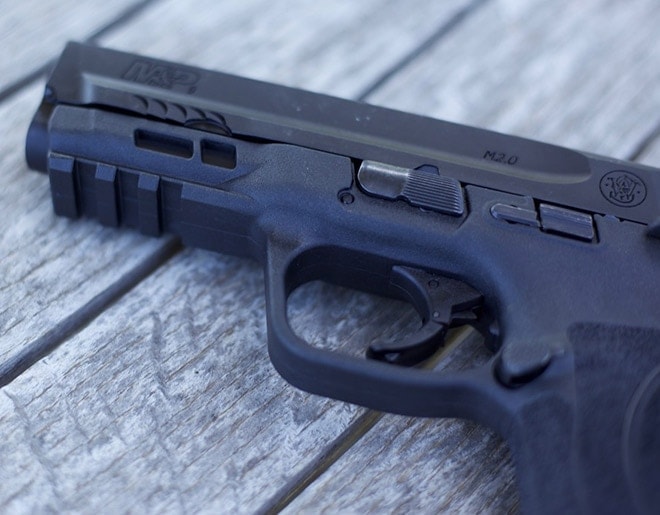 Users can mount lasers or lights to the M2.0’s rail. (Photo: Jacki Billings)

Boasting a capacity of 17+1 rounds, the striker fired handgun features a polymer build with a stainless steel Armanite finished slide and barrel. The front sight is the standard Smith & Wesson steel, white dot which is paired with the steel, white, two dot rear sights. 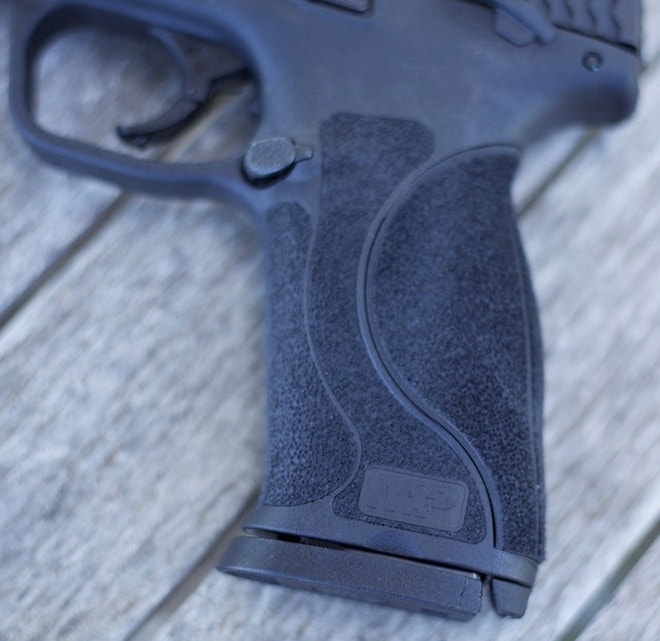 The grip features a texture that offers just the right amount of roughage. (Photo: Jacki Billings)

The polymer grip showcases an aggressive, textured area designed to give shooters a no-slip surface while firing. Unlike the Smith & Wesson M&P Shield in 45 ACP I reviewed last year, Smith & Wesson seems to have balanced the grip surface’s aggression with comfort, resulting in a non-abrasive shooting experience. 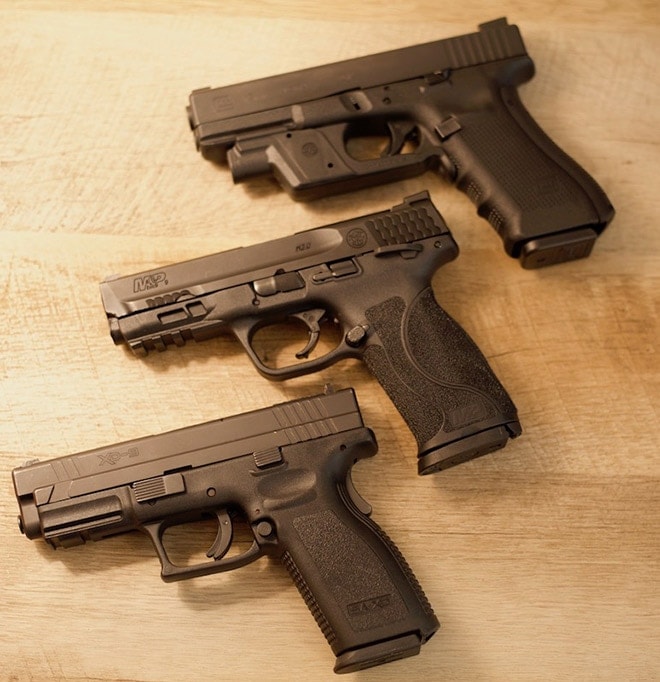 How does she shoot?

The M2.0 accompanied me for a month as I tested her out on both an indoor range and outdoor range at 5, 10 and 15 yard shoots. Putting well over 1,000 rounds through her with a bevy of ammo brands to include Sig Sauer’s 124 grain V-Crown JHP, Remington’s 147 grain Golden Saber, Federal Premium’s 124 and 115 grain cartridges and Freedom Munitions 115 grain loads, the M2.0 proved why Smith & Wesson is still regarded as one of the top gun makers. 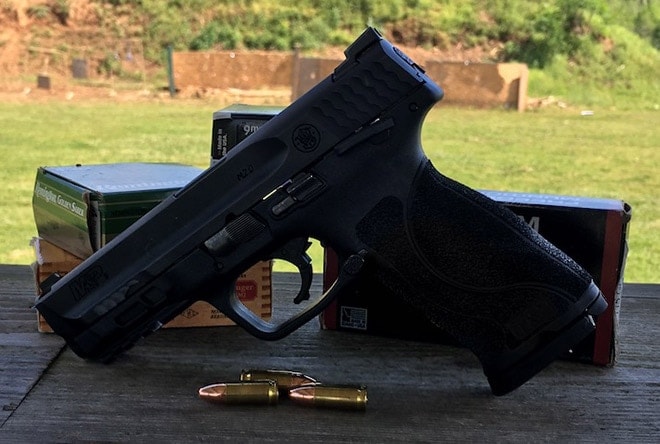 The author tried a variety of ammo of which the M2.0 happily ate. (Photo: Jacki Billings)

First and foremost, the M2.0 proved reliable. Out of 1,000 rounds, I had two malfunctions – failures to eject – that were ultimately shooter induced. Occurring in the first mag out of the box, I diagnosed the issue as weak grip brought on by the large backstrap. Luckily, Smith & Wesson thoughtfully included three other backstraps allowing me to trade down in size.

The grip is easily removed using a tool stowed in the mag well. (Photo: Jacki Billings)

At the shooting table at my local indoor range, I was able to quickly swap out the large backstrap for the small one using the turn-tool nestled in the mag well. The trade was accomplished in seconds and with the newly equipped backstrap I set out to test my theory. As it turns out, I was right. With the smaller backstrap on, I was able to get a much better grip on the firearm and therefore experienced no further malfunctions. 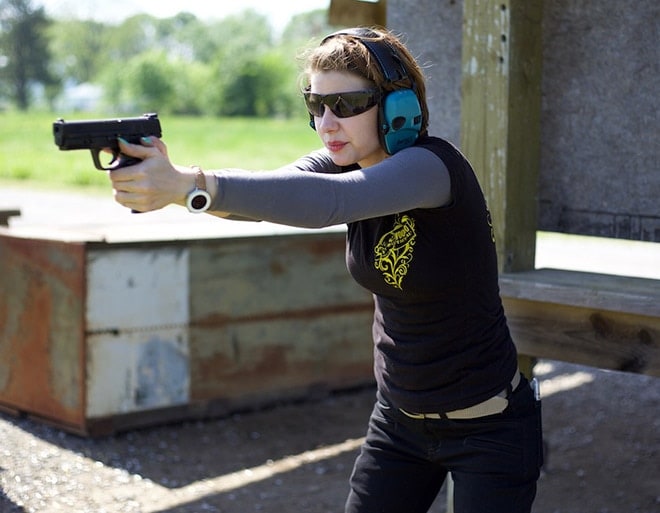 While we’re on the topic of the grip, let’s talk about that texture. Many manufacturers are moving towards a more aggressive style grip surface. The goal is to reduce slip while shooting. The M&P Shield in 45 ACP introduced at the NRA show in 2016 featured a highly aggressive grip that was so abrasive it left me sore after a day’s worth of shooting. I’m happy to report that the M2.0 ditches the pain and instead offers a tactile grip that boasts just the right amount of texture.

Shooting the M2.0 on a sunny, 85-degree day in Tennessee, I never felt that my grip suffered from sweat drenched palms. Alternatively, my hands were no worse for wear at the end of the day and I could have easily plinked from sun up to sundown with the M2.0. 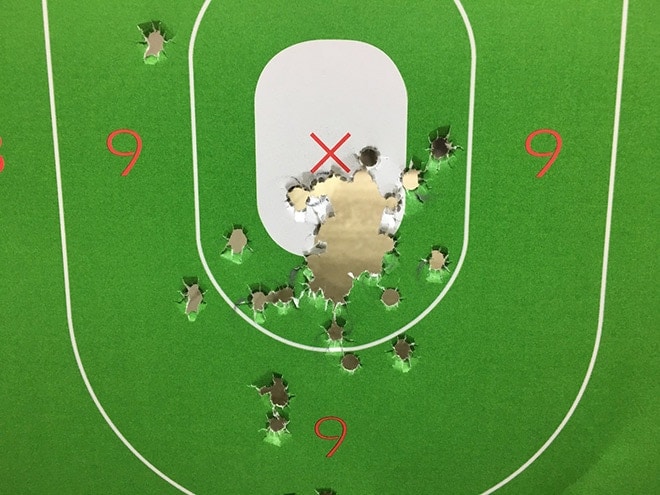 New shooters, especially ladies looking into a full-size learning option, would do well with the M2.0. The large frame aids in recoil reduction, providing for a controlled shooting experience. Aside from the nervous first shot, which I’ll admit I always throw high left, my groups were fairly contained within the target area. Then gun put rounds where I pointed it and with the weight of a full-size in front of me, follow-up shots were predictable. 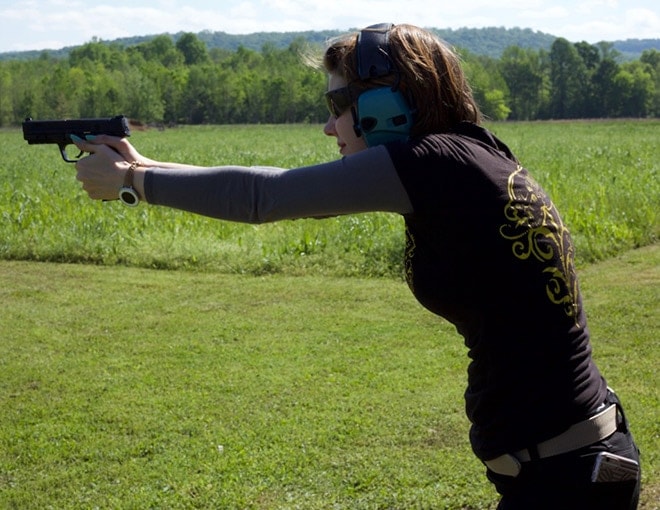 Even smaller framed shooters will find the M2.0 an easy size to manage on the range. (Photo: Jacki Billings)

The M2.0 uses basic steel, white dot sights. As I mentioned in the Shield review, I’m not exactly a fan of the white dots. I find them difficult  to acquire quickly and focus on while shooting, especially in low-light scenarios. Definitely not a deal breaker, though, as stock sights can be replaced with aftermarket options.

What the M2.0 gets right and what it doesn’t

The M2.0, in general, is a no-muss, no-fuss firearm. Utilizing simple and maneuverable mechanisms, the gun is outfitted with features that don’t bog the overall design down. The slide release and magazine release, two buttons that often need some breaking-in before they move with ease, worked right out of the box. There was no struggle, no strains and no stiffness to either one of the mechanisms. They simply worked. 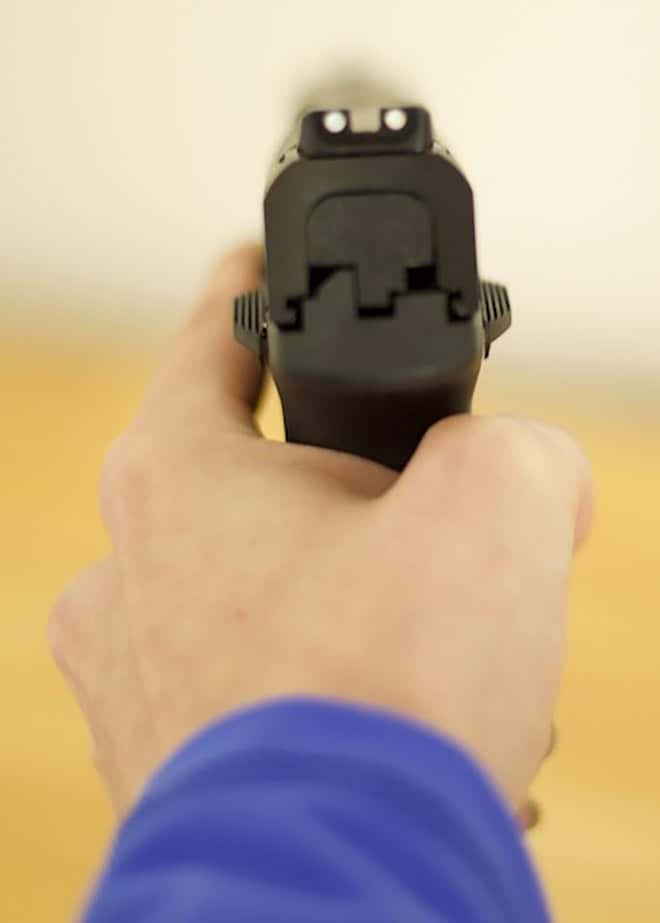 Petite shooters like myself who fear slide manipulation, have nothing to fear with the M2.0. The slide moves freely on the rails, making it a dream to rack. Despite having a petite build with no buff hand muscles, I was able to rack the slide using both the two finger and the full hand techniques. The gliding slide shouldn’t negate the need to learn proper techniques, but for beginners it may prove less intimidating. 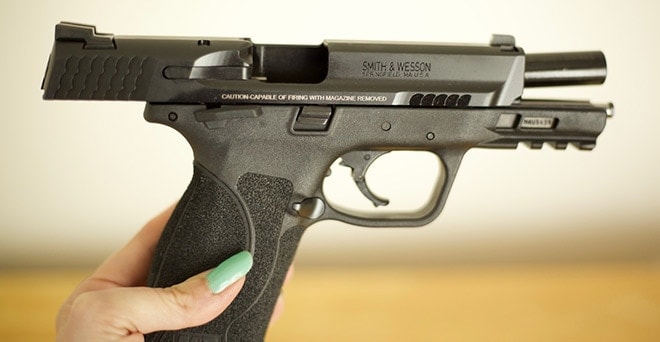 The slide is easily manipulated and moves fluidly on the rails. (Photo: Jacki Billings)

Despite having attributes that play well to its overall ease of use, the M2.0 isn’t without flaws. Specifically, takedown is overly complicated. This is nothing new in the world of Smith & Wesson; but coming off the Honor Defense review where takedown is as simple as a rotating lever, the M2.0 feels more complicated than it is has to be. 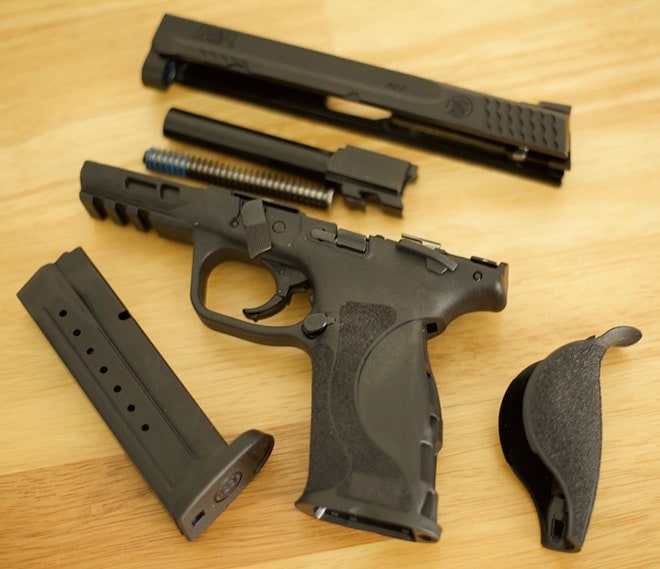 The most glaring negative to the M2.0’s design is its cumbersome disassembly. (Photo: Jacki Billings)

The proper way to disassemble the gun begins by ensuring the firearm is unloaded by removing the magazine and locking the slide to the rear using the slide lock mechanism. Once the user has verified the gun is clear, a small tool stored in the mag well of the gun can be turned and removed in order to move the sear into place for takedown. Smith & Wesson has attempted to make this portion easier by coloring the sear yellow so it’s easily discernible. Theoretically, once the sear has been pushed down, the slide can be slowly released and manipulated forward and off the rails. Theoretically. In my time with the M2.0 I struggled with this method as it was both cumbersome and time consuming, which is why I went to the old trigger pull method. 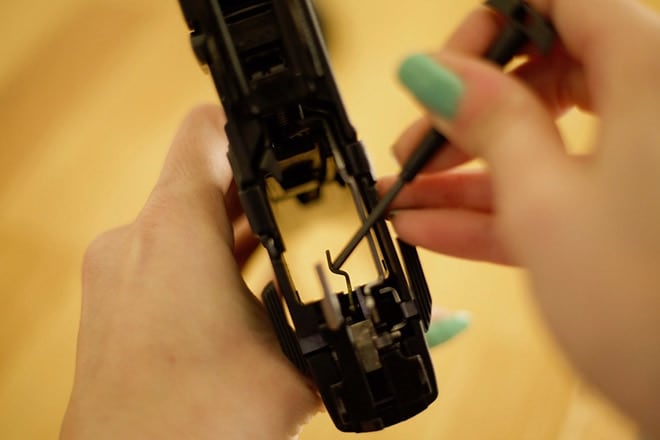 The author engages the sear to allow removal of the slide and barrel from the frame. (Photo: Jacki Billings)

Following the same steps as I do when I clean my Glock or Springfield handguns, I removed the mag, locked the slide to the rear and cleared the firearm. I engaged the takedown level, then rode the slide down as I engaged the trigger. This allowed the slide to move forward and off the rails and I was able to complete the disassembly of the barrel and spring.

Trigger manipulation makes me nervous and I always triple check before doing so as one mistake can easily turn disastrous. However, given the circumstances, this is the easiest means to takedown the M2.0. I, of course, would prefer if Smith & Wesson could engineer a means to disassemble without the need of a special tool or trigger pull. All in all though this is a minor flaw compared to all that the M2.0 gets right in its design. 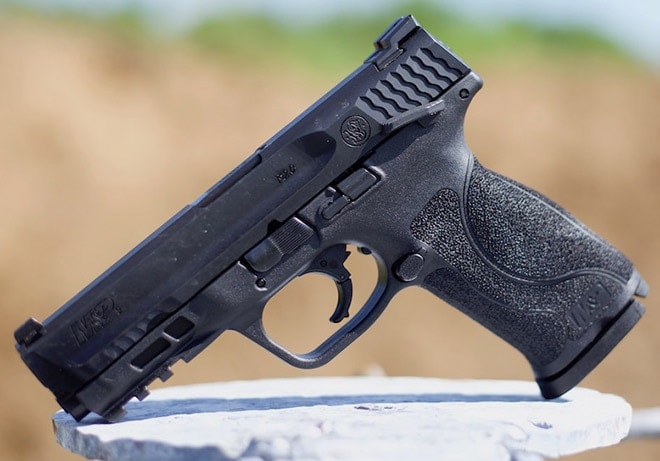 The M2.0 went through over 1,000 rounds with no gun induced failures. (Photo: Jacki Billings)

Smith & Wesson has a reputation for quality firearms and the M2.0 keeps with that tradition. I’ll be honest, I was neutral about testing the M2.0. I figured it was another M&P style full-size handgun. While it doesn’t stray far from the company’s flagship design, the M2.0 is carefully crafted to offer reliable performance on an easy to use platform.

Perfect for new shooters and/or female shooters looking to learn the basics on a full-size pistol platform, the M2.0 is well worth its $599 price-tag.