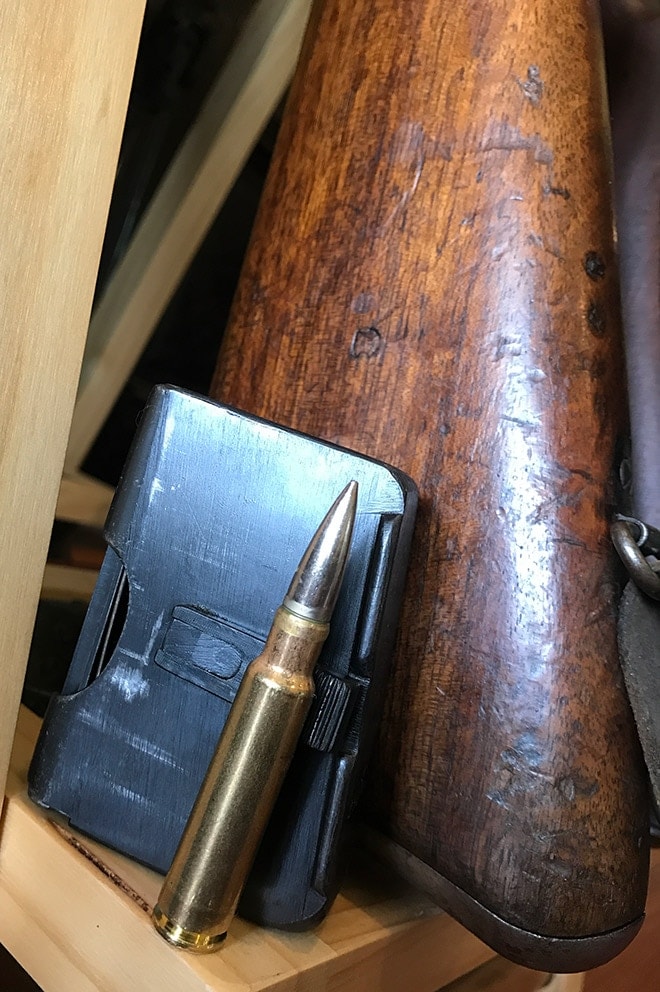 With the exception of the M1 Garand carried by United States troops in the Second World War, during both World Wars the standard issue rifles for the feuding nations were bolt actions. Despite their neutrality, Switzerland was in possession of what surely was the most accurate of all these rifles: the Schmidt-Rubin Model 1896/11.

Designed to fire the intimidating 7.5x55mm cartridge down a 30 inch barrel, the Model 96/11 was, and remains, well beyond exceptionally accurate. Measuring over four feet, the Swiss rifle surpasses the length of other standard issue rifles from the era, even the Mosin-Nagant.

A long service rifle for the era, the overall length for the Model 96/11 is 51.25 inches. (Photo: Hanson Hovell Holladay)

Yet, one of the “gems” of this particular rifle can often be found not on the barrel but beneath the metal butt plate, held in place against the stock by two flathead screws. It was very common for the serviceman issued the rifle to remove the plate and place inside a slip of paper, which had written upon it his name and a series of identifying numbers. It is indeed a nice, historical touch to a beautiful firearm, and, in truth, best kept safe right where it is if you ever come across an example. 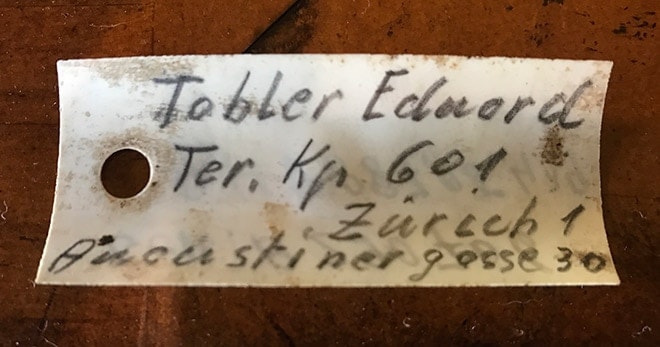 Slips of paper with the serviceman’s name and town were often inserted behind the buttplate of Swiss Schmidt-Rubin Model 1896/11 bolt action rifles. (Photo: Hanson Hovell Holladay)

Like these little slips of paper, there are many unique features that differentiate the Model 1896/11 from other standard issue firearms of the era, such as the detachable six round box magazine with the release clamp on the right side. These elements were only surpassed in value by the series of Lee Enfield rifles used by the English and Australian forces, which were equipped with a ten round box magazine with the release directly in front of the trigger.

Though perhaps lost to the ages, further identifying numbers may help determine the provenance of particular examples of this rifle. (Photo: Hanson Hovell Holladay)

Once loaded, the “Straight-Pull” bolt on the 1896/11 is an artful touch. It allows the shooter to better maintain their aim downrange between firings as it removes the step of lifting the bolt before pulling. However, this peculiarity does require one note of caution: because of the bolt’s grip on the base of the cartridge once in the chamber, the spent casing expels straight up in a vertical somersault fashion when the shooter pulls back — a sure way to smash those light bulbs at the indoor range directly above the booth or receive an unpleasant metal thump on the top of the head if not careful. 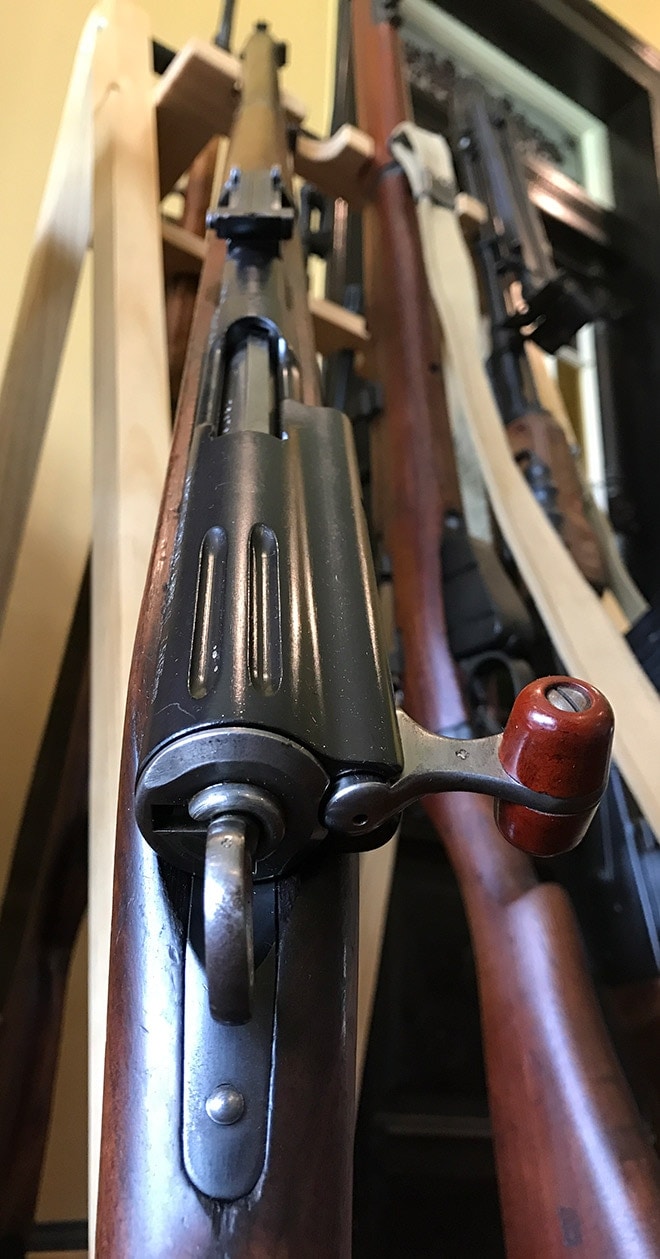 The Straight Pull bolt action may seem like a novelty, but does allow the shooter to maintain their target better while cycling rounds. (Photo: Hanson Hovell Holladay)

Another distinctive feature of the Model 1896/11 is the front sight. It is quite thick, unlike the almost hair-thin front sight of the Lee Enfield, and, to an extent, the Mosin-Nagant of the Soviet Union. For many shooters this enlarged sight allows them to acquire targets much faster without having to continuously shift their focus.

Like most firearms of this era, finding and purchasing newly produced ammunition can get expensive, such as in the case of the .303 British and 7.62x54mm Russian which can often approach $2 per round. At the moment, the only new 7.5x55mm I can find readily available online is produced by Prvi Partizan in Serbia for around $1 per round, and contains an explicit warning that it is not safe to be fired in the Schmidt-Rubin Model 1896, but rather its carbine counterpart, the k31.

Therefore, barring handloading your own, the collector/avid shooter is left with little choice but to purchase surplus ammunition from the Cold War era for about $.50 per round. As many know well, this ammunition is both dirty and corrosive, so it is always important to at least clean the bore of the rifle after every shooting, even if only firing the six rounds of a single box magazine. 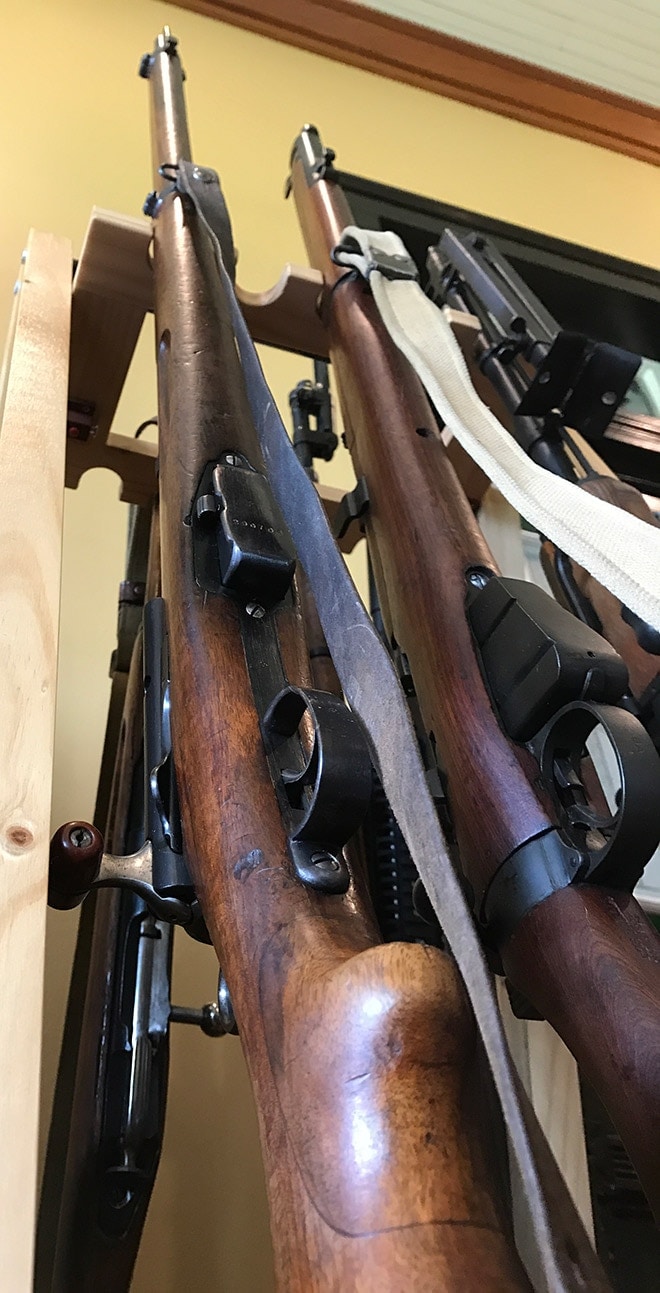 Unique among service rifles of the both World Wars, Swiss Schmidt-Rubin Model 1896/11 bolt action is renowned for its accuracy. (Photo: Hanson Hovell Holladay)

The Schmidt-Rubin Model 1896/11, as well as the k31, tend to be made available in waves. In the US, rifles usually go somewhere in the neighborhood of $300 in good condition. This is indeed an excellent price for a stunning firearm that is worthy of any collector and, above all else, an absolute pleasure at the range.