Magpul D-60 Review: One round for every second (VIDEO)

Magpul’s AR drum mag does what it is supposed to: deliver 60 rounds every time regardless of platform or loading — but there are a few drawbacks.

We got our hands on one courtesy of Gunmagwarehouse.com back in August and have been kicking it around for a few months to see how it held up. 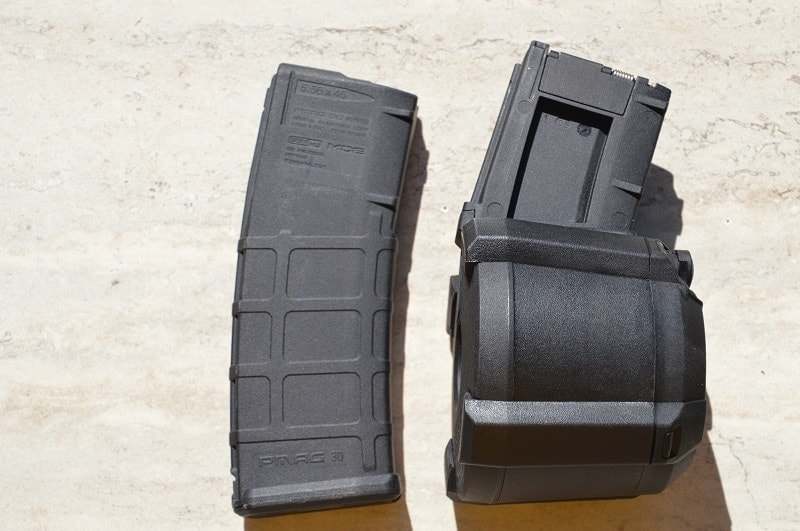 When held next to it’s cousin, the 30-round Magpul PMAG Gen 2, it is roughly the same length — 7.4 inches for each — though it is quite a bit wider. At 4.1-inches across at its most broad, the drum mag takes up the same real estate as three 30 rounders. This translates into being able to use the rifle in roughly the same prone, sitting and standing positions as you would with a standard capacity mag; which is a bonus over some of the old-school 40-round box mags. 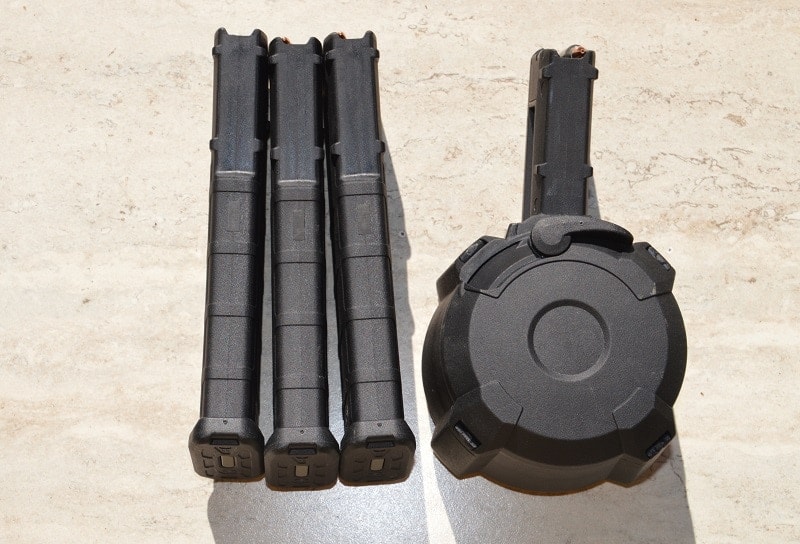 Then there is weight, at 1.25-pounds unloaded with its very snugly fitting dustcover in place, the D60 is a hoss. By comparison, a loaded 30-round PMAG is just a hair over one pound. 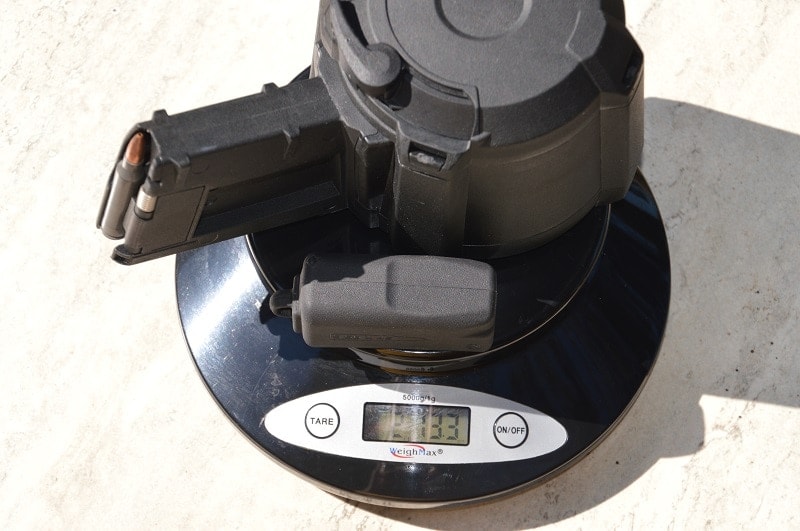 Keep in mind that this is a non-traditional magazine. Most box mags you are used to loading will fill up in seconds — without the aid of a stripper clip or loading devices we timed ourselves loading some GI STANAG mags as well as the 30-round PMAGs and found it was something accomplished in under 90 seconds flat while smoking and joking. 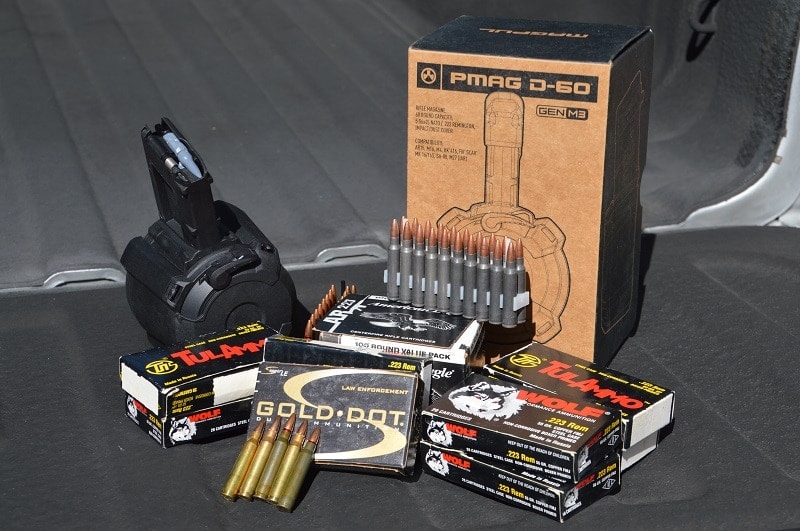 In all, we loaded the D60 seven different times using six different loadings, timing each one. The fastest was five minutes and change. The reason for this is the folding ratchet lever on the front of the drum, which adds an extra step to the loading process.

While the first 5-10 cartridges pop in with no problem and with the lever hardly even needed, each round becomes increasingly harder as the spring takes on more and more pressure. The last 5-10 rounds we found to require as many as three pumps of the ratchet each to get them to seat past the magazine lips — all the while applying pressure on the round. 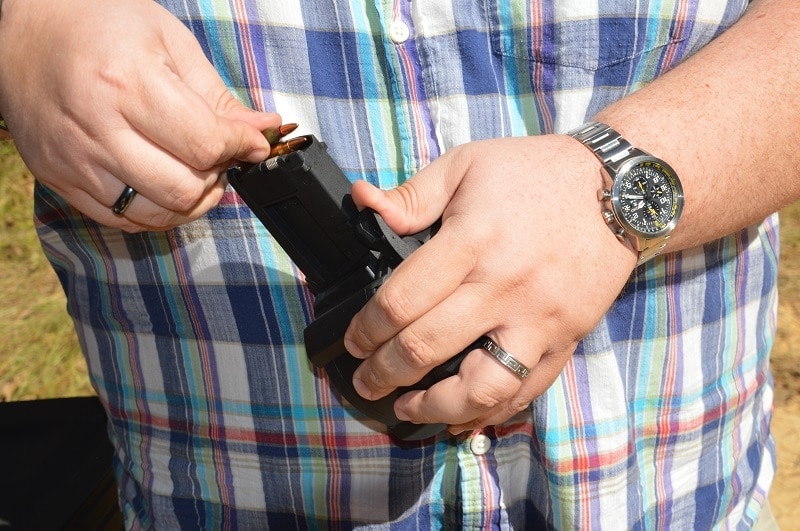 After loading a D60 a few times, you are well on your way to being a thumb-wars world championship contender.

The same features that caused the 50-round drum mag of the Thompson submachine gun to be eschewed by the military at the onset of WWII — it was heavy and difficult to load — are legitimate concerns with the D-60 of today.

While Magpul says the drum is compatible with USGI stripper clips and guides such as the StripLULA, we didn’t try it. 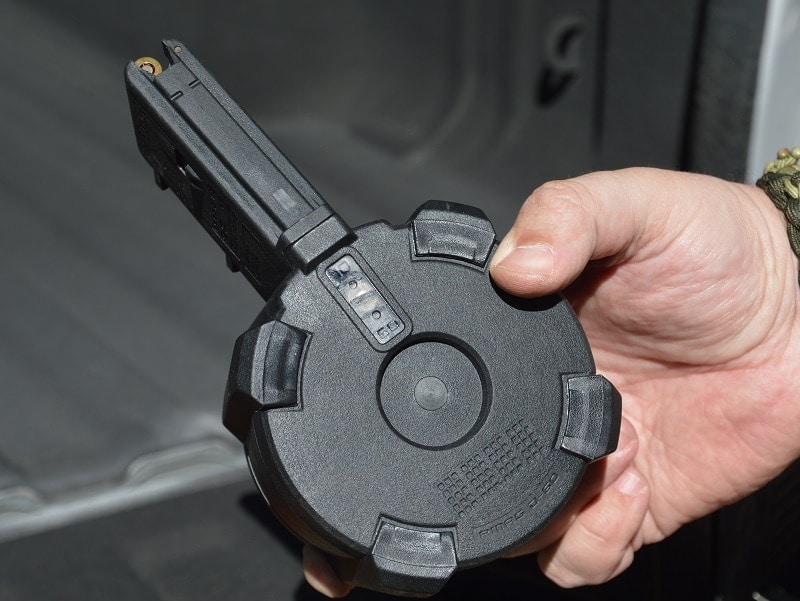 Translucent window gives you some idea of an ammo count. (Photo: Chris Eger)

A translucent window on the back of the drum shows round count to a degree (either 60 rounds or empty, with few stops in between). When loaded, unlike some drum mags out there, it has a very solid feel and does not rattle at all.

A sealed design, provided it is in a rifle with a closed dust cover or the provided cap is attached, it’s highly unlikely that junk can work its way into the magazine.

With gripes about weight and awkwardness of loading aside, the D60 works.

We tried it on four different platforms: two Frankengun AR’s made from PSA mid-length uppers with lowers by Anderson and Colt, a Century Arms Zastava PAP M85 NP pistol, and a Smith M&P15. 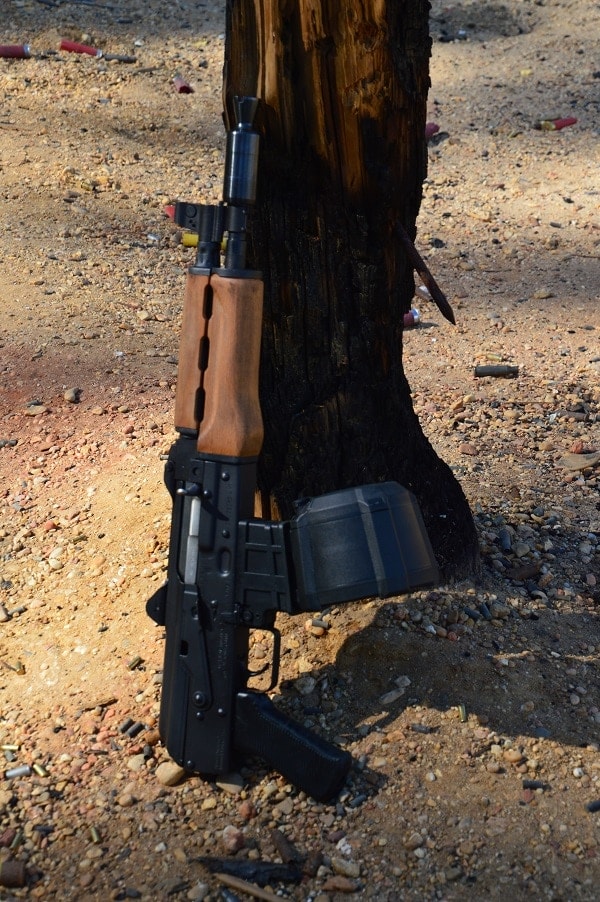 All worked fine, seating a full magazine on a closed bolt, emptying it, and then locking back the bolt.

The only failure experienced is in our video above. We mixed 60 rounds from all six loads and on the sixth cartridge, the cartridge loaded but did not fire when struck by the hammer and had to be manually ejected. On inspection, the round, a lime green Wolf 55, had a light primer strike that was no fault of the magazine.

We loaded some Simunition marking rounds and cycled them by hand with no issue.

Finally, there is the price

With the D60’s MSRP at $130, you can buy a dozen 30-rounders for the price of one drum, making a clear choice for some. On the bright side, D60s are marketed at almost half the price of an X-Products X-15 50-round drum and about on par with Sure Fire’s 60-round coffin mag. 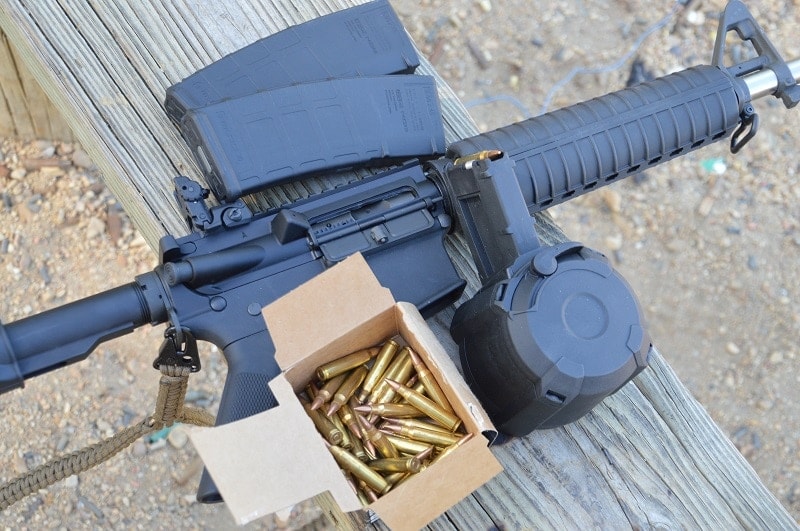 Overall, the D60 has some drawbacks when it comes to weight, price and loading, but it works very well and we found it to be reliable.

It all comes down to the end user’s desire or need to have 60 rounds ready– without a reload which can cost precious seconds you may not have– as to the ultimate test of if you need a D60 in your life or not.