Coming in at a diminutive 6 inches in overall length with a mere 3.4 inch barrel and weighing in at 1.25 pounds, the Pistola Automatica Beretta modello 1934 9mm pistol was the preferred sidearm for Italy’s infamous dictator Benito Mussolini. But that’s just one reason why it’s now such a valuable pistol. 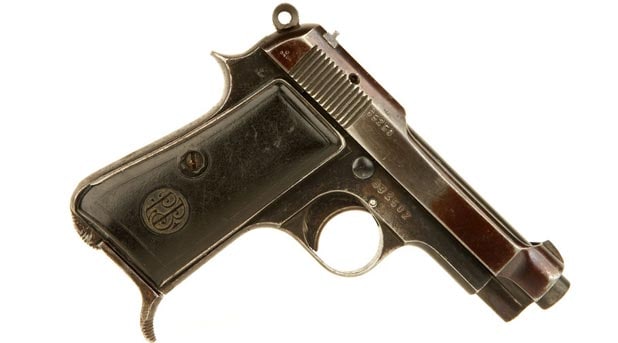 The Italian army adopted it in 1934 and replaced the Model 1915, the pistol that it sprouts from. The Model 1934 had a different chambering. Instead of using .32 ACP, which was common for those days, it was 9mm Corto (or .380 ACP), which had a higher muzzle velocity than its predecessor of 950 feet per second.

After the year 1919, the 1915-design became an outline for most other Beretta pistols. And by the time the modello 1934 made its debut, the classic Beretta appearance had made its mark and become well known. It had a snub outline and the front of the cutaway receiver, which wrapped around the forward part of the barrel to carry the fixed foresight, was athletically pleasing to most people. Its short pistol grip carried only seven rounds, but to ensure a better grip the company’s characteristic spur was carried over into the new design. With none of the usual frills associated with some other pistols, the 1934 had a conventional blowback design. 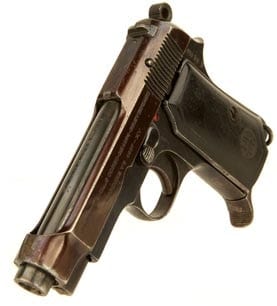 The 9mm short round was one of the classic pistol cartridges that came out of World War II and was somewhat exclusive for Beretta designed guns. Pistols chambered for the cartridge were known for reliable feeding and extracting in turn the Model 1934 became a sought after trophy for allied troops during that war. Original examples in good condition are extremely hard to find nowadays, but when one in good working order is found it invariably brings a high dollar figure. Back in the war years British and American soldiers did a thriving trade in captured pistols to the people manning the rear echelons. They paid almost anything for a piece of history and something to show the folks when they finally got back home.

Although it had an excellent design, it did have one unfortunate flaw. The manual safety affected the trigger, but not the exposed hammer. So, even though the trigger was technically locked when the safety was applied, the hammer could still be cocked either by hand or by accident.

There was a 1935 model produced for the Italian air force and navy, but its production numbers were rather low in comparison to the 1934. The 1935 model was manufactured around the 7.65mm round only. The Germans adopted the design into their military on a limited basis, and referred to it as the Pistole P671(i). Despite the weapon’s overall success, however, it was somewhat underpowered and never posed any real threat to Allied forces. Nonetheless, gun enthusiasts can see similarities between the 1934 and the Beretta 92FS, or the current standard issued pistol of the US military.