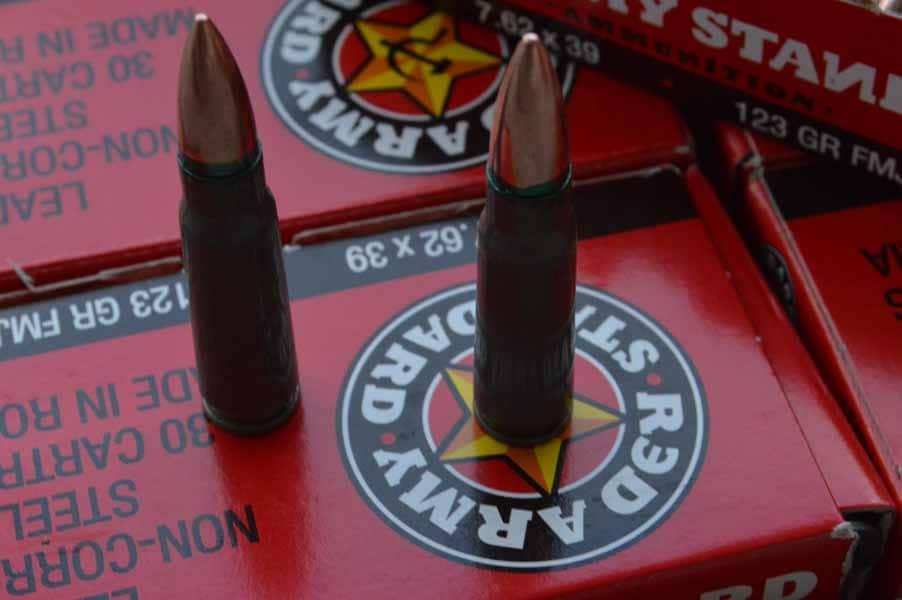 Is most glorious round of perfect rifle, AKM (Photo by Jim Grant)

Recent hostilities in Crimea had many gun owners worried that reserves of cheap Russian ammunition may dry up. Russian ammo manufacturers have repeatedly denied these claims, but the Internet rumor mill continues to fuel the flames of conjecture and hyperbole. Don’t worry, your AK’s favorite snack — excluding capitalist tears and partisan sweat — will not be eliminated. Thank your stars for Red Army Standard ammunition.

Imported by Century International Arms, Red Army Standard ammo is manufactured in the Ukraine and Romania and comes in 9x18mm, 5.45x39mm and classic 7.62x39mm varieties. I got my hands on two cases (2,000 rounds) of 7.62x39mm to test and evaluate. After 1,500 rounds with no malfunctions, I’m impressed.

I assessed the ammo with four different rifles that run the gamut of AKs. I shot each rifle 10 times from a bench at 45 yards (range construction limited me to this distance). Also, I tested the rifles using iron sights because optical sights were only available on two rifles. 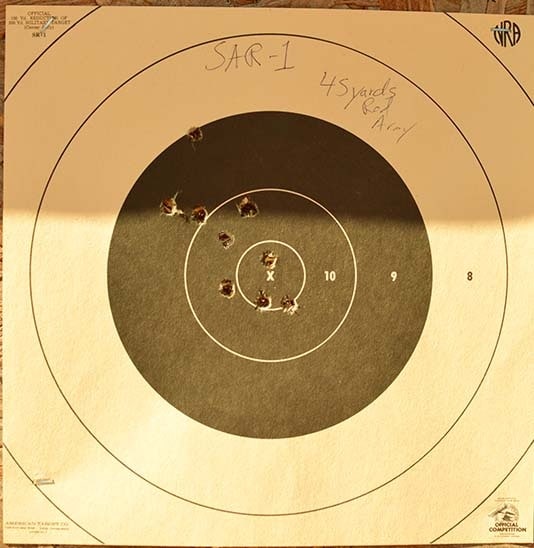 The first test rifle, an SAR-1, represents the lower end of the price spectrum for AK rifles.

The model tested had surface rust on its gas tube and its tang removed via angle grinder for a review of Manticore Arms’ folding triangular stock.

The SAR-1 performed very well considering that its sights were manually straightened with a pipe and a really strong guy. It typically groups around 6 inches at 100 yards, so this grouping is definitely an improvement. 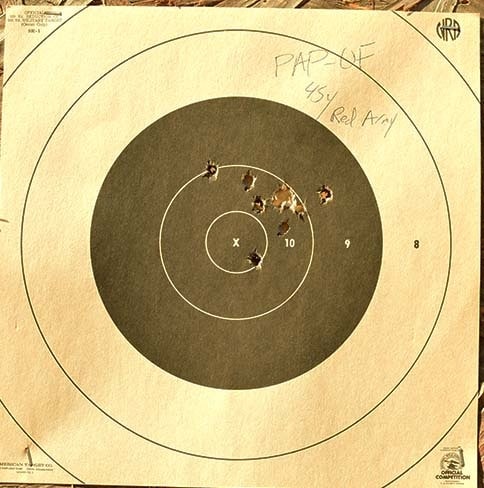 The second rifle, a Serbian under-folding PAP, featured a more robust construction and new non-chrome-lined barrel, which aids in accuracy. I lightly oiled the rifle before test firing, but otherwise, it was factory new.

The PAP-DF is more accurate than the SAR-1 and this group typifies that. 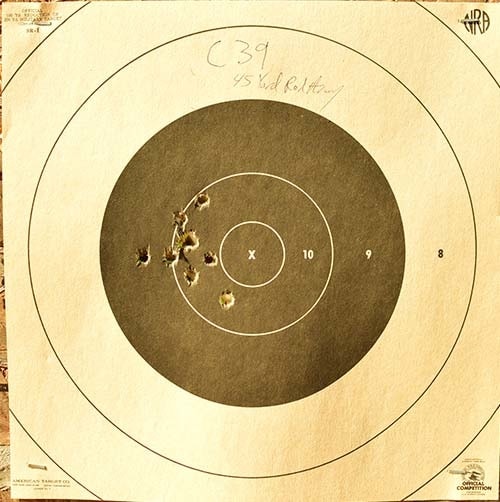 The C39’s group seemed to open up as the barrel warmed. Though the accuracy is still excellent for an AK rifle.

Tula Ammunition’s point of impact was different by about 2 inches, shooters changing from Tula to Red Army, should confirm their zeroes and adjust accordingly. 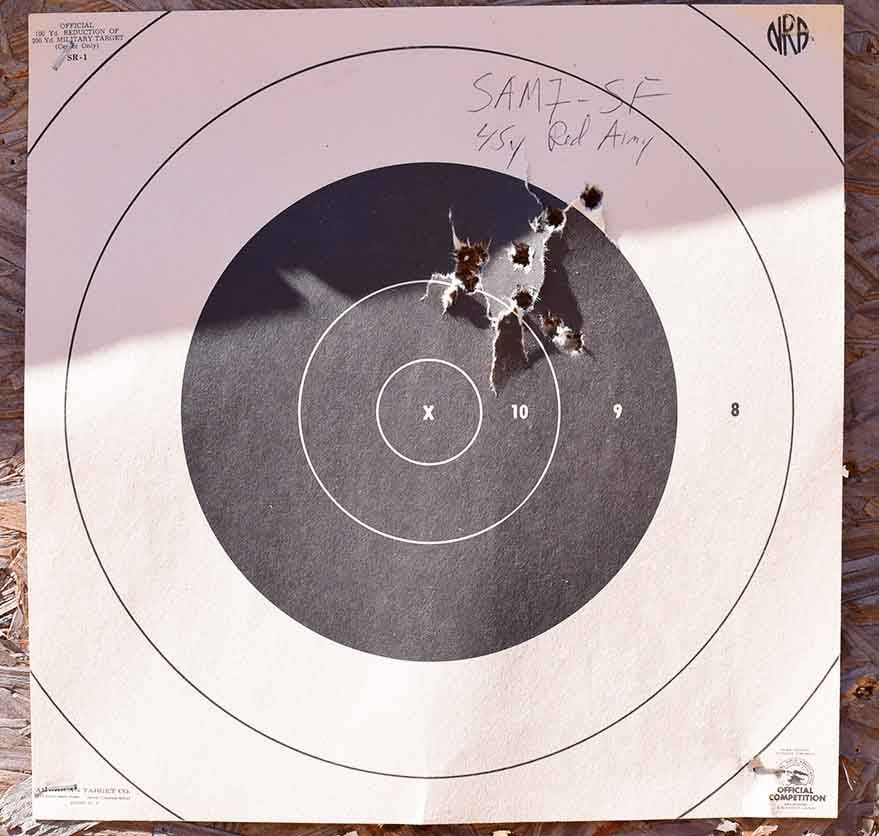 You get what you pay for, the SAM7SF shoots excellent groups (Photo by Jim Grant)

The final test gun is one of my favorites, the Arsenal SAM7SF, a milled Bulgarian AK rifle with a folding stock and selector switch that is reciprocated in the pistol grip. The SAM7SF is the most expensive rifle tested and represents Arsenal’s premiere Avtomat Kalashnikov rifle.

The SAM7SF’s groups were excellent and slightly better than the C39, though they are very close. I suspect the improved trigger of milled rifles and the rigid receiver contributed to this. This limited test confirms that milled rifles are more accurate than stamped ones. Though a more thorough evaluation of dozens or hundreds or rifles would be necessary to built a scientifically sound theory.

While the garish packaging exudes a lighthearted mocking of Soviet propaganda, Red Army Standard ammunition is a serious contender to Wolf Ammo in the realm of Russian calibers. I wouldn’t feel nervous with a bug out bag full of Red Army ammo ready to feed my AKs. 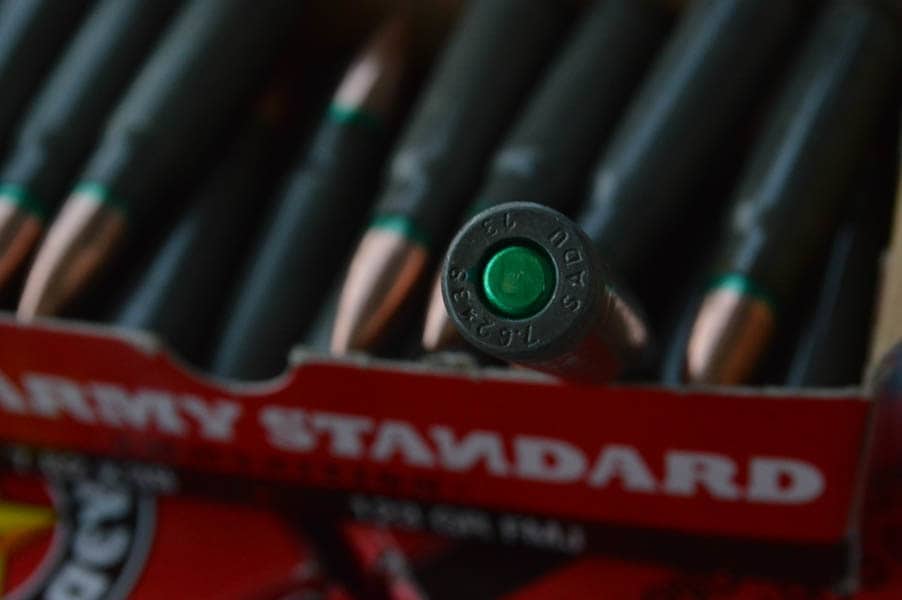 Ammo so good its primers are green with envy of the bullets. (Photo by Jim Grant)