Review of the Clone: The EAA Witness

The EAA Witness line of pistols is interesting because it is a virtual copy of the ever-popular CZ-75 pistol. The design isn’t just strikingly similar – it’s a clone!

The story goes, when the CZ-75 was introduced the design was deemed “secret” by the Soviet Union, so the designers were unable to secure a patent on the design in turn replicas were made by a numerous companies across Europe. One of those replicas was the Tanfoglio Force and it quickly gained a very good reputation commercially.

So much so, Tanfoglio produced a handful of variants. And circa 1999, the line was imported to the United States by the European American Armory Corporation and marketed under the name “Witness.” 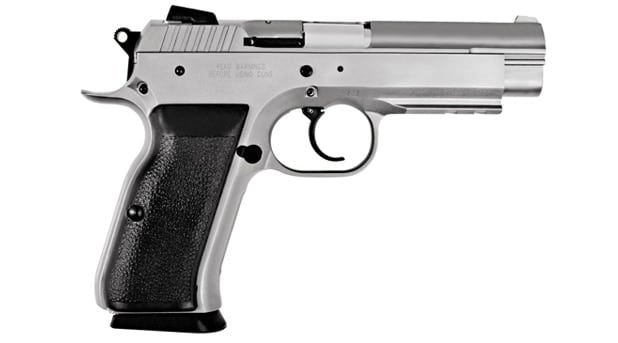 Now it’s the EAA’s bread and butter. Besides the popular 9mm variety, EAA Witness pistols also come chambered in 10mm, .45, .38 Super, .40 S&W, and even a .22 Kadet model. All the EAA Witness models are based on the same frame, interestingly enough. Kind of a “one size fits all” type deal. And “yes” they can all be converted to fit the different calibers.

The pistols are all-steel, making them more desirable for those of you who enjoy traditional designs like the Browning Hi-Power or a M1911-platform. And where features like the safety and slide stop/release are in the same places. The Witness also has a pretty significant beaver-tail, allowing users to hold the gun higher without fear of getting bit by the slide. (But there are polymer and match Witness pistols available, too).

Like the CZ pistols, the slide rides inside the frame on full-length guides, adding to the gun’s accuracy and longevity while also giving it a much lower profile. Furthermore, the EAA Witness features a rounded hammer that can be half-cocked, just like the CZ. Unlike the CZ, the safety can be operated with the hammer in any position, preventing it from moving anywhere.

Because the pistols were designed using the CZ as a platform, they are very ergonomic and streamlined. Anyone who has ever shot a CZ-75 knows how comfortable it feels in the hands.

Similar to the CZ, the EAA Witness can be fired in double or single-action mode. The trigger, especially set in double-action, breaks at a very heavy 13 pounds, but it’s a pretty smooth operator. In single-action, it breaks at a much more acceptable five pounds.

Where the Witness differs from the CZ is it features a slightly lower-profile rear sight. The trigger is black, which is a nice (and pretty cool, if you ask me) contrast to the light-colored frame and slide. EAA calls it a “Wonder Finish,” which is just the name for its proprietary heat-treated, stainless steel finish.

Models produced after 2006 feature a Picatinny accessory rail for mounting things such as lights to the pistol. A lot of folks like these, I don’t. No real reason, either, other than I think it takes away from the smooth lines of a nice weapon. Nevertheless, it is practical. To each his own, of course. 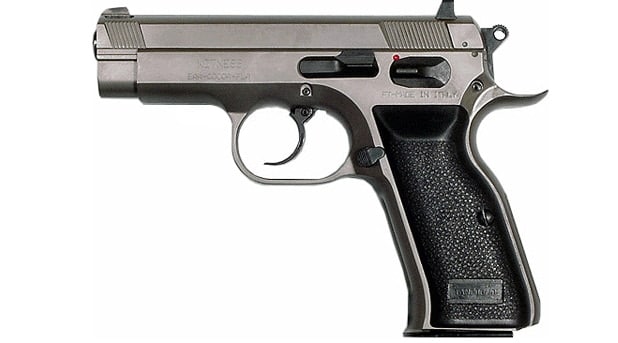 Now, for the bad: Through independent, real-world research of my own on forums and message boards, I have heard quite a few negative things about the Witness line. Mainly, the larger caliber setups tend to crack at the frame or slide. However, most of the people who bought 9mm Witnesses report no problems, but the 10mm and .45 versions seem to let go easily. Just food for thought.

The guns are priced fairly that’s for sure. MSRP is $545, but many can be had for less than $400. They are well-designed pistols that have been around a while, but seem to have a couple major drawbacks with the cracking frames and slides. If it were me, I would save up a couple hundred more dollars and get something I knew would last, but I completely understand living on a budget and wanting a firearm. Trust me, on that one. If anything, the .22 or 9mm would be the way to go.