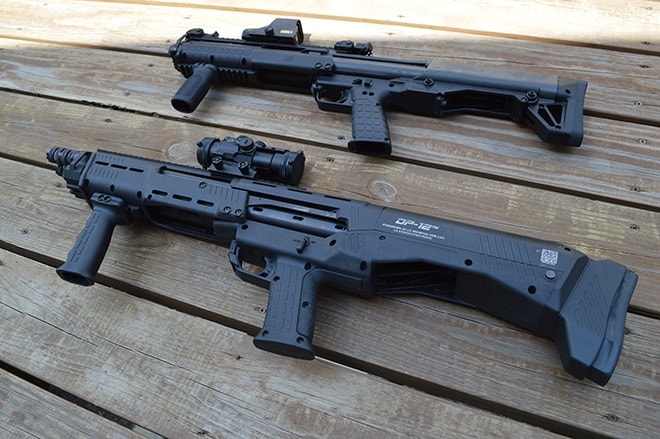 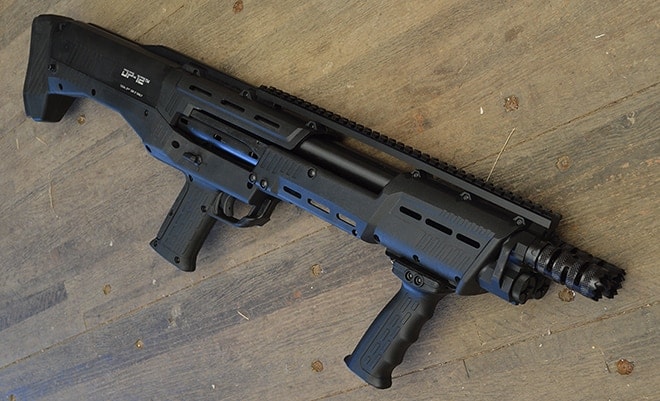 The DP-12 moniker comes simply from D-double, P-pump, 12-gauge. It’s a double barreled pump action shotgun with a 16-round capacity and inline feeding tubes. Barrels are 18-7/8”, machined from bars of 41-30 steel, and accept Tru-Chokes.  The optional door breaching spreader chokes are plain cool.  Standard Manufacturing is an offshoot of Connecticut Shotgun Manufacturing, builder of fine doubles and custom shotguns.  Headquartered in a three-acre building in New Britain, CT, Standard Mfg is an American company building the DP-12 from start to finish on home turf. MSRP is $1395.

Kel Tec’s KSG shotgun features a single 18.5” barrel, dual magazine tubes, and a 14-round capacity of 2-3/4” rounds in the tubes.  Feeding is manually selected with a lever behind the trigger guard while the pump release lever is located in front of the trigger guard.  The KSG weighs seven pounds empty and wears a soft rubber butt pad.  It measures at just a hair over 26” overall. The KSG has been on the market much longer and has worked out many kinks in that time.  Its MSRP comes in significantly lower at $990. 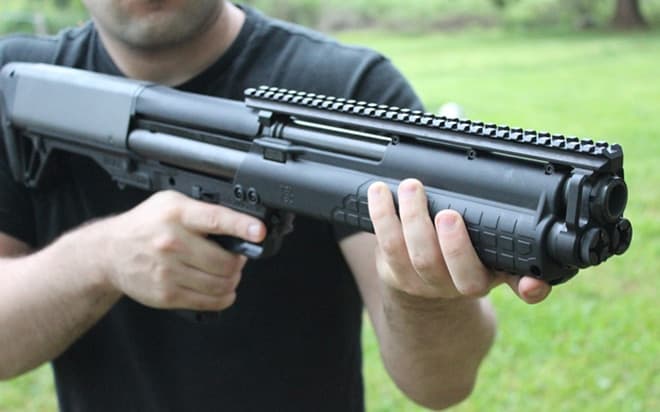 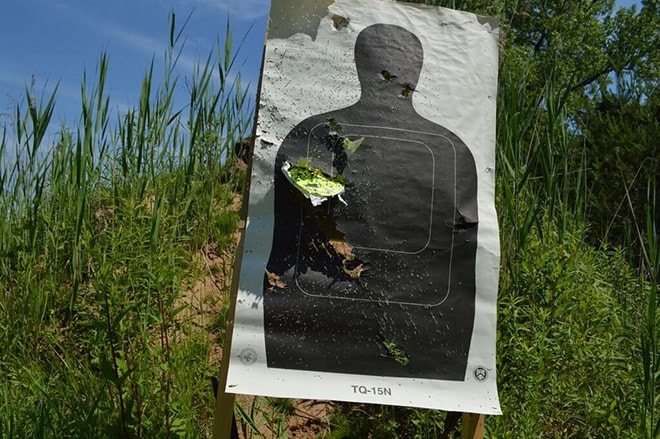 Why are we testing for accuracy?  We’re not, really.  The point is, at the ranges of these bullpup shotguns, both are equally capable.  The truest test comes down to reliability of feeding because these pups are all about rapid fire, blowing away soda bottles and tearing up paper targets.  They are equally accurate at bedroom distances as well. On a more quantitative measure, the DP-12 comes with interchangeable spreader chokes, and sells a sweet set of door breachers. Shooters seeking chokes for the Kel Tec must first buy the KSG Choke Tube adapter, which then allows for WinChokes.

The offset feeding from two tubes on the KSG led to early reports of feeding issues. (Photo: David Higginbotham)

Rather than offset feeding, the DP-12 feeds entirely inline and functions flawlessly.  They had the luxury and the ability to learn from the mistakes of others, including Kel Tec.  While the KSG has gone through several generations, the earlier versions had their issues with feed reliability, drawing from two magazine tubes to feed a single center barrel. Later models have worked out the kinks, however; but the edge still goes to the DP. Besides, it’s very possible an adrenaline laden shooter forgets to switch to the second tube on the KSG.

The KSG has a 14+1 capacity, with two tubes holding 7 shells each. (Photo by Daniel Terrill)

The DP-12 houses an ungodly 16-rounds of 2-3/4” 12 gauge ammo in the dual tubes.  The KSG’s dual tube magazines hold 14 rounds of the same ammo. While a two round difference is hardly reason for superiority, the KSG can only be set to feed from one side at a time. Once one tube is empty, the shooter must manually select the other magazine.  The DP-12, however, pulls from both mag tubes with each pump, granting true double tap capability and better use of the high capacity. 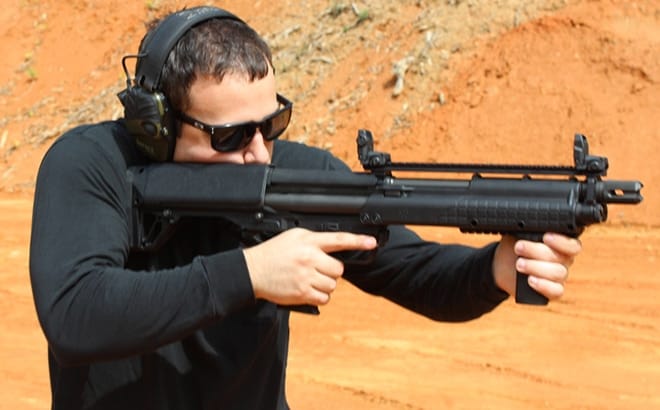 The KSG requires the shooter to manipulate a selector to switch tubes, which could slow the process. (Photo: David Higginbotham

Both guns take some getting used to, no doubt.  But the DP-12 gives you two shots with each pump and does not require flipping a switch between magazines like the KSG.  With little practice, the DP-12 can be emptied of its 16 shots in 8 seconds.  The KSG takes a little more practice, and our fastest shooters emptied the 14 rounds closer to 15 seconds for fewer rounds. For what its worth, it is very easy to short stroke the KSG given its build; even our experienced shooters short-stroked the KSG several times.  However, nobody did so on the DP-12.  Something to consider if you’re using these guns for defense—bullpup shotguns slide differently, with the stroke coming back closer to face-time than standard pump guns and adequate practice is required. 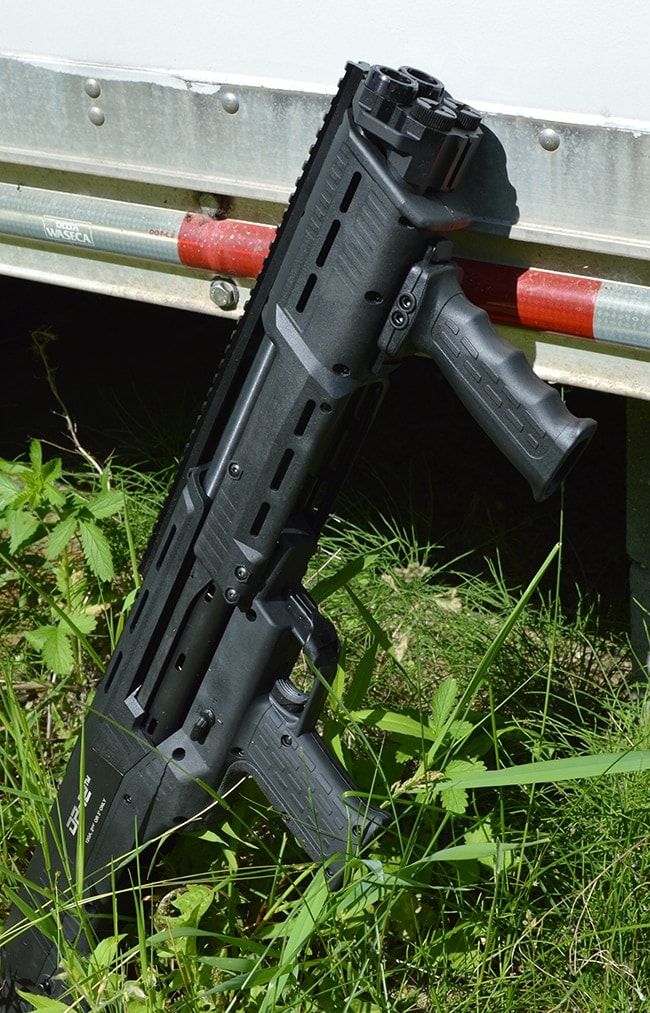 The DP-12 is built from one solid block of aluminum. (Photo: Kristin Alberts)

It’s not entirely fair to compare two guns of such different price points on quality.  Nonetheless, DP-12 would beat almost any gun out there based on build quality.  This is not a polymer piecemeal weapon. The DP-12 is built from one solid block of 7075 aircraft grade aluminum. Kel Tec achieves lighter weight and lower price by utilizing significant amounts of polymer, in the stock, forend, and receiver areas.

Kel Tec really opened up the market for bullpup shotguns here, but it is Standard Manufacturing that perfected it with dual barrels and one solid chunk of metal on the DP-12.  Inline feeding, picatinny and MOE mounts, chokes, etc. What looks like an awkward buttpad area on the DP-12 is actually a spring loaded recoil mechanism.  Though the Kel Tec has more than adequate picatinny rails and a soft rubber butt pad, those features have become expected. 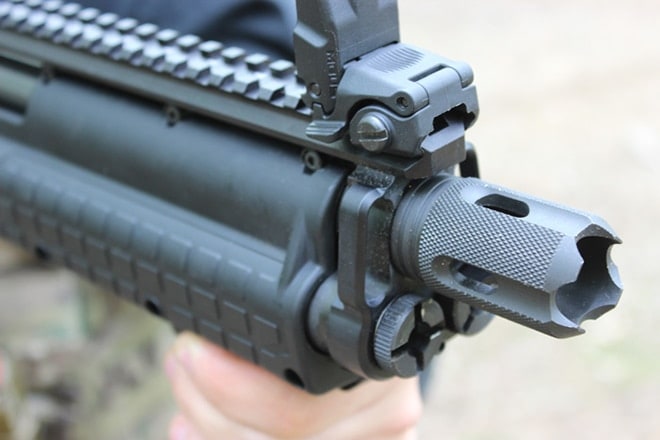 While there have been hiccups along the way for Kel Tec regarding reliability in both feeding and parts issues with earlier generations, the DP-12 is overbuilt and has yet to miss a beat, though it is quite new.

The DP-12 is still in introductory stages and its initial model for 2015.  What you see is what you get.  On the other hand, the KSG has been on the market for almost four years.  Though a complete list of colors is quite elusive, I’ve seen the KSG come from the factory in OD Green, Coyote Tan, Titanium, and Patriot Brown. 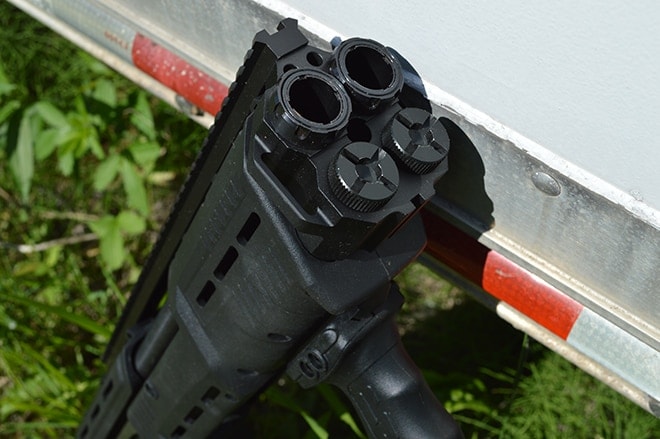 The KSG’s feed lever and pump release are both mounted back and front of the trigger guard, respectively, making them ambidextrous, as is the safety. Likewise, Standard Manufacturing had the forethought to make both the AR-style safety and the slide release ambidextrous and easy to reach.

Sure it’s hard to call a tie when one is lower priced than the other. The DP-12 is cost-prohibitive for many at $1395, especially since prices have yet to come down.  However, quality comes with a price tag.  The KSG, on the other hand, is much more accessible to a wider audience.  With a $990 retail, more and more KSG’s are showing up around the $750 mark.  If bullpup shotguns are your forte, then both the KSG and the DP-12 are worth their cost in terms of what you get.  It just depends what you want. 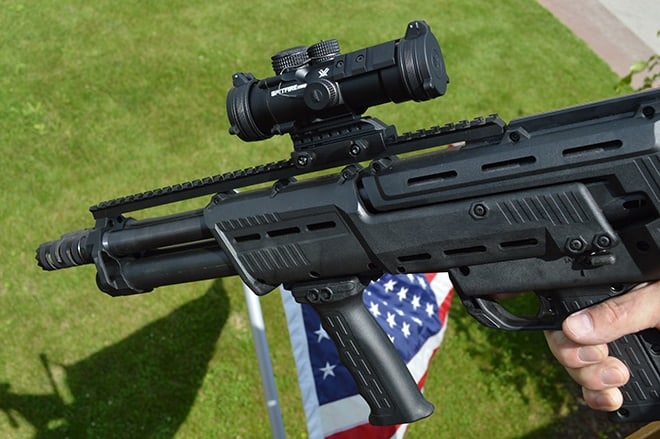 The DP-12 is expensive and overbuilt for sure, but also definitely my pick for the money. (Photo: Kristin Alberts)

The overbuilt nature of the DP-12 comes with more than just a heavier pricetag.  It’s a heavy gun at 9# empty and over 10# loaded.  The use of weight-saving polymer on the KSG shaves weight, putting it at 7# empty and just over 8# loaded.  While the KSG total length is just over 26,” the DP-12 is 29.5”.  The KSG is easier to carry and maneuver; the DP-12 has significantly less felt recoil.

Thankfully, Standard Manufacturing broke the exclusive CTD sales deal, making it available from most distributors. Still, it has been a limited run and difficult to find.  The KSG was the same for the longest time, and has loosened up some now and will be much easier to find both online and in gun store racks.  Turns out either the demand for both exceeds inventory, or the companies are both playing the game.

Have your cake and eat it two

The Kel Tec KSG is easier to find, available in more color options, cheaper, lighter and fun to run.  Kel Tec is an innovative company that had the sense to introduce the Neostad design to an American market.  I look forward each year to seeing what the masterminds at KelTec have come up with, and the KSG is not to be written off.  The KSG provides lots of bang for the buck, literally.

But in this case, two really is better than one.  The two barrels of the DP-12 immediately set it apart from the competition and the solid construction keeps it at a distance.  Assuming I desire a bullpup shotgun, and knowing everything is a trade-off, I’d pony up the extra cash for the DP-12 knowing that though I’m buying a heavier gun, I’m also getting a superior build with greater reliability, less felt recoil, higher firepower, and the joy of two barrels.