The benefits and drawbacks of operating a Glock 40 pistol 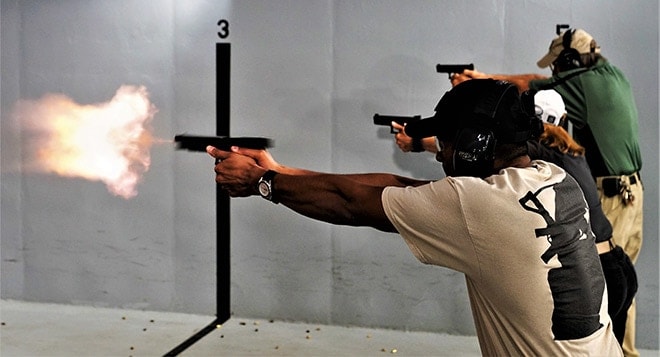 The author stands out at the firing line with the muzzle blast on his Glock 40 at Glock’s two-day Operator Course in Smyrna, GA. (Photo: Kasev Sundar)

Glock has almost an unparalleled reputation for producing top-notch pistols that are relatively easy to maintain, modularize, and operate while at the same time being extremely accurate. It is for these reasons that these weapons are among the most popular service pistols chosen by law enforcement agencies in the United States.

After conducting my own research on Glock pistols and completing Glock’s armorer course, I became intrigued with Glock’s collection of 10mm Auto handguns. This was primarily because the 10mm Auto is a caliber that is not frequently used in today’s firearms market.

The Federal Bureau of Investigation initially commissioned the use of 10mm Auto pistols as its standard weapon in the aftermath of a now famous shootout during a bank robbery in Miami in 1986. However, the FBI decommissioned its use as its standard service weapon due to the large amount of recoil of the ammunition. They instead chose .40 S&W pistols as their standard service weapons since the .40 S&W round was the same caliber as the 10mm Auto but with lighter recoil due to its smaller length and lower amount of gunpowder in the cartridge.

The FBI still kept some 10mm Auto weapons for use with their Hostage Rescue Teams and special surveillance teams because of the round’s tremendous amount of stopping power. This decision to continue using 10mm Auto weapons was influenced by the now late Marine Corps Lieutenant Colonel Jeff Cooper, founder of Gunsite Academy and the “modern technique of the pistol”, who stated that the 10mm Auto was the most effective defensive ammunition available for handguns. 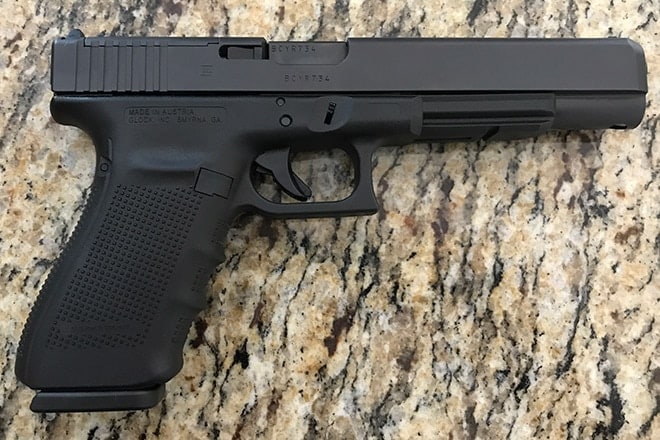 Upon learning the history behind the 10mm Auto, I decided to purchase a Glock 40 pistol.

I based my decision to purchase this pistol on the fact that I needed an effective home defense gun (in addition to my conceal carry gun – a M&P 9 Shield) that I could also use for hunting, as well as for Glock Shooting Sports Foundation competitions, both indoor and outdoor. I felt the Glock 40 would be the most accurate of Glock’s 10mm Auto pistols due to its relatively long barrel length of six inches. After purchasing the pistol, I signed up for Glock’s two-day Operator Course in Smyrna, GA.

Almost a week prior to taking the course, I fired 50 rounds through my new Glock 40 at the gun range I work at in Suwanee, GA to accustom myself to the pistol. My first experience firing the Glock 40 is one I will never forget. Even though I had read about how powerful the 10mm Auto recoil is, experiencing the recoil was something completely different and I quickly realized that maintaining a strong grip and stance were paramount to operating a Glock 40. Once I had established a firm grip and stance, my shot group with the Glock 40 at 25 yards was in less than a six-inch circle on or near the bullseye of my target.

After I finished, I felt I had a good understanding of how to properly handle and operate the firearm. The Glock Operator Course that I was to take in a few days however would soon show me that there were features of this gun I still did not fully understand. 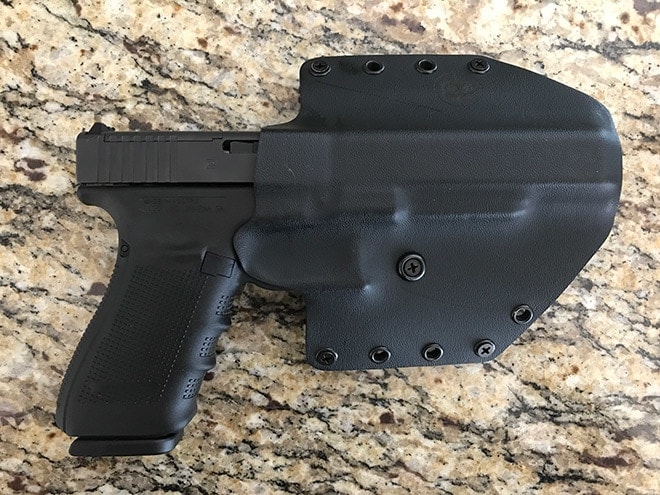 The hefty, 40 ounce loaded Glock 40 may not be suited to everyday carry, but it makes up for this in power and accuracy. (Photo: Kasev Sundar)

I took Glock’s Operator Course from May 8-9. Throughout the course, I, along with the other students taking the course, practiced several shooting techniques and exercises such as speed shooting from the holster, shooting on the move (moving forward, backward, and side-to-side), firing controlled pairs at center-mass and controlled pairs followed by head shots, distance shooting with snap-caps, firing at multiple targets, remedial actions using both arms and one arm, etc. These different exercises were conducted at distances ranging from three to 25 yards.

During the course, the instructor and almost all of the other students commented on how loud the Glock 40 was when fired and how large the recoil was. They also commented on the large muzzle blast coming from the Glock 40. The instructor and all of the other students had brought different Glock 9mm handguns to the course — I was the only individual who used a 10mm Auto handgun.

The instructor jokingly stated that the muzzle blast looked like a fireball, and he referred to my gun as a “hand cannon.” He stressed the importance of using a tactical stance when I fired the Glock 40 because when I used an Isosceles Stance, the blast and recoil of the gun kept pushing me onto me heels. My accuracy further improved upon taking his advice.

As a result of taking the Glock Operator Course, my knowledge in operating the Glock 40 vastly increased. The Glock 40 is an extremely accurate gun and extremely useful for long distance shooting situations. During distance-shooting exercises at Glock’s Operator Course, I was able to keep a tight grouping and hit the bullseye of my target with almost all of my rounds. Remember, I was firing with iron sights and not an optic. Additionally, I can corroborate Glock’s claim that the Glock 40 can be used for hunting. It truly does have a large amount of power on top of being extremely accurate.

However, the Glock 40’s large size and the power of its ammunition do carry some drawbacks.

Due to its large weight, the Glock 40 is not ideal for point shooting or speed shooting at close distances. Also, its large weight and heavy spring make attempting to fix malfunctions quickly difficult, especially if the operator is in a situation where he/she can only use one hand and therefore has to resort to using his/her belt or shoe to charge the pistol or lock the slide. Finally, as anyone with even a small amount of firearms training can deduce, the large recoil and muzzle blast of the Glock 40 make it very dangerous for novice shooters and individuals with a petite physique to operate.

Regardless — despite the disadvantages associated with the large size, recoil, and muzzle blast of the Glock 40 — those same features can actually help shooters looking to improve certain fundamentals of pistol marksmanship. These features basically force the operator to maintain a very firm grip, strong stance, an effective trigger squeeze, and a proper follow-through.

This was exactly the case with me. After firing over 500 rounds of 10mm Auto ammunition during the two-day course, I can safely say that my pistol marksmanship techniques vastly improved. In fact, the day after finishing the Glock Operator Course, I tried firing my 9mm handgun to see how it felt, and firing my 9mm handgun felt almost like firing .22 caliber pistol.

Accordingly, my recommendation to anyone interested in a Glock 40 is that I would only encourage you to one if you are an experienced shooter with a strong understanding in the basic fundamentals of pistol marksmanship. If so, the Glock 40 “hand cannon” can definitely improve your marksmanship fundamentals and long-distance shooting.