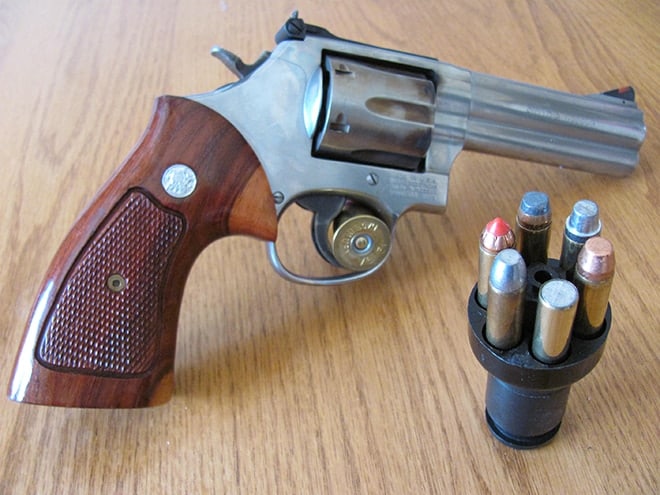 All kinds of projectiles, all kinds of uses—all of them .357. (Photo: Andy C)

The firearm hobby is a broad one, with many subdivisions of interest and activity. But for all that inherent diversity, I’ve found there’s a single cartridge that lets me cover most bases while keeping expense down and enjoyment up. I’d like to make the case that everyone who loves shooting should have a place in their safe and on their shelves for a .357 Magnum firearm and ammunition.

The .357 Magnum is probably the most widely-used revolver cartridge today, managing to thrive in an era where the wheelguns and associated cartridges are growing scarce. As most revolver cartridges fade further into obscurity every year, the .357 continues to have new life breathed into it by ammunition companies and gun manufacturers who recognize the demand for this venerable cartridge.

Getting the most from your Magnums

Let’s cut to the chase. As great as the .357 is, it doesn’t show its potential unless you start handloading it. 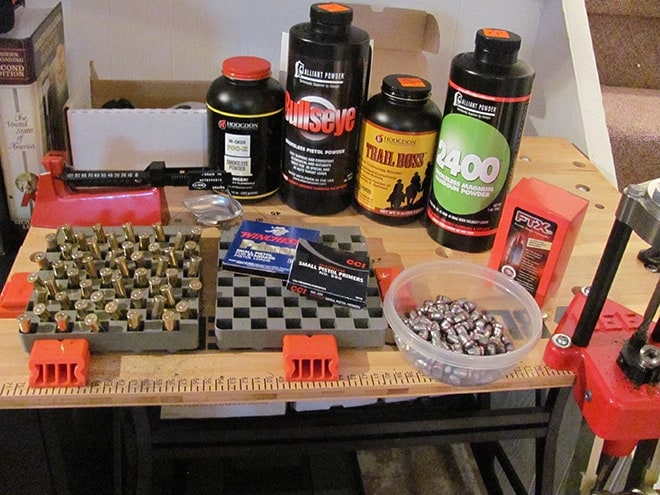 Optimal accuracy? Some manufacturers make the 148 grain hollow-based wadcutter, but they’re uncommon and expensive—and not tailored to your gun. I’ve also never loaded a factory round into my Model 13 and had it shoot to point of aim the way I want it to.

Raw power? You can get some rounds with wallop from a manufacturer—but it’ll cost you. Much cheaper to load your own. 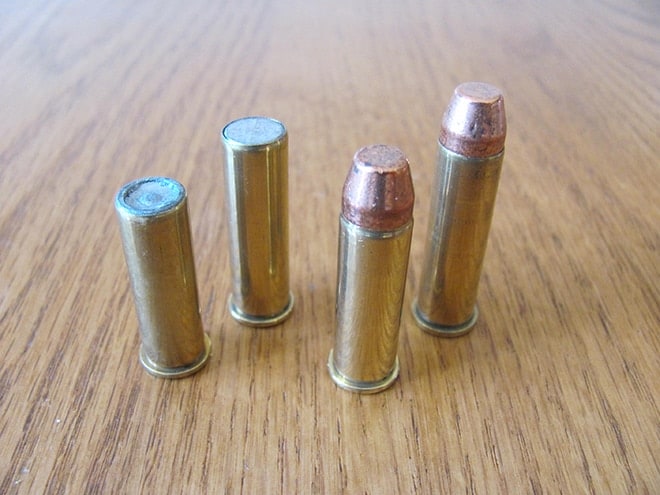 So, you’ll need a .357 magnum firearm and a reloading press to really enjoy the cartridge. If you don’t handload, fear not—the .357 is one of the easiest rounds to learn on. Big enough that components can be easily handled, small enough not to need special gear, and common enough to be inexpensive. A comprehensive used reloading setup often comes well below the price of a new gun, and if you have one, it can make your existing Magnums so diverse in function it’s like owning multiple guns.

A cartridge for all seasons

The versatility of loads for the .357 cartridge means that it excels as an all-purpose handgun round, suitable for just about every shooting activity imaginable: 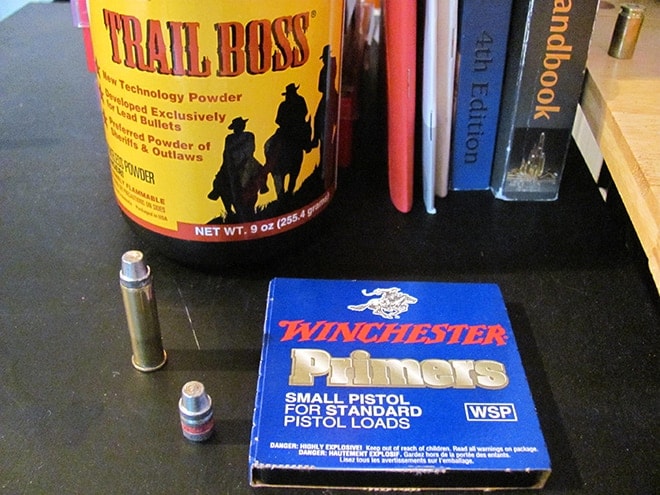 For recreational shooting, full-tilt .357 Magnum loads are pretty intense for extended sessions on both the hands and the wallet out of most revolvers. But you can download a .357 magnum to get a round that still has the powerful feel but is a little less harsh on the hands. Trail Boss is an awesome powder for loading the 158 grain semiwadcutter to moderate magnum levels, retaining good performance and fun without inducing arthritis.

If part of your plinking enjoyment is testing new handloads for flat shooting and serious speed, the .357 is a cartridge chemists’ dream. There’s a huge combination of powders, bullets, primers and guns. For pure laughs, I love a heavy charge of W231 with a 130 grain lead bullet to produce a near-dusk fireball; but more serious recipes are certainly available.

Full power .357 magnum loads out of a rifle can be fired all day with a satisfying thump and authoritative impact on reactive targets downrange. No soup can is safe. 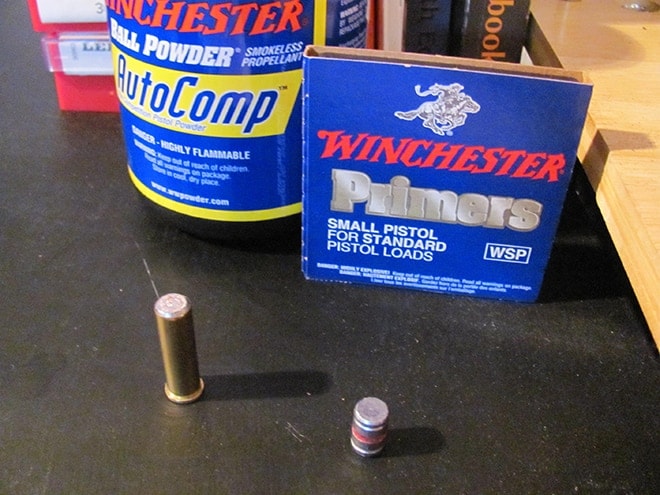 Accuracy can be greatly refined through reloading, though I would go factory for self defense. (Photo: Andy C)

Today, you can take your pick of outstanding hollowpoint or expanding-point bullets. Hand loading self-defense ammo isn’t recommended so we’ll table that, but you can load up practice rounds that can approximate your chosen self-defense loads. It’s not exact practice, but it won’t bankrupt you to shoot them weekly.

An area where the .357 Magnum is under appreciated is hunting. There’s not a whole lot under the size of a deer that can’t be taken using some .357 Magnum load. If you hunt in predominantly tight spaces with shorter sight lines, a .357 lever rifle is a wonderful gun to carry all day. 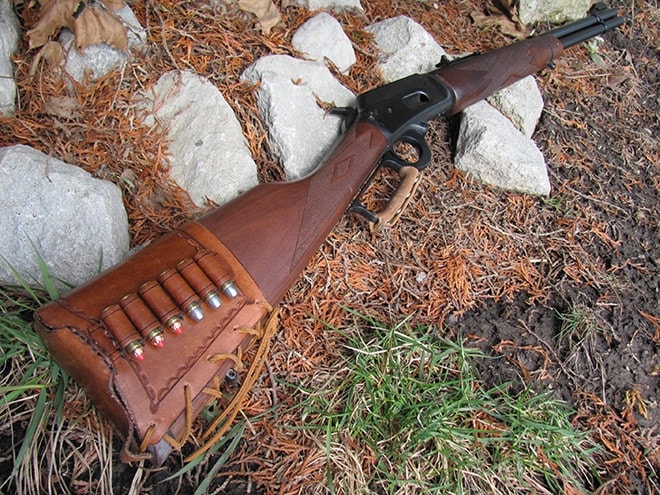 For large game, the Hornady FTX projectiles reign supreme. These are superbly accurate at distances up to 100 yards and pushed by a stout load of 2400 powder. Some people might think this is too little gun for a humane kill on a whitetail; this is misguided. A stiff .357 load is plenty of punch for a relatively delicate animal like a whitetail. The same cartridge and rifle can be used for predator control if you occasionally find the need to deal with marauding coyotes and like to keep a gun by the back door.

For smaller game, I’ve stuffed a 90-grain lead bullet into a case over a slight charge of Bullseye for a quiet, soft-shooting round that has taken many rabbits, squirrels and grouse by headshot. The bullet gets a clean kill without fragmenting. 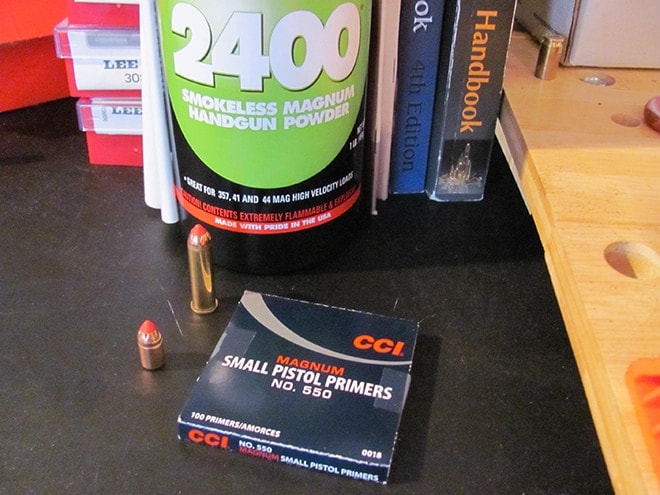 If handgun hunting is your thing, or you want to carry a revolver for protecting from four-legged predators in the wild, the FTX bullet doesn’t provide as much benefit as it does in a rifle. Instead I recommend switching your powder load to Blue Dot and loading up a 180 grain lead bullet. While these aren’t pleasant to shoot, getting mauled is worse. It’s one of the few handgun loads short of a 44 magnum that may deter a bear; it will do more than that to wolves, hogs or large cats.

While the revolver divisions of IPSC and IDPA are dwindling in participation numbers, they’re extremely rewarding to focus on. IPSC’s revolver division rules basically demand a .45 ACP moonclip gun, but in IDPA the speedloader-fed .357 magnums are alive and well. Here, I like to shoot a .357 magnum case loaded with a copper-plated 158 grain flat point projectile and a Bullseye charge calibrated to the gun to just make the power factor of 105. This is super-low recoiling, and in a relatively heavy gun like a S&W 686, you may find shorter split times than the autoloader shooters.

In Cowboy Action Shooting, 45 Colt guns are popular for authenticity’s sake, but .357 guns are more practical from a cost standpoint. In these, I like to load a 130 grain lead flat point bullet over a charge of 700X that shoots to point of aim. I don’t worry about the power factor much because CAS’ threshold is so low, it’s not worth the tiny savings in recoil against having to compensate for a two inch high point of impact. This same load is awesome in Marlin lever guns, but you might have to modify your bullet a bit depending on what you shoot; I’ve seen some Ubertis that didn’t care for the rounded flatpoint bullet profile. 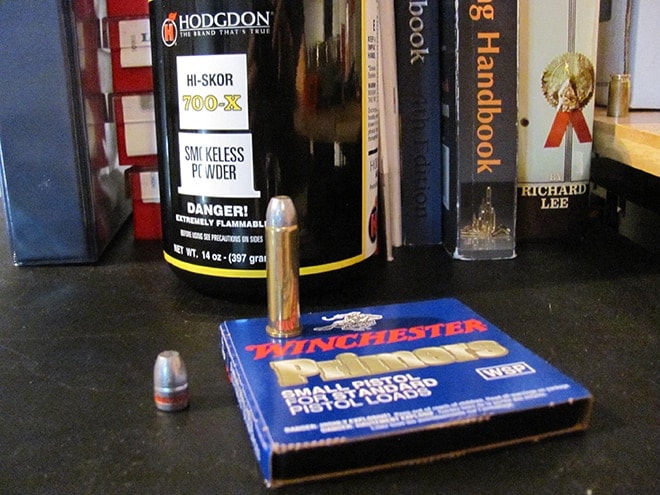 Then there’s Bullseye. The revolver has fallen out of favour in Bullseye but it still makes a great centrefire gun, and one of handgunning’s most accurate loads—the 148 grain hollow based wadcutter with Bullseye powder—saw most of it’s use here. Try this load out for yourself and after fixing up your sights, you’ll likely be impressed by the groups it can produce. I also like to load a 148 grain wadcutter with Autocomp, and find it’s superbly accurate with more thump but better range to 50 yards.

But in those three disciplines, the .357’s potential is going untapped, you could argue. Where can we push the limit of a compact but powerful cartridge for competition’s sake?

You can try bowling pin shooting or metallic silhouette. These are typically sports dominated by the 45 ACP and 44 Magnum. But if you don’t want to buy a new gun to try them out, you can get by with the .357 magnum. Both sports demand power and accuracy, so a combination of a heavy lead bullet, slow powder, and a longer barrel will be a benefit. The aforementioned 180 grain lead bullet will give you a definite advantage, especially in bowling pin shooting, while keeping the costs controllable. The difference between the 158 and 180 grain bullets on the pins is remarkable.

When I’m researching guns and I find myself in that fevered moment where I “must have” a new treasure, my most common check against excess is a simple mental test:

3) Would it be more efficient to just buy components for my .357 handloading?

Since I started doing this seriously, I’ve only bought one gun, a .308 bolt-action rifle. I’ve sold plenty of others, because they don’t see as much use.

There’s no single cartridge that can do everything, especially not with affordability in mind. But for my money no other cartridge does as much as well as the .357 magnum. It has great guns in current production, with various styles (you can even get a .357 magnum 1911!) that can be adapted to all types of activity. By focusing on using it for multiple roles, you can save a lot on organization and components, not to mention guns, and you’re not likely to miss a beat in efficiency or enjoyment.

Safety Warning: Andy C is an experienced shooter and handloader. Any information or suggestions offered in this article are intended to be put into practice only by serious shooters and handloaders with proper training and using safe reloading methods and recipes. Please read, but do not attempt anything posted here without first seeking out safe and complete instruction.