Why the MAS-36 deserves your respect 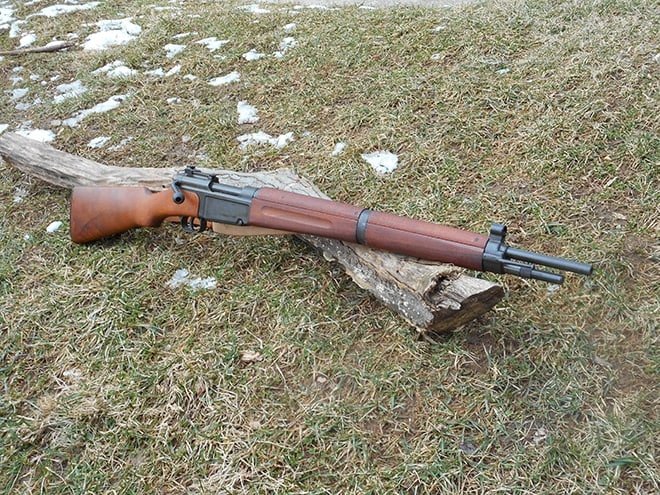 MAS-36 bolt action rifle. Not a looker or a precision weapon, but for what it was meant for, a beautifully functional firearm. (Photo: Francis Borek)

– Le Boudin (a.k.a March of the Foreign Legion)

In contrast to the countless works of art and women that come from the country of France, the MAS-36 instead follows in the tradition of French rifles: long guns that are ugly in appearance but stalwart workhorses in the field that do exactly what they are supposed to do. Many people look down on French military prowess and, as a consequence, they also tend to erroneously deride French rifles as nothing more than odd looking junk. Nothing could be further from the truth. Soldiers such as the Spahis, Zouaves, and Foreign Legionnaires have all made their mark on history and as one character in the controversial novel Devil’s Guard said: “Lions do not breed lambs! And Napoleon once held all of Europe in the grip of terror!” 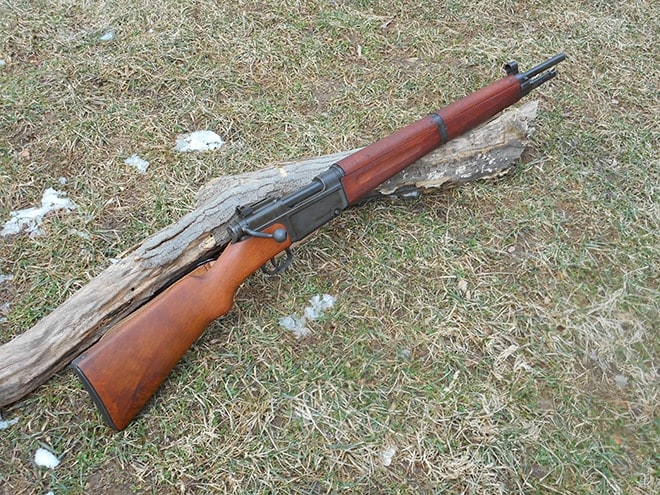 The MAS-36 was meant to be an interim rifle, but ended up in service for over a quarter century. (Photo: Francis Borek)

But first, let’s talk about the biggest elephant in the room regarding the MAS-36. As modern, educated gun owners, we are supposed to judge firearms based on how well they do their job and not by how they look. The MAS-36 won’t win any beauty contests, far from it. However there is beauty in function, and the MAS-36 tops the charts in that regard.

A two-piece stock separated by the receiver is something which has been favored by the French, appearing on the earlier Lebel and later MAS-49 rifles. Requested from the French Army, the MAS-36’s two-piece stock required less time to manufacture and was less prone to breaking. Each oddly shaped part has a reason for looking strange. The “dog-leg” bolt handle is to allow quick manipulation of the bolt and place the shooter’s hand right at the trigger. The sights are robust and resist damage. A brutal cruciform spike bayonet is stored under the barrel for when you feel the need to stab something with your rifle. These were also used as a mine-clearing probe, and were not meant to replace the French Poilu’s utility knife. Aesthetically the rifle is ugly, but functionality wise, she is gorgeous. 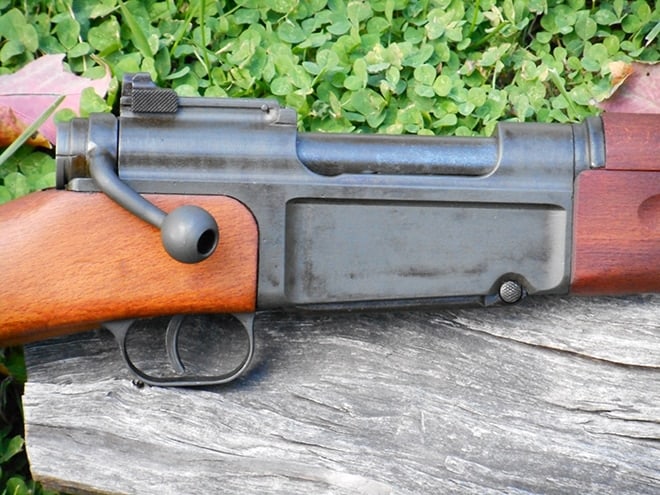 As a side note, the MAS-36 originally came from the factory with a blued finish and walnut stocks. When the rifles were refurbished after World War Two, this was replaced by a parkerized finish and European birch. The original front sight featured a pair of ears protecting the front sight blade. These too were replaced with a front sight hood. The French were very thorough in refurbishing these guns, which essentially affected every last MAS-36 in their possession. Luckily, the French arsenal workers saw rifle refurbishment as a type of art-form and many MAS-36 rifles were imported into the US in like-new condition. Because of this, it can be rather difficult to find a MAS-36 that escaped some refurbishment process. 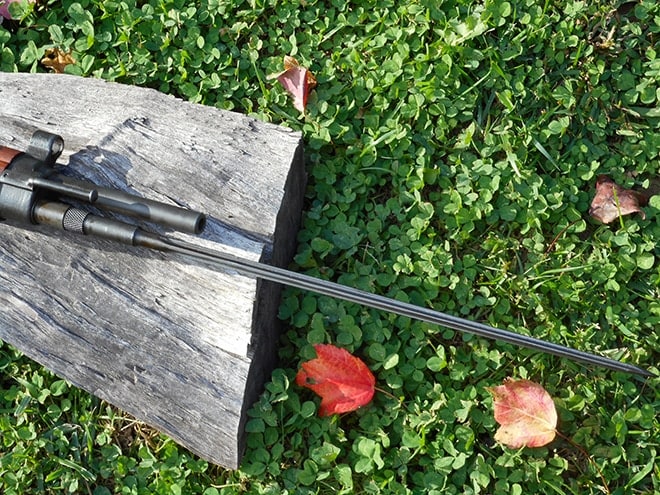 One unique feature of many French rifles is the lack of a manual safety. French leaders believed that a manual safety added a bit of mechanical complexity that could bind and jam the rifle at the most inopportune moments. French soldiers were drilled over and over again to close the bolt on an empty chamber for transport. Upon engaging the enemy, only then would they place a round in the chamber. On the range troops were drilled until it became instinct to cycle the action twice before inspecting the chamber to see if it was loaded. However due to the concerns of importers, some MAS-36 rifles were retrofitted with a safety. Not all were however, and it is common to find a MAS-36 without a safety. 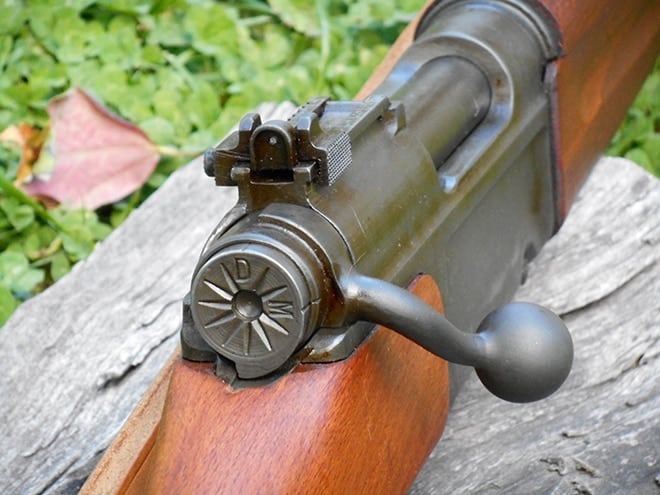 MAS-36, rear sight. Most of these rifles have been refurbished. (Photo: Francis Borek)

The French 7.5x54mm cartridge was inspired somewhat by the American .30-06 cartridge and resembles the .308 Winchester. The original military loading was dubbed ‘Balle C’ and consisted of a 139-grain bullet moving at 2,700 fps. For handloaders, the 7.5x54mm uses a .308 diameter bullet; one of the most common bullets available.

Complete disassembly of the MAS-36 requires a two prong screwdriver. The French only issued these to armorers, preventing the average soldier from disassembling their rifle. Luckily basic maintenance is simple. Depress and hold the trigger down to remove the bolt. Press down the cocking piece on the bolt and rotate from “D” (Demontage) to “M” (Montage). Remove the cocking piece and out comes the firing pin and firing pin spring. The MAS-36 bolt is quite possibly the simplest bolt you’ll ever encounter on a military rifle.

On the range the MAS-36 is decidedly average in regards to accuracy. That’s not a bad thing for a military rifle expected to arm thousands of conscripts, but it is if you value accuracy and precision above all else. The trigger is a typical two-stage affair seen on many military bolt action rifles. Though very heavy, the break was actually crisp and felt to be around 9 lbs. The rear sight and aperture sight are adjustable for elevation from 200-1000 meters. The aperture can only be adjusted for windage by replacing it with one that compensates for the correct windage adjustment. The large, fat front sight inhibits precise shooting, but 5-round groups with factory PPU ammunition came in at around 3 inches at 100 yards. Not spectacular, but par for the course when dealing with old military rifles. Remember that accuracy standards were lax for many military rifles, and most countries were perfectly fine if the rifle grouped minute-of-man at 300 yards.

So what is the MAS-36? Aesthetically it’s not the most attractive rifle out there. As I said before however: there is beauty in function. The MAS-36 simply works, and does the job it was intended to do. She was expected to only be an interim rifle, built on machinery that could be used to build anticipated self-loading rifles. Instead this odd-looking piece of steel and wood served with the French military from 1936-1960 and fought in brutal conflicts all across the globe.  This combat history earned the respect of all those who used her. 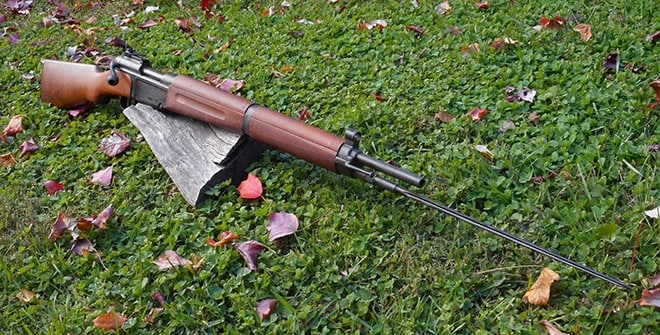 The MAS-36 has risen in price recently, indicating a new appreciation for these guns. (Photo: Francis Borek)

There was once a time where you could find a MAS-36 new in arsenal wrapping paper for $200 or used for $150. These days $325-$350 is average for both new and used MAS-36 rifles and it would seem that the average American shooter is discovering a newfound level of respect for the old French warhorse. While that respect may have caused a rise in price, it’s good to know the MAS-36 is finally getting the recognition she deserves.