The Laugo Arms Alien pistol has been turning heads since it was first shown to the public. I remember working through the crowd at SHOT Show to get my hands on it. I was impressed by the design, and I still am today. The odd shapes and lines are combined with some of the most familiar and comfortable pistol features that many of us crave. Today, we’ll take a closer look at this Xenomorphic Czech wonder.


Laugo Arms got its start working with Česká zbrojovka (CZ) on the Scorpion EVO. The stated focus at Laugo is to move beyond conventional designs and to innovate newer and better ideas. Their first product is the Alien pistol, which I assume was named due to its appearance and similarity to the protagonist in the 1980s horror sci-fi films of the same name. But does this odd pistol design actually deliver enhanced performance?

What is the Alien?


From a very objective look, the Alien is a semi-automatic 9mm pistol. But there is a great difference between the way the gun operates when compared to other designs. If you are a bit of a CZenofile like me, the grip and angle of the pistol will feel quite familiar. The pistol frame is actually two pieces bolted together, and the feel of the grip in my hand is a perfect match.

The texturing feels very good and allows better control of the pistol. The all-metal construction of the pistol makes it feel a bit heavier than most. At 2.4 pounds, you know you’ve got something significant in your hand. The 4.8-inch 9mm barrel is nested low in the frame, giving the Alien one of its innovative claims of the lowest bore axis available.


The full-sized pistol uses 17-round standard capacity magazines, and they are fed into the magwell by a smooth and contoured flare making reloads quick and easy. Other familiar features of the pistol you may expect are quality adjustable iron sights, including a fiber-optic front sight, and a 1913 standard Pic rail for accessories (like a flamethrower) under the front of the gun.

The features you may not know about are where it gets quite interesting. The Alien utilizes a gas-operated piston-delayed blowback system. This, combined with the extremely low bore axis, keeps the Alien more on target during recoil than traditional pistols. In addition, the iron sights or red dot optical sight (both are included) are mounted to the non-reciprocating portion of the pistol, which allows the shooter to remain focused on targeting while the Alien reloads itself. 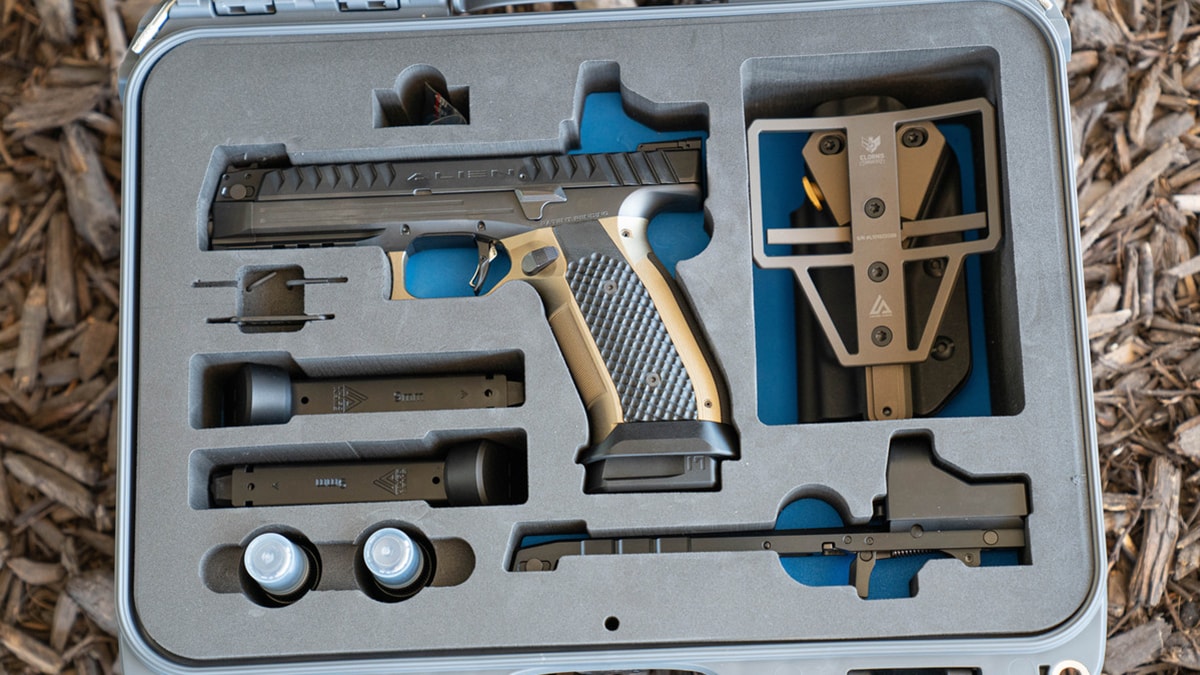 I’ve had a couple of opportunities to shoot the Alien, and I found it to be very interesting and entertaining. The pistol comes as part of a complete kit from Laugo, with a very high-quality polymer case that includes both sight rails with iron and optical sights, extra magazines, a custom holster made by Elornis Industry, and a few more extras.

After loading some magazines and feeling the pistol weight in my hand, I actually felt like I liked it more. This may not be the perfect gun to carry around on a daily basis, but it feels great to have it in the hand. The grip fills the palm of the hand perfectly for me and feels outstanding, much like the high-end pistols from CZ. The next thing up for touching was the trigger, which is again all metal and utilizes a blade safety like many modern pistols.


Pulling the trigger, there was a short take-up and a very clean break. It felt outstanding, comparable to the guns of professionals I’ve been lucky enough to shoot. The recoil of the pistol wasn’t significantly noticeable at first, I didn’t pay a lot of attention to it. But after shooting it for a while, I began to notice a different pattern. Also, while watching others shoot the gun, it certainly seemed to have less muzzle rise than comparable pistols being shot side by side and using the same ammunition.


I did notice that after much shooting, the pistol did begin to warm up perhaps a little more than I had anticipated. That’s likely due to the gas being captured in the gas block and building up heat. But it felt so good and was so smooth shooting I didn’t notice the heat for long.

With the pop of a single captured pin at the front of the pistol, the whole sighting rail came right off, and it was switched out for the rail-mounted red dot. Easily switching back and forth between the two took only seconds. The removal of the rail allowed the shooter to see the cunning inner workings of the Alien, which are much simpler than a terraforming reactor.


The hammer and sear are actually mounted in the bottom of the sight-rail and swing down instead of up. The deeply mounted barrel was under the gas block, with the piston and recoil spring assemblies positioned in the block.

The pistol shot excellent with no failures. It was as pleasant to shoot as any pistol I’ve ever shot, I could feel a desire to keep it growing inside. Accuracy from the gun was what you would expect, easily stacking shots on top of each other up close and predictably hitting targets further out.


The performance of the Alien pistol in my opinion is outstanding, but with a street price varying between $5,200 and $6,999, it certainly better perform well. Varying configurations and included accessories determine those prices. It is obviously not marketed to your average gun owner, but more towards those looking for something unique and exceptional.

I found the claims of less muzzle rise and half the recoiling angle of other pistols to be well founded, though perhaps not as significant an advantage as it’s made out to be.


The trigger is excellent, and reloads were flawless because of the angles of the magazines and the flared magwell. The slide is serrated at both the front and rear of the chamber, giving you plenty of purchase, and the sight rail gives a generous sight radius for better acquisition. The magazine release is reversible, for those left-handed shooters, but the slide release is only on the left side of the pistol.

The only downside I can find to it is the cost, which is somewhat prohibitive to many. But once you get over that part of it, it is a beautiful piece of engineering.


The interesting design and inner workings make it an artistic piece as much as a shooting tool, and perhaps it will impregnate the minds of other designers with new ideas that will mature into aggressive new firearms designs. It certainly has a “cool factor,” but its distinctive design is not just for looks.

If you like guns that incorporate more than just function but innovation and a little bit of artistry, then the Laugo Alien will likely fit right into your collection.