When you are a child, your ability to pick and choose a firearm to shoot are pretty grim, you basically get whatever adults allow you. As I remember back to my earliest shooting experiences however, I distinctly remember having an affinity for a particular rifle. My Grandfather is the source of much of my firearm affection, and as soon as I was old enough to hold a gun, Grandpa was happy to help me with one. And every time we visited Grandpa, I always asked him to get out the AR-7.

A Little Background on the AR-7 Rifle


The AR-7 came about in the late fifties from the man himself during his time at Armalite. The whole idea behind the rifle was to have a compact takedown rifle that could be easily stowed in aircraft or vehicles for use as an emergency survival weapon. It is a blow-back operated semi-automatic rifle that uses detachable 8-round box magazines. The peculiar look of the rifle is due to its core-design to be taken down to a very compact 16-inches.


The action, barrel and spare magazines are stored inside the polymer buttstock when the rubberized rear cap is removed. The rifle is assembled by attaching the action to the stock with a captured thumbscrew, the barrel is then seated in the action indexed with a pin, and a barrel nut holds the ensemble together. The simple design was meant to be functional, more than beautiful.

As a child, I killed a lot of cans with Grandpa’s AR-7, though I believe my love for the rifle had more to do with the semi-auto feature than anything else.


It’s not often that you nearly miss a whole gun because the box is so small, but that nearly happened with the AR-7. The boys in the warehouse nearly tossed it out with empty boxes because “there’s no way there’s a rifle in there.” But as I opened the box, I saw that old familiar shape that I always looked for at Grandpa’s house.

In less than a minute I pulled the rifle out of the stock and had it assembled, much to the surprise of the young fellows behind the counter who had never seen such a thing. Just as I remembered, the rifle was easy, light, and ugly as can be. The design of the rifle and its compact stowage impede the practical use of a rifle scope, though it does have a rimfire sized mounting rail. But for a survival rifle like this I suppose I could make an exception for once and go without a riflescope.

Can it Hold Up For Survival?


In perhaps a foolish decision, I decided to put the rifle to an actual test of its stated purpose. I decided I would take it into the cold and snow-covered Rocky Mountains, to see if the rifle could prove itself as an actual survival weapon. A .22LR is not exactly the best option in my opinion, but plenty of folks have used it to harvest game over the decades.


With a few snacks and a water bottle in my bag, and an odd-looking bulge in the side of my backpack, I headed into the white frosted mountains near my home. Since it’s in between major hunting seasons right now the options were limited, of course in a real life survival situation I could go after whatever I please, but for now I still need to abide by the law.

I’ve never tried coyotes or raccoons; it would surely have to be a survival situation for me to start with them. So, all that left me for table fare would be a very small assortment of rabbits, hares, possibly a squirrel if I could find one mad enough to brave this cold. Either way I would be cooking my prize over a fire improvised from whatever dry wood I could find.

First Feels in the Field 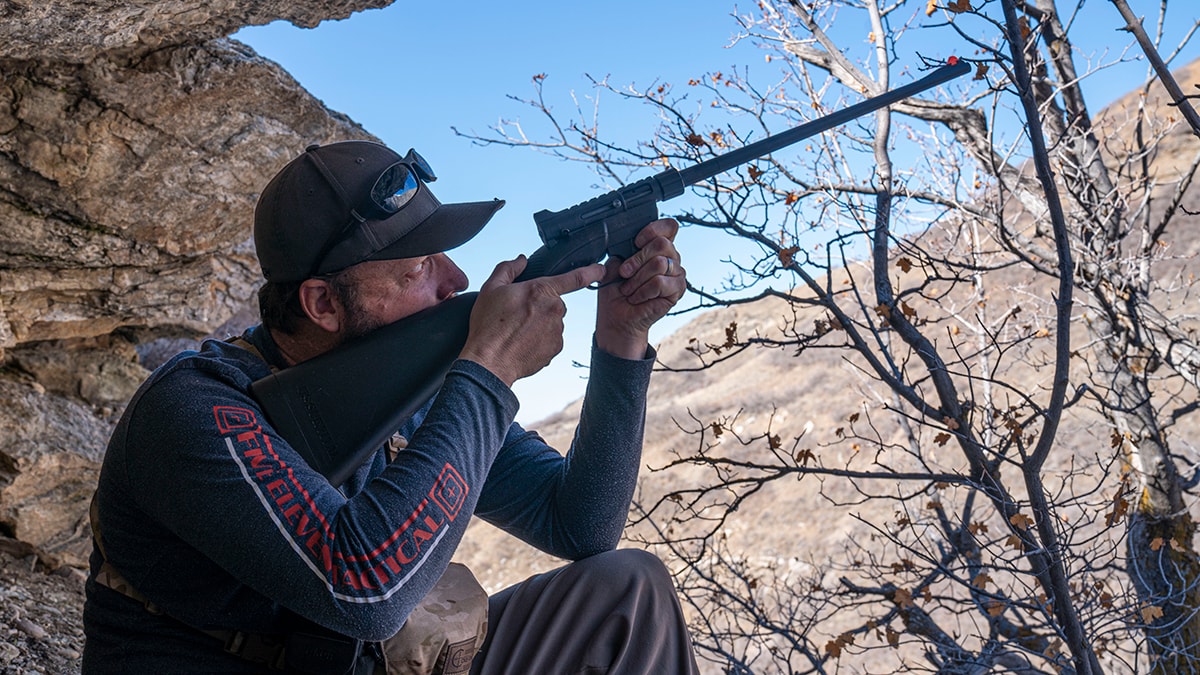 Before I got too far into this survival trip, I figured I’d better get proficient with the rifle that my life depended on. Since this wasn’t a traditional survival episode, I figured I could carry a bunch of extra ammo to practice with. Using pinecones on a fallen pine tree as a target, I tested my aim using the rear peep-sight on the AR-7. After a magazine or two I felt I had the hold figured out.

I was actually quite surprised at how repeatable the shots were with the little AR-7, even at one-hundred yards, repeatedly hitting grapefruit sized targets was not that hard. Though there was a concern in my mind about a shift in impact should I disassemble the rifle and risk having to start all over. But overall, I felt that most any small game animal inside forty to fifty yards could end up on a stick over my fire.


The controls of the AR-7 are extremely simple and intuitive. There is a lever safety on the right-side rear of the receiver, and the magazine release is tucked into the side of the trigger guard. The magazines themselves slide neatly into the magwell just in front of the triggerguard and they double as a feed-ramp, good ones apparently as I saw no malfunctions in shooting the rifle.

The charging handle sticks out the side of the receiver, it collapses into the bolt for storage. I wasn’t sure if it had some kind of retainer that keeps it extended or collapsed, but it was a tiny inconvenience to pull out the charging handle every ten or so rounds.


After familiarizing myself once again with the rifle, I continued my trek into the wilderness. I found a shelter that was akin to a cave. It did provide good shelter from any rain or snow that might fall, and it gave me a place to build a fire and keep wood dry. There I left most of my gear and set off to find a meal. The river nearby provided plenty of water should I need it, but for this exercise I figured I’d forgo the unsavory stomach cramps that come with it and bring my own. I knew if I walked long enough, I would find a rabbit or squirrel, and sure enough I managed to spot one sneaking through the brush.


A good-sized boar squirrel enjoying the warming sunshine. I cautiously followed him hoping to spot him motionless among the vegetation and rocks. The gun was already halfway up, so I shouldered it and focused the front sight on him as he paused. I pulled the trigger, a couple times, and my prize came rolling down the steep embankment towards me. With all the confidence of a starving castaway, I walked up to my treasure and soon to be meal and smiled.

I placed the squirrel into my pack and continued my search for another, one squirrel wasn’t going to keep me going for long. Another squirrel also made the mistake of sunning himself too long, and after collecting him I cleaned the two of them and washed up in some snow.


The little AR-7 had provided me with a meal, just as I had hoped. All that was left was making it edible. I had brought along some foil with butter and squirrel helper tucked inside. Into the foil they went, and I set them on the coals of my fire to cook.


It’s no wonder that after sixty years the AR7 continues to fill a very specific little niche in the survival firearms market. I’m not sure what generation the one my grandfather had come from, but they can’t have changed much. And as far as I can tell, there’s not much need to change.


The rifle is exactly what it claims to be, a simple, compact and easy to use survival tool. Whether you choose to use it as such, or just as a simple range toy that fits under your back seat, the AR-7 is a solid buy. And as my day of survival comes to an end, tucked into my rock overhang listening to the fire sputter as I gnaw tasty squirrel meat from the bone, I am glad I got to revisit this little rifle again.