Some guns are absolute gems in the eyes of the original owner, but that doesn’t always translate to every other gun owner out there. Don’t get us wrong, we can appreciate a diamond in the rough – even some rough diamonds – but there are guns that do require a bit of a squinted eye to fall in love with them.

So, as an organization that happens to get quite a few guns sent to use every day, here are some of the best and most interesting guns to recently come past the gun workbench.

These guns were customized by the previous owners. Without knowing exactly why, it’s a bit hard to be overly judgy…even if some are not on our personal wish list. First up is this custom Maverick 88 that is in very good condition.

The Maverick 88 is generally known as a pretty good shotgun, commonly referred to as the “working man’s shotgun.” It’s affordable and reliable at the same time. The pump on this one is a custom addition, and the gun also boasts a clip-on fiber-optic front sight. The firearm also takes detachable magazines, so it naturally comes with a 10-round stick magazine that is about the size of an old radio. High-volume shooting was clearly on the agenda because the gun comes with six additional five-round mags and two 10-round drum magazines.

We’ll call this a highly customized Glock 17 that boasts a uniquely ported slide and custom copper-coated barrel and grip stippling. It also hosts an extended magazine release, upgraded trigger, and metal guide rod. The most obvious feature is the sheer amount of mass that has been milled out of the slide, but there is also a DIY stipple job that gives it a very aggressive texture.

The Glock 17 is a renowned pistol that has served militaries and law enforcement agencies around the globe, and there are plenty of quality used ones on the market. We’re not 100-percent sure what is going on with the cut in the slide, but the actual machining and custom work is worth noting. Someone put a lot of love and thought into this pistol, and there’s a lot to like about the gun beyond just the looks. Hey, if you like aggressive grip texture, it’s at least worth checking out.

OK, fine, this used FN M16 might actually be one of our favorites, but it is a non-select fire. It is patterned off the M16A4 – it even says “M16” on the receiver – but it’s civilian legal without the burst-fire function. It does, however, host quite a few extras that were standard on service-issued guns.

There’s a Knight’s Armament quad rail and foregrip, which are fantastic as a side note. It also has a sling, affectionately knowns as a diaper sling because of how it wraps around the butt of the gun. It’s fine to giggle, but they do work. The real cherry on this ice cream is the Trijicon ACOG tritium, fiber-optic site. That 4x32 optic is one of the most respected combat optics on any rifle ever. 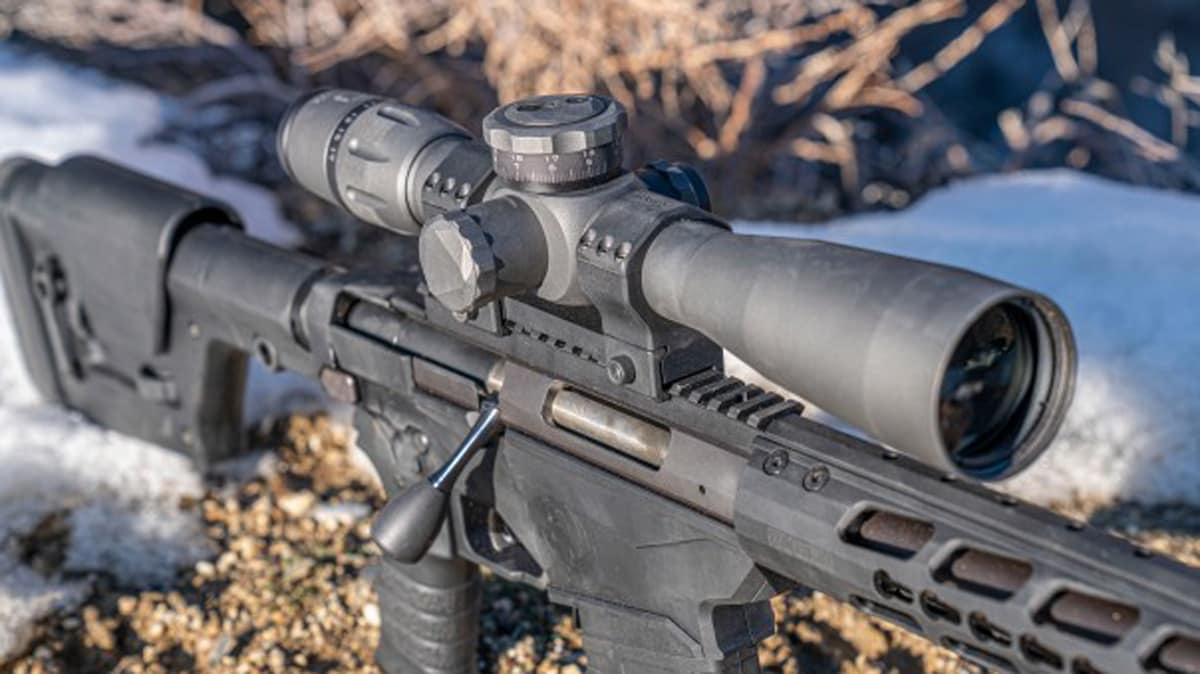 The previous owner did not skimp on those. The gun has an Atlas bipod with a good traverse, and the Vortex Razor HD 4.5-27x56 optic is a very nice scope for this rifle. Heavy-duty scope rings hold the optic to the rifle, and the entire rig offers robust performance. The gun even has a folding stock, and it’s ready to start punching holes in targets right out of the box.

Used guns generally come at a nice price point, but they often come with all the extras the previous owner invested in the firearm. So, taking the gun from the box to the range can spare you the trouble of customizing the gun on your own. These customs run the gamut from guns we loved the second we saw them to ones that might grow on you over time. Take a look at some more used guns to see if one happens to fit all your needs.