Marine special operators are in the market for a new, off the shelf .45 caliber semiautomatic and, in the American spirit, the competition for the contract has begun to heat up with at least three companies submitting prototypes and many others withdrawing their bids.

Company representatives from Connecticut’s Colt and Illinois’ Springfield Armory told us at the SHOT Show that they have sent samples of their latest 1911 inspired handguns to acquisition officers earlier this year and the United States Marine Corps Special Operations Command (MARSOC) is expected to review proposals from the entire defense industry soon.

Currently, Force Reconnaissance units use the M45 Close Quarter Battle Pistol.  Modeled after earlier versions of the semi-automatic 1911 pistol they’ve used something in this vein, like the MEU (SOC) pistol (short for Marine Expeditionary Unit Special Operations Capable), since the 80s and, for years, experts, have hand-assembled their own .45 caliber 1911s at the Marine Corps Base in Quantico, Virginia.  Concurrent with the search for an assembly line option, The Corps could also buy between 400 and 12,000 M45s components as part of a contract revealed in November worth up to $22.5 million.

The Corp has also cited swelling ranks as the impetus for a defense industry handgun, which more than likely will come from the 1911 family (The Corp would like the new guns to fit their existing 45 magazines).  Greg Rozon, a development engineer at Colt, reported that the gunmaker tweaked their 01070RG rail gun pistol and provided Quantico with 10 prototypes in the fall.

What tweaks?  The 01070RG rail gun sports a shiny stainless steel finish and classy rosewood grips. Colt’s prototypes are finished with a desert-color Cercoat that mitigates glare on the weapon.  There’s more stainless steel in the guts as will to reduce corrosion. Possibly the sexiest addition however is it also comes equipped with a tritium (which is radioactive hydrogen) powered night sight made by Novak.

Springfield Armory put up six re-imaginations of their PX9105ML pistol. The company calls it the Full-Sized MC Operator.   MC stands for Marine Corp (not Master of Ceremonies).  The pistol has a black slide with a green chassis and it also includes a radioactive tritium night sights.  The Corps also has bought Springfield Armory 1911 slides in the past to use on pistols assembled at Quantico. 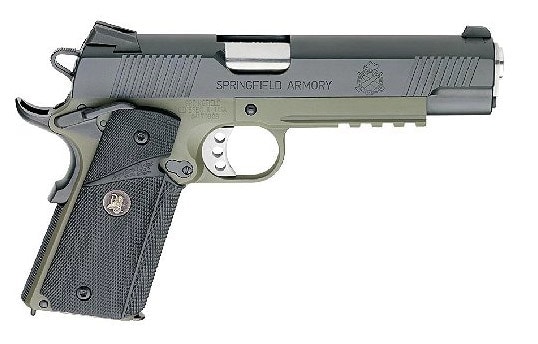 The third and decidedly dark horse contender as of now is Karl Lippard Designs of Colorado Springs, Colorado.  They tendered a proposal to adopt their New Generation Model 1911 A2 pistol.  They claim, astonishingly, this pistol is capable of accurately engaging targets beyond 400 yards.