Indian soldiers are getting a new rifle.  It’s a big country and a lot of people are talking about it.

India’s military has a lot of people to worry about, and many of them live inside India, not to discount foreign threats.  However, their armament’s pretty tired.  After the Indo-Pakistan war of ’47, the Indian Armed Forces began to officially outfit themselves with AKs.  Their first AKs in service were Polish, supplied by the Soviet Union, to which they later added East German AKs (MPiKMs) and Russian AKMs, then Romanian PMs, Bulgarian ARs, and so on.

Currently, their armorers equip outfits with, well, whatever the Hell they can get their hands on. 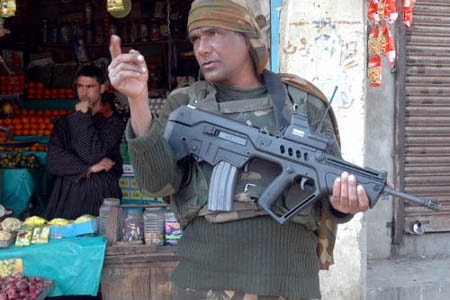 caption: Do not fuck with my lamb madras.

But now the IAF is looking to replace their soldiers’ aging AK pattern rifles, and there is only one Indian armory, to the best of our knowledge, that manufactures AKs.  Uniformity issues aside, this is a real blow to national pride.  The Indian military is the third-largest in the world (1.3M active, 2.1M including reservists) and they, for a large part, use old and second-hand weapons. 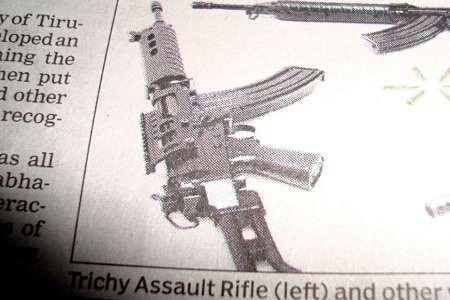 So the announcement that the IAF was to get all Indian-made assault rifles is a mixed bag, mostly because of that photo.  While on the one hand, many Indians are happy to hear that these guns are getting made in their Tamil hometown of Tiruchirappall, that’s another damn AK.

India wishes very much to become the modern power that they can be, and has plans, starting next year and finishing by 2020, to have a cutting-edge military, so the sight of a decades-old piece of iron designed in another country being fashioned with a rail and stamped “Made in India” leaves a bitter taste.

But it’s a good middle step.  If it helps, that’s not an AK, in all probability it’s an FN-FAL Para modified to take AK magazines and shoot AK ammo. 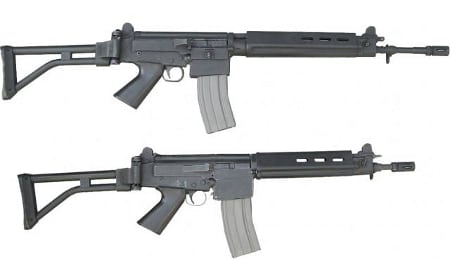 They’ve changed the forearm and the sights, maybe cut down the barrel, and that folding stock doesn’t look… right, but the rivets are in the correct places and the grip and trigger guard looks identical.  Oh and they added a tactical rail, you have to add one of those.

This will go a long way to shore up their flagging arms and standardize without losing the use of all those magazines and bullets.  Plus, they can share parts with other FALs, which are in no short supply anywhere on this planet, and by all accounts they’re not taking a step in any less-reliable directions. 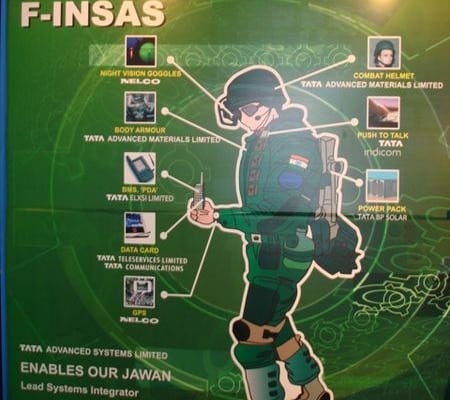 Interchangeability with both 5.56 and 7.62×51 FALs is a good thing, since not only does India have a more than a few of those, they’re looking to shoot five different calibers (5.56×45, 7.63×39, 7.62×51, 6.8 SPC, 6.5 Grendel) with a single, standardized modular rifle down the road. If in the meantime they only have one pattern of rifle that fires three of those calibers they’re well on their way.

By 2020 India will be a whole lot closer to issuing the full F-INSAS kit, but this is still necessary. And of course, if the guys in Trichy decide to make a semi-automatic FAL that accepts AK magazines, I can’t help but think there’s a market for that sort of thing overseas… 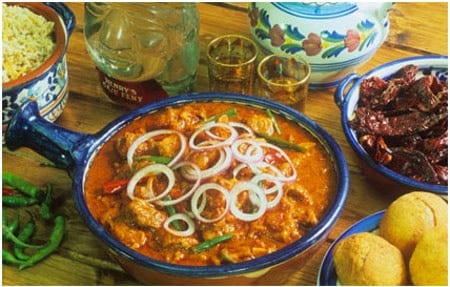 caption: You can look.  You cannot touch.