The Blunderful History of How the Blunderbuss Got Its Name

Do you ever wonder where some words come from? Well, I do, and when I thought about the ancient blunderbuss, what some believe was the genesis for our modern shotguns, I wondered what the name meant. After doing some simple research, I found out that the name was originally derived from the Dutch, actually from the Dutch word donderbus. It is a combination of the word donder, meaning “thunder”, and buss, meaning “pipe”, or, in some translations, “box”.

Donder was pretty much arbitrarily changed to blunder, because, blunder means “to confuse” (something that usually happened when one went off) and sounded a lot like donder and thunder. Some maintain that “blunder” replaced donder because the device was so simple to fire that even a “blundering fool” could use it effectively, though there is little in the way of evidence supporting this story as part of the actual etymology of the word.  So, in literal terms, the device was something of a pipe that made a stunningly loud report, causing confusion in the minds of the folks at the receiving end of the weapon. I hope this all makes sense now because it’s a long walk to get to “gun” but you have to understand, gun was a pretty new concept at the time.

It was also referred to as a “dragon” (not dragon gun mind you, just dragon), simply because of the ornate dragon design carvings that adorned many of the early versions of the blunderbuss. The mythical dragon’s head was on the barrel, and the muzzle blast would give the distinct impression of a fire-breathing dragon.

The blunderbuss became a popular weapon way back in the early 1700s. It was used for close-quarter fighting, due to its ease of maneuverability, because of its relatively small size, and its ability to deliver an ear-shattering blast of lead buck or shot, or even a small lead ball, about the size of a large marble all the way up to a ping-pong ball. Indeed in terms of artillery of the day, its 15 inch barrel, portable 30.5 inch overall length and hole punching .69 caliber round were pretty much unmatched for those close-in battles. It was used by army and naval forces, with various versions of the weapon being manufactured all the way through to the 1840s. George Washington even thought that the blunderbuss would be a good alternative weapon to the carbine for use by our Continental Dragoon forces.

At various times, these unusual weapons sported both steel and brass barrels. In the naval versions of the gun, the steel barrels were japanned, or blackened, in order to avoid the inevitable corrosive damage caused by the salt air. They were the preferred weapon of the time, and were found to be particularly effective in repealing enemy boarding parties, and for all close-in armed combat. The early American colonies even used the blunderbuss on a daily basis for guarding their rudimentary forts, for actual combat operations against indigenous natives and, incredibly, in some experimental attempts at hunting wildlife. 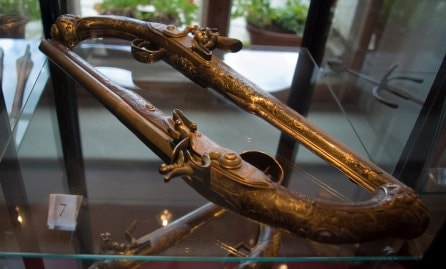 By the late 18th century, the blunderbuss found favor among coachmen and our very own early colonial stagecoach drivers took to almost exclusively using the gun for defense, starting in New England in 1744.  However, hands down its most recognizable home is in the hands of pirates, a symptom of years of Hollywood romanticizing. 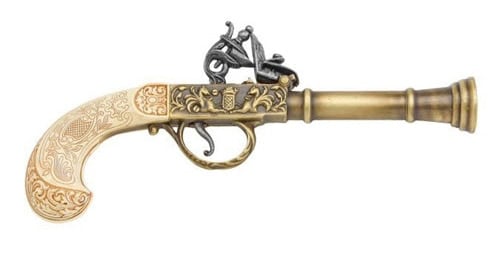 The blunderbuss can still be found in antique stores and estate sales, and every once in awhile they show up in gun shops, the product of a trade-in. Considering the long history of the weapon, one would imagine that an authentic blunderbuss would fetch a sizable amount of money, but for some reason the opposite is true. They can still be purchased occasionally for just a few hundred dollars. That is, of course, unless it’s a very early version, or one with the dragon design on it. Then the numbers start to increase pretty dramatically. My good Canadian friend mentioned recently that he was waiting for the go-ahead from the war department, so that he could buy one he found in an antique store up there, and that he would have his answer just as soon as she got off of work. I haven’t heard anything about his blunderbuss find since six weeks ago!

Interestingly enough, there are a number of blunderbuss clubs and associations across the globe, many of which are in Europe, where the gun played a significant role in early weaponry. Here in the United States, most of the organizations we could loosely associate with this particular weapon, are black powder clubs, or shotgun events. And speaking of the shotgun, it doesn’t take a whole lot of imagination to figure out where that word came from. Lets see, there shot, and gun, so, yes, I got it!