I stopped at the hotel desk, asked for my mail. The clerk handed me a small padded envelope.

I smiled. It had been too long.

Sitting down in the lobby, I opened the envelope. An iPod Nano with attached earbuds fell into my hand. I positioned the earbuds, turned it on. 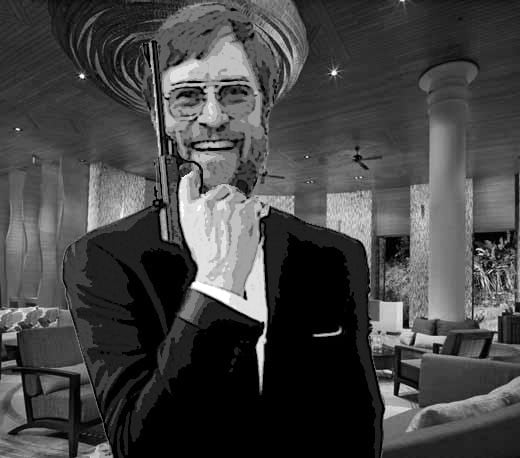 “Good morning, Mr. Downey. This is a Stinger Pen Pistol…”

I saw the image flash on the small iPod screen.

“…which gun-control activists sought to ban some years ago, because of the extreme danger that they claimed it posed. They called it an “Assassin’s Gun” and said that it was a threat to national security. The gun, which needs to be folded from its initial pen shape into something resembling a pistol, was classified by the BATF in the early 1990’s as a conventional pistol, is based on designs by R. J. Braverman.” 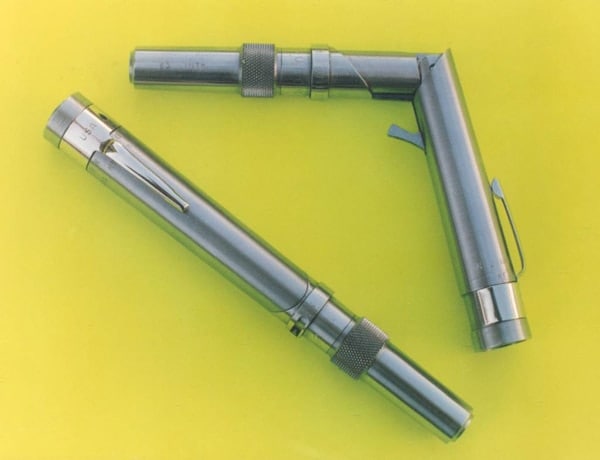 I hit ‘pause’ to study the image.

“While these guns are occasionally available, little more than anecdotal information exists about their performance. We have obtained a sample in .22 caliber, and would like it tested. As always, should you or any member of your BBTI team be caught or killed, the Editor will disavow all knowledge of your actions.  This iPod will self destruct in five seconds.  Good luck, Jim!” 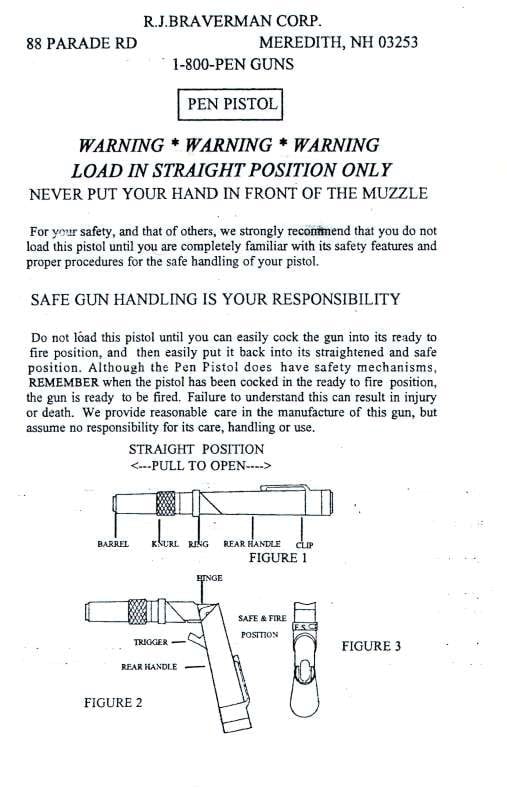 Well, this past weekend we did do a bunch of BBTI testing, this time of .22 caliber ammo and guns, something people have been asking about since we first put up our site. We tested ten different types of common .22 caliber ammunition, from little 27 grain shorts to 60 grain subsonic rounds. We used a modified Thompson/Center Hotshot, which had been converted to a pistol with the fore-arm removed. Here’s a picture of Keith with the barrel already cut down to about 8″ length: 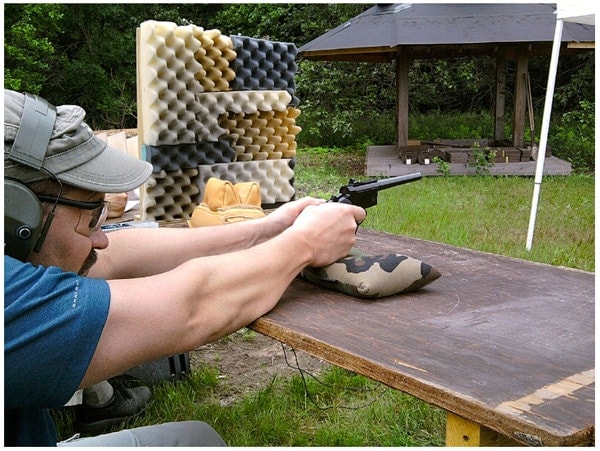 Here’s a pic of the various ‘real world’ guns we also tested with the same ammunition: 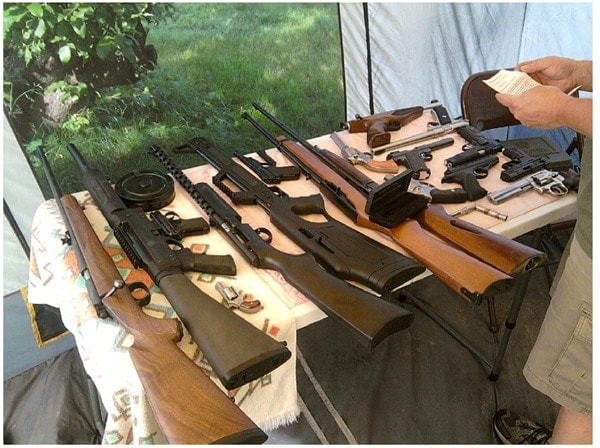 If you look on the lower right of that second image, you’ll see an already folded Stinger Pen Gun. Yeah, we really did test it. Here you can see: 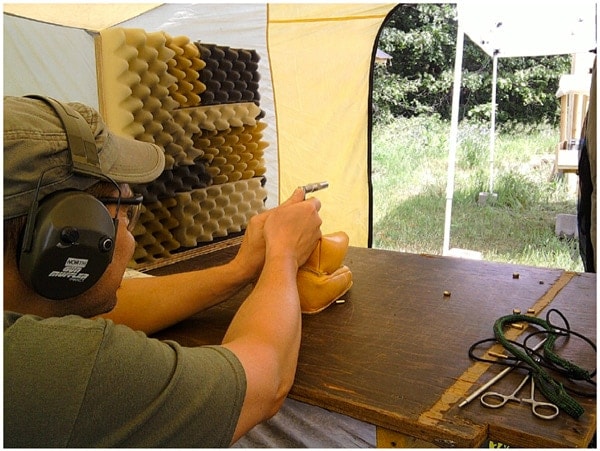 How did it do?

Well, the ballistic performance was in line with other very short barreled guns (the Stinger has a nominal 2″ barrel, but that also includes the length of the cartridge), with velocities ranging from a high of about 975 f.p.s. from CCI Stingers (32 grain bullet) to just 630 f.p.s. from the Aguila SSS (60 grain bullet).

Accuracy was better than I expected. Keith did the test shooting, and was able to get good readings for all the test ammo – meaning that he had to place shots over the chronographs, which were 15-feet away. Shooting it myself, I’d say that with a little practice, the effective range for most people is something close to that – you should be able to hit a human torso at a distance of 3-5 yards fairly reliably. 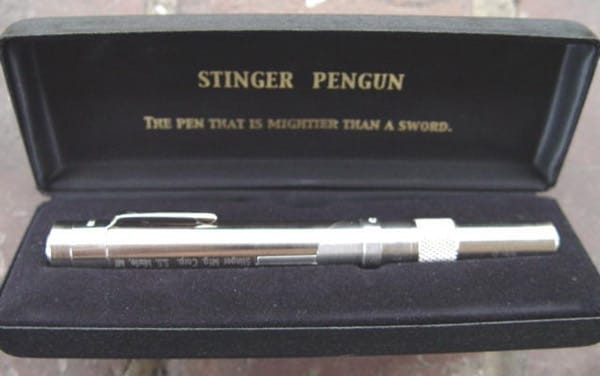 The gun needs to be cocked (done by pulling the handle portion down from the barrel, then straightening, then folded back into the shooting configuration) after each firing. You also need to manually unscrew the barrel from the body, pop out the spent casing, then insert a new cartridge and screw the barrel back into place. A tricky little ‘ring’ safety has to be in the right position as well. And to fire the gun, the trigger has to be pushed UP towards the barrel, rather than pulled back like on just about every other gun I have ever shot. It is very counter-intuitive.

Recoil isn’t bad at all. The whole thing is made out of stainless steel, so it has some heft to it. The quality is quite good, and I would imagine that it would probably last for many years with just minimal maintenance. The test gun we obtained did have some staining on the outside of the housing, just from being stored in the original packaging in a damp environment.

Is it really an “Assassin’s Gun” or some kind of covert terror weapon? Hardly.

Yeah, you could use it to assault someone, but even a NAA mini revolver would be more effective, with about a similar amount of power and more shots quicker. Having it as a novelty or some kind of deep-cover back up gun is about the only use I can think of for it, and given that there hasn’t been a rash of murders committed with this gun in the 20 years it has been around, I’d say the threat is pretty nominal. 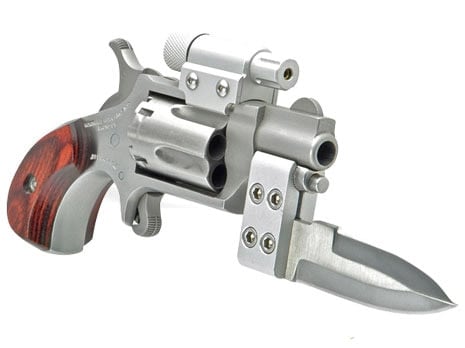 It’ll be a few weeks before we have the data from these tests crunched and posted – I’ll keep you informed. But let me say now that you should take all velocity claims on the .22 ammunition we tested with a very big grain of salt. 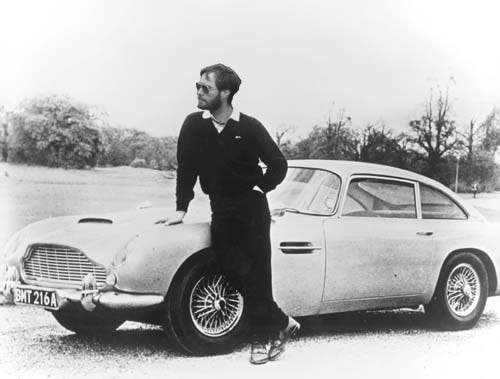