Do you remember the times you’ve seen the presidential motorcade being driven someplace? You were probably watching it on television like the rest of us. Think back to what you were actually seeing. Yes, you saw police officers on motorcycles and in patrol cars, you saw the actual armored limousine the president rides in, and, more than likely, you saw a handful of conspicuously dark and unadorned SUVs. Every time the president’s limousine stopped, you also saw a number of Secret Service agents jump out of those SUVs to quickly run up and surround the president’s vehicle. To be precise, they jumped out of all but one of those SUVs. The one they didn’t exit, the one with the very dark tinted windows, contained something you would not have seen, unless, of course, that motorcade came under attack. 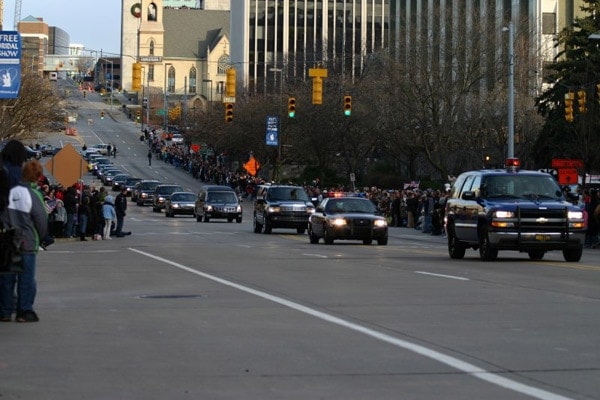 In an awful event such as that, what you would see from that lone SUV, would have looked like something out of a futuristic science fiction movie. The SUV’s roof would have opened up, and a weapon would instantly be raised up through that open space, a weapon of such awesome capability, that all who fell before the weapon would have hardly known what had hit them. You would be watching an agent at the trigger end of the Dillon M134D Gatling Gun. 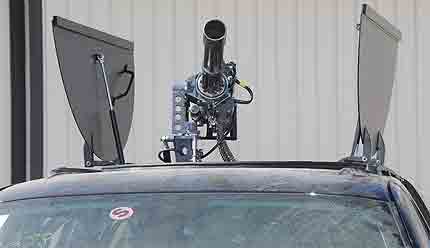 The M134D is probably the very finest small caliber, defense-suppression weapon in the world. It is an electrically driven, six-barreled gun, that spews out ear-shattering rounds at an incredible rate, approximately 3,000 round per minute. And that’s for a hand-operated system! When the gun is being fired, the driver of the SUV has to use the windshield wipers just to see the road ahead, as the volume of spent rounds literally covers the windshield from one side to the other. 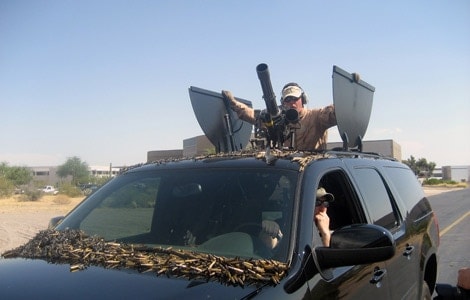 It is chambered in the 7.62mm NATO round, thus ensuring an endless supply of inexpensive bullets. The weapon is fed from either a 3,000 or a 4,400 round magazine. In the unlikely event of a stoppage, the gun can be quickly and easily serviced, and back in use in about 45 seconds. The six barrel configuration means that each barrel only experiences 500 rounds of fire per minute. This allows for continues long bursts of rapid fire.

The M134D is actually a hybrid design from Dillon, as it combines titanium and skeletonized parts, along with a steel housing. It was designed to offer the weight savings that come from the titanium, and the longer life of the steel gun. The resulting weapon is only two pounds heavier than an all-titanium design, but it has over three times the service life, something in the range of 300,000 to 1,000,000 rounds. The total weights of the actual weapons, sans the rounds, is right around the fifty-two pound mark, making the mounted version light as a feather, and easy to maneuver. 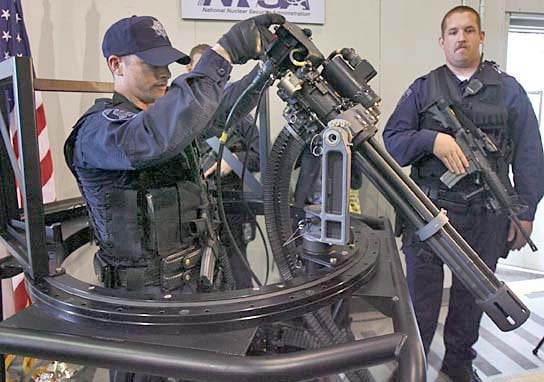 The weapon was designed by Dillon Aero, Incorporated, and has been in service in various configurations since the 1960s. The M134 initially suffered from a combination of innate design flaws, virtually no product support, and a very poor spare parts program.

The minigun was on the verge of complete retirement before Dillon began to take a serious second look at the weapon system.

The company produced the DAFD-2001 Feeder/Delinker system in the mid-1990s, and adopted the weapons platforms for the United States Military. It addressed all the serious shortcomings of the earlier model, and paved the way for the gun’s rebirth. Following the success of the DAFD-2001 model, the company systematically redesigned virtually every component of the weapon system. This led to the incredible M134D. 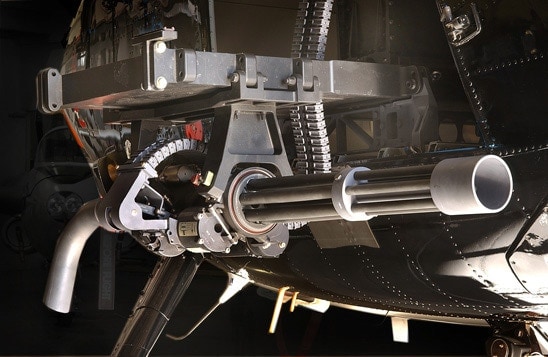 In 2003 the weapon was accepted into service by the US Army. It replaced their earlier GAU-2C. Since the turn of the century, the company’s product line has grown by leaps and bounds, and now includes the high-capacity feed systems for both the M240 and the M134D. These weapons can now be found serving in a wide variety of applications on helicopters and naval ships from a number of allied countries.

So, the very next time you see that motorcade on television, check out the dark colored SUV about two vehicles behind the president’s limousine. What waits inside is an incredible weapon system, unlike any other.