The Tools of the Trade Winds: The Guns of Blackbeard

Pirate lore has become tremendously popular, with several movies appealing to children like my eight year old grandson Glenny. At the top of his list of favorite characters is the legendary pirate known simply as Blackbeard. Well, aside from the romanticized depictions seen in films, who was Blackbeard, what type of person was he and what weapons did he use?

Blackbeard’s actual name was believed to be Edward Thatch, although there were some derivatives of the last name including Thatche, Teach and some others. He was believed to be born in Bristol, England, but some reports indicate his place of birth may have been London some time around 1680. 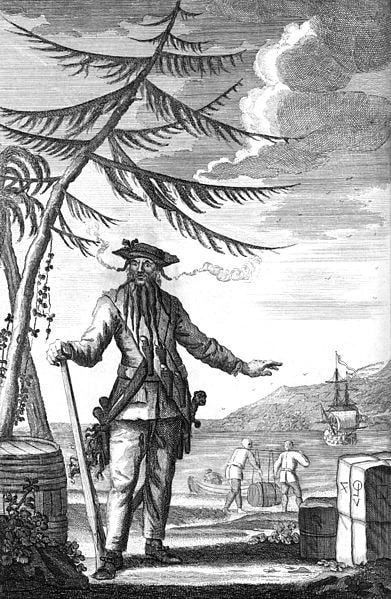 But the most appropriate place to start when attempting to flesh out the character of the man may be his master ship, the recovered contents of which are now undergoing research by archaeologists.

It turns out that the Queen Ann’s Revenge may have been the pirate’s flagship. The name he attached to the ship was in essence a nod to his prior service to the Crown of England before he turned to piracy. The ship was actually a French slave ship, the La Concorde, captured by the pirate in 1717. He transformed the ship into a fighting vessel armed with a wide assortment of mismatched weaponry including more than 40 cannons, and he used it to lead his small fleet of pirate ships as they plundered their way across the Atlantic Ocean and up and down the eastern seaboard of North America.

They even brazenly blockaded the harbor of Charleston in their search for anything of value, anything that could be stolen from ships daring to enter or depart the harbor. 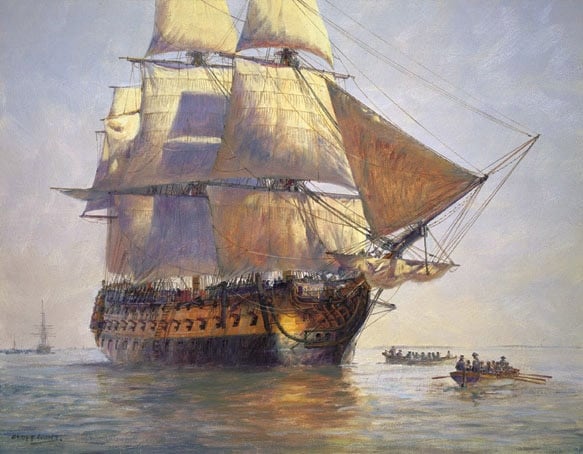 When the Queen Ann’s Revenge tried later to enter the Beaufort Inlet in North Carolina along with its sister ship the Adventure in 1718, they became stuck on a sandbar and eventually sank in about 25 feet of water. The flagship was discovered in 1997 and those recovery efforts continue to this day. 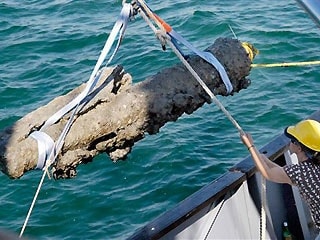 Some of the weaponry recovered thus far includes sword hilts and ammunition, handheld firearms and a variety of cannons of English and Swedish origin. They range from ½ pounders to 6-pounders, but what sets these finds apart from other similar archaeological discoveries over the years was that literally all of the weapons were fully loaded and ready to be fired. And they just weren’t loaded with standard cannon balls, but with an incredible assortment of lethal shot including broken glass, cut pieces of chain, nails and an assortment of iron pieces never intended to sink another ship, but instead intended to inflict the heaviest casualties possible and to clean the opposing crew right off their decks. This revelation may partially answer the question about what sort of person he was, because it is plainly obvious that Blackbeard was nothing if not completely ruthless. 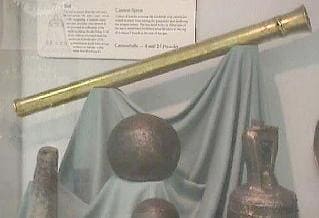 In addition to this, his ship carried several 24-pounders intended to sink enemy vessels if need be. Like the smaller cannons, these were fully loaded and ready for use. A large number of 24-pound cannon balls have been recovered from the site and they, like the rest of the weaponry, are undergoing restoration and preservation. After so many years immersed in salt water it is a long and tedious process to bring those artifacts back to life. 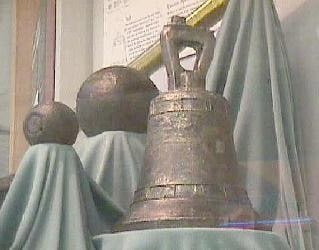 It’s a known historical fact that the man loved weapons and considered them the tools of his trade. When he went into battle he would carry no less than three pairs of cocked and primed pistols strapped across his chest and as many as four more under at least one belt at his sides. With Blackbeard one sword was never enough. In addition to the pistols, he was known to carry at least two cutlasses and several daggers. 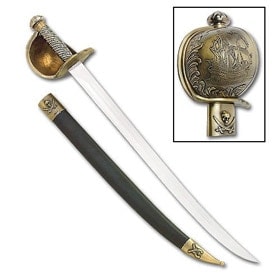 He was also known for his skill with the cutlass, and his style of fighting close-in was to swing the weapon violently back and forth across his body in a windmill fashion scaring the bejeebers out of his foe.

Blackbeard carried one blunderbuss with a 26 ½ inch short-barreled brass barrel and those aforementioned ten pistols. 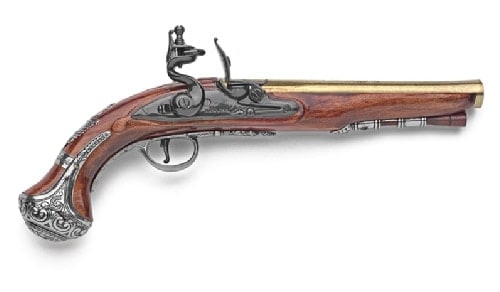 Three of the pistols he was believed to have carried and used were of French origin and believed to be 18th century French Navy flintlocks with barrel lengths of 7 3/8 inches and weighing close to 1.5 pounds. These weapons did not boast much decoration, but some historians believed that in Blackbeard’s last year of life he had one of the pistol’s wooden handle engraved with the script letters ET for his actual name of Edward Thatch or Edward Teach. If this particular weapon does indeed exist, its whereabouts have not been made public. 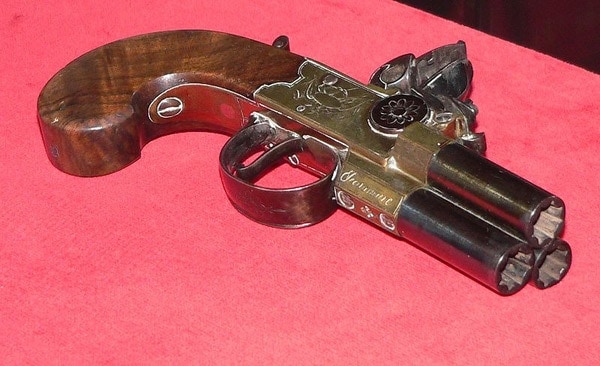 Over the course of the few short years he was engaged in piracy it was believed that he also used multi-barreled pistols, which employed varying arrangements of locks and triggers that fired through either fixed or rotating barrels. He also may have used at least one volley gun in a pistol form that fired through as many as three barrels at once, in essence clearing out a path of adversary in front him. Lastly, he was known to carry one pocket pistol, what some believe were the forerunners of the derringer pistol.

The archeological excavations of the Queen Ann’s Revenge continues to this day, with some believing that the bulk of the recoverable artifacts have already been found. The era of piracy primarily carried out in Caribbean waters began around 1560, but for the most part died out around the 1720s.

On November 22, 1718, Blackbeard was tracked down by the Royal Navy at Ocracoke Inlet, North Carolina and following a bloody fight was killed. It ended his career obviously, but also signaled the beginning of the end for large scale pirating activities in the Eastern Americas. 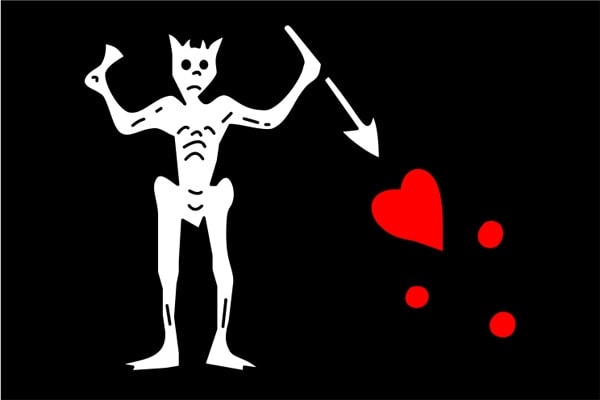