After close to a solid year of anticipation, Colt’s Mustang PocketLite .380 ACP 1911 handguns are shipping.  They’re much improved over the original Mustangs and have a very competitive MSRP.  We think they’re going to take a solid bite out of the pocket pistol market.

To be honest, the original PocketLites weren’t that great.  Twenty-five years ago, the .380 was a nothing caliber with nobody making decent bullets in it so it should come as no surprise that Colt’s design reflected that.  The Mustang of 1986 had loose tolerances, a lot of slop in the assembly, and budget cast parts.  The new Mustang is entirely CNC machined out of bar stock and locks up like a premium pocket pistol should.

The gun does leave some 1911 conventions behind it as well.  It is recoil-operated, it can still be carried cocked-and-locked, and it’s single-action only.  The controls are in the same places, but the Mustang eschews the plungers for a more modern safety and slide stop (bravo).  The safety is super-low-profile and doesn’t lock the slide in place.

It also has a bushingless barrel with an integrated locking lug.  And the trigger pivots.

All that aside, it’s priced to move with an MSRP of about $600.  As we predicted, the Colt Mustang is targeting the SIG P238, and we’re predicting now a lot of people are going to go with the Colt on name alone; they are the original manufacturer of the 1911, after all.

And they’re getting into the hands of shops and reviewers alike.  Here’s what Jeff Quinn had to say about his: 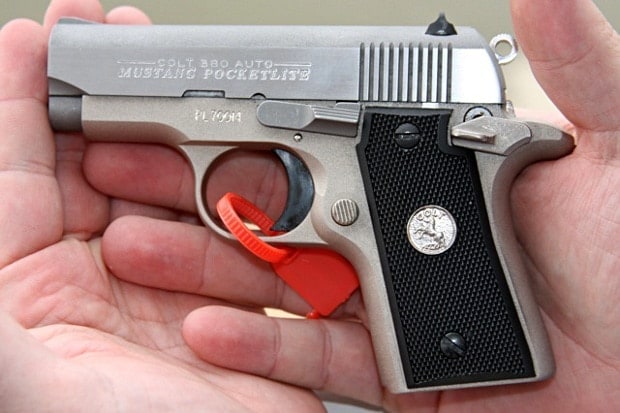 “Functioning was perfect with the little Colt. Every round of every brand fed, fired, and ejected perfectly. The empty cases were thrown clear and to the right, and thankfully, none were flung back at the shooter. The slide was fairly easy to manually operate, especially if the hammer was cocked first. Some small 380 pistols are hard to operate, but the Pocketlite slide manipulated very easily for such a pistol.

“I am glad to see the reintroduction of this dandy little pocket pistol. It has the right balance of power to portability to suit the carry needs of most who choose to go armed.”

The Mustang is holds 6+1 rounds of .380 ACP, weighs 14 ounces without a magazine, is about .8 inches wide and 5½ inches long, and 4 inches tall.  Colt’s got a product, a market, and a window: just in time for Christmas…