Thanksgiving Leftovers: The Guns of the Pilgrims

Guns.com would like to wish all of our friends, fans, family and fellow Americans a Happy belated Thanksgiving. We all had a great time with our families and are thankful that all of you are in our lives.

In November 1620, after spending just over 65-days on the open ocean, the Mayflower dropped anchor off the shores of what we today call Massachusetts.

Onboard, 130 passengers stood, anxious, to embark on adventures in a new and hostile world.  They were all bound by a pact, agreed upon on the ship, to pursue a mutually fulfilling destiny once aground—to found and govern as a civil body politic a permanent settlement in North America.

What did this mean?  It meant survive, plain and simple. Find food.  Establish a shelter.  Cloth the cold, treat the sick. Blaze paths, collect or make provisions, communicate with the native population, explore.  In short, help one another to live.  This was the crucial tie that binds, because during that first year, many of those first settlers didn’t survive.

And they did all these various things with guns in their hands, the very first likely held by John Alden, the ship’s cooper, as he became the first the expedition to set foot on what would be American soil.  The arm he most certainly held was a short wheel-lock carbine, a piecemeal gun with an Italian made barrel and numerous small repairs to the stock, likely made on both sides of the pond. Today you can see this historic arm at the NRA’s National Firearms Museum:

It’s important to note that this would have likely been one of the most expensive gun’s to make the voyage to Plymouth Plantation.  Here’s a rundown of what most of the early settlers would carrying: 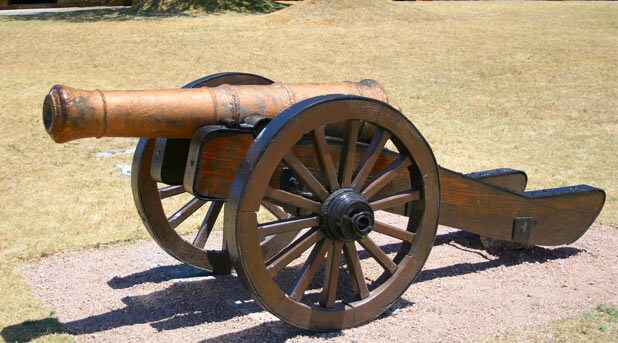 Of course they had cannons. However, historians aren’t exactly sure how big they were or what exactly they did with them. In all probability, they used them to ward of potential threats or attacks.

The Pilgrims were equipped with Blunderbusses, an early form of a shotgun, but at the time they were really expensive so it would have been difficult to buy a large number of them. With their short barrel and devastating loads they were great for hunting, but these muzzleloaders were often adapted for combat. They also used the innovative flintlock action.

Introduced in 1570, the Snaphaunce was an early form of the Flintlock. It used two main mechanisms and a rather complex system to set off the action.

When the trigger is pressed it releases the hammer, which has the flint attached to the head, and then the flint will strike a rough side of the flash pan. The flash pan, which covers and keeps the powder dry, then falls forward to allow sparks to drop into the pan. Hopefully the mechanism would create a powerful enough reaction to ignite the gunpowder. 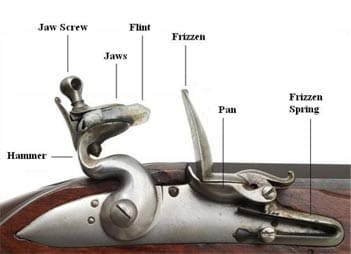 Despite its Spanish name, the Miquelet-lock was actually used by lots of folks all over Europe, Northern Africa and the Middle East, only it garners its name because the Spanish military or Miquelet trained and fought with the device regularly.

It may have a different look to it, like the more elegant hammer, but the Miquelet actually works similarly to the Snaphaunce.

Most of the settlers’ personal weapons would have been matchlock muskets. Pistols were expensive and this was truly the working man’s arm back in 1620.  The crude matchlock, meaning a match is used to light gunpowder, first appeared around 1450 in Europe. They require an arduous amount of work dealing with raw powder and a burning piece of rope. 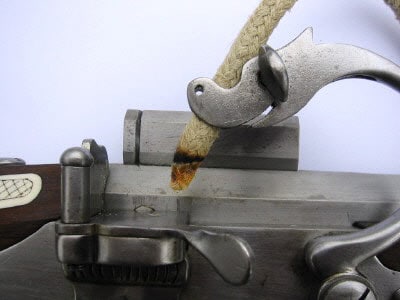 To use one, a person must pour powder into the pan, use a stick to push a ball down the barrel, and ensure the match (the burning piece of rope) was still lit before firing. The rope attaches to the hammer and then hammer drops into the pan, igniting the powder.

Although the ball would kill anything it hit, it also destroyed a significant amount of whatever it hit. The primitive matchlock was ultimately replaced with the flintlock.