Which is best for Squirrel Hunting: .22 Rifles or .410 Shotguns?

You ask any dedicated bushytail hunter which is the better gun when it comes to hunting his tree-hugging quarry (okay, we’re talking about squirrels here, no hippies), shotguns or rifles, and you can find yourself in an argument the likes of which you have never seen before. I have heard the debate myself since I was a kid, and each has its points, and each has its detractors, as they say.

I cannot tell you how many times as a teenager I heard that the ideal first gun was a .410 shotgun, and how many squirrel potpies over the years they have helped make. This is true: the .410 is a fine gun especially early in the season when there are still a lot of leaves on the trees. The .410 is tough at short ranges, but is useless as distance increases with maybe fifty yards being the very upper limit.  Then again, rarely will you ever have to take a shot much longer than that in thick brush.

Although I always found this advice to be sound enough, my first squirrel gun was not a shotgun, but a Ruger 10/22 rifle. My first time out I shot three squirrels all from a few different ranges but none more than thirty yards. I soon found that I preferred the precision of a .22 rifle to the shotgun.

One of the reasons I stuck with the rifle over the years, along with the occasional diversion to handguns, is that with some standard velocity loads I can take out a squirrel without some of its acorn munching brethren taking too much notice. I also found that I really didn’t like the idea of the occasional stray shot pellet ending up in my dinner, a problem you don’t get with a .22 rifle.

Another reason I never really cared for the .410 is the cost of a box of shells. While all ammunition has gone up over the years, a box of .410 shells compared to a brick of .22 Long Rifle isn’t even a real comparison. A brick of five hundred .22 Long Rifle rounds averages out in most cases to $20 or so, while just twenty five .410 shells cost more than $10. 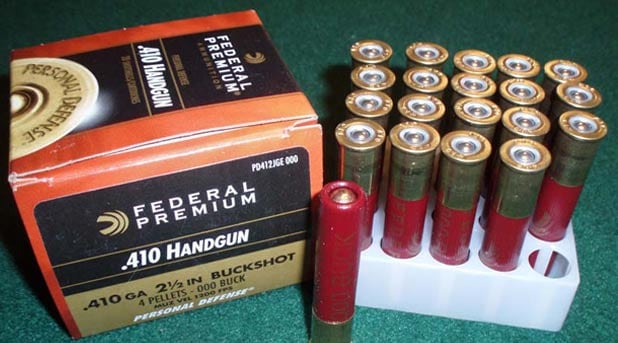 Still the .22 also has its share of issues, too. In close quarters where you don’t want to take chances the .410 is ideal, especially with some of the woods shrinking in size. The last thing you want is a 40 grain bullet going where you don’t want it to go. This is where the .410 still shines, and for the beginner or youngster it might not be as cost effective as your favorite .22, but they might bring home more game with his .410 than the .22 rifle—which is of course essential to getting newcomers to stick with hunting. Frankly, a lot of the old timers knew this as well and carried some of the old Savage or Stevens combination guns with a .22 and .410 barrel.

So which is better? Well that depends on the shooter and the situations. A young hunter is probably best served with a .410 especially as a new recruit in the woods. It also a smarter choice if you are in a smaller woodlot where you might not want to risk a miss with a .22 Long Rifle.

The .22 rifle is at home in the hands of someone with a few seasons of squirrels under there belt and can hit those smaller targets. Not saying that there are not some youngsters out there who can’t get the job done with a rifle, I’ve met more than one, but experience is the best teacher. A squirrel is not a large target, and more often than not you are aiming for either the head or the vitals and at fifty yards out that is a might tiny spot to be threading a needle.

So in closing, really, no matter which of the two you choose, both of these long guns, with their easy recoil and lower cost, go a long way to ensuring that squirrel hunting is a lot of fun. It’s not like filling the freezer with venison, but they are tasty all the same and one can amass quite a supply if you spend some time in the woods.  Additionally, the practice will help you increase your marksmanship on those bigger targets you are likely to encounter later on.