One is the most popular revolver cartridge in the land, dealing double duties as both a premier personal defense and hunting round, while the other has served the American military through four wars, countless skirmishes and—let’s just call a spade a spade here—set the bar by which all other semi auto pistol cartridges are to be judged.  I am of course referring to the .357 Magnum and the .45 ACP.  Question is, out of these two titans, which one has the nuts?

The .357 Magnum was introduced in 1935 and law enforcement agencies almost immediately sought its services as the fastest and flattest shooting round on the market. In fact, the first Registered Magnum was sent to none other than J. Edgar Hoover prompting most of his agents to pick up the hot new round for themselves. 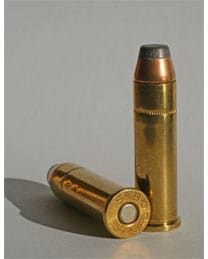 In those days the .357 was hotter than today, with a 158 grain bullet traveling at 1,500 fps (much faster than it moves at now in factory guise) it was nothing to sneeze at. By way of example, when tested Colonel Douglas Wesson tested the round out on an automobile, he wrote that “with the motor idling at high speed, one shot was fired through the hood from the Magnum, and the engine was wrecked. So much so, in fact, that it was impossible to turn it over even with the hand crank.”

The .357 Magnum stayed at the top of the heap in the personal defense market for a very long time.  However over the years the guns and loads got lighter as shooters found the recoil in some combinations could be a bit stout. Eventually shooters (and their hands) became more inclined to shoot tamer .38 Specials out of their .357’s and from then on it was only a matter of time before the wild adolescent round slid into calmer, lukewarm adulthood. Today, because of these changes, the .357 is out of the picture for the law enforcement though to be sure it still packs a wallop. A .357 may be the best all-around handgun hunting round out there and time and again proving it can get the job done on deer just as well as varmints.

One great advantage to the .357 (and one alluded to above) is that shooters (and beginning shooters) can practice with lighter, cheaper .38 Specials, while there is no such “starter round” for the .45 ACP (buy a pistol chambered in .45 ACP and you’re stuck with it).  I can also tell you, for most if not all the .45 ACP is not a great beginners’ caliber, especially in the smaller pistols though I have watched shooters struggle with it even the larger framed guns like the Glock 21.

In 1911, Colt and John Browning brought out the most recognizable pistol in history.  And it was chambered in .45 ACP.

In only a few years, the 1911 Government Model would prove itself on the battlefields of Europe in one war after another. With its 230 grain FMJ bullet, the round dwarfed all other handgun cartridges shot during these conflicts and when fired from a Thompson submachine gun it proved downright deadly in close quarters. 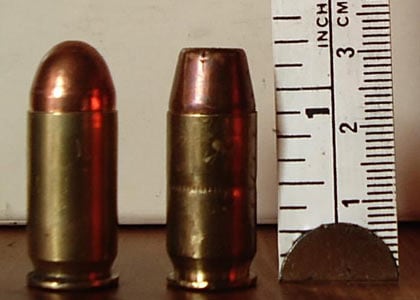 For over one hundred years the 1911 design has been tinkered with and improved upon in darn near every way imaginable but the gun would never have made a century without the .45 ACP to back up its legend. Even after the American military abandoned the round, it still didn’t lose popularity and, in some circles, .45 ACP is still preferred over the Beretta and the 9mm.

One of the advantages the .45 ACP has over the .357 Magnum is that it works well in high capacity pistols like Glocks, Sig Sauers, Heckler & Kochs and the like, where as the .357 is stuck in the revolver world (with the notable exceptions of guns like the Coonan and the Desert Eagle). In the terms of raw, stopping power, the .45 ACP remains one of the all time greats, especially when coupled with a 125 grain JHP.

But these assets also pretty much pigeonhole the round into self-defense applications.  The .45 ACP cannot be relied on to bring down medium sized game animals like deer where as the .357 Magnum (with the right bullets and load) is a renowned deerslayer. The .357 can also take small game.  The large diameter .45 can do this as well, as long as you really don’t want to eat what you shoot.  At moderate ranges it can take coyotes or other larger varmints but as an appropriate “out in the woods” round, this is pretty thin.

And the winner is… 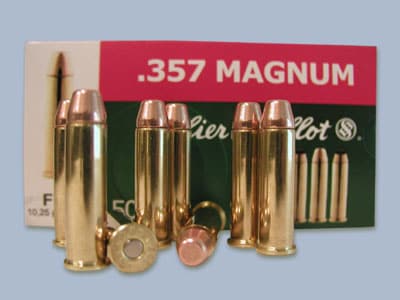 I have shot both extensively over the years and if I had to stick with one of the two, I would choose my .357 Magnum.  I need a round that I can hunt with too and when you look at the reality of shooting in 2012 America, I’m really not giving up a lot in ammunition capacity by going with a revolver. The laws here in New York limit the magazine capacity to ten rounds (not to mention a good number of states do not allow hunting with semi-automatic handguns, period) and if you go with a standard 1911 in .45 ACP with a seven round capacity you are only getting two more with one chambered. Consequently, I don’t at all feel undergunned carrying a revolver with six rounds of .357 Magnum ammunition.

I think the takeaway here is that even though these are both great rounds, I chose “the better” round based on my intended use for the gun.  This should be the driving factor whenever it comes to picking a caliber—the question, what am I going to use the gun for? The .45 ACP has had a long history of personal defense, but unfortunately for my purposes that is where its use really ends.  The .357 Magnum on the other hand does this job and that of a game getter as well. In the scope of my existence, the .357 really is hands down the better of the two (properly loaded with the right bullets that is!).

David choose the caliber that best fit his needs, namely a hunting round, though one with obvious self-defense value.