World War I was often noted for insane stupidity, mindless trench warfare, millions of casualties suffered in senseless frontal charges against machine-gun-defended barbed wire trench emplacements. So the periscope rifle in its own way fits right in. It was just as dumb.

In theory, it seemed a good idea. Using a periscope device, a mirror encased in a jury-rigged housing and mounted to a Lee-Enfield rifle, the shooter could lift the rifle up over a trench, and looking through the periscope, fire it at a target without the shooter exposing themselves.

The chance you would hit anything by firing at an enemy trench with what amounted to an angled, trick shot, was minimal at best. Doren Cart, senior curator for the National World War I Museum in Kansas City, agreed that periscope rifles were seldom effective.

“Even if they had been, they weren’t produced in enough numbers,” he said. “It was a very specialized kind of mechanism, using a telescopic sight with fitting devices. The trigger had to be lined up. Since the rifle (Lee-Enfield) was a bolt-action, after a shot it had to be brought down, re-cocked and put back up atop the trench. 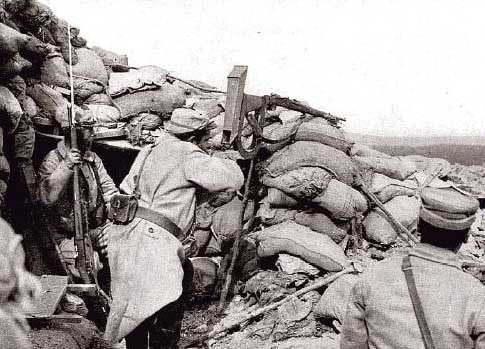 “It was not for rapid fire,” Cart added.

Snipers were present along the Western Front, but these were well-hidden marksmen using regular, direct telescopic sights.

Infantry soldiers, many of them only average shots, tended to use the periscopes. Rather than inflicting any real casualties, such guns may have been more effective as morale boosters. They helped soldiers stuck in the hopeless quagmire of static trench warfare get through the quiet moments between artillery barrages.  It helped them to feel like they were taking some kind of action against a nearby but mostly unseen enemy.

Even though it was used in France on the Western Front, the battle most associated with the periscope rifle was the Gallipoli Campaign in Turkey in 1915, with images disseminated across the globe from photos of soldiers using it were taken here. At Gallipoli, poorly-led British, Australian and New Zealand (ANZAC) soldiers failed to take high ground quickly after an amphibious landing on the Dardanelles and were pinned down by Turkish troops on the cliff heights above.

The battle degenerated into the same kind of bloody, no-win trench warfare seen on the Western Front, until the Allies finally gave up and ended the fiasco, withdrawing nine months later. 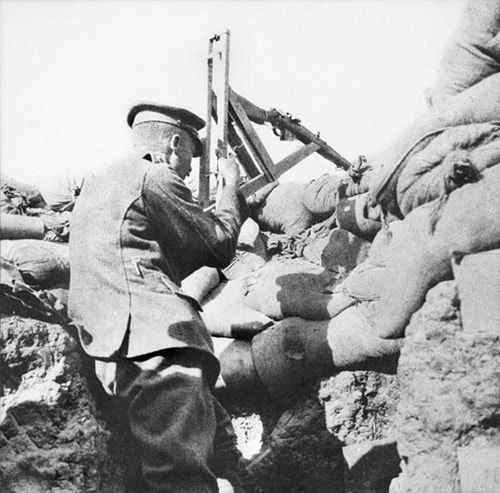 The periscope rifle was perfected at Gallipoli by an Australian soldier, Sergeant William Beech of the 2nd Battalion, Australian Imperial Force (IMA). Beech altered a Lee-Enfield .303 British by connecting its stock to a board and installing a mirror periscope, horizontally aligned to the sights of the rifle. A string was used to pull the trigger.

Australians suffered more casualties at Gallipoli than their British counterparts, and though the battle is hardly known to most Americans, it is observed as a national holiday remembrance (ANZAC DAY) in Australia.

There is a photo of Beech posing with his crude contraption next to a cluttered Gallipoli parapet. His invention was just a prototype. Improved combinations of the periscope rifle were developed during the war, but they had little impact on the outcome. 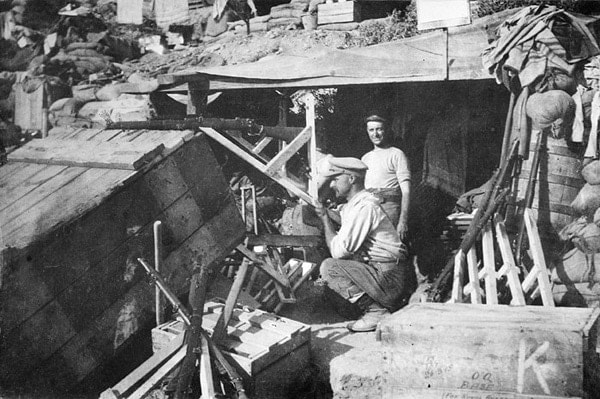 “The periscope device was more effective on a machine gun because of its rapid random spray of fire,” Cart said.

Use of a periscope on a machine gun was rarely attempted, perhaps because it was already the war’s deadliest killer after disease and artillery.

Cart said the National World War I Museum has exhibits and artifacts including weapons, uniforms, documents, posters, equipment and other memorabilia from all combatants in the conflict.

“We even have a rare French two-man FT-17 Renault tank that was hit and disabled in no-man’s land,” he said.

“Some of them have seen the recent movie War Horse,” he said. “We’re busy getting ready for the Centennial 100-Year observance of the conflict in 2014.”