Who would have guessed a remote former royal palace in Nepal would house one of the largest caches of antique Western rifles ever found, but such was the case when researchers unearthed firearms over 200 years old at Lagan Silekhana Palace in Katmandu in 2000.

Of particular interest, 55,000 vintage 1879 Martini-Henry rifles, the very same rifle that a handful of British troops used to turn back over 4,000 Zulu warriors at the Battle of Rorke’s Drift in South Africa in 1879 and many of these in superb condition considering their age. 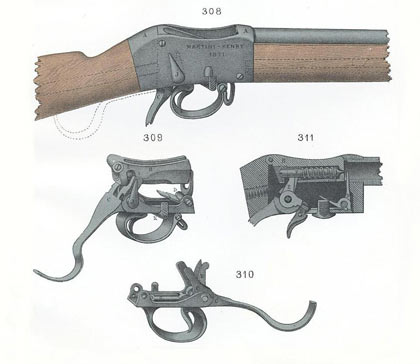 A breech-loading, single-shot lever-operated rifle, the Martini-Henry was the mainstay of the British Colonial Period, the rifle used to hold native populations from India to Africa to Asia at gunpoint. The design came out of burgeoning improvements in technology made during the American Civil War, a conflict closely studied by British and French observers.

“The Civil War brought together a lot of talented gunmakers and created many good ideas for firearms improvements, but some of these improvements couldn’t be made before the war ended,” Cranmer said. “Henry was a Scot, Martini, Swiss and the Martini-Henry rifle was among the best of its day. It played a massive role in the subjugation of peoples in India and Africa.”

Inventors Alexander Henry and Friedrich von Martini developed the rifle and in 1871 it entered military service, replacing the outmoded Snider-Enfield. The rifle remained the standard weapon of the British Army for 30 years, not officially phased out until 1904 and even after it became “obsolete”,* it was still being used by colonial allies of the crown well into the 20th century—Henry-Martini’s have even been captured by U.S. Marines from the Taliban insurgents in the current war in Afghanistan.

Weighing over eight pounds and with a length of 49 inches, the Martini-Henry’s lever action was incredibly innovative for its day. The lever worked a pin that propelled a tumbler, acting on the block, into the case. The tumbler’s movement was bound by a notch in the block, raising it into the firing position or allowing it to fall into position for extraction.

The rifles fired a .577/450 Boxer Henry cartridge with an effective range of 400 yards and 2,000 yards maximum (most likely due to Henry’s patented heptagonal barrel with a one in 22-inch barrel rifling). Because of its clunky extraction system, its rate of fire was about 12 rounds per minute.  Later designs became popular among big Game hunters in Africa and commercial versions remained available until the 1960s.  Recoil is said to be substantial considering the gun’s heavy weight. 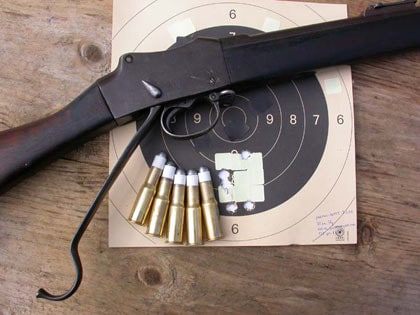 Most researchers (and soldiers) agree that the most accurate model was the second derivative made in 1879 called the Martini-Henry Mk2, though a carbine version, first created in 1878 and known today as simply the Martini Carbine or short lever version, could fire a specialized load containing a 415-grain bullet farther with more accuracy.

“We have about 10,000 British short-lever Martini-Henry’s of the kind used at Rorke’s Drift,” Cramer told Guns.com.

During WWI, the Martini-Henry Mk4, shot a spitzer-tipped incendiary bullet.  This model was usually given to airmen to shoot down the bomb dropping German Zeppelins that plagued London.

Also in the 1870s, a variant called the Gahendra rifle was built by local craftsmen in Nepal.  Though the Nepalese ended up actually developing a more sophisticated design than the Western Martini-Henry rifles, the guns were handmade (Nepal lacked the Great Britain’s industrial complex), meaning the quality of these highly collectible rifles was very inconsistent. Regardless, some 9,000 of them were still in service in Nepal up until 1906.

The Unites States even took a crack at making Martini-Henrys.  When the British refused to sell Turkey these rifles for use during the 1877 Russo-Turkish War, the Providence Tool Company in Rhode Island made and sold rifles identical to the Martini-Henry in design. Today these are called Peabody-Martini rifles.

But most likely the rarest variant was the Greener Prison Shotgun, developed for use by prison guards around the turn of the century.  The gun used a Martini action and only took highly specialized shotgun shells.  These specialized rounds were a primitive attempt at personalized gun technology—unable to fire anything else, the weapon was for the most part useless to anyone who stole it (say a desperate prisoner) unless they had its specific ammo. Examples are scarce though you can see one at the Royal Armouries Museum in Leeds in the United Kingdom.

Service in the British Empire

Though the gun saw service for over 30 years, the Martini-Henry Rifle is perhaps most associated with the Battle of Rorke’s Drift in the British Colony of Natal in Southern Africa

In January of 1879, a contingent of 150 British regulars defending a mission station against siege inflicted hundreds if not thousands of casualties on approximately 4,000 Zulu warriors by firing volleys with Martini-Henry rifles. For the performance history of these rifles the battle was in fact one of redemption: the action came on the heels of the Battle of Isandlwana, in which a British force of 1,800 soldiers had been virtually wiped out by the Zulus.  At the time, British officials placed part of the blame on the Martini-Henrys and its defectively fragile, rolled cartridge ammunition which tended to overheat, foul and jam the weapon (though most historians today point to poor leadership, tactics and numerical inferiority as the true culprit for the British defeat).

“The ammunition had brass foil, and it would jam the chamber of the rifle and the shooter had to pick the foil out,” Cranmer explained.

After the British loss, a stronger brass cartridge was perfected and a longer loading lever installed to apply greater pressure to the round. However, 100 percent reliable shell extraction wasn’t achieved until copper-coated cartridges became widely used in the 1920s. 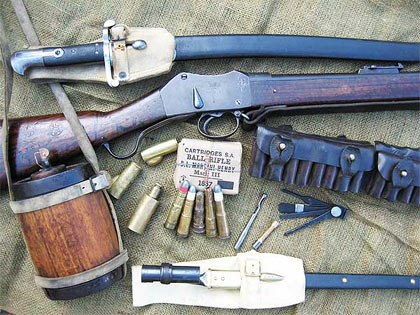 “It was a treasure trove,” Christian Cranmer, owner of International Military Antiques (IMA) in New Jersey, said of the discovery of stockpiled rifles. “Overnight, we became the biggest owner of these types of rifles.”

The US-based group, International Military Antiques (IMA), purchased the rifles for approximately $5 million in 2004, though the deal to acquire the guns was finalized in 2003 in Kathmandu, the capital of Nepal.  How the cache came to end up in Nepal is a matter of speculation, though the country’s one time protectorate status under the Crown was more than likely the source.  During the age of the British Empire, Nepal was an independent state under British influence rather than explicitly a colony. We know from documents that, during a public visit by British King George V in 1912, the king was alarmed to find his Nepalese allies still using the Martini-Henry rifle in large numbers.

“The king insisted on supplying them with the more modern Lee-Enfields,” Cranmer said. Presumably, the Martini-Henry rifles were stored after the delivery of the updated guns and forgotten.

The sale (and the price) created controversy in Nepal, with the prevailing attitude appearing to be the government got skinned on the price.  Money was needed to equip the Nepalese military with modern weapons to fight Maoist terrorists during a civil war in that country that lasted from 1996-2006 and the government made the decision to sell what many in the country believed to be a priceless collection of guns in 2000.

During a break in the fighting, Cranmer journeyed to Kathmandu to a former 16th century palace of the Nepalese Royal Armory at Lagan Silekhana where the historical firearms were found. In addition to Martini-Henry rifles, the horde included 180 brass cannons, numerous bayonets, musket flints and balls, and kukris, Nepalese curved knives.

All of it totaled 430 tons, 31 tractor-trailer loads.  It has been called the greatest single discovery of antique firearms in modern history. The weapons were brought back to Gillette, New Jersey for restoration, where they reside to this day and are available for purchase.  Prices vary widely from less than $200.00 to well over $1000.