Brought to You By GE: The M134 Minigun

With hundreds of years of military strategy based on (and countless lives needlessly lost) lining up soldiers in formation and having them fire in sync, it would seem that from the beginning of fire-armed conflicts, people have been interested in achieving overwhelming and sustained firepower to eradicate their enemies.

By the mid-1800s, the world’s first rotary cannon, the Gatling gun, blew Industrial age minds with a rate of fire of about 1,200 rounds per minute but it wouldn’t be until the 1960s that General Electric would bring the world a weapon so effective at putting a large number of rounds on target, its very name would become synonymous with any externally-powered rotary gun of rifle caliber.

That gun is the Minigun M 134, a weapon still in service today and believe us, there is nothing Mini about it. 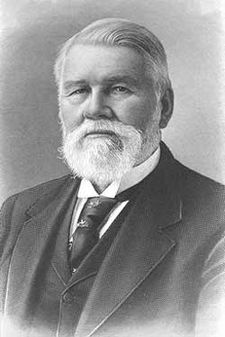 Dr. Richard J. Gatling first invented this radical style of weapon in the early 1860s.  The first model Gatling Gun was a hand crank affair with an erratic rate of fire, paper cartridges and a strange fibrous material stuffed in spaces between the gun’s six barrels.  This material could be soaked in water as a means of cooling the barrels (albeit an ineffective one). Subsequent models quickly did away with the matting encased barrels as it actually caused them to shoot hotter and also made the switch to brass casings.

The first models were gravity fed with a hopper though by 1881, Gatling guns used a Bruce style system to chamber .45-70 rounds.  It took about four men to operate the weapon in combat.

By 1876, the Gatling gun could fire 1,200 rounds a minute on paper but, because the device was hand cranked, it was not a true automatic weapon. 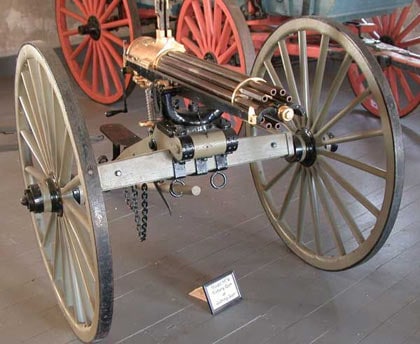 When coupled with a regulating electric motor around the turn of the century, the gun became an executioner, able to lay down 3000+ rounds a minute. This tripled the lead output of any conventional machine gun of the era, but most importantly featured a cyclic multi-barrel design which facilitated cooling and synchronized the firing/reloading sequence.

Each barrel fired a single shot when it reached a certain point in the cycle, after which it ejected the spent cartridge, loaded a new round, and in the process, cooled down somewhat prevented barrel overheating—which had always been the limiting factor in terms of firepower.

Gatling was the first to solve this problem satisfactorily.  His US Patent in 1893 secured exclusive rights to motorize his multi barreled invention and the weapon was resurrected and for decades reigned supreme as the US Army’s most trusted source of heavy firepower.  Ultimately though, a myriad of improvements to gas and recoil machinegun systems would overtake the outmoded Gatling gun.

Everything Old is New Again 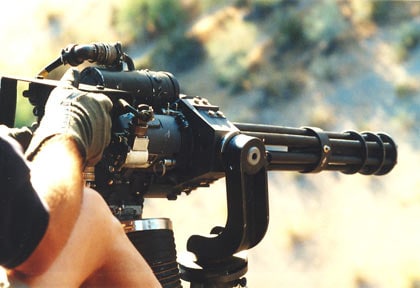 In the 1960s, the phrase ‘everything old is new again’ emerged amid a war in Vietnam to become the catalyst for the rebirth of Gatling’s old weapon.

The transformation of the Gatling gun by General Dynamics, the armaments division of General Electric, was instigated by the Vietnam War. Dissimilar to any previous US conflict, the principal mode of transportation for troops in and out plus equipment was the helicopter. These helicopters were manufactured from aircraft metal, with no belly armour to absorb ground fire and, in ‘Nam they got shot at constantly, usually when landing to pick up the wounded. In consequence, arming choppers with effective defense weaponry became a top priority for US military brass.

General Dynamic’s engineers looked not to the older Gatling guns but instead to recently conducted experiments with their own M61 Vulcan when considering a proper rotary cannon for helicopters.  Seeing the effect of bombing raids and air drops had in WWII and the potential of aerial vs. ground combat,  the US Army turned its attention to developing a large caliber, high rate of fire aircraft gun.  The result of the 1950s M61 Vulcan, firing 20 x 102 mm cartridges at a rate of over 4,000 rpm and first installed on F-104 Starfighters.

On the new rotary cannon, GE engineers scaled down the multiple barrels of the beefy 20 mm Vulcan cannon but not the dimension of the weapon and engineered the barrel sleeves for 7.62 x 57mm NATO.  The supplementary bulk absorbed the higher rate of fire comfortably, the ammo feed was stabilized and the lethal M 134 Minigun was born.

I Shall Call it Minigun 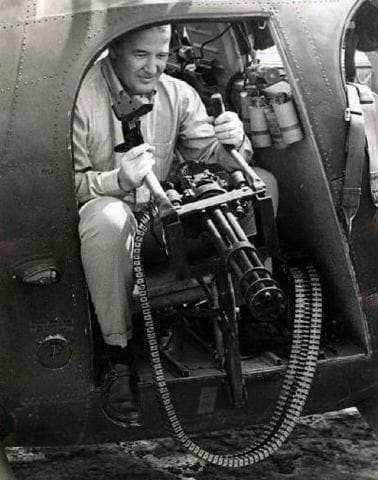 The “Mini” of the name is in comparison to designs that use a similar firing mechanism but larger shells, such as General Electric’s earlier 20 mm M61 Vulcan, and “gun” referencing the delineation between a cannon, that of a caliber higher than 20 millimeters—and gun—within certain ranges.

The M 134 was designed to be heavy, durable and permanently mounted in aircraft gun pods, helicopter doorways and patrol vessels decks. Like turn of the century Gatling guns, the M 134 requires an external power source to enable the weapon to lay down its enormous firepower and use a cyclic configurations multiple barrels solve the very real problem of overheating.

For an individual user there is nothing Mini about the weapon and though the gun bears a striking similarity to the Browning machinegun carried (one handed) by Arnold Schwarzenegger in the second and third Terminator movies, the real thing would prove incredibly difficult for even a body builder to wield portably in battle (though definitely not for Cyberdyne Systems T-800 Cyborg).

Heavily borrowing its cooling features from Gatling’s late 1800s designs, the gun’s multiple barrels ensured no one barrel would overheat from sustained firing, but it was also this very configuration that made this sustained fire possible. Unlike the original Gatlings that dropped a single cartridge into each carrier groove upon rotation, loaded the cartridge by using the cam to push the lock forward, fired the round when the cam hit its highest point and freed the lock and then dropped the spent casing out of the barrel as the cam continued its revolution, all from roughly the same position, the Minigun’s process of firing/extraction/loading takes place in all barrels simultaneously.

The power source (variants have used electric, pneumatic, or hydraulic power sources and a gas-operated derivative was pondered but never developed) drives six closed-bolt rifle barrels fixed in a circular housing. As one barrel fires, two others are in different stages of shell extraction and the other three are being loaded. While the weapon can feed from linked ammunition, it requires a delinking feeder to strip the links as the rounds are introduced to the chambers. 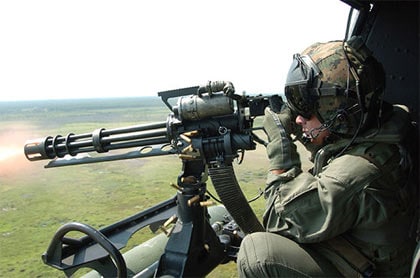 In any country if there was enemy fire from an HLZ, this weapon evened up the fight quickly.  If a full gunship armed with the M 134 Minigun cleared the area, stand back, they turned the jungle to mulch. This new weapon could now fire up to 6,000 rounds per minute and was installed in the helicopter fleet but most noticeably in the gun pods on AH-1 Cobra attack helicopters and a new configuration in gunships.

The legendary AC-47 Puff the Magic Dragon Gunship was armed with the Air Force version of the M 134 and rained incendiary cover for prolonged periods.  Originally a cargo plane, the C-47 could carry a 2000 pound payload of ammo and keep a landing zone clear for hours.

The various wings of the Armed Services have their own specific designation for their current version of the M 134 Minigun in. GAU-2B/A is the Airforce and M 134 the Army version with a subsequent Navy variant GAU-17/A.

The Secret Service owns several Suburbans equipped with Miniguns, including one hiding Dillon Aero’s version the M134D that guards the Presidents Motorcade.