Special: Beretta during WWII: Submission and resistance to Axis powers

Beretta’s headquarters has been located in northern Italy for several centuries, which, by default, put them in the middle of some very serious world conflicts and not all of them have been on the right side.

During WWII, for example, they made weapons for the fascist Italian army, but what many may fail to realize is that they also made them for the Allies.

I was having lunch with a friend awhile back and we were talking pocket pistols.  I waxed poetic about the Walther (an aesthetic that I love) and he grimaced.

He said it wasn’t that he had a problem with the company’s guns or quality—in fact, he likes the PPK and respects the tenacity of the .380 round—but he did have a problem with Nazis.  I mean, say what you want about the tenants of National Socialism… My friend won’t carry a PPK for the same reason my father-in-law won’t drive a Nissan—it’s a familiar sentiment.

So how is it that the $75 million contract to produce the M9, the emblematic sidearm of the United States military, was awarded to an Italian company with ties to both the Fascists and the Nazis?

It’s all over the Internet, so it must be true, right?  The M9 is made by a foreign company that used to be our enemy.

Well, not really.  I know it is hard to believe, but the Internet has some of its facts a bit misaligned. 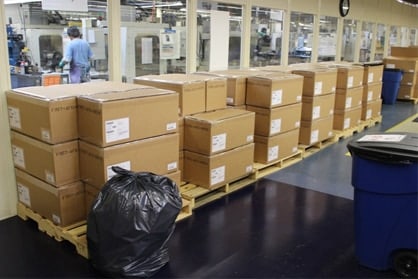 Allow me to set the scene.  I’m touring the Beretta factory and I see pallets full of M9s boxed and awaiting shipment to Afghanistan.  The irony struck me, so I thought I would ask how the company handled its rather embarrassing legacy of Axis support.

During The War to End All Wars, Italy sided with England, France and America.  Beretta supplied Italian troops with lots of fighting guns.  And that’s fine because those guns weren’t pointed at us.

But The War to End All Wars didn’t end all wars.  World War II was a different story.

Back in the early part of the 20th century, Beretta was run by Pietro Beretta.  He was, by all accounts, a genius businessman.

Under his leadership, Beretta built a hydroelectric plant on the Mella River in Gardone Val Trompia (Brescia, Lombardy, Italy).  The Berettas even built a hidden tunnel of water, complete with a spare turbine) that ran through part of the mountain, just in case.

In fact, Beretta had more tunnels.  The Italian factory is in a valley between some pretty steep mountains.  Before the outbreak of the Second World War, machinery was moved out of the factory and into the mountains to protect it from the raids that the family knew would be imminent.

Though the company took precautions, it wasn’t immune from the war.  Beretta, despite a liberal political stand in opposition to fascism, was obliged to make weapons for the Italian troops.  That’s how it happens under fascist regimes.

But this is where the Internet gets its facts a bit skewed.

Italy wasn’t entirely stable—much less unified.  The Partisans, Italian rebels opposed to the fascists, fought in many disparate groups the way freedom fighters did across Europe.  Many of the Partisans were equipped with Beretta rifles and pistols (and probably some exquisitely engraved sporting shotguns, as well).

While production in the factory filled orders for the fascist government, production continued in secret to support the Partisans.

The problem was so bad that the German SS took over the factory in 1943 to ensure that production continued.  As R.L Wilson writes in his epic history The World of Beretta, “Pietro and his sons Ier Giuseppe and Carlo were under constant suspicion…” Carlo was even jailed, and “awaiting transport to an extermination camp.  Only his importance to continued production saved him.”

Still, the resistance continued.  Eventually the Germans took Pietro Beretta as a hostage, hoping that his imprisonment would ensure that the rest of the family behaved.  But it backfired.  The Partisans, incensed by Pietro’s imprisonment, raided the town, the German camps, and the factory.  The raid was successful—the Partisans freed Beretta and took 50 prisoners.

Why the Allies let Beretta stand

There is some question about the American complicity in allowing the factory to continue production.  While I was visiting Beretta, Matteo Recanatini, Beretta’s web and social media manager, related another side of the story.  It seems that orders were given to bomb the factory—but the orders were rescinded before they were carried out.  Someone questioned the wisdom of destroying a 450-year-old company that was supplying the Partisans with weapons.

What fighting and bombing did take place in Brescia left its mark on the factory, but didn’t finish Beretta.  When the war was over, the self sufficient plant was able to resume the production of shotguns and emerge as a leader in European sporting arms.

Most of us in the USA take our national identity pretty seriously.  I had five uncles who served during the WWII.  One flew 50 missions in a B-17—many over this area of Italy.

Now I own a Beretta 92FS that was made in America.  Weird.  And cool.

The Beretta family can trace its corporate lineage with its familial line for more than 500 years.  They’ve seen a lot of politics in that time.

And now, like everyone else here on this continent, Beretta has a distinct American identity.  The M9, and a lot of Beretta’s products, are made in America.  In an era of economic depression and industrial exportation, Beretta is creating jobs here in Maryland and Virginia.

The family is Italian, but the team building these guns is as American as it gets.