Major General Ambrose Burnside was known more as an industrialist turned politician (and for his distinctive facial hair) than for his military aptitude during his turn as a Union Army Officer (or even in his more esoteric role as the first President of the NRA), but while posted in Newport, Rhode Island in 1853, General Burnside would draft sketches destined to become one of the most popular carbines of the Civil War, the Burnside Carbine—a rifle that would speak to military talents he never possessed.

In 1853, Burnside found himself stationed at Fort Adams in Rhode Island, serving out what he believed would be his last detail of a storied albeit undistinguished military career (it wouldn’t be).  Possibly looking for ways to pass the time, Burnside began sketching designs for a .54 Carbine design and by the end of the year personally requested and received permission from the Secretary of War to work in stride with Springfield Armory on developing a working prototype of his new rifle that would solve the problem of burning gas leakage in breechloading rifle systems.

A breech-loading, single shot percussion fired carbine, the first generation Burnside rifle (also called the Bristol rifle after the Bristol rifle works) used a tape-primed system behind an external hammer and can be immediately identified as they lack a fore-end specifically designed cartridge and used five groove rifling as opposed to six grooves.  Chambered in .54 caliber, the rifle was about 40 inches overall with a 22-inch barrel (yes, that was a carbine back them) and weighed almost seven pounds empty.  A pair of trigger guards operated the guns action like future lever guns and allowed shooters to load a single, specially designed cartridge at a time.

The system proved to be a vast improvement on rifles of the day, especially in that it (sometimes) addressed the issue of gas-leakage from the breech which would be the death of the Burnsides’ breechloading precursor, the Hall rifle.

To solve the problem of leaking gas, Burnside developed a strange cartridge to go along with his new carbine.  Little more than a wrapped foil and tapered cartridge, the conical shaped brass sealed the joint between the barrel and the breech. When a shooter pulled the trigger, the hammer struck a percussion cap, exposing a hole in the base of the cartridge to sparks.

Though it only worked “most of the time”, the Burnside carbine/cartridge combo presented an overall enhanced experience when put in the competition with other carbines of the era, with improved performance and accuracy.  The foil cartridges were replaced in the 1860s by a one-piece bell mouth casing with a circumferential groove just inside the mouth, waxed for lubrication.

Burnsides was an inventor, a businessman and a politician but not a gunsmith (or even a guy you wanted hanging around the plant according to many accounts) and, once he received substantial orders for his rifle, he realized his invention was not optimized for mass production.  This lead to very slow deliveries (some say this reputation would be the death of Burnside’s Bristol Rifle Works) and the need for someone with expertise in the discipline of gun making to streamline production; lucky for Burnsides, his invention intrigued a Master gunsmith from Massachusetts, George P. Foster who came to Providence to bail Burnside out of a manufacturing mess. 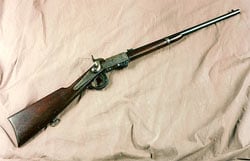 model variations debuting from the mid 1850s until the end of the Civil War and significantly refining the long gun (in the waning moments of the war, Burnsides factory was asked to abandon their flagship product and contracted to make the even more popular cavalry gun the Spencer carbine).  Alongside these ameliorations, George Foster thought he had struck a brilliant business arrangement with Burnside, believing that any improvements to the 1856 Patent on the .54 belonged to him alone (they didn’t, though Burnsides would relinquish his patents after his unsuccessful run for Congress in 1858).

Foster was indeed successful at getting the enterprise on a steady path.  He personally re-tooled many of the original gun components by hand, putting his masterstroke on what were sometimes crudely engineered parts.  He also worked alongside Burnside to create necessary revenue streams, including perfecting and manufacturing “limited runs” of the .54 carbine which allowed Burnside to eventually catch up with Army orders.

Today the some 200 known carbines handmade by Foster for a US rifle competition (also known as “Second Pattern” Burnsides because they were the second variation) are among the most sought after rifles by collectors.  These lacked the taped primer bur incorporated an improved breechlock patented by Foster in 1860 after the government testing.

The third model, which debuted a year later, strengthened the hammer and finally added a fore-end, though secured by a single iron ring.  The fourth model, sometimes called the Hartshorn type, made its first appearance just as the Civil War was starting to really heat up with the main improvement being a change form a singe swivel breechlock to a double pivot.  This opened the mouth of the chamber farther, allowing for easier loading.  The fifth and final version, sometimes called the Hartshorn-Bacon model, was the most heavily manufactured (some 44,000 were pieced together) and the most reliable because they incorporated a pin which tipped the breechlock automatically whenever the lever was closed (previously if you did not tip the breech before you closed the lever, the gun would jam).

With ‘his’ working model of the breech-loading carbine completed, Burnside resigned his commission to pursue a career in gun manufacture and formed the Bristol Firearm Company in 1854 with heavy investment from his new wife’s relatives.

The consummate businessman, it should be noted that when Burnside first designed his carbine, the gun not only complied with the requirements for acceptance at the U.S. Patent Office (which demanded a fully functional prototype) but also seems to have been drafted with the criteria for a forthcoming military field evaluation aimed at finding an improved cavalry rifle in mind. In that respect, Burnside may have been privy to this information while serving with the US military.  It is also assumed that the Army donated the first working model to Burnside in effect paying for the development of the rifle they would eventually have to buy in bulk from Burnside as war loomed.

To thicken the plot, Burnside had been producing and selling his carbines with incremental refinements 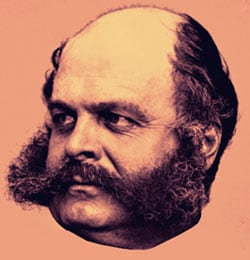 to the US Army before the patent was granted on his original design on March 25, 1856.  Today some may see this as questionable business as his gun could have easily been copied by other gunmakers, though others interpret these “patent pending” sales as a testament to Burnside’s confidence in his political connections.  Either way, the company’s reputation for slow work and insider knowledge would catch up with them in 1858 when it is believed a rival gun firm bribed Secretary of War John Floyd to break his contract with Burnside, leading to the General’s eventual financial ruin.

The Bristol Firearms Co. was re-organized in May 1861 and the outfit saw out the Civil War with quality production but their reputation for late delivery continued to dog them. By the end of the decade, the company was so far behind in Army contracts it was forced to close its doors.

In 1857, the Burnside Carbine was entered in a rifle competition at West Point against 17 other weapon designs.  It won hands down, though it would be a relatively slow seller up until the Civil War when it became the Calvary Armament of choice from 1863 until wars end and the third most popular overall.  Initially ordering over 50,000 rifles, the US army would ultimately buy a little over 65,000 Burnside carbines, specifically for US cavalrymen.

Burnside rifles saw continued use into the Indian Wars but were replaced by the Spencer as the 1860s became the 1870s and 80s (many of these were also built by Burnside). Union Army documentation today indicates that 43 Union Cavalry Regiments drew Burnside’s ordinance on a steady basis and, surprisingly, seven Confederate Cavalry units we at the very least partially equipped with Burnside Carbines, likely recovered from fallen Yankees.

On the collectors market, Burnside carbines usually go for a little more than $1000 though handmade “Second Pattern” models can go for many times that.

Many military scholars today believe that Ambrose Burnside rose through the ranks to become a Major General in the Union army largely because his carbine was so well known among troops. President Lincoln himself implored Burnside to take command of the Union Army of the Potomac despite the man’s repeated insistence that he was “not competent to command such a large army as this.”  The results, when he was eventually coerced into taking charge, were devastating for the North as Burnsides lack of leadership led to crushing defeats at the Battle of Fredericksburg and Spotsylvania Court House (where he likely faced forces armed with the very same guns he helped to design).