The SD is dead! Long live the SD! VE!

Smith & Wesson recently and quietly discontinued their SD line of striker-fired polymer pistols, 9mm Parabellum and .40 S&W handguns directly targeting the civilian market. Priced and featured in between the M&P service pistols and the entry-level budget Sigma series, the SD was popular with people looking for a compact service-style pistol at a lower price point.

The new SD VE is here to replace the SD, and it should have very little problems doing so. The SD VE is very similar, as in, extremely similar to the SD guns. If they weren’t a different color you’d be hard-pressed to spot the changes. 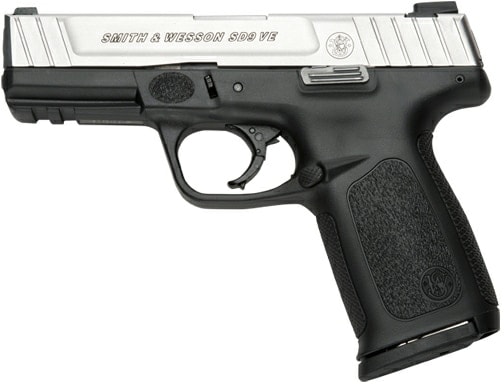 First up is the new slide. It is a satin-finished stainless steel slide, as opposed to the discontinued SD’s Melonite finish. We’re not opposed to two-tone guns and the SD VE comes across looking pretty sharp. The slide features plain 3-dot sights instead of the older models white dot rear, tritium vial front sights.

Everything else seems identical. The specifications are the same, the capacities are the same, and the features are the same. Like the SD, the VE is a polymer-framed striker-fired pistol available in 9mm Parabellum and .40 S&W. The 9mm versions come in 16+1 or 10+1, and the .40 caliber versions come in 14+1 or 10+1. They’re lightweight at under 23 ounces unloaded, but still have 4-inch barrels. They are 1.3 inches across at the widest point. They’re a good size handgun for nightstand duty or even concealed-carry with a proper holster.

The SD VE uses the same trigger, the SDT or Self Defense Trigger. A two piece design with an automatic safety, the SDT has a trigger pull of about 8 pounds, give or take a pound. It’s a smooth and consistent trigger with a somewhat long reset. Apex makes a spring kit for the SD that we suspect will have no problems dropping into the new SD VE, and we’re betting they use the same magazines.

They also appear to use the same frames, which are slender and have aggressive but not irritating grip texture. The SD VE should be easy for people with smaller hands to grip. It also keeps the textured finger pads on the side of the frame to positively reinforce trigger discipline with tactile feedback.

So what again, are the differences? We’re going to step on a pretty sturdy limb and say the differences we can be sure of are the absence of the Melonite finish and front night sight. While the two-tone look is easy on the eyes, both of these are cost-cutting measures. Which leads us to point out one more similarity between the SD and SD VE: the price.

Like the SD, the SD VE has an MSRP of $380. However, it is possible that the SD VE has a lower wholesale price, which could make this a more affordable option. But if they lower the price too much, the SD VE will directly compete against Smith & Wesson’s own Sigma, which is already one of the least expensive handguns made by a major manufacturer on the market.